Zach Osborne has taken a commanding lead of the 2020 Pro Motocross Championship. Last week, Zach had a -2 Race +/- and the positions he lost in each moto cost him -11 points. Race +/- is one of the best indicators of championships and a -2 Race +/- at Ironman was not an optimal day. He wants this title and that means he needs to maintain and improve position in every single moto throughout the entire season. This week, Zach did exactly that. He nailed 2 holeshots and led both motos wire-to-wire to take a +2 Race +/-. He now has a full moto lead (+26 points) in the championship.

Some other stats categories that Zach Osborne is leading…

In the 250’s, Dylan Ferrandis was once again the fastest rider on the track, but the veteran Jeremy Martin took both moto wins along with the overall and now leads the championship by +12 points. Interestingly, both Jeremy Martin and Dylan Ferrandis are the only two 250 riders with a perfect +8 Race +/-. They both have the most moto wins with 3 as well. The difference is that Jeremy Martin’s average first lap position is 3rd while Dylan Ferrandis’ is 14th and that’s resulted in Jeremy Martin winning 3 of the 4 overall wins. Check out the stats below for a note on Ferrandis ‘season of passing’.

Another Special All-Time Wins List
As mentioned on the NBC Sports broadcast, Jeremy Martin has moved into 6th on the all-time overall wins list for the 125/250cc class. While they compared him to Steve Lamson who won 19 of his 20 overalls on Honda, Jeremy Martin has won 11 of his 17 overalls on a Yamaha and the last 6 on his GEICO Honda. 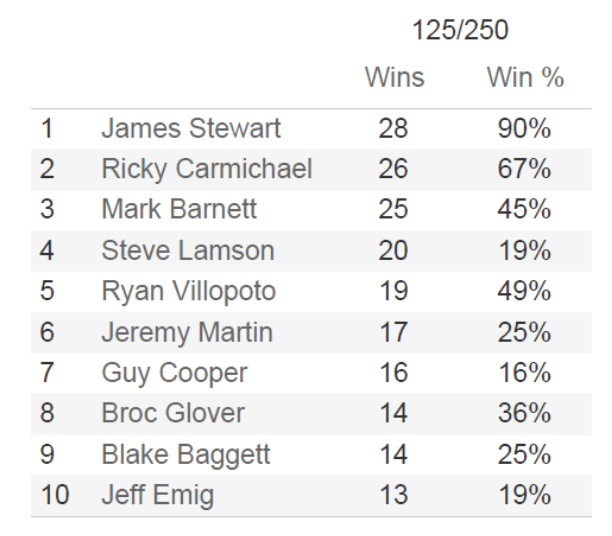 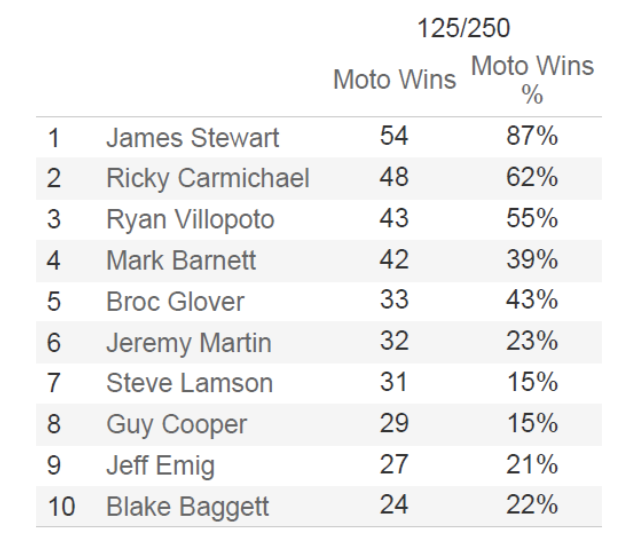 When’s the last time brothers finished a season on the podium?! Are Jeremy and Alex Martin the first potential to do it?!