Remember when we started the year with 4 different winners and it was the most stacked season ever!? Pretty amazing to look at the stats now and see just 5 different winners. Maybe even more profound is that only Eli Tomac and Jason Anderson have more than 1 win.

Sure, there was 8 winners in 1985 (Johnny O’Mara Broc Glover, Ron Lechien, Mark Barnett, Bob Hannah, Jeff Ward, Rick Johnson, David Bailey). There was also only 2 winners in 1996 (Jeremy McGrath, Jeff Emig) and 2001 (Jeremy McGrath, Ricky Carmichael). But these are outliers – rare occurrences in our favorite motorsport.

For a sport that’s mostly been considered a young mans sport, it looks like there’s a shift in the age of riders. Sure, there’s riders like Justin Brayton (38 years old) who’s still finishing in the Top 10 week in, week out. But he’s an outlier. He’s the exception, not the rule.

Being a data nerd, I wanted to find a stat that confirms the top riders are getting older. That it’s a trend. Guess what? I found it.

But looking by decade masks the relatively drastic change you see when you look at the last 7 years. Looking at it by year, you can see a steady increase in the average winners age. 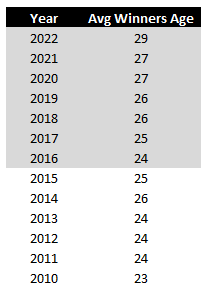 You can argue that’s simply following Eli Tomac’s average age, but you’ve got to keep in mind that Ryan Dungey, Ken Roczen, Marvin Musquin, Jason Anderson, and Cooper Webb have significant win totals during this time and their ages vary quite a bit.

So now the question is… why’s the winners average age rising? Is it because winning in a time of regimented training programs and a deep field requires more maturity, better racecraft that takes more years to build, and a better ability for a rider to setup his bike to perform more consistently at the top?

Hit me up with your theories @3lapsdown.