The original tweet above wasn’t what inspired the post but a response that said he should be signed cause he had scored the 2nd most points on the team. Problem = points are pretty useless in measuring a riders talent. Chiz may deserve a ride with Star Racing Yamaha but not because he’s scored a lot of points.

Points can be misleading (just like the filter used by the ladies for their Tinder profile). Take the 450 class as a perfect example. There’s at least 7 factory riders out injured. Ken Roczen, Dylan Ferrandis, Aaron Plessinger, Adam Cianciarulo, Dean Wilson, Joey Savatgy, and Shane McElrath are all sidelined. By default, that means every rider that used to finish 14th through 22nd is likely finishing about 8th through 16th – and scoring a lot more points.

Not taking anything away from these guys – anyone lining up for a supercross and hitting the whoops pinned is talented and has my respect -but when half of the Top 15 riders in the world are out injured, the 16th-25th best riders are gonna score a lot more points. But they’re still the 16th to 25th best riders. They didn’t just eat a special bowl of Wheaties and become the 7th best rider in the world (but how cool would that be though?!).

This measures how much slower everyone is relative to the fastest rider on the track. If the % Gap is getting smaller and smaller as the season progresses then the rider is getting better and better relative to the best. If the % gap is staying steady, it’s likely they’re not improving much or they are improving at the same rate as the best. If the gap % is getting bigger, it’s time to quit (just kidding – it’s just time to go back to the Bakers Factory or get a new trainer or for some go surfing).

Note I said Lap Time % Gap is better – there’s a lot more stats I use around lap and segment times to measure talent and potential but this one’s straightforward and a good starting point.

Let’s see what we can learn looking at Lap Time Gap % for the 250 East class in qualifying this season. This is the current Top 20 in points, plus a couple other factory guys. What do you… does Chiz deserve a Star Racing Yamaha ride? 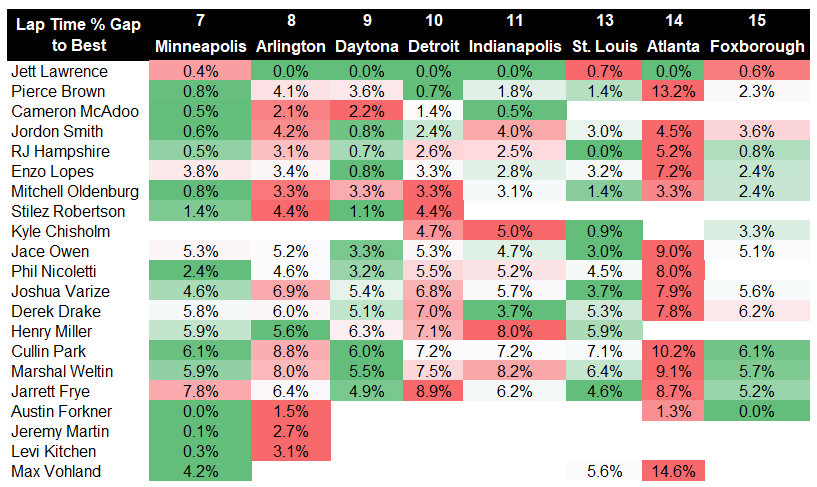 Here’s some takeaways from the data…

As for Kyle Chisholm, his last two rounds have been relatively big improvements from his first two rounds. So if you’re Bobby Regan, do you hire him to a 250MX deal for the summer?