For this edition of Classic Ink, we are going to take a look back at Scott USA’s innovative attempts to reinvent the motocross boot. 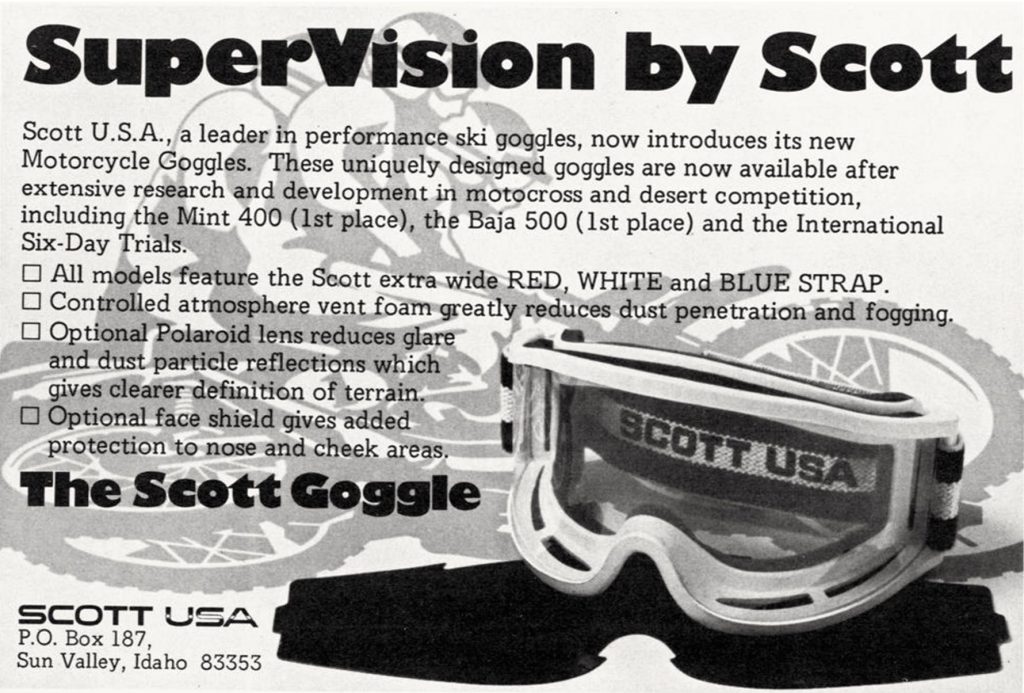 One of the great things about the sport of motocross is the willingness of its participants to push the envelope of technology and design. In the never-ending pursuit of greater performance, engineers, designers, and entrepreneurs within the industry are always trying to crack the code of the next breakthrough. Sometimes these innovations take hold and change the sport forever (rising-rate linkages, liquid cooling, and fuel injection), while others fizzle out as quickly as they appeared (boost bottles, 23-inch wheels, and Yamaha’s BASS). Some of this is due to the ever-changing and fickle tastes of the motocross buying public, and some of it is down to the simple fact that not every innovation is an improvement. 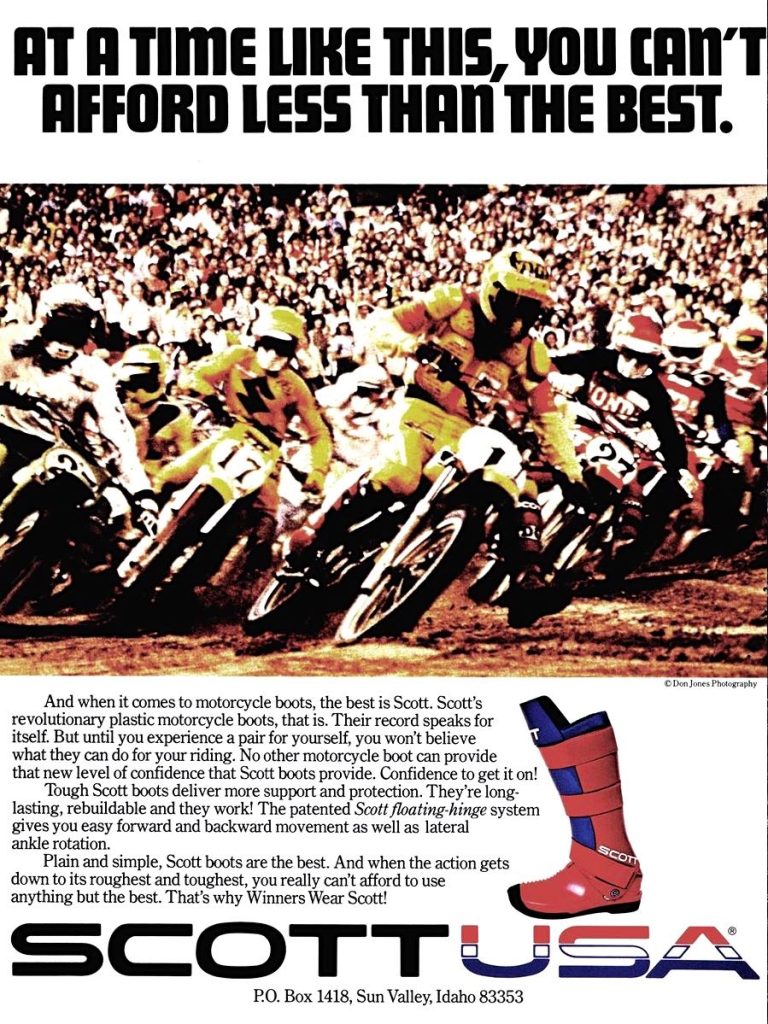 Scott’s new plastic boot was packed with innovation, but its ultra-stiff construction and unique feel proved polarizing to many. Photo Credit: Scott USA

Over the last fifty years, motocross gear design has changed just as dramatically as the machines have. Open-face helmets, leather pants, and cotton jerseys have given way to MIPS-equipped full-face helmets, synthetic pants, and ultra-breathable jerseys. These innovations in materials and design have made the gear we wear safer and far more comfortable. While most of these changes have provided a notable improvement in comfort and performance, not every advance has proven to be a knockout success.

A pioneer in the ski industry since the late fifties, Scott USA moved into the motocross world in the early seventies with a new “Supervision” goggle that leveraged their years of skiing experience to provide a goggle with superior comfort and improved ventilation. This new foam-ventilated google proved a tremendous success and Scott USA quickly became one of the premier goggles on the motocross circuit.

With their skiing roots, Scott USA also had ideas on how to improve the safety of motocross boots. At the time, most motocross boots were fairly simple in design with an all-leather construction that provided a great feel but very little ankle support or protection. In 1974, Swiss boot manufacturer Heckel had introduced a plastic boot, but it had failed to catch on with the buying public. Scott’s idea was to leverage their ski boot experience to produce a plastic boot that could combine the feel of the leather boot with the superior protection of plastic. By using a floating steel hinge, rubber sole, and polyethylene outer construction, Scott believed they could create the ultimate motocross boot. 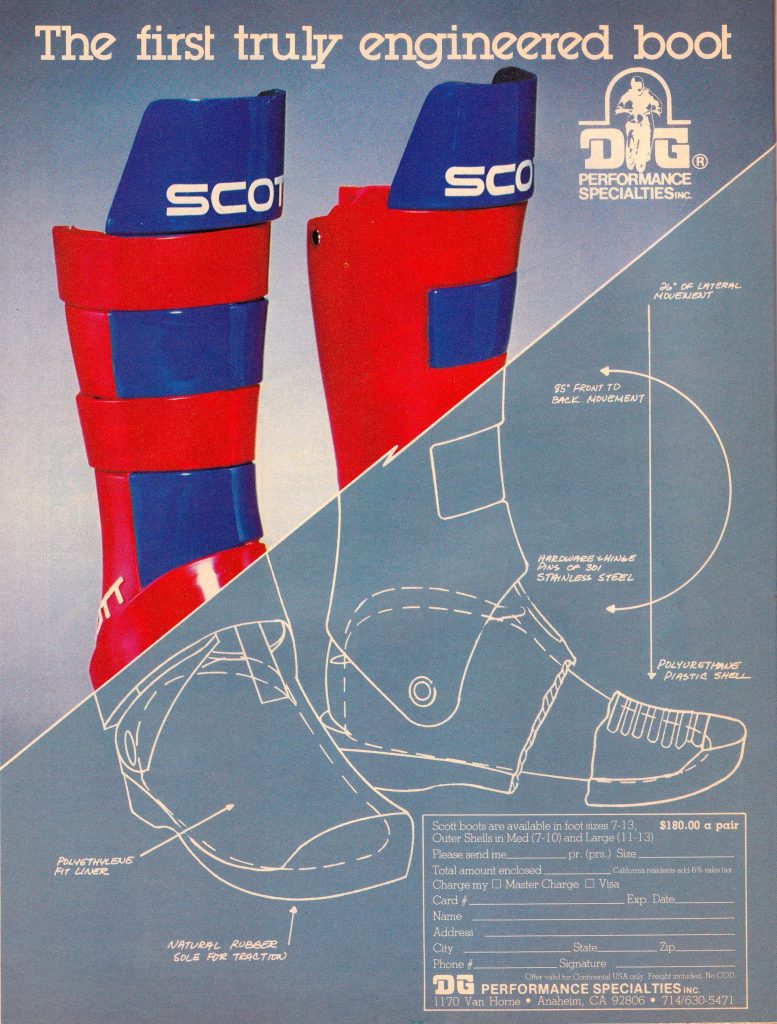 While its spacy looks were probably not a large hindrance in 1978, its sky-high $180 (that is $800 in today’s money!) price tag certainly was. At the time, this was double the cost of the average leather motocross boot and a pretty high bar to entry for many average riders. Photo Credit: Scott USA

Introduced in 1978, the Scott Boot made quite a splash with America’s premier motocross rider Bob Hannah at the controls. Looking for all the world like something from the movie sensation Star Wars, the Scott Boot was high-tech and cool. With Hannah’s endorsement and cachet of winning, the Scott Boot generated tons of press at the time. The Scott Boot offered a great deal more support than any other boot on the market and promised to last three to four times as long with its durable plastic construction. At $180, it was outrageously expensive, but many riders snapped them up to have the latest and best protection available. 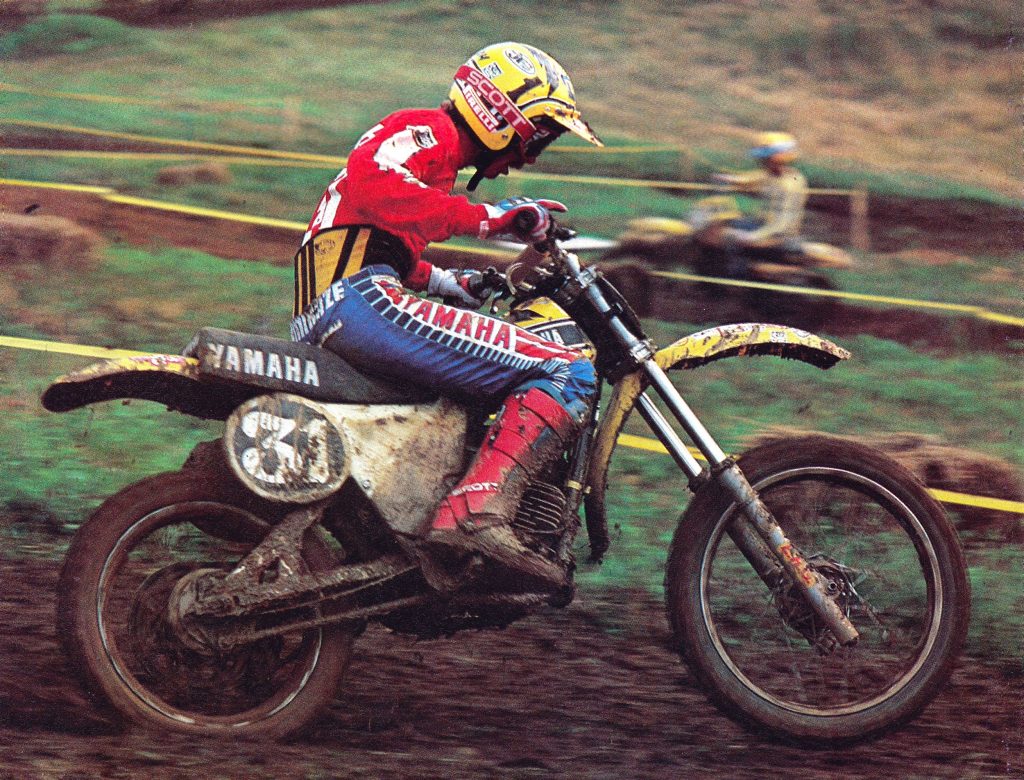 Having the greatest rider in the sport in their boots certainly did not hurt Scott’s sales in 1978. Photo Credit: Dave Hawkins

While the Scott Boot proved a hit initially, many riders found it difficult to come to terms with the boot’s unique feel. The plastic construction and steel hinges that made the Scott Boot highly protective also robbed them of the feel riders had become accustomed to. The boot’s exterior shell also only came in two sizes to keep production costs down so if you were at the fringes of the sizing choices you were likely to find the boot’s fit less than ideal. The slippery toe pieces and inflexible nature of the boot’s construction also made it hard to execute positive shifts and many riders found the hard plastic shell made gripping the bike more difficult. Eventually, the high cost, construction compromises, and disappointing feel the boot provided turned the tide against Scott’s innovative boots. After only three years on the market, Scott retired the plastic boot in the early eighties. 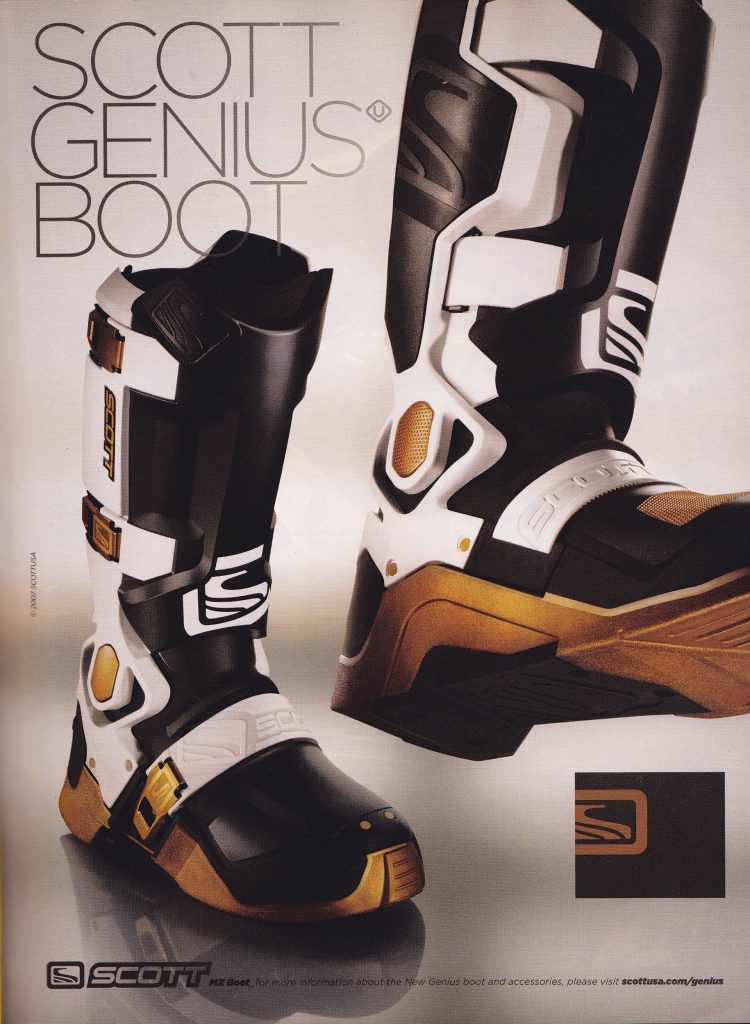 In 2007, the plastic boot made a brief reappearance in the form of Scott’s new Genius Boot. Much like the original, it failed to catch hold with any lasting success in the marketplace. Photo Credit: Scott USA

Aside from a brief revival attempt by Scott in 2007, the all-plastic boot has never made a serious return to motocross. While plastic boots never fully caught on, many of the innovative features of the original Scott Boot are still with us today. Advances in plastic construction have allowed modern boots to merge the best characteristics of natural and synthetic materials into one design that provides superior protection while still maintaining excellent feel. Most modern boots are as much plastic as they are leather, and riders have become accustomed to the increased support they provide. Innovative, unique, and just a bit before its time, the Scott Boot remains an icon of one of the most interesting eras in motocross history. 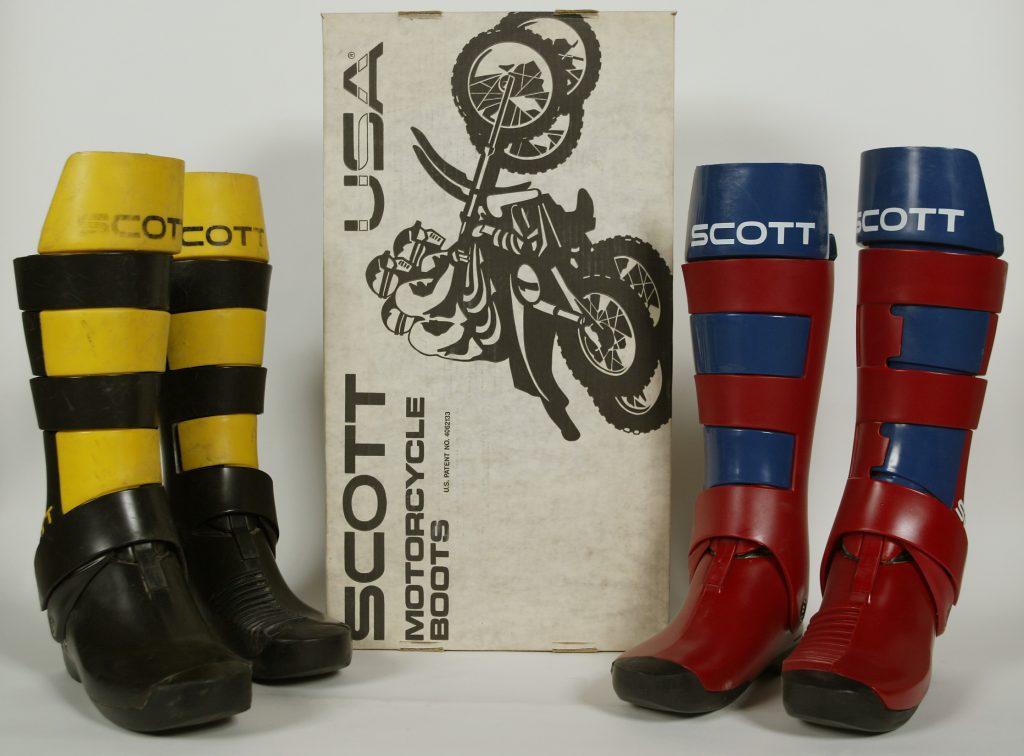