For this edition of Classic Ink, we are going to take a look back at one of the coolest mail-order companies of the early nineties, On the line Racing. 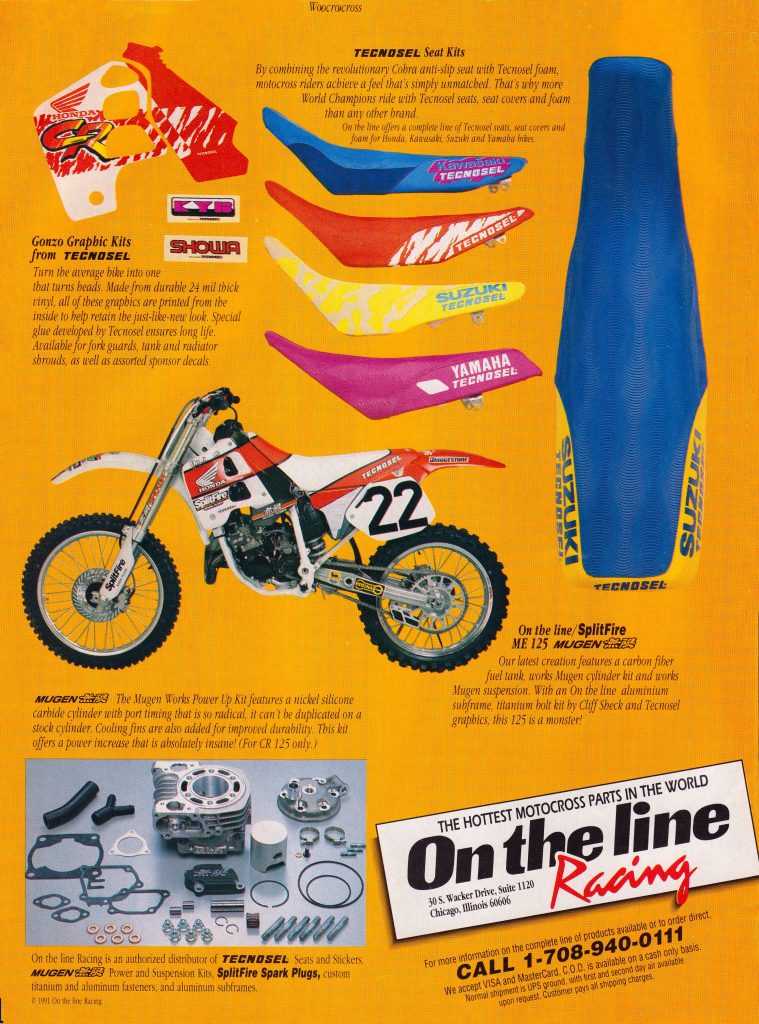 In the early 1990s, if you were looking to build a machine to rival the works bikes from Japan, On the line Racing was the place to call. Their lineup of ultra-trick and ultra-pricey exotic parts from Europe and Japan made them the one-stop shop for the rider without a budget. Photo Credit: On the line Racing 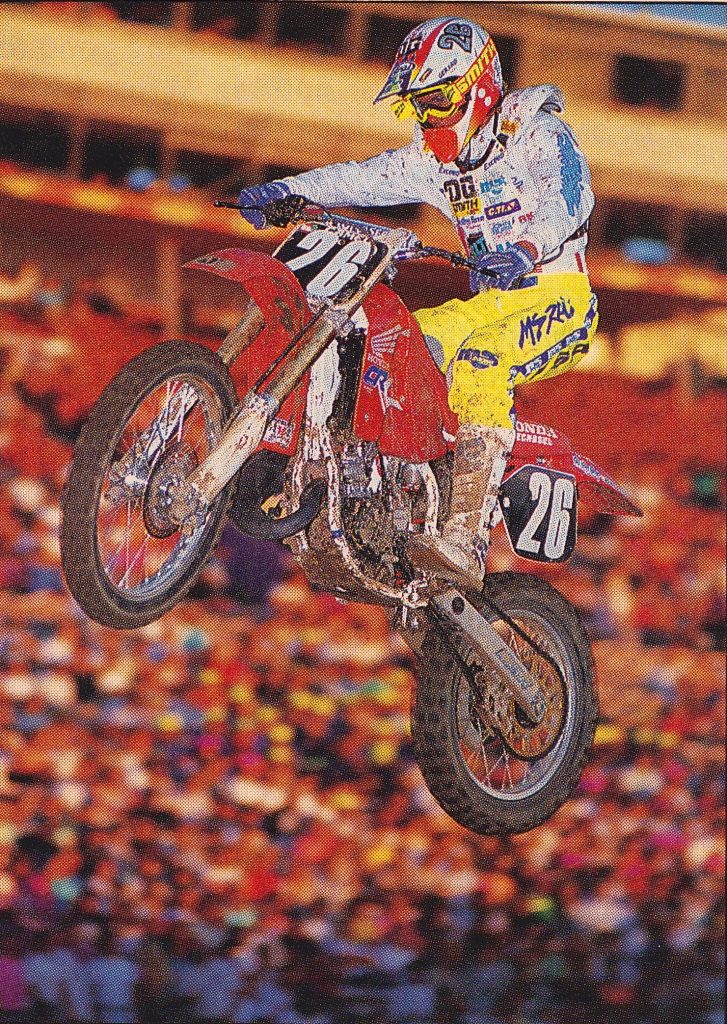 In 1990, On the line Racing’s Ty Davis became one of the very few people in the world who can legitimately say they beat out Jeremy McGrath for a Supercross title. Photo Credit: Dirt Bike

In 1986, the AMA changed the landscape of professional motocross racing here in the USA with the introduction of the Production Rule. Ostensibly enacted as a way to level the playing field for privateers, the Production Rule effectively ended the “works bike” era in America. After 1985, all the motocross bikes raced in professional AMA events were required to start life as a production machine. While it is debatable how much the Production Rule actually leveled the playing field for privateers, there is no denying that it raised the overall quality of the machines available to everyday consumers. 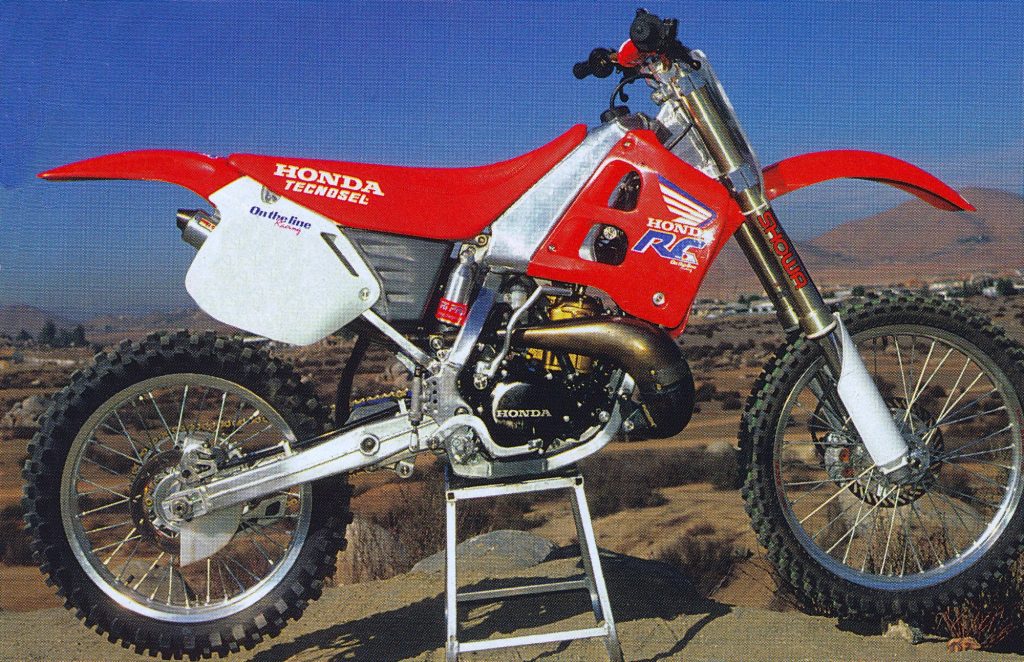 Exotica like this One the line Racing CR250R was common in Japan but largely unheard of in the USA in the 1990s. With deep enough pockets, Terry Good could provide you with a machine far tricker than anything ridden by Stanton or Bayle in 1990. Photo Credit: Motocross Action

With the advent of the Production Rule, the ultra-trick works bikes of the ‘70s and early ‘80s became extinct here in America, but they remained very much alive in Japan and Europe. Over there, the sky was the limit and the race teams continued to campaign all manner of exotic one-off designs. While the works bike was no longer legal for AMA professional racing, there remained a strong niche market for exotic parts from overseas. Enter Terry Good, a former professional racer and motocross entrepreneur based in Chicago. An avid motocross and works bike enthusiast, Good realized there might be a market for some of the exotic parts seen on the Japanese and Grand Prix circuits. Seeing the potential for a business, Good launched On the line Racing and began importing the Italian Tecnosel seats and graphics seen on the bikes of many of the GP stars. Eventually, Good added Mugen to his portfolio and became the US importer of the trick power-up and suspension kits from Japan. Alloy tanks, exotic swingarms, monocoque subframes, and titanium bolt kits were all available from On the line’s expansive catalog of European goodies. 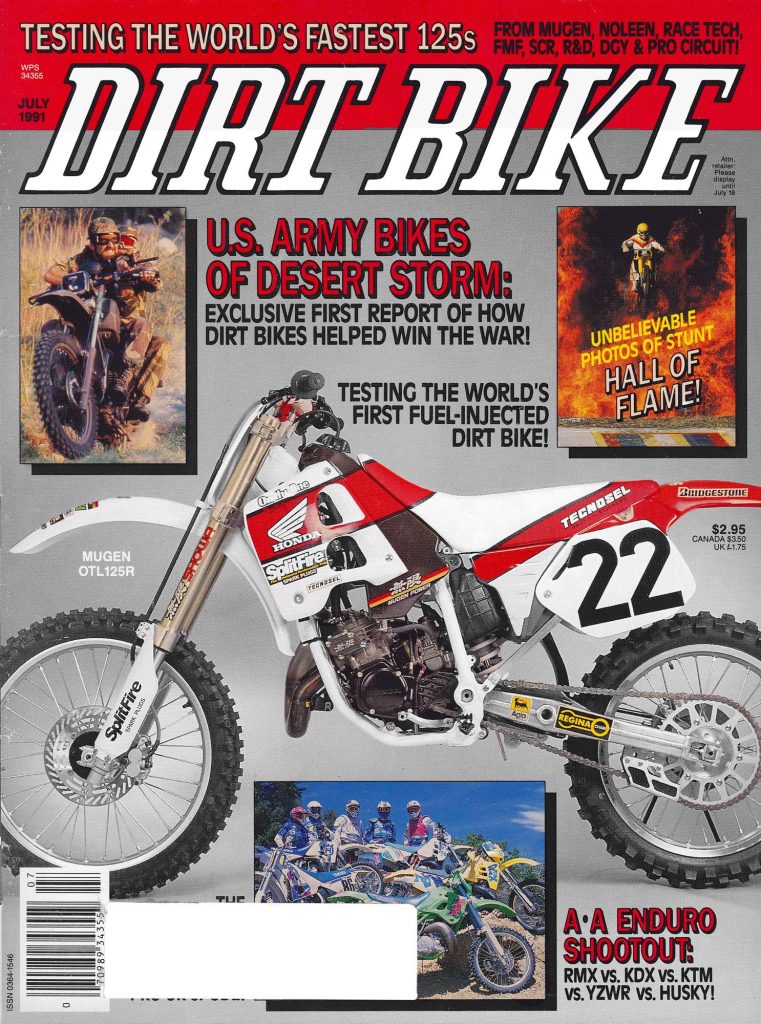 Started by the founder of Honda’s son Hirotoshi, Mugen Motorsports has been the pinnacle of hot Honda performance for nearly five decades. In 1991, this Mugen Honda 125 was the thing dreams were made of. Photo Credit: Dirt Bike 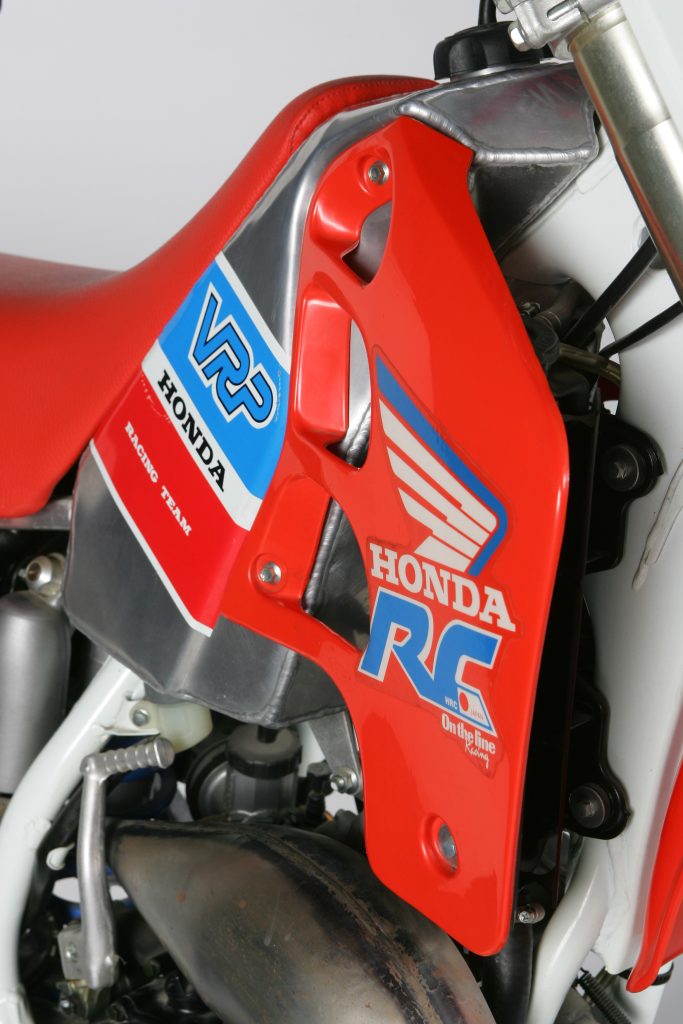 After the demise of works bikes in the mid-1980s, exotic alloy tanks like this VRP unit from Italy became the domain of well-heeled collectors and amateur enthusiasts. Photo Credit: Le Big 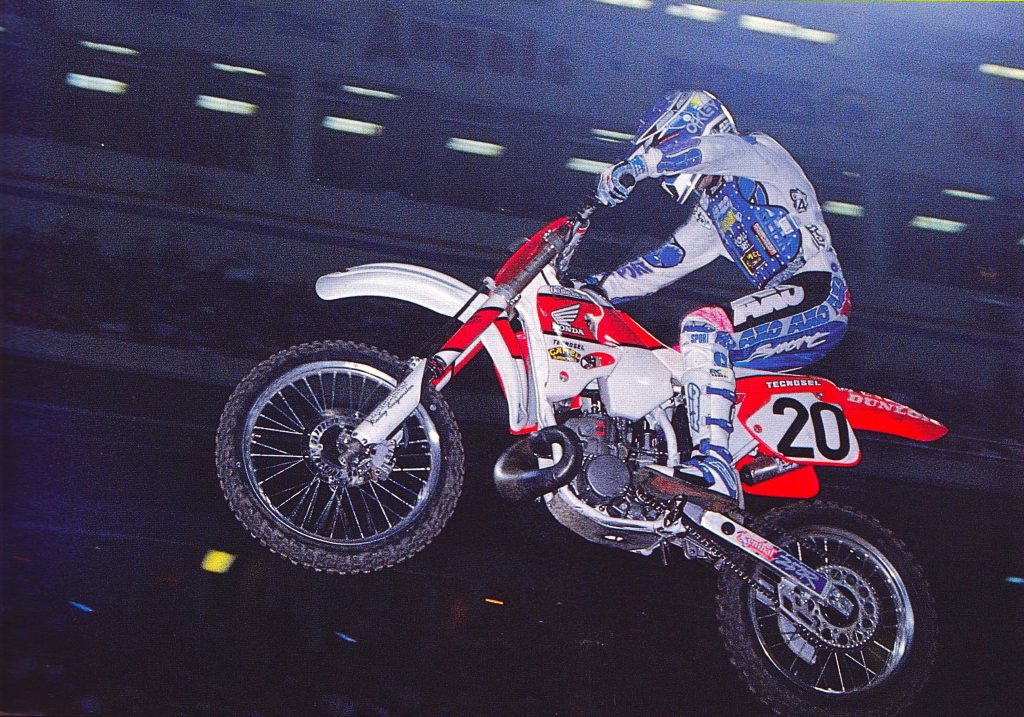 In 1990, On the line Racing’s profile grew even larger by sponsoring former Suzuki factory rider Ty Davis’ charge toward the 1990 125 West Coast Supercross title. Piloting an On the Line Honda CR125R, Davis carded two wins on his way to his first and only Supercross title. Interestingly, Davis’ closest competitor for this title would be a rather unknown Team Green rider by the name of Jeremy McGrath. In 1991, Davis moved up to the 250 class and suffered a difficult year on his unique-looking On the Line Racing CR250R. Because of the Production Rule, Davis’ CR could not employ most of the trick parts in the On the line Racing catalog, but the bold Tecnosel graphics still garnered Good the cover of two issues of Dirt Bike in 1991. In 1992, Davis transitioned to off-road competition and On the line Racing picked up another former factory Suzuki star to take his place. Once one of the hottest properties in the 125 Class, Granada Hills, California’s Erik Kehoe was popular with fans but no longer the title threat he had been in the mid-to-late ‘80s. In the 1992 standing, Kehoe barely broke the top twenty indoors but piloted his On the line Racing CR125R to a very respectable eighth overall in the final 125 National Motocross standings. 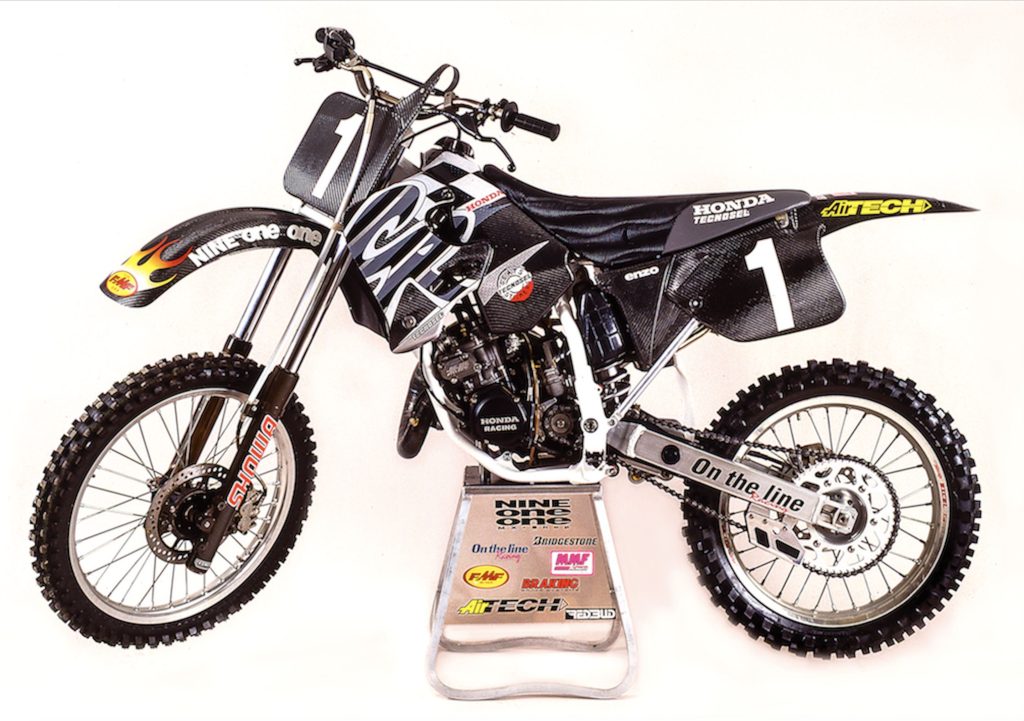 In 1994, On the line Racing built this ultra-light 167-pound CR125R. Using a mix of works and one-off carbon fiber parts, Good was able to cut an astounding 40 pounds off the weight of the standard CR. Photo Credit: Dirt Bike

Eventually, On the line Racing pulled out of the race team business and transitioned out of the spotlight. In the mid-90s, Terry became more interested in his passion for classic works machines and less enamored with the day-to-day grind of modern motocross racing. On the line Racing still made the occasional appearance in Dirt Bike or Motocross Action with an exotic machine like their 167-pound CR125R, but for the most part, the brand faded out of the moto mainstream. Today, Terry Good is still as passionate as ever about his love of motocross and maintains MXworksbike.com, which is one of the coolest online sites dedicated to the history of motocross exotica.