Our man Blazier is back with a look at this, errr, beauty.

For this edition of Classic Steel, we are going to take a look back at KTM’s mighty 495 Pro-Lever for 1982. 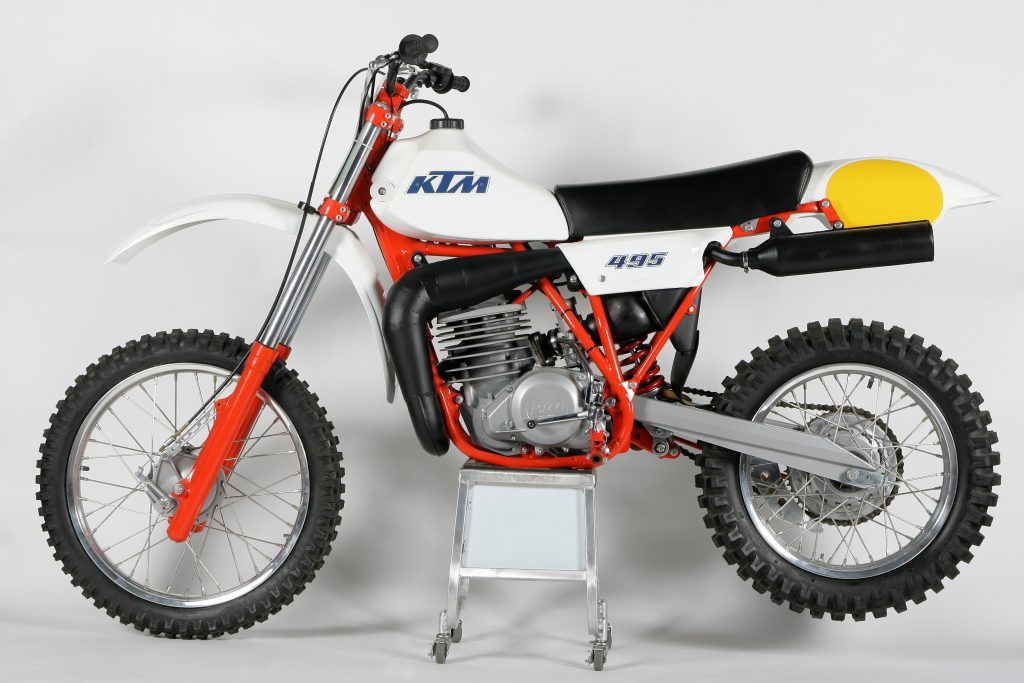 In 1982, the KTM 495 Pro-Lever was the biggest and baddest machine in motocross. Photo Credit: Stephan LeGrand

In 1982 KTM still a niche’ player in US motocross. Their bikes were big. tall, stodgy and out of step with the tastes of America’s youth. Even though they had enjoyed significant success in Europe, their uniquely Austrian flair had never really caught on with buyers on this side of the pond. 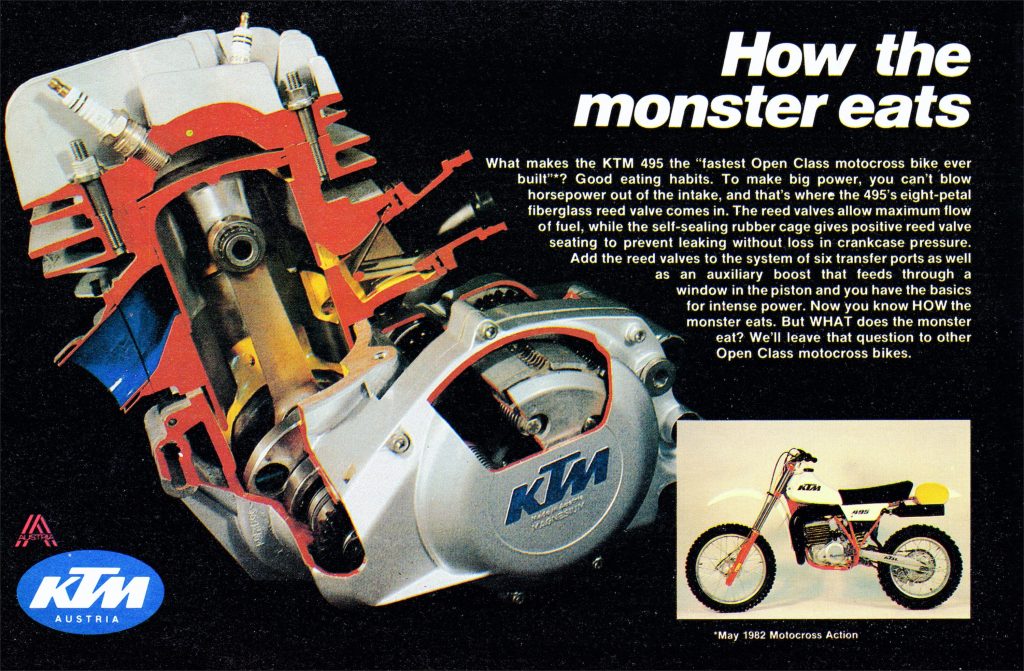 Air-cooling and a big piston were all that was necessary to make big power in 1982. Photo Credit: KTM

Originally sold under the Penton name in America, KTM was considered far more of an off-road power than a motocross threat by most US racers in the eighties. At that time, it was rare to even see a KTM outside of enduro competition in the states. This was in spite of the impressive success they had enjoyed in Europe. During the seventies, the Austrian manufacturer had won three World Motocross titles with Russian Guennady Moisseev at the controls. In Europe, KTM was a power, in the US, they were an also-ran. 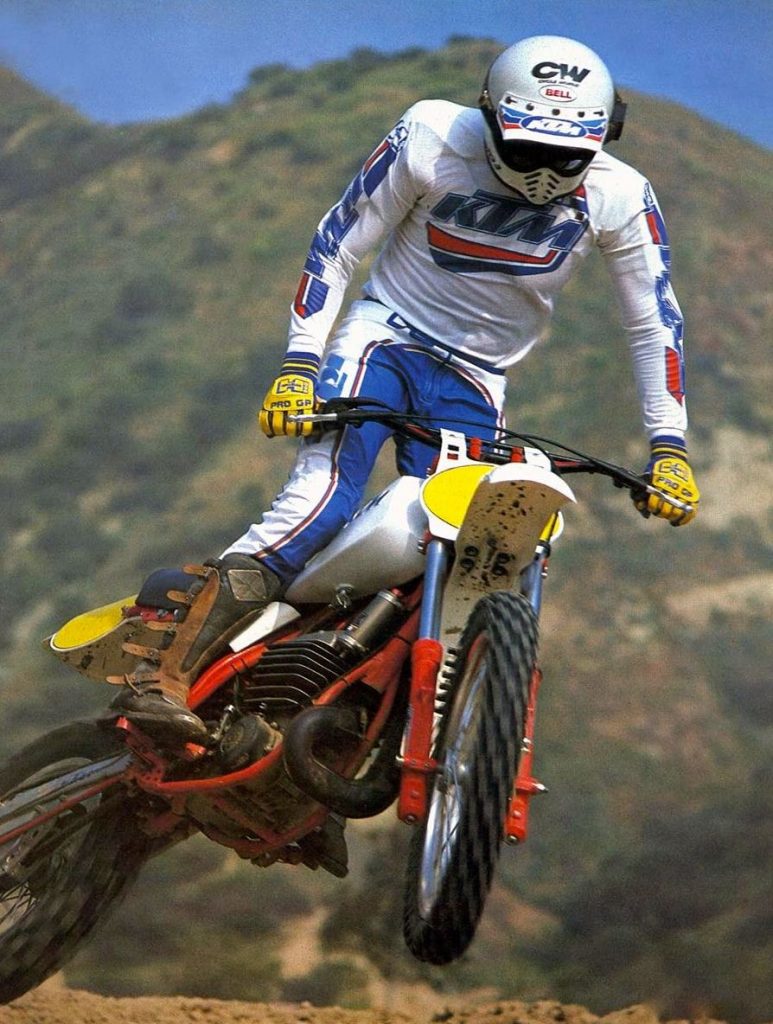 The 1982 KTM 495 Pro-Lever was a big bike, best suited to big riders. If you were small and light, it was more likely to ride you, than vice versa. Photo Credit: Cycle World

Of course, some of this might have had something to do with the politics of the time.  Having a Russian rider, on an Austrian bike, was probably not the perfect recipe for PR success in Cold War America. That, combined with their very European flavor, left most American racers cold. What KTM needed, was a bike to spark the imagination of the US buying public. A bike so outlandish, that it was sure to steal the spotlight away from the Japanese, German and Swedish competition. A bike like the 1982 KTM 495 Pro-Lever.

Today, the KTM 495 Pro-Lever holds a special place in the annals of all-time motocross tire-shredders. In ’82 there was no faster machine available than the mighty 495. Employing a simple air-cooled cylinder and reed-valve, the 495cc mill pumped out a blistering rush of power through its five-speed transmission. With a massive 92.25mm bore (4mm larger than any other machine in the open class) and short 74mm stroke, 495 produced a very quick-revving style of power. It snapped to attention down low and climbed onto the powerband with a ferocious onslaught of power. The midrange thrust was ligament-straining and the top-end pull bordered on lunacy. If you geared it up, the big KTM was capable of topping out at an eye-watering 123 mph. If speed was your thing, the 495 was ready and willing.

Unfortunately, the chassis on the ’82 495 Pro-Lever was not up to the harnessing the power of its monster motor.  For starters, the bike was extremely tall.  With a 39” seat height, just climbing onboard was a real challenge.  If you could actually manage to get a leg over the huge machine, you would then be greeted with the hardest seat known to man. This rock-hard saddle only magnified the sensation of sitting on top of a big, tall motorcycle.  Once in motion, you were quickly aware that the 495 was no lightweight as well. At 240 pounds it was a good 15 pounds heavier than the lightest bikes in the class. With its Jolly Green Giant chassis and thunderous power you felt every one of those pounds.  Turning was a merely an afterthought on the 495. With its long wheelbase, slack geometry, and top-heavy feel, flicking the bike around was a near impossibility. On the big KTM, turns were best negotiated by planning way ahead and giving yourself plenty of room. It was great at going very fast in a straight line, but not a lot else.

Even if a rider could control the massive horsepower and come to terms with the cranky handling, you would still have to deal with the KTM’s atrocious front forks. The 40mm Marzocchi units on the 495 were grim even by early-eighties standards. They were badly under sprung for the KTM’s substantial weight and poorly damped. The action was harsh. with a great deal of stiction and a pummeling ride. When Motocross Action Magazine tried to compensate for the woefully soft springs with some additional air pressure, both forks quickly leaked it out.  KTM called the Marzocchis “fluted” because of all the damping holes drilled into the damper rods. When MXA tested the KTM, they pretty much summed up the fluted forks when they stated: “KTM should take them out and try to sell them to a music company, because they definitely don’t dampen.”

The one bright spot on the ’82 KTM chassis was the new single-shock rear suspension system. Dubbed the “Pro-Lever,” it featured a single shock mated to a variable-rate linkage and large alloy swingarm.  The new Pro-Lever was similar to Honda’s Pro-Link configuration and was far more compact than either Suzuki’s Full Floater or Kawasaki’s Uni-Trak designs. 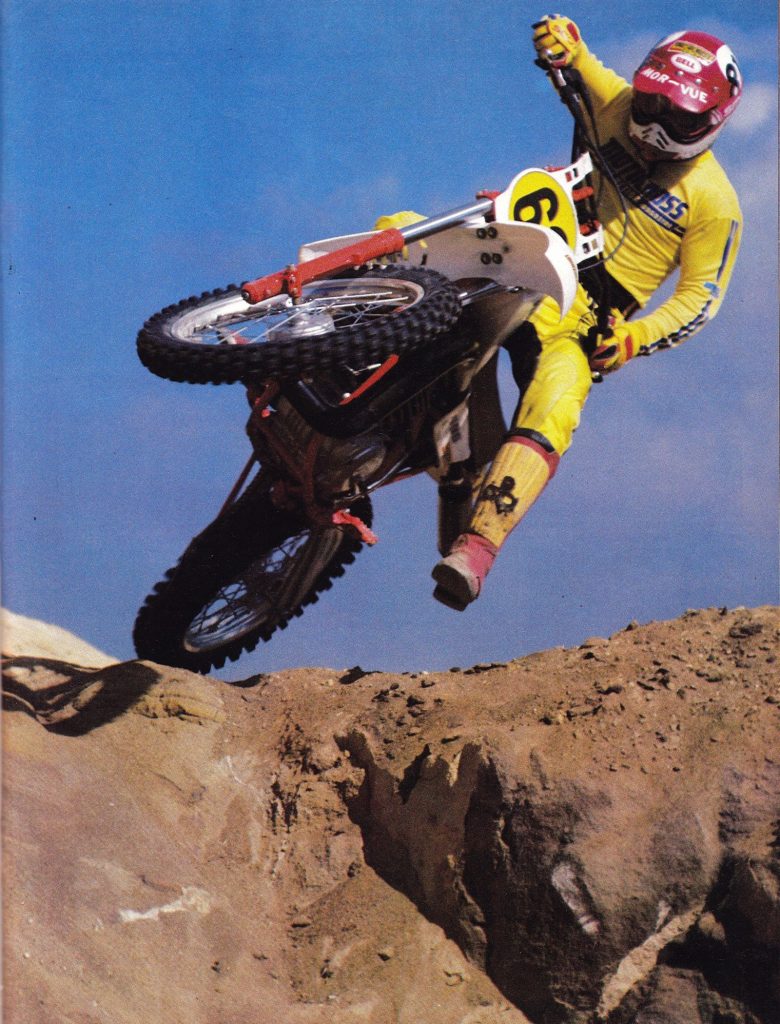 Man-handling the mighty 495 took skill, strength, and more than a little bravery. This was no machine for the faint-of-heart. Photo Credit: Motocross Action

What made the Pro-Lever a success was not so much the innovation of its design, but the choice by KTM to use a premium Fox shock to handle the damping duties. By 1982 standards, this shock was very advanced and offered compression and rebound damping adjustments. Thankfully, this combination of Austrian and American engineering yielded far better results than the Italian forks. The Pro-Lever worked great at taming the track and offered a well-controlled ride that was 150% better than the crummy forks. About the only complaint riders had with the Pro-Lever was its maintenance schedule. In ’82, riders had not yet become accustomed to pulling apart their rear suspension to grease everything and several magazines commented on what a pain-in-the-butt this task was.

Another first on the ’82 KTM was its fully-removable aluminum rear sub-frame.  This was the first production machine to have this time-saving feature. It greatly aided the task of servicing the rear suspension and was a welcome addition. Detailing on the rest of the bike was very good for the time. The brakes, while not quite as good as the Honda’s dual-leading-shoe units, did an admirable job of slowing down the big Austrian. The stock chain was a high-quality Regina and tires were premium Metzlers front and rear. One thing about KTM is they have always used premium quality components, and the 495 was no exception.

Two words can pretty much sum up the 1982 KTM 495, too much. It had too much of everything: too tall, too heavy, too big and too powerful. It was a giant of a machine that catered to speed freaks and horsepower lunatics. It was a bike where handling and suspension took a back seat to eye-watering acceleration. It has carved out its little place in history based on this one defining trait. It was by far the most powerful machine of its era and will always be remembered as the fastest of the fast.

A Peek at the GP's