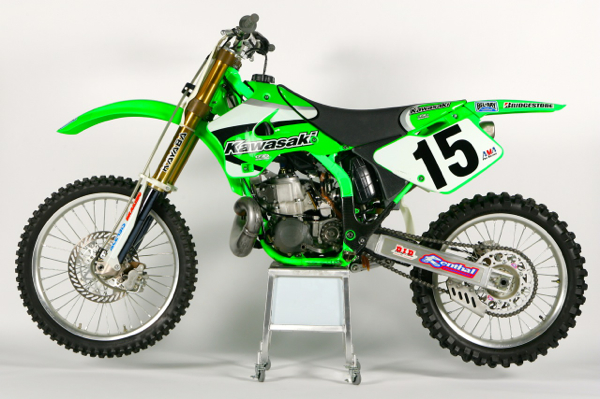 For this week’s Classic Steel we are going to take a look back at Damon Huffman’s US Open winning 1998 works Kawasaki SR250.

For this week’s Classic Steel we are going to take a look back at Damon Huffman’s US Open winning 1998 works Kawasaki SR250.

The 1997 season turned out to be one hell of a year for Team Kawasaki. For starters, after a decade of domination, Jeff Emig and Team Green finally broke Honda’s stranglehold on the Supercross title. Then Jeff backed up his shocking  ’96 250 Outdoor title with a second championship victory, this time in domination fashion. It looked as if the pendulum of motocross power might finally be swinging toward the boys in green. With both number one plates in hand, and a stable of young up-and-coming riders, 1998 looked to be one heck of a year for Kawasaki. Unfortunately, 1998 turned out to be anything but.

The season started out promising enough, with defending champ Jeff Emig taking a second place behind a surprising Kawasaki mounted Sebastien Tortelli in a muddy Los Angeles Coliseum. From there however, things got progressively worse. After having some of the best bikes on the track in ’96 and ’97, Team Kawasaki riders Emig, Ryan Hughes and Damon Huffman seemed to be struggle on the ’98 SR250’s. There was talk of arm pump by the riders and poor performance by the bikes. Whispers in the pits pointed to changes made in the off-season that had the riders searching for answers on the track. Ironically, the stock KX250 was universally acknowledged to be the best 250 of ’98. With such a strong base to work with, the struggles of the Factory team became even more puzzling.

As the season wore on things got even worse for the team. In Seattle, defending Supercross champ Emig holeshot the main, only to fade back to 14th place at the end – all without crashing! At this point, everyone began scratching their heads, as McGrath continued to pull away and the whole of Team Kawasaki struggled to crack the top five. Emig eventually left the series with back problems and night vision issues (at this point, many felt Team Emig was grasping at straws). By season’s end, the top finishing Kawasaki rider would be Ryan Hughes in tenth position. It was a mighty fall from grace for the team that had dominated 1997.

Midway through the outdoor season, things started to come around for Team Kawasaki. After a rocky first few rounds, by Red Bud, Emig was back to his winning ways, scoring a dominating 1-1 in the July heat. Emig would go onto reel off four of the next five overall wins, tightening up the series points chase. Unfortunately, just when Emig was starting to make a series of it, injury would derail his season. He would pull out after the Millville round, ending Kawasaki’s chance at a third strait 250 Outdoor Motocross title. Emig would finish the 250 MX season in fifth, with teammate Hughes rounding out the top ten.

After a disappointing Outdoor and Supercross campaign, the inaugural US Open Supercross would provide a chance for Team Kawasaki to end the ’98 season on a positive note. The race would take place in MGM’s Grand Garden Arena, and be more like an Arenacross than a traditional Supercross event. Predictably, going into the event, ’98 Supercross champion Jeremy McGrath proved be the heavy favorite. McGrath, however, would struggle on the tight sandy circuit, finishing 7th and opening the door for a true wild card to take the win on night one. As it turned out, it would be the incredibly talented, but often injured, Robbie Reynard that would capture a surprising opening night win. Following home in second would be Damon Huffman on his #15 SR250. On night two, the King of SX would rebound and take a popular main event victory. Reynard, however, would prove unable to back up his night one win, finishing a disappointing 15th place. That would leave a consistent Damon Huffman and his solid 2-2 finishes to capture the overall and its fat $100,000 payday.

After the incredible season Team Kawasaki had in 1997, 1998 proved to be a real challenge. The entire team struggled with bike set up throughout the majority of the season. Adding insult to injury, Jeff Emig became the first ever reigning Supercross champion to not win a race, while defending his title. 1998 has gone down as the year that the King reclaimed his throne, while Emig’s rock star antics finally caught up to him. It was a tough year all around for the team and certainly not the one they had envisioned in January.  Huffman’s surprising US Open victory probably helped take some of the sting out of a disappointing year, but for Team Kawasaki, 1998 probably remains a season best forgotten.

Flip of the Coin