Desalle fires back in Germany!

Desalle fires back in Germany!

And the pendulum swings again. This time it was Clement Desalle who took advantage of an ill Antonio Cairoli by winning the German GP to get the points’ gap back down to 25.  Desalle brushed off the pain sustained from his big crash the week before in Italy to go 2-1 in Germany.  But, the Belgian will rue the points he gave up in Italy even more now, because he could have been in the points’ lead or at least right with the defending world champion.

Desalle lost the first moto to a magnificent Max Nagl, who won a thrilling first moto in front of his home crowd in his first ride back from injury.  Nagl might just have got himself a chance of a new contract with HRC after his performance!  Max came back from a bad start in race two and pushed through a lack of race fitness to finish sixth and take second on the podium.  Nagl was the rider of the day in Germany!  Cairoli had two bad starts resulting a fifth and fourth place finishes, but the Italian was on antibiotics for a bug he picked up.  He said that although he didn’t feel or ride well, he was happy to limit the damage – classic Cairoli!  Expect the Italian to come out all guns blazing in Sweden, and Desalle will have to do the same to show Cairoli that he really is the man to beat.

Jeremy Van Horebeek made his tenth podium in row, but like Cairoli, was feeling a bit under the weather.  Van Horebeek held off Cairoli in both races and got himself a couple of points closer to Cairoli in the championship.   Kevin Strijbos probably expected better after his heat race win on Saturday, but bad starts for the Belgian meant the best he could do was fourth overall.  It’s still a big improvement for Kevin who has got himself back into the mix of podium contenders.  It was also a good day for Shaun Simpson. The consistent Scot got two top-three starts. and held on for a sixth and fifth place finish, for sixth overall.   Simpson has now moved into fifth in points taking advantage of the injuries through his consistency, and this was by far his best performance of the year.

Tommy Searle badly needs a good start.  He hasn’t seen the front of the pack all year, but did come through well in both motos to take seventh overall. Tommy was using a stock engine in Germany as he looks for a smoother power delivery.   Steven Frossard had his standard one good moto, one bad moto. The factory Kawasaki rider had a third place in race one but a rock smashed his goggles in race two and forced the Frenchman to retire.  In transfer news, it seems HRC are after Gautier Paulin and/or Tommy Searle.  Max Nagl will also be in the mix (especially after his performance in Germany), and Bobreyshev still has an outside chance of keeping his HRC ride.  No American riders are being considered as of yet.   Factory Yamaha will run a second factory rider in 2015, and with Desalle staying with Suzuki, the four riders in contention for the Honda ride would all be a good choice to be Jeremy Van Horebeek’s teammate in 2015. 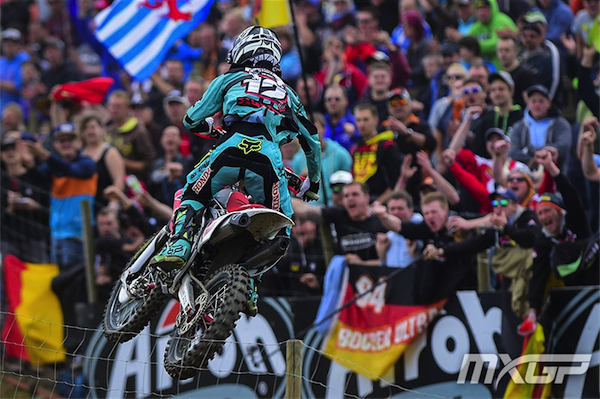 Glenn Coldenhoff is moving to MXGP with Suzuki, and KTM is rumoured to be having a three-rider team in MXGP for 2015.  But the question remains, will Herlings move up or will he stay in MX2? Herlings dominated in Germany again and had the fastest laps of anyone including the MXGP class. The kid is back to his best now after his early season issues and showing that he may be arguably be the fastest rider on the planet.   But behind him, Tim Gajser re-affirmed the paddock’s belief that he is the next top youngster to keep an eye on.  The HRC Honda man finished second in both motos, with lap times right with the factory MXGP riders.  Gajser, believe it or not, is still at school and will be a full time student right through next season as well.  Gajser is only showing a glimpse of what he is capable of, and HRC have been smart in getting him tied down to a two year deal so quickly. 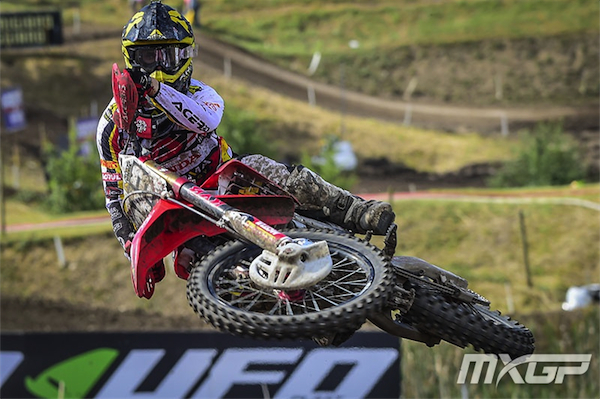 Jordi Tixier has re-found his consistency and got on the podium again.  But he had a hard fought race with countrymen Ferrandis and Febvre in race one, and had to come from behind in race two.  Tixier is still not sure whether to re-sign with KTM in 2015, go to CLS Kawasaki, or go to America.  It all might hinge on whether Herlings stays in MX2!  Romain Febvre should have been on the podium.  He was all over Tixier and Ferrandis in race one, only to find himself hit the deck.  He suffered a terrible start in race two as well, but still claimed fourth overall.  The hard pack German track suited the Frenchman perfectly, and as he negotiates his 2015 plans for MXGP or perhaps the Lites Class in the US, showing speed like he did in Germany will only help his cause.

Tenth in the championship, Jeremy Seewer, announced he has signed a two year deal with factory Suzuki as the 19 year old begins his full time career as a pro motocross rider.  Seewer had been doing an engineering course until June this year, and had to split his time between being a GP rider and a student. From now on, Seewer will finally be able to concentrate on motocross, so expect him to be really good next season, a lot of top teams were after the talented Swiss rider and Suzuki did well to re-sign him.    In other transfer news, it seems EMX125 championship leader Davy Pootjes will go straight into MX2 GPs next year with Red Bull KTM.  The Dutch speedster will try and follow in the footsteps of Herlings and should be a guy to watch next year.  Meanwhile, his EMX125 title rival Brian Hsu, has re-signed with Factory Suzuki and will race EMX2 and some MX2 GPs in 2015.   The young kids are coming through in GPs, showing the development classes are doing their job at bringing the top young stars into GPs on good teams.

But the pinnacle of the pyramid is MXGP, and that title fight will resume in Sweden with both Desalle and Cairoli determined to take the momentum in the series.