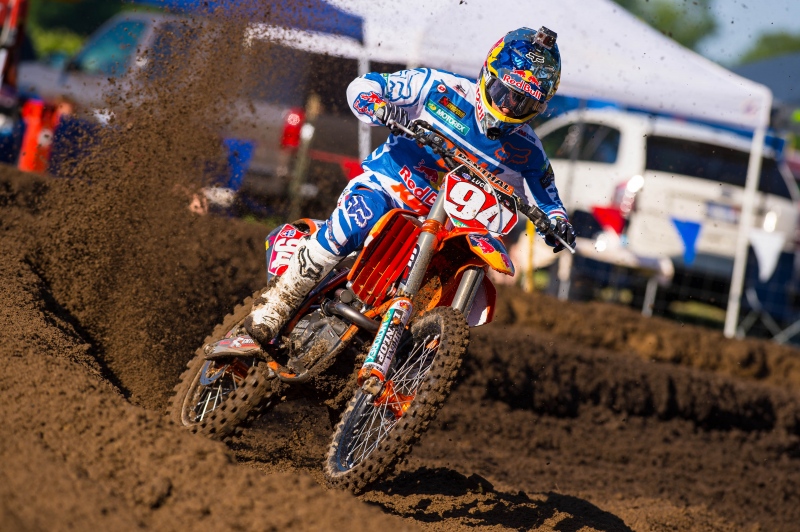 Roczen went 1-1 in perhaps his best performance of the year and now has a 26-point lead in the series over Ryan Dungey. Is it too soon for Kenny to start thinking about the title and what does Dungey need to work on to beat his teammate?

It’s never too soon to think about the championship. Riders like Ken, or both Ryans for that matter, think about the title even before the series start. It’s why they invest so much time, dedication and money in they training program. Riders who are favorites for a title and paid to win that tell us they take it race by race and don’t think about the title are lying. Kenny’s rides at Red Bud were very impressive. It takes a great performance at that track to go 1-1. I don’t think I ever made an overall podium there! The way Roczen rides is very different to Dungey and Tomac for example. Ken is riding with a lot of creativity and playing with the track. He makes the track look like a giant playground. He uses bumps to jump over other bums. He uses the whole width of the track to miss bumps, to open his corner entrances and to keep him momentum. When you ride like this, you don’t have time to get tired.

I am pretty confident the top four in Red Bud all have a great fitness but making it fun and playing with the track helps you also physically and mentally to get to the checkered flag. Canard was riding great in the beginning of the second moto and I was starting to see him being more playful with the track a-la-Roczen. Dunge and Eli are more the type of riders to pin it in the main line which at this level isn’t the right thing to do I don’t think. Can Dungey come back in the title chase? Whatever point leads Roczen and Martin have at halfway in the series they can easily lose them in the second half, that’s just the math part of the point system and the probabilities… But, to do so, RD5 will have to start beating KR regularly straight up which I don’t see happening right now. Why? Because he needs more creativity in his riding. He needs to have fun racing. He needs to make some drastic changes on his bike handling wise. I, again, saw his bike stand up multiple times in turn on Saturday. He tries hard, works hard, he’s dedicated but sometimes you need to make changes to improve…

Jeremy Martin answered back in a big way with his first moto win over Baggett after being reeled in late in the moto. And he shadowed Webb the second moto but couldn’t make the pass. Feel better about his chances for the title at the halfway point of the series now?

Jeremy is in the same position as Ken in 450. It’s their titles to lose at this point. They will obviously have more pressure the more we get to the end of the series while their competition will have less and less to lose. This could work against them but I’d rather have a 1 moto lead than trailing a moto. They will have to avoid photo shoots with Donn Maeda in the hills of Corona… Jeremy’s won half of the motos so far. He’s clearly the man to beat but it’s going to be tougher for him than Ken I would assume. Just because it seems like it’s easier to mess up in the 250 class and lose more points at once. In the 450, with Ken, even with a crash on the start, I don’t see him get worse than 5th. Red Bud is pretty much the track that looks like his home track of Millville. Budds Creek is next, very similar track again. Then, we go to Millville on the land his parents live. It’s going to be interesting to see how Jeremy deals with the pressure there. Like we say in French, “no one is a prophet in his own country”, meaning it’s always tougher to perform at home. We’ll have a better for both series after Millville which would be the 2/3 of the series.

Honda gave Freddie Noren Barcia’s bike for the nationals. Despite only riding it once, he had his season best finish in the second moto. Talk about the decision to give Noren the bike and what that must be like for him.

I am super excited for the guy that I actually don’t know. I don’t even know what he looks like. It’s the experience of a lifetime. The good old American dream of 4th of July weekend. It couldn’t have been better at any other track! But a part of me wonders why Honda has to go thru the 450 points standing and offer a ride to the first rider, in 13th, without any ties anywhere… Do they have a minimum of races where they have to have 2 riders on the gate to get sponsorship money since Trey missed a bunch of SX races? Or they felt like giving back to a well deserved privateer? Whatever the reason, it’s awesome for Fredrik who go his best, I think, overall ever, 11th (17-10). He should do better as he gets more used to his factory status and bike!

Also, biggest adjustment he has to make to a factory machine?

Dude, coming from a privateer 450 KTM to a Factory Honda, there isn’t much adjustment to make! I’m sure if Honda would have give him a stock bike with a pipe and graphics, he would have said it’s the best bike he has ridden ever! Honda has a lot of experience. They have a lot of base settings. I’m sure the adjustment was very smooth. I would think the most difficult part would be to get used to a different brand of bike because you know as well as I do that the engine and the suspensions on the factory Honda was 10 times better than he was used to ride…

Did you like Redbud? Talk about racing the event around the holiday and jumping Larocco’s Leap for the first time and any other stories you have of the track.

I liked Red Bud because the atmosphere is way different like anywhere else. I never podiumed there overall, just motos. It’s not my kind of track actually. I wasn’t a Swedish lumberjack-type enough of a guy to do good there! Funny thing is that Red Bud used to be shitty, hard packed and dusty. Before my first National season in 2000, I got all the tapes (yeah, no DVDs then!) of the ’99 season to learn the tracks. I was excited about Red Bud because it looked like a crappy south of France practice track or like Hangtown where I won my first National in ’00. When I got there Saturday morning of the 2000 National, they have brought 2000 truck loads of sand, sawdust and flooded the place! I thought I was at the wrong track. It looked and was night and day different from the tape I watched.

As far as Larocco’s leap, it was way more intimidating in real life than on VHS tapes! I was a little scared because you can’t see anything and it was big. I decided to get behind the most reliable rider that was jumping it and do whatever he was doing which was Kevin Windham… Got on his rear wheel, clicked to 4th on the YZ250 and it was pretty easy, just everything you had wide open. Another story from 2004 when they decided to celebrate the 4th of July the night before the race at 1am! That’s when we pretty much all had a motorhome and I was so pissed. I remember asking Tim Cotter what the eff they were thinking blowing fireworks in the middle of the night before a national! That same night it rained and my motorhome had its first leak over my bed… Ended up sleeping on the couch. Not a good weekend!

Does Aldon baker “make” his riders or do his riders “make” him as he is picky about who he works with…thoughts?

He is a very knowledgeable guy in the training side of things and makes sure his riders train/eat/sleep/rest right… The toughest part of being a trainer is having your rider listen to what they have to do no question asked. Because he won with RC, the riders he is working with now listen to him. If they have to wake up at 3am and run an hour or eat sushi for breakfast, they will do it. They might not listen to someone that doesn’t have that track record. I will call him a very high paid babysitter that makes legends win titles. Some riders need guys like that. Some can’t motivate themselves on their own. But nowadays, with all the distractions rider can have, it’s good to have someone with a whistle that play the cop.

What I want to see is Aldon make Peick or Noren or a Lamay win a title. It’s obviously easier to do it with RC, Sew and RV…  I was racing against his best trainee, RC, in 2002. Beating him a few times in SX. So I know a rider he trains can be beat because he only knows about training and has no idea about the technique it takes to go thru whoops, thru a corner, down a hill with bumps, about line choices or anything about bike set-up, rider position, feet position, bars position and so on and so on… Sometimes I wish I could fully train a top 4-5 guy who would listen to what I say no question asked like him… But wait, I forgot, I don’t want to work!