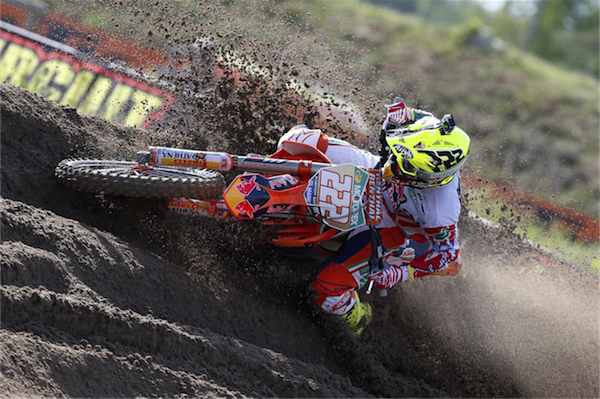 Total domination. That’s how to describe Antonio Cairoli and Jeffrey Herlings’ double moto wins at the Finland GP.  Despite making it look easy, Cairoli described the brutal conditions as the toughest so far in the championship. The short, sandy track demanded a lot of concentration and fitness, especially in the final two motos of the weekend.   Cairoli showed the two ways he can win; a controlled win in race one by five seconds, and then a dominating win in the race two where Cairoli had an eight second lead at the end of lap two.  The Italian eventually won by 22 seconds, but his fastest lap was two seconds faster than anyone else.

The second moto became a race of attrition that allowed riders who aren’t normally associated with the top rankings to compete in an all out battle for a podium spot.  With Desalle, Paulin and Bobreyshev not racing due to injuries, the other factory guys started to trip themselves up in race two, leaving Shaun Simpson, Dean Ferris, and Rui Goncalves battling Max Nagl for third.

Jeremy Van Horebeek had been running second, but he crashed hard and had to go into the pits to get his bike repaired.  Van Horebeek eventually got back to eleventh, but his streak of eleven podiums in a row was gone.  Kevin Strijbos had to come from last, Tommy Searle had a huge crash, and Steven Frossard stalled while in second and dropped to fifth!  All this meant it was Shaun Simpson battling a rejuvenated Dean Ferris, Rui Goncalves, and Max Nagl for second!  Frossard would catch and pass them all, and then Kevin Strijbos came from outside the top twenty to claim fourth on the last lap.  Nagl dropped from fourth to seventh with Ferris finishing fifth, just in front of Rui Goncalves.   Goncalves had his best result of the season and Ferris put himself back in line for factory MXGP ride with his 7-5 results for sixth overall.   Shaun Simpson held them all off to finish a brilliant third, after the disappointment of crashing in the first turn in race one, and only finishing eleventh.   Simpson is now rumoured to be talking to Factory Yamaha for a 2015 ride.  In the end it was Cairoli, Frossard and a brilliant Strijbos, who rounded out the podium.  Frossard claimed his first podium in over two years and strengthened his position to retain a factory GP slot next year. Whether he stays with Kawasaki remains to be seen, especially until the Ryan Villopoto situation is resolved.

Herlings only knows one way to ride and that is flat out.  His second moto lap time was 1.3 seconds faster than even Cairoli’s best lap in his second moto, and three seconds quicker than anyone else in his class.  Herlings’ speed was simply ridiculous on Sunday and he won the second moto by a minute, even pushing hard on the last lap!  Herlings’ drive to push, even when he is dominating every race, is something pretty special.  The kid is driven, and at only 19 years old, he could well go on to be the greatest GP rider or all time.  The fans are still frustrated that the Herlings/Cairoli battle won’t be happening until 2016 at the earliest, but maybe the MXGP riders are glad they get one more year without having to race him!

Behind Herlings it was Tim Gajser, who was second overall with 3-3 results.  The Slovenian was showing his sand skills are still improving, along with his general race speed.   Jordi Tixier was third, which was a good result after a huge crash on Saturday left Tixier battered and bruised.

The most disappointed rider in Finland had to be Dylan Ferrandis.  The Frenchman finished second in race one, but got deducted ten positions (as did third placed Jose Butron) after passing Herlings on a yellow flag when Herlings pulled over more than normal for an injured rider.   Ferrandis re-grouped for moto two, and passed Gajser with two turns to go to claim second.   This was Ferrandis’ best race in a while, but the results don’t do his speed over the weekend justice.  But due to the penalty, Gajser has closed the gap on Ferrandis with fifth place in the championship, to just 13 points.

Christophe Charlier suffered bad starts, but had his best ride since his comeback from injury, to finish fifth overall.  Charlier will move to the 450 class next season, and the big bike should suit his style more. I f he can remain injury free, he could be a surprise package in MXGP next season.  Julien Lieber has had a strong last few races, and he continued his good form with seventh overall in Finland.  The Belgian seems to be missing the confidence to challenge for podium positions, but he has the style and technique to start knocking on the door.

The series now moves to the old-school circuit of Loket in the Czech republic in two weeks, and the slick, hilly, natural terrain will be in contrast to the, sandy, rough, and tough Finland circuit.  It might be the best chance for the MXGP guys to stop Cairoli’s winning habit, and even Herlings might find things a little tougher against Ferrandis, Gajser, and company.  But Herlings should be able to clinch his third World Championship in row in two weeks time.