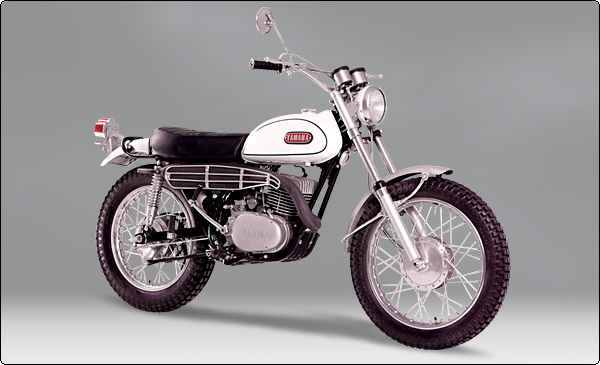 For GP’s #100, I thought we would take a look back at one of the most influential machines in motorcycling history – the 1968 Yamaha DT-1 Enduro.

For GP’s #100, I thought we would take a look back at one of the most influential machines in motorcycling history – the 1968 Yamaha DT-1 Enduro.

(Matthes note: ONE HUNDRED GP CLASSIC STEEL’S BRO!!!! That’s awesome, Blazier does such an awesome job with this column and he really puts a lot of work into them as well. Check out his archive to see if one of your favorite bikes are in there and thanks for reading this and other Pulpmx Stuff. And oh yeah, thanks to Blaze for the hard work!)

What if I told you that the most important machine in American motocross history was not a thoroughbred race bike, but actually a lowly dual-sport? That is right; Ryan Villopoto, James Stewart and Chad Reed owe their mega-bucks pay checks not to some sexy two-wheeled Ferrari, but to a simple, inexpensive and unassuming piece of everyday transportation.  A machine so well conceived and so perfect for its time, that it ignited an off-road revolution.

In the early 1960’s, off-road motorcycles basically fell into one of two categories: fragile and expensive purpose built racers, or street bikes suitable for gravel back roads and little else. At the time, off-road pleasure riding was a uniquely American endeavor and the thought of a bike that could do well both off-road and on was an alien concept to the manufacturers from Europe and Japan. Over there, wide-open spaces were rare and most off-road riding had to be done on closed courses.

As a result, the bikes from Europe tended to be very specialized. Across the pond, Motocross was popular, and their off-road offerings were far more performance focused than the average desert rat was looking to live with. They had light and powerful two-stroke motors, cutting edge suspensions, and price tags to match. The Husky’s, CZ’s and Montesas of the Old Country all offered blistering performance, but they were difficult to get parts for, finicky to own and hard on the wallet.

Another option for off-road enthusiasts of the day was the big British twin. These Triumph and BSA machines were light by street bike standards and could be made to work decently off-road with a little elbow grease and ingenuity.  By stripping all their street running gear and adding some knobby tires, these bikes could be turned into pseudo race machines known as “desert sleds”. In the sixties, these thundering 350-pound monsters were actually popular and a common alternative for desert racers on a budget.

In 1966, one of these racers was a Yamaha employee by the name of Dave Holeman. As a motorcycle enthusiast and a big fan of desert racing, Holeman looked at the wide open spaces of the American West as a huge opportunity for his employer.At the time, the Japanese had very little presence in the off-road riding arena. Most of their offerings were lackluster performers, with impressive sounding names like Big Bear Scrambler. These “scramblers” were in fact, little more than street machines with trials tires and “up” pipes. On road, they worked well, but off road, they were a disaster.

In the spring of 1966, Holeman talked a fellow Yamaha employee by the name of Jack Hoel into accompanying him to some desert racing events. An accomplished scrambles racer in his own right, Hoel was the son of Pappy Hoel, the founder of the Black Hills Rally. After attending a few of these events, Hoel and Holeman formulated a plan to get Yamaha in on the off-road market. One look at the crude and cobbled together assortment of machines being raced across the Mojave was enough to convince them that there was a demand for an inexpensive bike capable of being raced with minimal modification, and then ridden to work on Monday. Best of all, as the head of research and development for Yamaha USA, Hoel was actually in a position to make it happen.

At this time in history, Yamaha was far from the racing powerhouse they would grow into in the 1970’s. While the Yamaha Corporation itself dated back to the 1880’s, the Motors division was barely a decade old in 1966. They had introduced their first production motorcycle in 1955 (a 125cc DKW rip-off dubbed the YA1) and built their success on producing small and inexpensive two-stroke runabouts.

Three years after rolling the first YA1 off the production line, Yamaha had made its initial foray into international “off-road” competition by entering the 1958 running of America’s most prestigious motorcycle racing event – the Catalina Grand Prix. Held on the small resort island of Catalina off the coast of Southern California, the Grand Prix offered a unique course that included city streets and mountainous gravel roads. Riding a modified twin-cylinder YD250 two-stroke street bike, Fumio Itoh piloted his Yamaha to a very respectable sixth in the race.

As Yamaha entered the 1960’s, their racing interests focused on road racing. Both Suzuki and Honda had enjoyed success on the world stage with their high revving small-bore road racers and Yamaha was quick to jump in with both feet. At the time, motocross was not even in the conversation in America and mearly a curiosity in Japan. The grueling sport was popular in Europe, but all but unheard of outside the Old World. As the decade progressed, however, the Japanese became more interested in expanding their racing efforts.

In America, Hoel and Holeman looked at this increased interest as an opportunity to implement their vision for a truly dirt worthy Yamaha. When Hoel approached the brass at Yamaha, they liked the idea and green lit a program to research a new dual-purpose machine, specifically for the American market.

Once they got the go-ahead, the first thing that Hoel and Holeman did was buy every dual-purpose machine available at the time. They took apart Bultacos, Greeves, DKW’s and Montesas and studied what made each tick. In the end, the team ended up with a cobbled together conglomeration of Bultaco, Montesa and Yamaha parts. It did not run, but it would give the engineers a good working sketch of where they wanted to go with the design. Once they had the rough outline of what would eventually become the DT-1 mocked up, they approached Hamamatsu for their feedback.

Yamaha was so impressed with the mock up that they immediately flew six engineers to California from Japan to work on the project. The team hacked, welded bent and fabricated away on the mock up and sent ongoing reports back to Japan. After a few weeks testing in the California desert with Hoel and Holeman, the engineers flew back to Japan with tales of the crazy Americans and their desert bomb runs.

Two months later, two crates arrived from Japan with the first two prototype DT-1’s ready for testing. Yamaha USA enlisted desert racing star Neil Fergus to shake down the new machine and set about making the bike a reality. Fergus and fellow tester Gary Griffin spent the next six months pounding prototypes to dust in the California desert, while Hoel and his team took detailed notes on what worked and what broke. By the fall of ’67, the team believed they had the formula nailed, and Japan set about bringing the all-new Yamaha DT-1 250 Enduro to market.

Right from the start, the enthusiast press knew Yamaha had something special on their hands. The DT-1 was truly an all-new type of off road machine. At $580, the new “Enduro” undercut its expensive European rivals by several hundred dollars and for that paltry sum; you got reliable electrics (something not found on most machines of the day), Autolube injection (a major innovation at the time), a powerful two-stroke motor, full instrumentation and quality throughout. Because the DT-1 was designed from the beginning to be a dirt bike, its performance off-road was a quantum leap better than anything else ever offered from Japan. The best from Europe were still a notch ahead, but the gap was no longer a cavernous gulf. On the road, the DT-1 was likewise a step down from a pure street bike, but far better once the pavement ended than any road bike in dirt drag.

The DT-1 was the first bike to really nail that balance between dirt and street and gave birth a new idea: A good dirt bike makes a better street bike, than a street bike makes a good dirt bike. The DT-1 was attractive, reliable and with a little work, a capable race mount. Once the bike actually hit dealer’s floors in March of 1968, the little white beauties sold out immediately. The initial 8000 units flew off dealer’s lots and within a short amount of time, Yamaha was selling 50,000 DT-1’s a year!

While the DT-1 was a revolution in many respects, it was not perfect. Power was decent for a trail mount or commuter, but not arm stretching by racing standards. The shocks were terrible, the forks mediocre and the handling twitchy at speed. Of course, due to the bike’s incredible popularity, the aftermarket quickly addressed all of these issues. Yamaha itself jumped on the bandwagon with a power-up package they called a GYT (Genuine Yamaha Tuning) Kit. The GYT kit was comprised of a high-performance cylinder, head, single-ring piston, carburetor and expansion chamber. The kit jumped the horsepower from a mild 21 to a fire breathing 30, but did nothing for the bike’s sub-par suspension and spooky high-speed stability.

The best things about the DT-1 were its anvil-like reliability, affordability and versatility. It was a bike that could be striped of its lights on the Saturday, raced on Sunday and then ridden to work Monday. It always started (no mean feat in 1968), looked great and didn’t kill your bank account. With the addition of some Girling shocks and a Webco fork kit, the little Dit-One could actually be a decent motocross racer. If you added an extended swingarm to tame its high-speed wandering, it could even be a decent desert mount. Ironically, the only discipline it was not particularly adept at was Enduro racing, where the stock bike was too tame and the kitted bike too rowdy.

In 1968, the DT-1 was a revelation, and within a few years Yamaha would have 60cc, 125cc, 175cc and 360cc versions of the bike for sale. It made racing accessible to an all-new generation of kids looking get into the exciting new sport of motocross. It was the right bike, at the right time and would kick off an explosion in off-road sales in the late sixties. A highly modified DT-1 (the genesis for what would eventually become the first YZ) would even take Gary Jones to America’s first National Motocross title in 1972. The Yamaha DT-1 250 Enduro may not have been blazing-fast, über-exotic or super-sexy, but no other machine in history has done more to further the growth of our sport than Yamaha’s little white dual-sport.

For your daily dose of off-road goodness, make sure to fallow me – @TonyBlazier on Instagram and Twitter.