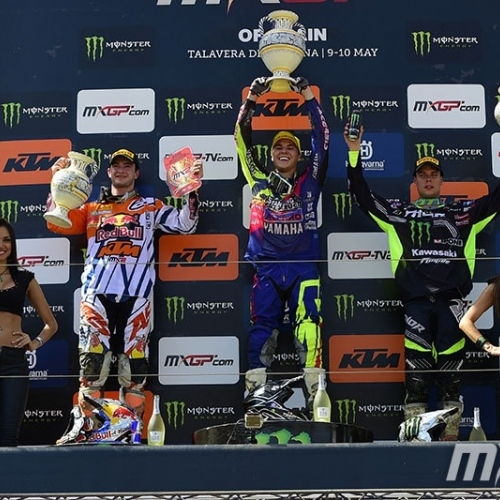 In blistering sunshine on the tight and twisty, hilly old-school circuit of Talavera, Antonio Cairoli bounced back in style from a horrendous Dutch GP to win in Spain and re-launch his attack on the 2015 world title.

Cairoli rode to a solid third in race one behind an imperious Nagl and Desalle but in race two Cairoli took the holeshot and looked to be checking out. But no-one told Romain Febvre! The Frenchman caught and passed Cairoli, then with a two second lead, the Frenchman stalled his Yamaha and Cairoli re-took the lead. From there Cairoli upped his pace and Febvre couldn’t come back at the Italian.

Cairoli took his first GP win of the year the first time he switched to the 450 and immediately dedicated the win to his late father who passed away last year. The 2014 Spanish GP was sadly the last GP Cairoli’s father attended before his untimely death and Tony badly wanted to win this GP in memory of his father.

Regarding his decision to race the 450 Cairoli said: “It was the right decision, I should have started the season on the 450 because I was testing a lot this winter. But at the last moment because I wasn’t feeling so good physically (due to his knee injury at the MXDN) so I chose the 350 because it was a bike I know. But we kept testing on the 450 and with the tracks moving in a different way, with more flat places and you can put down the power, it’s easier and less risky on the 450. I’m happy to win and hopefully more can come.”

Max Nagl didn’t have the best Saturday yet again but by Sunday he was back on form. He took a hard fought holeshot in race one and despite pressure from Desalle made no mistakes en route to the win. In race two Nagl settled for third when he saw Cairoli and Febvre pull away but crucially for Nagl he tied on points with Cairoli and made points on Desalle in the championship.

Nagl: “I have never been in this position in my career (leading the championship like this) so I really want to go for it and I will do everything for it.”

Romain Febvre made his first ever MXGP podium in the main class and was understandably happy with his performance despite his stall in race two. With each round Febvre is getting more and more confident and the hard pack tracks are suiting his style perfectly.  Febvre can win a GP this season, and not many would have said that at the beginning of the year!

Clement Desalle had yet another brilliant ride in race one to second place behind Nagl but in race two he made his first big mistake of the season. The Belgian crashed on a small finish line jump and was lucky  not to be hit by on-coming bikes, he re-mounted quickly and finished fifth. Desalle is now 12 points behind Nagl and 18 ahead of Cairoli.

Gautier Paulin had a terrible weekend even though he was riding good enough to podium or win! Bad starts and first turn crashes ruined the Frenchman’s weekend and he was understandably very frustrated at losing so many points to Nagl just after it looked like he had got himself back into championship contention.  Paulin is now 51 points behind Nagl after losing 15 points to the German (and Cairoli) in Spain. You just can’t lose that many points in one go when it is so hard to make them back up.

Two overlooked but impressive performances came from Kevin Strijbos who came back to the GPs after a wrist injury and recorded a sold eighth overall while forgotten Italian Alex Lupino finally got his form back with a brilliant tenth overall on the Assomotor Honda.

MX2 saw Valentin Guillod win his first ever GP, and not even the Swiss expected that! Guillod was a strong sixth in race won and had been loving the track all weekend doing some epic scrubs. But race two was where he really shone. The Standing Construct Yamaha man got away second behind Ferrandis in race two and hounded Ferrandis for the whole moto before finally making his move with just a couple of laps to go.

Guillod was overjoyed with his moto win but didn’t actually realise he had won the GP until his team told him after the race! After all it’s not every day you win with a 6-1 score! But it was great to see someone so genuinely happy and emotional about fulfilling a childhood dream after years of hard work.

Jeffrey Herlings won race one after fending off a spirited Max Anstie, a clever Herlings upped his pace in the final two laps to put any notion Anstie had of winning out of the Englishman’s head!

In race two Herlings got away just inside the top ten then threw it away big time over the bars on a jump after getting sideways before take-off and was lucky not to be injured. Herlings fought brilliantly through the pack with a bent-up bike to claim seventh just one position short of still getting the overall victory. But Herlings did increase his points’ lead on Ferrandis.

Herlings: “Max closed up a bit (in race one) but I knew it was a hot race and I wanted to save some energy, so I just did my thing and it was pretty easy.  I screwed up the start (in race two) but Ferrandis came over on me hard, I don’t know what that guy is thinking sometimes, he has a serious problem. I had a serious crash when I was coming through but it was 100% my own fault and I am happy to walk away safe.”

But since then Ferrandis has subsequently revealed he is out for the season: “I was not confident when I left Talavera on Sunday evening, as I had pain in my left leg after hurting my knee during the warm up and again in the second race. I had exams today and they revealed that my ligaments are broken and the meniscus is damaged, so I will have surgery this Thursday. The season is finished for me, unfortunately…. Thanks to all the people who support me, in the good and of course the bad moments as your support is always important!”

That gives Herlings effectively an 84 point lead over his teammate Jonass, with Tim Gajser 92 points back as the second nearest challenger!

But Gajser was flying in Spain, a bad start in race one left him at the back of the field and he charged through to get into eleventh. Tim started inside the top ten in race two and put on an incredible charge through the leaders to end up in second right on the back wheel of race winner Guillod as they passed the chequred flag. It was a superb ride and if anyone is going to give Herlings some trouble this season in a straight up race it will be the Slovenian – he just needs to get away at the front more often.

It was Jordi Tixier however who got the last step of the podium with a 3-4 result and again looked strong all weekend. Tixier was frustrated to not win the GP after Herlings’ crash but his form in the last three GPs shows he is getting closer. He rode well all weekend in Spain.

The MXGP teams now head to England for the British GP in two week’s time and Cairoli will be hoping to start clawing some points back on Nagl on what is one of the defending World Champions favourite tracks.