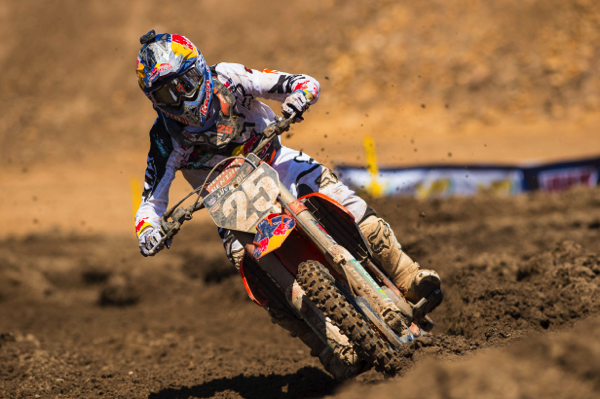 Poignant words on the day that was Washougal.

Poignant words on the day that was Washougal.

You didn’t get the overall but you tied and this is one of your places you needed to make points on, so good day overall.

Yeah, for sure. And the wrist is feeling really good. It’s been a long time I had a week like I did this week. Franky came down and then the wrist was feeling good. I had a great week in Florida. I really felt confident coming to Washougal, and knowing I won last year, 1-1. It’s a cool track and I love it. I was really looking forward to Washougal. It was really muddy in the first moto. It was a great battle with Cooper and I beat him. It was really cool. He got mad at me.

He did get mad at you. Did he say anything to you?

Yeah, he said something not really cool. Pretty intense after the first moto, but then actually after the second moto he apologized. He was like, I know you’re battling for a championship. It was a three point difference 1st and 2nd. I know Jeremy was not right behind us. So good day overall. That second moto I wish I could have made some time on those guys and battled with those guys, but I was trying so hard and making a lot of mistakes. Then I finally got a little bit better at the end and rode smoother. I couldn’t catch Cooper but Jeremy went down so a little bit of luck on my side today.

That happens though, on the other end of you, right? Look at last week, Millville first moto you could have won that one. I wrote about it this week and said you might lay awake at night if you lose the title and think about that, because you were looking good. How disappointing was that?

So many things happen during a championship. It’s twelve rounds. If you look back at every single moto and you’re like, oh, maybe I could have passed that guy, maybe if I didn’t crash… But I shouldn’t do that. I should look forward and try my best and obviously it felt really good to be myself today. The last two races have been really tough on the wrist. Not practicing during the week, it’s hard on the weekends. This weekend was great so I’m looking forward to the last three and finishing strong and try our best. That’s all I can do.

I see you’re wearing a wrist brace now. Is that new or is that old?

No, it’s new from actually this week and it’s really helping.

I think I saw it on the starting line. They showed a shot of you.

Yeah, it gives me a lot more support so I want to thank Donjoy for give me that brace. It’s really good right now.

Motocross of Nations team for France, anything new?

Vuillemin? That was after Vuillemin.

I don’t know. I just remember it was Ricky and Tony Bellamy. So great memory over there. So if I can get picked it’ll be sick.

You, Gautier and Romain should be a pretty strong team.

Barcia rode great today and probably should have went 1-1 but you’ll take it, right? You kept the heat on him and that’s what happens.

Yeah, absolutely. Barcia, he’s riding good. His bike looks better. He looks comfortable on it and in return he can go faster. And he’s been consistent too. His starts have been really good.

How frustrating is that? You’ve been looking at him after the first turn I think six motos in a row or something.

Yeah, I need to work on my starts a little bit and not let him get that edge. I’m eating roost. It’s not ideal but like you said I’ve tried to keep that pressure on him and he ended up making a mistake. So we were able to get around him. Got a gift definitely but it’s racing. I tried a few things today. Didn’t really chase it but definitely think things could have been a little bit better bike setup-wise but for the conditions I wasn’t complaining at all. It was so slippery. It wasn’t pulling the rear in.

It could have been a disastrous day, easy. Second moto you were about one, one and a half behind him for a lot of times and all of a sudden I looked up and it was four. What happened or what went on there?

That was about a little past the halfway mark and we ran into lappers and the guys just did not move. No excuses, but I got stuck behind him. Barcia ended up getting ahead of him and then we went into a turn and the guy didn’t know I was behind him. It is what it is. But I lost some ground and then I was trying to really put my head down and get him back, get that time back.

Well, it’s just one of those tracks that I do enjoy. It’s nice. The place is amazing. Where we race in the trees up in the hills and the elevation and stuff like that. But this track, I grew up on this one track and it’s kind of similar. A lot of throttle control.

I used to race District 23, what track?

No this was just a private track somewhere out in the boonies. Not many people have ridden there. But at a young age I was like, it’s not rough, it’s not demanding, but it takes a lot of throttle control, that drifting. And I worked on that like you wouldn’t believe. It kind of relates here. A lot of throttle control. A lot of outside-in. You’ve got to set yourself up multiple corners before you get to that corner. This track is not one you can ride all too intense and rush it. It’s more like give up a little bit. It just suits my style better I think.

When I was a mechanic I can’t tell you how many times I heard riders complaining about their tires here though. I guess you’re used to it, but it’s a little different feeling.

On a normal Washougal day I wouldn’t complain. Compared to today, we were looking at, geez, where is the rear tire? I don’t think anybody’s rear tire was feeling good. You made one change, that’s too much. You do another change, it’s like you can’t find a happy medium so you just got to race and be smart and ride the bike as best as you can. But today, man, the conditions were so slippery, to the point where a lot of times you’re on the gas and you’re riding a gear taller just to get that drive.

Very unlike you for qualifying time today.

The second lap I didn’t take advantage of it because I didn’t know it was the green flag start of our times. So I took it easy that lap. Well then the next lap I got on it.

It was that small of a window?

Yeah, seriously, from then to there. And I ran into a couple guys. It could have been maybe a couple seconds. The fastest was a 2:12 and I was a 2:16. The window went fast. And then it drizzled a lot INAUDIBLE. So it’s kind of good that we got all that rain. It was definitely tough to ride through but it was good it stopped, because racing in the conditions, especially with the terrain and then you add the water on top of that… oof.

As a goggle guy, I do some goggle stuff, it’s the worst conditions for goggles. The mist. You’d rather have it just pour or stop.

The goggle boys did good today.

5th overall, good job. Good starts were really the key for you today.

Yeah. I don’t know. The way practice started out I qualified 21st. I told the guys I was going back to the hotel because I wasn’t even going to race. J-Bone was just like, what are you doing out there? This is the shittiest I’ve ever seen you ride. I’m just like, yeah, I don’t know what’s going on. And then there’s a good gate on the inside, I don’t know why anybody didn’t take it, and I was 21st gate pick. I thought for sure I was screwed.

Yeah, that’s odd to get the inside at all.

I was just like, well screw it. Even if it was sort of bad I was going to take it anyway. And then I had a killer jump and I just left the guys. And then dang it Barcia just edged me out again on another holeshot.

I know, it wasn’t much. But it was still good because I didn’t want to be 12th. So that gave me a gap to get away from people and run his pace a little bit. And then lappers were pretty gnarly today. I understand it’s hard to see who was who out there, but just wave the blue flag for shits and giggles you know. I don’t care. They’ll get the point. Baggett and Anderson were coming pretty hard the first moto so I was lucky to get 4th. Then second moto I ended up 6th. And then I think Roczen beat me out for 4th by a point or so. It was okay. I don’t really like Washougal but it was all right today.

You don’t like Washougal but today wasn’t even really Washougal with the weather and the mud and everything.

Yeah, it was tricky.

No, not even close to ‘Dilla. I don’t even know what that was. It was like ice in some spots. But it just came down to really good starts. Obviously you can tell, second moto same bikes were up front, blue and KTM.

Yeah. So everyone’s kind of got some stuff figured out. And our bikes are awesome. Dean Baker does an awesome job. Johnny Ohler did a shock change with me which helped a lot because I was struggling so bad in practice. But it’s good. I’m going to enjoy the weekend off. I got to go to Loretta’s Wednesday and Thursday.

I ride the new Yamaha.

Why you? Send Barcia.

Well I was going to go anyway to watch the Club guys race and then I guess since I was going kind of made sense. I don’t think they really wanted to go, so send Phil. That was okay. It’ll be fun. I’m looking forward to the weekend off.

Congrats on having the best tweet of the week when you tweeted something about thinking positive and how bad that is for you. I love that. That was so you.

It’s got to be an almost proven fact.

Yeah, Uber Facts. So I’m sold with it. It makes sense for me.

Thanks, Filthy. Good luck getting out of here. You’re not going to move at all because Knowles hasn’t moved at all and he left a long time ago.

I can talk to the Martin brothers about their day and try and fix their starts.

Talk to Jeremy about Cooper, see how that’s going.

A Dream Weekend With The King

Swizcorner: "It's all bullcrap"