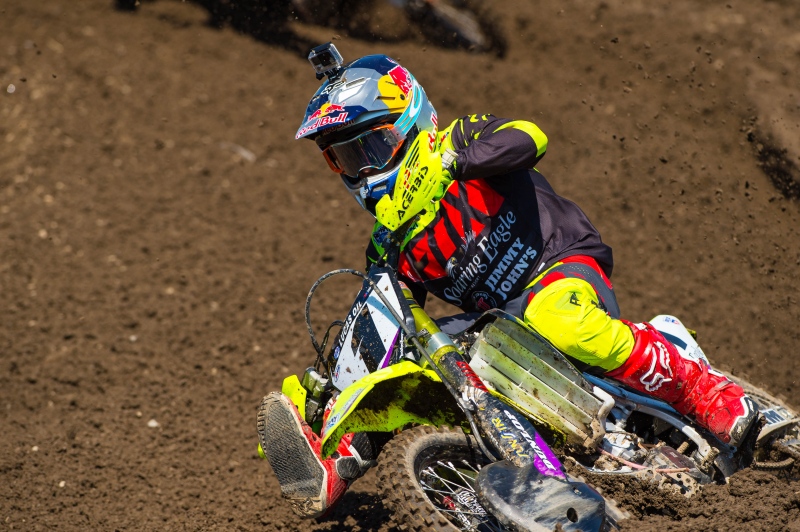 Some of the key players from Saturday’s race speak…

Some of the key players from Saturday’s race speak…

Jim Holly here. Kenny, I want to ask you… I don’t go to a lot of the outdoor nationals but I see a change in you today. Even though you went 2-2, you led a lot of laps and things. What did you change differently on the bike?

Well, it’s been also even last weekend it’s a puzzle piece that was missing. We’ve been going through a lot of struggles this year, and I have the same setting. I actually did some testing back in Florida and stuff but it just didn’t work out. I rode the first practice and it just wasn’t the right thing. Basically went back to my Unadilla setting, just a little tune. It’s not ideal but it seems like that’s what I feel the most comfortable with right now. So that’s basically just what’s up. My body has been feeling good the whole time, it’s just other struggles with the bike and a bunch of things that now run a little bit smoother. I feel more back. I feel more like myself and I enjoy going out. I think it shows in the results too. It’s about getting the puzzle pieces together. Unfortunately the season is over but it’s still good that we figured something out a bit rather than nothing.

One of the pieces of the puzzle, I got wind, I was over at your camp today and I was talking to a few of the guys. They said Kelly, not going to work with you, he’s going to go back to KTM and you’re going to have Oscar spinning the wrenches for you next year.

Yeah, I think that was a big thing. Oscar’s really smart and he’s been in Florida. We’ve been doing a bunch of chassis and suspension tweaks. He’s really good. I really like it a lot. We have it now to where I can go out and ride and kind of know what the bike does. Before we were from the beginning on just kind of completely off and we need a complete overhaul to just find ourselves again and have something that feels decent.

Talk about the front end. I was over talking to some of the mechanics. You’re not using the air forks?

No comment. I can’t really say a whole lot about it. It’s a lot more fun to ride and it’s more predictable for me. I finally feel like I can turn and I feel a little bit more like myself out there. Obviously Ryan is really strong right now and he’s really confident, but I think if I could have had what I had now from the beginning on and not have an injury and stuff I think it would have been a whole other story. But he did great this year and the KTM team too. So it is over and the season’s over too. I’m bummed that I finally now just started picking things up and everything but, like I said, better now than never. It’ll give us a little bit relief for next year.

I’m going to try. I love the event, but I’m getting back surrey on the 31st, so I’m going to see how the recovery is going to be after that. I don’t think it’s going to be anything too crazy but you never know.

You lost today. You got 2-2. Ryan rode great. But you’re in a whole lot better place today than you were a month ago when all of us, me included, were going, what’s going on with Kenny?

Yeah, there were a lot of questions and he isn’t fit, he isn’t that…

Does it piss you off or no?

I don’t really care. Nobody knows what’s going on. Physically nothing has changed from two weeks ago, even three weeks ago. The rider and the bike and the team have to be one piece and that’s just what has been missing. And it’s hard for me because I can say a lot of things and if people or not is something else, but then again we did a change in Unadilla and I was like, wow, I can actually turn! I was actually pretty pumped. After first practice I wasn’t too happy again. I struggled the whole time. I came in, I’m like three seconds off the first. I’m like, great. The start’s great. I made a change, I come out 7 tenths faster. I was leading the practice.

And then in the first moto when you got up you were fast.

Yeah, and I didn’t have a front brake. There were a lot of spots where I was like, man, if I could have actually turned normal and had a front brake I would have caught up pretty good. And then obviously in the second moto we were hauling ass the whole time. And now this week again we had two good motos. Yeah, I got 2nd but it’s a big improvement. If you look a few weeks back it looked a whole lot different.

That second moto, wow, that was awesome, man! You admitted last week at Unadilla you were tired. Late in the second moto I think you set your best lap. You got Canard. You got to be pumped with the way the day ended.

For sure. I’m really happy with the second moto. Not so much with the first moto but I kind of had a good feeling all today and I’ve been in a really good mood. I kind of felt good. I actually got a good start in that second one so I could try and run up with those guys. I was running 4th for a little while and then Blake passed me. And then when he passed me I kind of was following him for a bit and then Trey got around me. So then I kind of just regrouped and then I kind of started to reel Trey back in and it gave me that on the mental side. Like, hey, I think I can pass him back. So the last couple laps I kind of just hung in there and then the last lap I kind of sent it and passed him. So that was really exciting for me just because obviously we seen last weekend and just improvements I’m making. So as long as I keep improving I’m happy.

How was the fitness, better than last week?

For sure. The fitness was really good. I think last week I was just a bit nervous and tight. But we’re making steps and that’s all that really matters to me.

Nobody I talked to really likes this track but what do you think? What are your honest thoughts about it?

It’s not great, to be honest. It’s like a replica of Elsinore, it reminds me of. But they did their best and I got good starts. I wasn’t eating the roost which makes it a lot more enjoyable. So I just got to keep getting good starts and I’ll be happy.

First of all, you’re taking off, you’re leading. You come around, you see a red flag second moto. That had to suck, but you redeemed yourself with some great riding. But first of all the red flag, you’re probably not happy.

Yeah, I was definitely pissed when I saw the red flag. I was like, come on, what happened now? I was out front and that’s where you want to be, especially after moto one was just a struggle. Just terrible out of the gate and then got pinched and then some guys went down. I was literally stopped.

I didn’t like that gate pick, by the way.

Well, I wanted to go inside because the dirt seemed a little more firm.

Not as tilled up or whatever.

There was a line where the tiller had missed, and I’m like, it’s kind of risky but I’m like, dude, look at this. I just got to get the jump and I’m fine. But I shouldn’t have done it.

Then you didn’t get the jump and then it was over.

Yeah, it was terrible. It was a crazy day today and to be able to get the win in moto two there was awesome. It was unfortunate the red flag did come out but obviously we had a rider down and it’s most important to take care of him, and they did and we were able to get back out there and get a top five start and get the job done.

First moto though, you’re always really strong in the last five, ten minutes or whatever, and it just wasn’t the same Jeremy that we’re used to seeing out there. What was the issue do you think? The first moto coming through the pack, you just weren’t coming through as fast as one would think.

The first two laps it was so wet and there were so many people going everywhere. In practice I was like, well that line was terrible. And this guy’s in the line I want to be in. I was just getting plastered. And then I was like, okay, we need to get going. I’m like geez, this is terrible.

You were like 12th for a long time and I’m like, okay, when’s he going to get going here?

I think I definitely would have been up there more if I would have definitely got going the first two laps but unfortunately I didn’t and I got really lucky. I got a gift from RJ Hampshire. You never want anyone to go down and he went down in the finish line corner and I was able to snake by him and get 3rd and go 3-1 for the overall today.

That second moto about five laps in you found some lines or you started getting a groove because you were going 2-3 seconds faster than the guys in front.

Yeah, I saw the 25 machine and I saw Coop out front and I’m like, there’s that quote that I’ve heard Floyd Mayweather say. I’ll die before I let… It’s getting down to the wire. I’ll die trying. I’m never going to give up. I couldn’t. I had to keep fighting. If I want to be in this championship I had to win that moto. It was good. I want to thank Coop, he stayed strong and helped me get my points back to where it was.

You won two years in a row here. Not a lot of guys like this track but do you like it?

It’s not my favorite.

You look at the dirt, you watch it on TV and it’s pretty gnarly. I’m sure we’ll probably be maybe somewhere else for next year but we all race the same thing. Not every race is going to be perfect. Last year I think the track was a little better because of all the rain. This year I honestly was surprised it was decent. I was riding during the week and we had an inch and a half of rain before Unadilla and I went and rode the main track at Millville. At the end of the day it was so gnarly I almost posted a photo and said, Utah ready. But we all knew what it was going to be like and we all have to ride it.