Moservations: Race to a Million 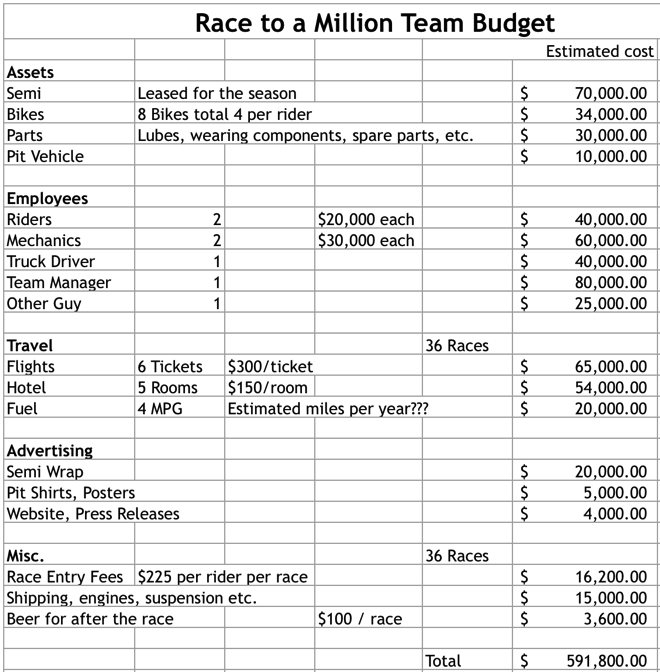 Anyone that is a fan of moto has at one time or another day dreamed about being a factory rider.

Anyone that is a fan of moto has at one time or another day dreamed about being a factory rider.

Once reality comes crashing down and you realize you will never be able to ride a motorcycle that fast the next logical step is to day dream about owning your own team.  When you walk through the pits you doesn’t admire the spotless team semi’s, the roped of “team only” awning and pit areas, and unobtainable team pit shirts.  Any good bench racing session touches on topics like “If I had a team I’d hire this guy” or “Team XYZ doesn’t know what the fuck they are doing if it was my team I would (insert drunken rant ________.)

How much does it really cost to run a team though?  A classic Watson quote is “if you want to make a million dollars with a motorcross team you better start with two million.”  One million dollars is commonly thrown around as the necessary start-up money if you want a team worthy of any respect.  Moto is like a bunch of good old boys they don’t exactly welcome newcomers they are more inclined to invite them out for the drinks on the 9th hole at 9:00pm routine (Happy Gilmore reference).

What is a realistic racing budget for a season, is one million dollars enough, where does all the money go?  I wanted to find out.  Recently Alan Brown, Thomas from N-Fab and Matthes talked about the cost of racing on the PulpMX show and that provided me with the perfect foreplay or bait (pick whichever analogy you prefer) to get Alan to help me put together a realistic budget.  Alan Brown had been around a long time and has managed, ran and/or owned several teams, he knows how much it cost to run a team and he knows how to do it without running out of money before the end of the season.

I put together what I thought was a pretty good budget, I knew I was going to be missing some things but I didn’t think I could be too far off.  Well I forgot a lot of things.

Alright so lets say I win a million dollars or some long lost rich uncle leaves me a some money.  Instead of paying off my house and investing the rest in mutual funds I say fuck it I want to have a race team.  We’ll call the team MoserMX.

I want you to run my team you’ve done this before you know all the ins and outs.

Attached is my hypothetical budget that I sketched out on a bar napkin after a couple pitchers of beer.  The goal is to have a two rider 450 race team to race the SX and MX series.  Consistent main event guys are what I want.

We’ll obviously need a semi, rumor has it you have some I can lease for the year.  Bikes I’m hoping we can get a deal through a shop where we buy four and get four free something like that.  Is four bikes per rider enough to make it through a season?  One for practice, one for SX, two for MX?  Even if we can get some sponsors from after market companies, exhaust, bars etc. we’ll need a parts budget I just guessed at the cost.  I’m not walking back and forth through the pits we’ll need some type of golf cart.  I assume motor and suspension mods aren’t free but again rumor has it you have connections there.

I’m hoping that if the riders get to keep their gear money that I can get them at a fairly low cost.  Two mechanics a truck driver and a team manager didn’t seem like enough personal, so I added one “other guy”.

I was too lazy to Google the total driving miles between all the races but I know a semi only averages around 4mpg.  The other items I’ve listed are all pretty self-explanatory.  I look forward to seeing the projected costs I’ve missed and to see where my estimates came in at.

I appreciate your insight.

Here we begin with my hypothetical, slightly alcohol influenced budget…