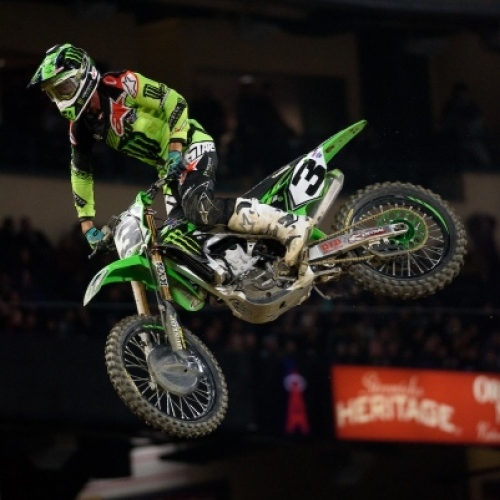 Remember back at the beginning of the 2015 Monster Energy Supercross season when the powers that be came up with the #whosnext? It was great in theory, Ryan Villopoto had just won four straight titles, and we needed a new champion. The only problem is that we forgot about Ryan Dungey. He was the champion before Villopoto and now after. A huge difference this year is that Dungey is dealing with some serious young (and old) star power this year.

Back in 2015 the stars of now were in their first or second year in the 450 class. The time has allowed the young guns to mature and come into their own in the premier class. Dungey has stuck to the game plan of course by landing on the podium and grabbing a win when it is there, but Eli Tomac has taken his game to a whole new level the past few weekends. If Tomac keeps going the next few weeks, then Dungey’s points lead will diminish rapidly and we’ll have a fight on our hands.

The thing is that Tomac’s rides have been pretty much out of nowhere. The first three rounds were absolutely terrible for the #3’s standards and the last two were nothing more than magnificent. Since Tomac came out of nowhere after struggling so bad then who is next? Besides Ken Roczen, Dungey, and Tomac we have not seen anybody else grace the top step of the podium this year. Who do you think will be the next guy in line to do so?

In recent weeks we’ve seen the emergence of Cooper Webb and he was in contention for the win last weekend in Oakland He eventually finished in third, but that means more confidence and more laps. Could Webb keep building and be that next guy? I personally think that Webb will win one or two main events this season, but I see it happening at least after Daytona. Although, I don’t think it would shock anybody if he won this weekend in Dallas.

Webb’s teammate Chad Reed could absolutely come back this weekend and score a win. His second place finish in Glendale showed that he has the speed to be up there after seemingly fighting with his bike setup for the start of the season. I would never bet against Reedy.

Next you have guys like Jason Anderson, Cole Seely, and Marvin Musquin who I feel could find the top step of the podium on any given night. Musquin is really going to be a force to be reckoned with on the East Coast tracks and should grab his first 450SX main event win this year. Despite the possibility of maybe five other riders being capable of taking home a main event win, this title chase is really only down to two riders: Dungey and Tomac. That is…unless someone else goes on a heater and wins several main events in a row. This is very much a possibility and you never know in this sport. Someone could find the elusive setting that just completely changes the face of the season and can at least play a spoiler down the stretch.

If I were a betting man I would put my money on Webb figuring out the class really soon and being that next guy. He’s currently sitting seventh in points, he’s fresh off of his first podium in the class, and he’s only 22 points off of Musquin in third. By the end of the series I think that Webb makes a case for third in the standings and shows everyone that he is for real in this class.

I’d like to keep this conversation going. You can email me who you think will make the next big splash at either troybendgen@gmail.com or troy@pulpmx.com. You can also reach me on Instagram and Twitter @troybendgen.

Oral History of the 1996 SX series