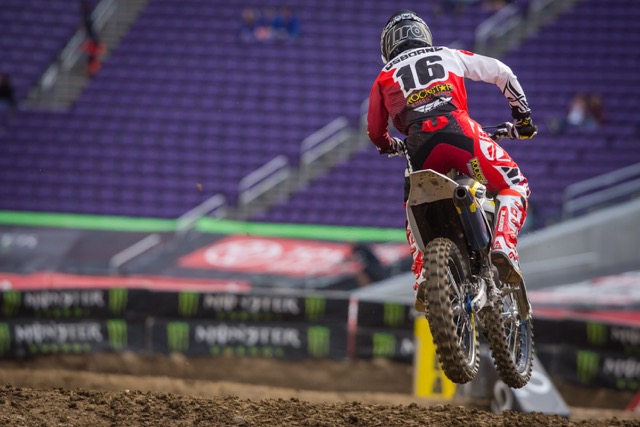 Things are about to get weird at the Factory.

Things are about to get weird at the Factory.

Things are certainly getting a little out of the realm of normalcy in the Ryan Dungey era. We have never seen what we have seen in the last two weeks. The guy who has always been a gamer for the full race duration (and then some), has seemingly been left a tad on the breathless side well before the checkers have waved in both Dallas and more shockingly, his home race in Minneapolis.
The theories on what is going on with Dungey are widely ranging. Everything from burnout, Epstein Barr/Mono and Ken Roczen’s crash being unshakeable to him just not being willing to risk a serious injury of his own on these 2017 beaten down tracks. We may never find out just what is the pinpoint cause for this new iteration of Ryan Dungey but the end result is the same through two rounds; his teammate, training confidant and friend, Marvin Musquin has gotten the better of him.
In Dallas, a holeshot and sprint to the checkers was a confidence building step that Marvin has been waiting to take since Victory was snatched from him on the last lap in Atlanta last year. It was a karmic payoff that Marvin had been dreaming of and with the way it went down, it was easy for Ryan to be happy for his friend, despite his own troubles in Texas.
This week in his hometown race though, Dungey started up front and was quickly into second behind the surging Eli Tomac and had hoped to stay with Eli and make a go at the W. Not only did Dungey uncharacteristically not latch onto Eli’s rear fender, Eli was quickly building a gap between his #3 and the #5 and just as quickly, it became apparent that Musquin was making ground and that Dungey needed to begin worrying more about what was reeling him in from behind.
When Marvin finally caught up to Ryan, he didn’t wait for Ryan to falter, he pounced and made a move that could very easily be considered aggressive when executed on a friend and the reigning series champ and perennial superior racer. What we have here is a genuine Ricky Bobby and Cal scenario from Talladega Nights. Marvin has finished runner up to Ryan numerous times and Ryan has obviously earned the reputation of being the superior in the relationship but now with whatever happens to be going on (either in actuality or perception) with Ryan Dungey, Marvin is staking his claim to victory and eager to no longer be considered “The Champs buddy”.
Both Ryan and Marvin are genuine good guys and they honestly, just may be the nicest two guys to ever deal with this scenario but they are certainly not the first. This episode has played out many times over the year is racing. Some of the most obvious were Rick Johnson and Jeff Stanton, then Jeff Stanton and Jeremy McGrath and of course Chad Reed and Timmy Ferry. Thee are always growing pains and if this two race trend continues, there will be growing pains here as well.
250 Thoughts—
It was refreshing to see the kickoff of a free-faced new series in Minneapolis. Some of the quick thoughts I had regarding the points-paying results are noted in the captions below.