I am going to hit you all with some truth right out of the gate here. I wasn’t a fan of Race Tech suspension back when I last tried it in 2006-2007’ish. I couldn’t find a setting that I liked because it was either too mushy feeling or had a harsh feeling near the end of the stroke. Fast forward ten years or so and I came into contact with Chris and Rob at Race Tech. They asked if I was available to help test some stuff and if I wanted to try a setting for my 2018 Honda CRF450R test bike? Honestly I was hesitant, but being a test rider I must practice what I preach and have an open mind to everything I try, so I accepted their offer and set my suspension off to Corona, California where their headquarters is located. It took them five business days to complete and my suspension was back on my bike and ready to rip.

Race Tech installed Gold Valves in the fork and shock. Here are a break down of different types of Gold Valves that are available for motocross and off-road applications:

• TYPE 2 – Smaller ports increase bottoming resistance for more extreme types of riding. NOTE: These Kits will be harsher than Type 1.

• For Aggressive Motocross, Supercross and Supermoto.

• G2-R – This valve offers the ability to change port size by changing restrictor shim diameter. It also has the ability to preload the valving stack for dive control. G2-R Damping Curves can be produced to mimic both Type 1 and Type 2 Kits. It can produce curves not available to T1 & 2 as well. The G2-R can be setup for any type of riding. It is the most versatile valve design in the world!

• Rebound Gold Valves – Many rebound valving systems are grossly inadequate. No matter what modifications are attempted, the forks will never perform with precision and control. These Kits offer the advantage of both adjustable Mid-Valve and Rebound. Available for most Dual Chamber Showa, KYB and WP Forks. 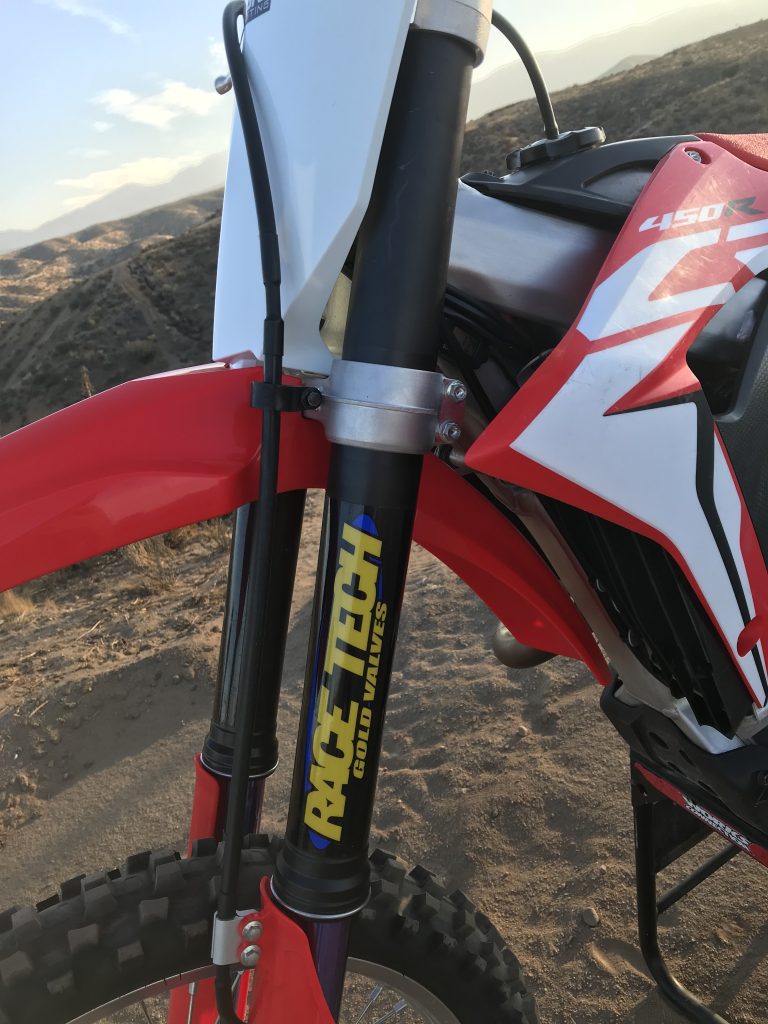 • For Aggressive Motocross, Supercross, and Supermoto.

Let’s get to the reason why you are reading this. Does it work better? Before getting on the Race Tech valved suspension I recently tested and spent time on the stock suspension, Enzo, Factory Connection and Pro Circuit re-valved sets. Although the 2018 stock suspension has a better balance than the 2017 CRF450R stuff I was still looking for some increased mid-stroke comfort in the fork and more damping out of the end stroke on the shock. The companies above provided me with most of what I was looking for, but I felt when the track got hacked out with square edge and chop, the sets I have tried felt on the firm side and was difficult to ride for a longer duration of time. With the firmer Honda chassis I wanted to get more comfort out of my suspension. 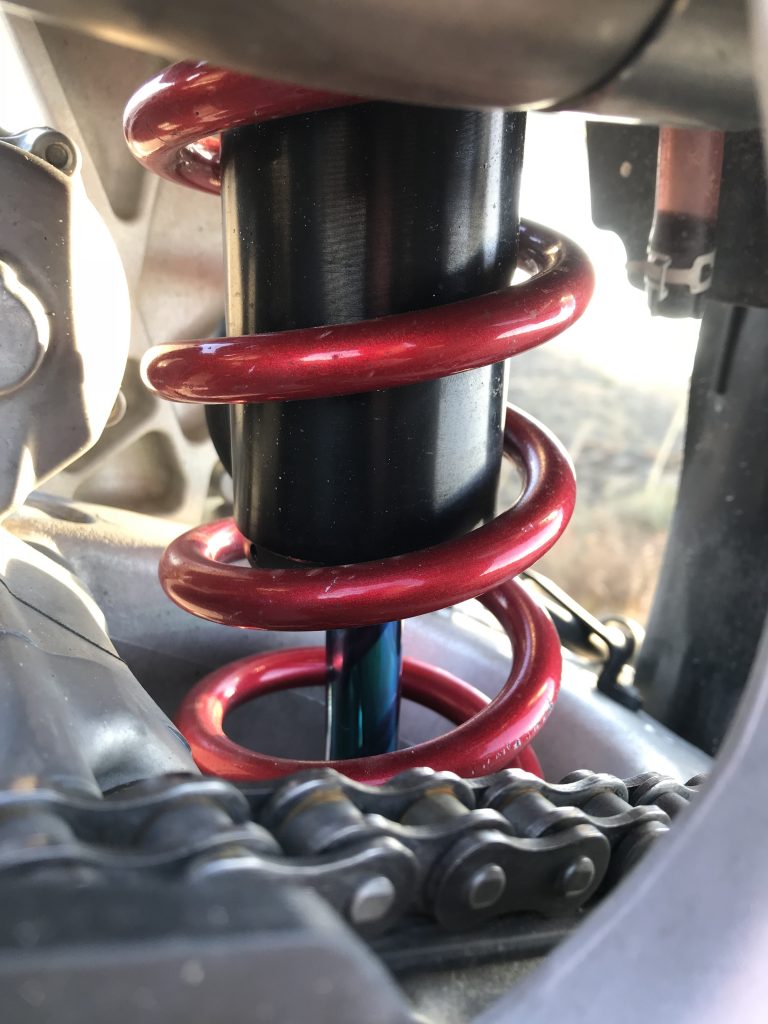 Race Tech Fork: Initially when I went out on the 2:00PM bumpy Glen Helen track I immediately thought the fork was moving too much in the stroke, but when I started to get my speed up and started to push, I quickly realized that wasn’t the case. The fork moved in the stroke, but never bottomed in an un-ordinary fashion on the track. What it did do was give me more front end traction than stock as well as any other setting I have tried to date yet. The front tire followed the blown out Glen Helen terrafirma better than I usually feel coming from a Honda. Usually I get some type of deflection and or pitching from the CRF450R fork late in the day, but to my surprise the fork had an ample amount of damping and increased mid-stroke comfort. I did slow the rebound down one click and stiffen up the compression two clicks for the downhills at Glen Helen. Doing this just helped keep my front end up a little more on steep grade de-cel. I ran the fork height flush at Glen Helen and 2-3mm up in the clamp everywhere else I tested. If you have big downhills running the fork flush will help stability and help combat pitching sensation. When going to some softer dirt with larger braking bumps the Race Tech fork feeling/sensation didn’t alter that much. The front end remained planted and didn’t dive under heavy braking. This helped me corner quicker and let me dive into corners harder. I could get aggressive with my technique and not have to worry about unsettling the chassis entering corners. Tracks with steeper jump faces I noticed I would like a little more hold up, so I am going to try and add a small amount of oil to see if this helps hold the front end up a little. I am only going to try 5cc. Yes, I can feel 5cc’s. Usually magazines go in 10cc increments, but to me that is too much. Pala Raceway in California has some bigger jump faces and is usually not the norm for a motocross track, so this is something that is an extreme case. All of the other tracks I went to the fork held up just fine. Note: Stock fork spring rate was used for my 170 pound carcass of a body. 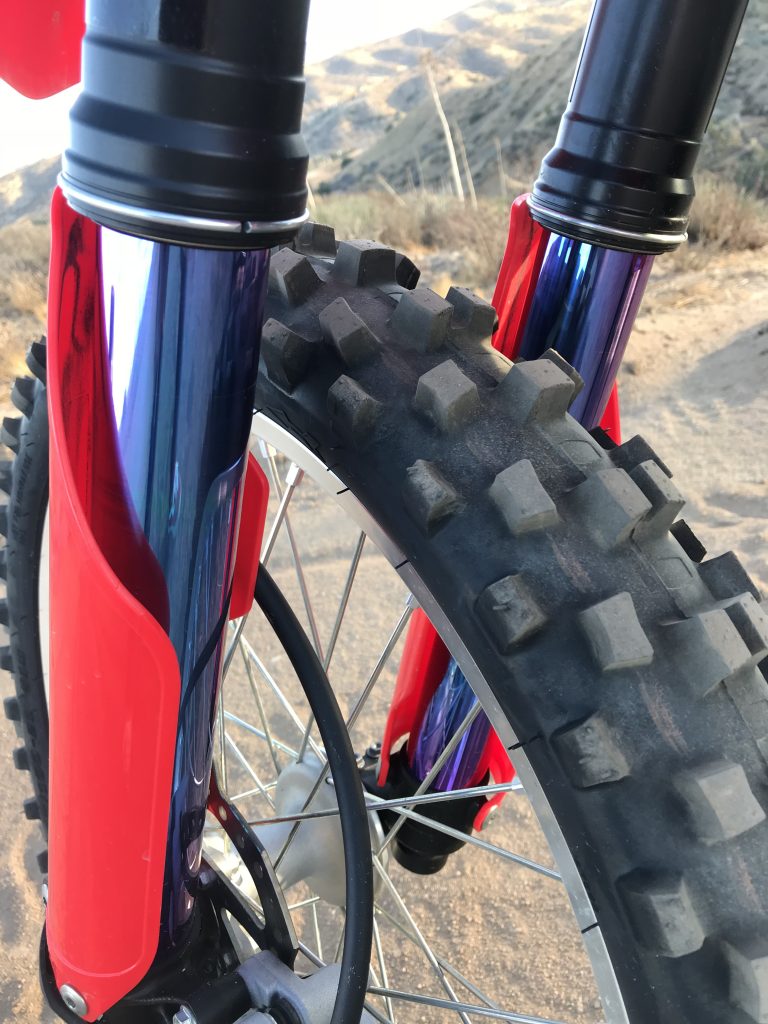 Race Tech Shock: On previous settings I ran a 1mm Ride Engineering link, but for a starting point with this test I went back to a stock link. Now as you can see I am on a Showa A-kit shock, but the only big difference between the stock shock and the kit shock is that the shock shaft on these kit shocks are 18mm in size, the stock shock shaft is 16mm. To me I prefer a stock shock as the 18mm shaft makes the rear end feel to harsh/rigid compared to the standard 16mm shaft. This was one of the things I wanted to try and fix when talking to Chris and Rob at Race Tech. I needed more comfort out of acceleration chop and while I did get increased comfort on acceleration (out of corners) with the Race Tech set up, the action of the rear end had a slower feel. Usually a slower feel is good where off throttle de-cel bumps form, but not so good when on throttle square edge bumps come into play. The Race Tech shock/rear wheel, much like the fork, followed the ground much better than with other previous settings. In order to get that feeling, I would of had to resort to the Ride Engineering link, but now I got that rear wheel traction with the Race tech re-valve and the standard link. When accelerating out of corners the rear end felt plusher and it cut the harshness in half when hitting holes and square edge. Let me paint you this picture for a moment; instead of feeling a harsh point or spike through the rear end of the bike four out of the five bumps with the stock setting, I now only feel maybe two. The rear wheel sticks to the ground and absorbs more of the junk down in the rut instead of getting a spike and wheel spin. If you are looking to never feel any of the bumps out on a track, you are going to be looking for that feeling the rest of your life. Why? Because that is not ever going to happen! If there are bumps on a track you are going to feel most of them regardless, however it’s in what degree you feel those bumps that makes a good set of suspension or a bad set. On de-cel/braking bumps the Race Tech shock had that dead feel that I was looking for and never reacted too quickly when staying on the gas longer into corners. If there was one negative to the shock it was that I wanted a little more high speed damping on steeper jump faces. I tried going in on high speed compression and it just hurt my acceleration comfort. It wasn’t worth the trade off for me. I decided on a sag setting of 108mm and that kept the bike balanced and working the best on all tracks and conditions.

Verdict: I don’t know if I was wrong about the Race Tech stuff in the past or maybe it’s just their settings/Gold Valves have evolved over time and improved? Whatever the reason is, I am pleasantly surprised with the first setting I received from them. I am going to send the shock back to see if I can get more high speed compression damping, but to me I could go race this setting on any track around these parts. This is the best Honda CRF450R setting I have tried to date and am looking forward to spending more time with this machine with this Race Tech suspension. Stay tuned as I will get back to you all with an update on the second shock setting.