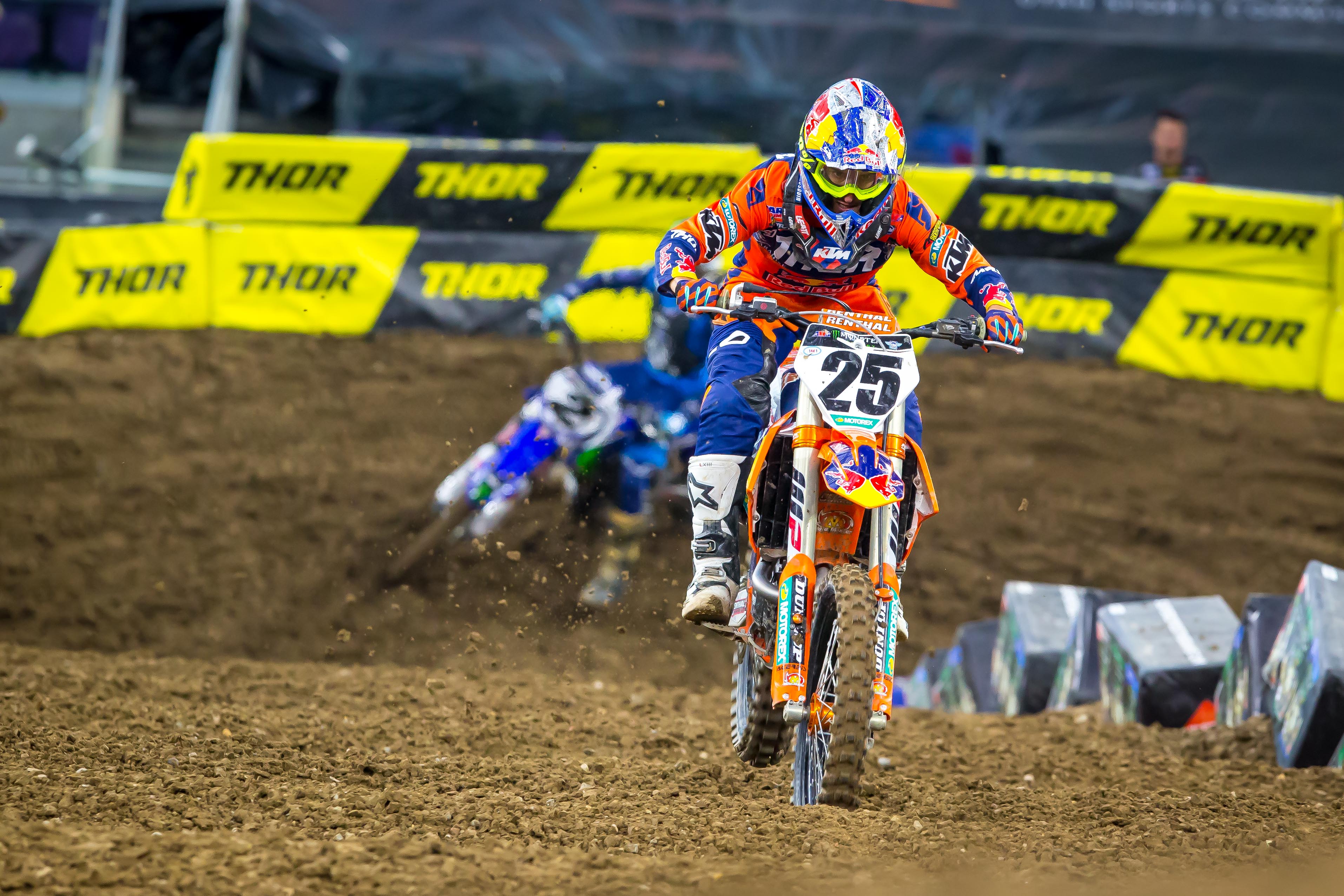 Ok, the Three triple crowns are done- what are your thoughts on the format- what do you like and don’t like?

I actually go back and forth on the format. As a fan and a guy who follows the sport closely, I like it a lot. I understand the scoring system and I enjoy seeing all the top guys together for 3 starts and 3 races. For a regular fan who doesn’t follow too closely, It could be a bit confusing. As a rider, I would hate the format of 3 motos with just a little bit of time to get ready, change from sweaty gear etc… But I’m a fan now and I actually enjoy it. Seeing there were 6 different winners in 6 different races tell us the format actually works and is doing what it’s supposed to do, shake things up. I’ve been saying for a year I’d be in favor of a 2 main event format with full points in each race.

But whichever way you turn the question and the debate, it’s always the same guys who win the races. It just makes it tougher on them to be fast, consistent and fit to perform 3 times in 1 night. I think all formats have their pros and cons but we’ll have to decide what to do. I don’t think changing formats a few times during the season is good in the long run. As a trail to try it out, I’m ok with it but I think it would be better to have the same format all year long. If you look at this particular 450 season, a Nascar chase-style format would’ve been more interesting for the sport. Not for Anderson obviously but for the rest of the field, the fans, the media and the industry, yes. 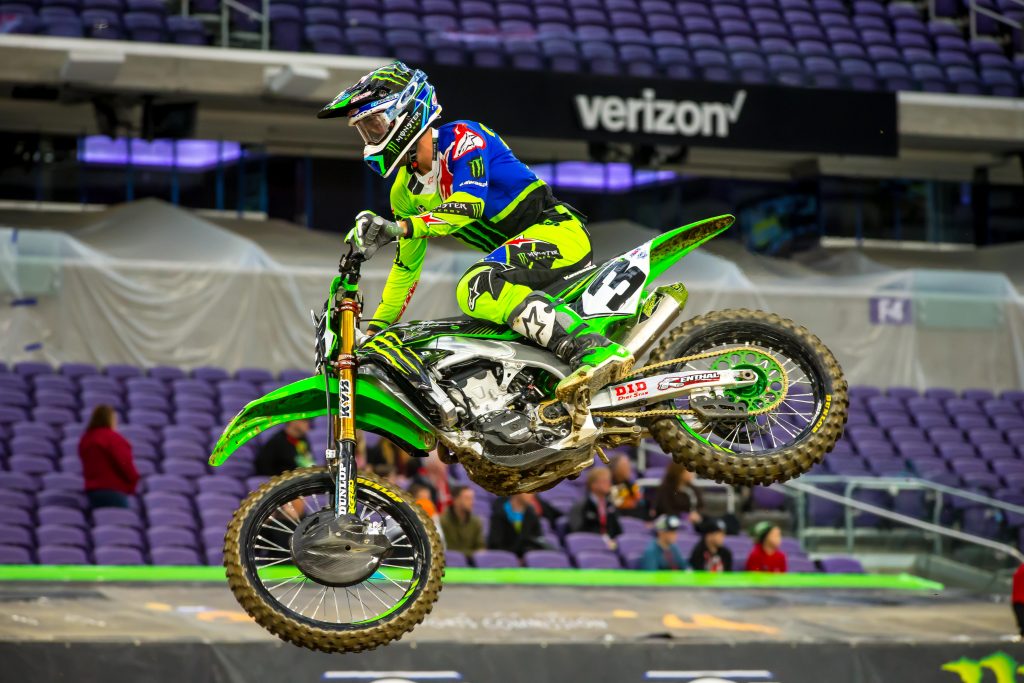 The track was technical but at some point the split lanes didn’t work out- what are your thoughts on the track we saw?

I don’t think the track was technical at all. There was not 1 difficult rhythm sections. Whoops were easy when new and got a little more technical when they got rutted and cupped out. It’s why we saw the guys jumping late in the second moto and in the third. There were a few ruts in the on-on table section but nothing out of the ordinary. Overall, the track was very generic and easy. The split lanes didn’t work at all early in the night. Track builders really need to put more thought into it. It doesn’t take a rocket scientist to see if you cut jumps in the inside of 2 consecutive 90-degree turns that the inside line will become way faster. Why would you cut jumps in the shorter line? They halfway figured it out late in the night program because they added a knuckle on the inside of the first 90-degree turn after the big triple. In the specific location they built the split lane, you had to favor the outside of the first 90-degree turn and leave the second 90-degree turn alone without cutting the inside 3 footer.

Especially because when they went inside, doing the table-on, table-on was way faster than the outside table over table. They favor the inside line and then, in the next rhythm section, the inside (right side) is also faster. Nothing really made sense in their reasoning in that section. It got a bit more even in the third motos. We saw guys using the first outside more but they cut across to the inside anyway in the second turn. I like the thought behind doing something in a 2 consecutive 90-degree turns section because they usually aren’t interesting but the delivery wasn’t good this time.

We again saw six different winners in six crowns, why are we seeing it be so difficult for guys to win multiple crowns in one night?

Everyone will tell you, starts. But I won’t. I will tell you it’s because the length of the races. The first race is half a regular main. The second is half a regular main plus 2 minutes. I didn’t look at the stats nor I want to but I’d be curious to see the points standings today if we take the positions of all the riders halfway thru the main events since the beginning of the season. I can think of a few races where Anderson wasn’t in the top 5 halfway into the main this season. Time is the bigger factor of change in the triple crown format. The better riders have time in a regular main to catch up, use their fitness and technique to pick up “lesser” guys in the second part of the races. They can’t in the first 2 races of a triple crown night, and if you look closer, the 3 third motos of the 3 triple crown races were actually the more “normal” in term of results and hierarchy on paper. It seems like it’s always the first 2 races that get unpredictable… 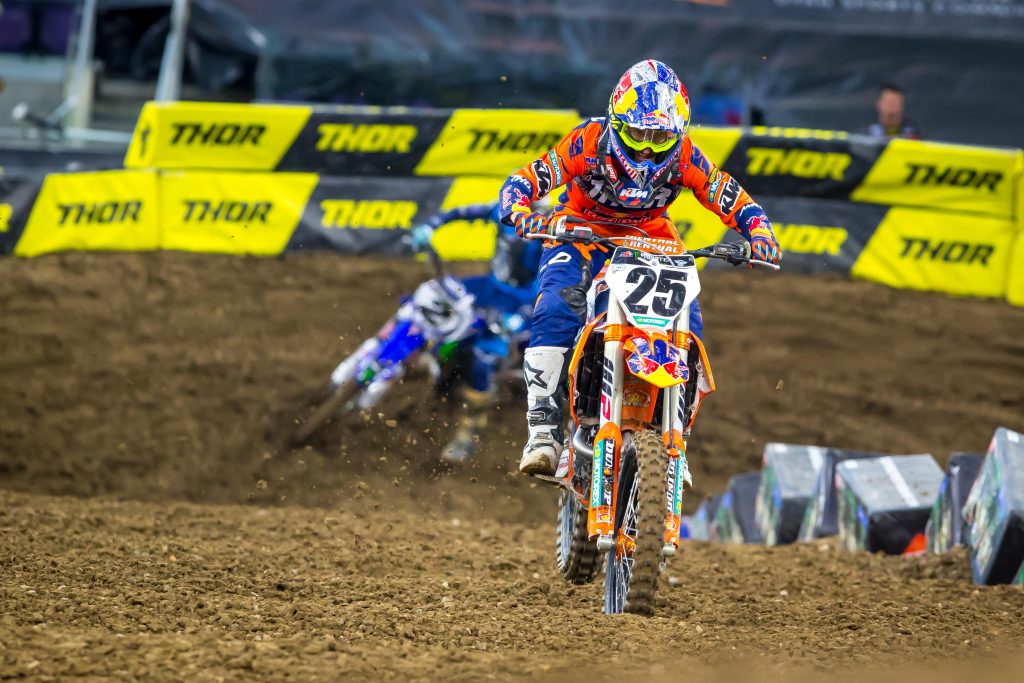 Marvin had the weirdest night where he went backwards in one crown, moved forward to win on and rode well in the other? What did you see?

Marvin, in the first moto, rode like an enduro rider and went thru the whoops like a grandma while the other guys went thru the whoops the right way and actually raced. Marvin isn’t allowed to get blown by in that type of whoops by Peick and Baggett like that. Thankfully, he flipped a switch between the first and the second moto and showed up to race. His 2nd and 3rd motos were very good I thought. He was aggressive, made some nice passes after the sand where he passed a few guys. He went for it, made quick passes and rode his dirt bike to win a SX race. It would’ve been difficult to ride worse than he did in the first moto so it had to go uphill from there. He’s not stupid, he knew he blew his first moto. He regrouped and woke up the good Marvin for the next 2 motos. There’s a lot of positive about his night in Minnesota. Like I said, his last 2 motos were very good. But we need to see him ride like that more often to win a championship in the future against Anderson, Tomac and Roczen. There’s no room and nothing beneficial to ride timid like that. We’ve seen him very timid this season while in traffic. He obviously knows how to ride not timid. He just has to show it more often and he will win more races and will have a better chance to win a title in the future…

Eli Tomac won with smart and fast rides, talk about him and anything else you saw in 450’s.

I’ve liked how Tomac has been riding lately. He’s showed some patience in his riding and has been riding with a bigger margin of safety. We saw in the last moto where he didn’t really try to catch Marvin and Anderson when he saw that he might not have enough to get them. That was smart. Not too long ago, he could’ve thrown it away pretty easily in that positon. It’s not a secret that Eli will need to ride with more patience, more maturity, more experience and more margin of safety to be able to be in the hunt for a SX championship in Vegas or just before.

As far as other riders Saturday, I liked what I saw from (Weston) Peick in the first 2 motos. He crashed twice in the last moto but before that he was mixing it up in the front with the “big 3”. I was expecting (Justin) Brayton to be more of a threat in the last moto after a great start. It didn’t seem like he wanted to mix it up. He went outside-outside in the split lane at one point which looked like he let Marvin and Tomac go by. It was good to see Barcia back and on the podium in the first moto. His 3-7-4 score was very good I thought for being absent since the first round of the East Coast season in Dallas. That was 2 months ago. And lastly, I still love the way Anderson still rides to win motos and races where 95% of the riders in his position would adopt a Dungey-like strategy to ride safe and score big points. It surely makes things way more interesting!

The 250’s were tight but Forkner imploded in the third main. Him and Osborne are style contradictions. What did you see from the 250 mains?

Forkner didn’t only implode in the last moto. It started way before that. He crashed 4 times in the second 250 race of the night. He crashed 5 times in 2 motos. The last crash didn’t look too good. I hope he didn’t break a collarbone or something. His first race was great. When everything clicks, Austin is super good and super fast but as we say in French, he seems to often “on the thread of the razor”… Which means, he’s on the edge of imploding way to often. I’ve said it after his win in Tampa where he beat “my” guy by a couple seconds. When I saw his ride the first 5 minutes in Tampa, I would’ve bet the house he couldn’t finish the main without a big mistake somewhere. I was wrong and he won the race. But, the style of riding is only good when everything goes right. If a little grain of sand goes into it, it’s over… It’s what we’ve been witnessing lately.

I think Osborne is riding better and better too. He looks way better than at the start of the season. He didn’t win Saturday but I like what he showed. A few technical things he did were cool. He jumps the whoops great. He used his legs a lot more than everyone else outside the turn which I believe in. He’s looking good to me when he didn’t in the first couple races of the season. Same thing for J-Mart, he’s improving. Is he actually becoming a SX rider now? LOL! I actually thought the track suited him good. Whoops not too big, no big rhythm sections and a track where his motocross speed helps him. When the track and the whoops are sketchier, he isn’t as good. On a more generic SX track, J-Mart will always be more of a threat… 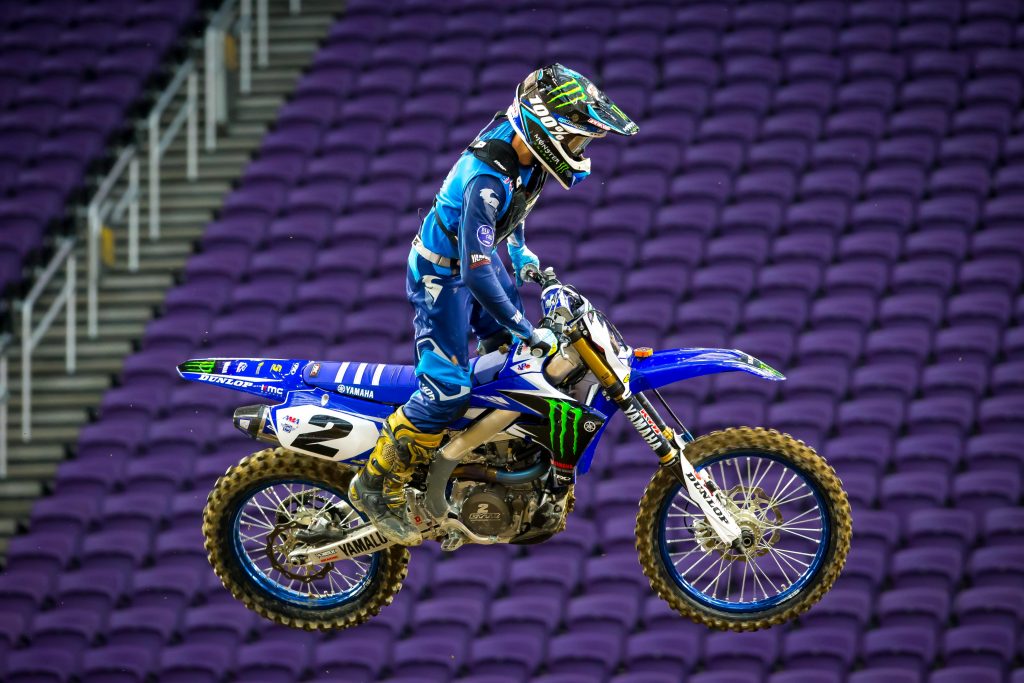 What about Cooper Webb now breaking his tibia—so far his 450 career has been a series of stops and starts. What are your thoughts?

It’s been a tough first two season in the premiere class for Cooper. As fas as the reasons why, it’s difficult for an outsider to know for sure. From what I see, he can’t muscle the bike and the other riders like he could and did in 250. He doesn’t control the 450 well enough just yet. It takes time to do so. I also don’t agree on his riding position, bars (height & length), very low levers, high elbows in turns a-la-Gary-Bailey, the balance of his bike (very high in the rear) but I’m not riding his bike, I’m just just watching. The “thing” Fro uses for everything on TV, the confidence, I don’t think that’s it either. At this point, I don’t think it’s one thing that isn’t working properly. I really believe it’s multiple things that don’t help him and it’s no secret for anyone that he’s been chasing his tail with bike set-up since two years. And now, he has to deal with an injury on top of that and we won’t see him for a while, maybe not even in the Nationals…