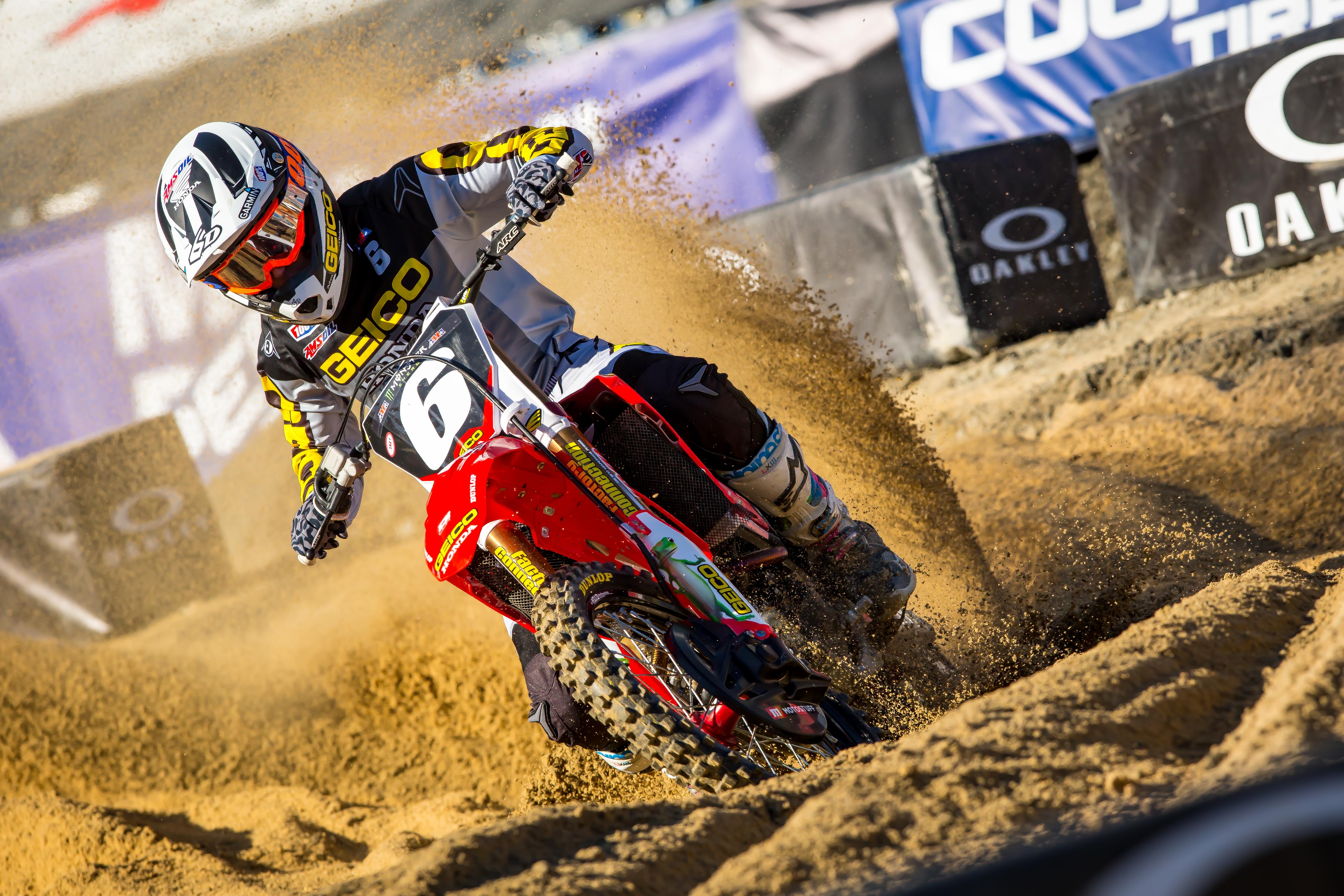 Well, we gotta start with “the pass”…thoughts on it?

David Vuillemin: First of all, I want to clear things out. Despite being born in the same country as Marvin, I’m hardly ever on “Team Marvin”. If you’ve been reading this column for a few years, you should know that by now. I’ve been very critical of him on here for years. In my opinion, and god knows everyone with an internet connection and a keyboard has one these days, I really think the pass was fine. Was it rough? Yeah, for sure, but we’ve seen similar passes like the one in Foxboro a thousand times. We’ve seen way worse too! Eli and Marvin were within 2 seconds of each other for 22 laps. They were obviously very close in speed on the biggest stage in dirt bike racing on the planet. Winning a Supercross race is huge. Some great riders never won a SX race in their career. It’s a very big deal to win one of those and when 2 riders are so close in speed, when it’s the last lap, when there’s a last opportunity to win the race, you gotta go for it. I’ve been critical of Marvin being too shy, too timid, too cautious, too calculated in the past and in a way, I actually like to see him show some aggressiveness. 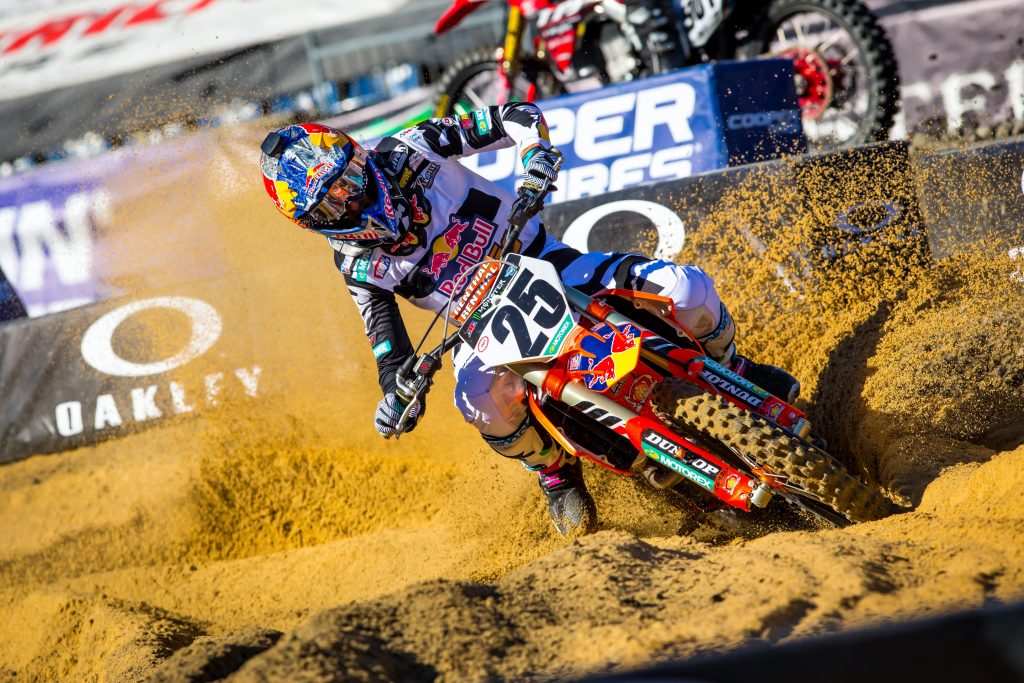 Should Marv get fined or something for a move like that?

If you fine or dock Marvin for this move, you’ll have to fine/dock every blockpass when a rider crash in the process. In Oakland for example because that race comes to my mind, you’ll have to fine Anderson for his move on Marvin, Barcia for his move on Tomac and actually Marvin for his move on Seely as well as so many more actions we’ve seen this year. Supercross is a contact and rough sport. We don’t like to see riders go down but it’s entirely part of the sport and frankly, Marvin move on Eli Saturday wasn’t even that bad. I actually thought in the 250 LCQ, when Basso (I think that’s who it was) went balls out in the inside of the whoops and had clearly no intention to turn to pass whoever was in the last transfer spot was and look way worse. But, we don’t make a big deal for that move. I doubt he would have made the turn if no rider was in front of him to stop him. That was a 500 bucks move to make it in a regional 250 main event. Marvin move was for a win in the biggest dirt bike racing championship, for over a $100k payday and for a 5th career win. Stakes are a bit bigger when it’s for a win than for a 250 main event spot…

People said that ‘Hey, Tomac did that also to Cooper Webb in the heat in Daytona for cross jumping” while Eli says that he doesn’t start anything but he has retaliated. Your thoughts?

I think Eli’s Daytona move on Cooper is a bad comparison. Webb moved over on Eli a few times, he cross jumped which is very dangerous so it was a plain retaliation move on Tomac’s part. Marvin’s move wasn’t retaliation because he got passed very clean the lap before. Eli’s move was understandable and I actually called it before it happened but it’s not really excusable at the same time. I’m not a big fan of retaliation move or paybacks. They’re often pretty stupid and the AMA has been the most consistent in fining and docking retaliations. I was surprised Eli played the victim so much though. He’s not known to have a nice and harmless style. He put people down in the past. We forget too quick how ridiculous his moves were on Dungey in Vegas last year. Any rider would be pissed in Eli’s shoes in Foxboro but it’s unfortunately part of the game and it happens all the time and sometimes way worse. I really don’t understand how people can get so butt hurt about that move. RC, RV, Reed, Stew, any of the SX riders Eli included and even me would’ve made the same move for a win if the opportunity came up. I don’t want to play the Nationality card on this one but I would’ve loved to see how people would react if the roles were reversed.

As for me, I’d be on Team Eli if it was the case like I was on Team Anderson when he took Marvin out in Oakland. Lastly on that subject, I really think fans are being ridiculous. As curiosity, I went on Eli and Marvin’s last Instagram posts to read the comments. I was speechless on the amount of hate, disrespect and insults I read on there. I know it’s 2018 and everyone with social media accounts have the right the express their feeling but they’re going way overboard. For god’s sake, chill out people!

Outside of the pass, what are you thoughts on the race for the top two guys? What did you see about either guys race?

The track was tricky. We could see they both couldn’t really charge it. At one point, I didn’t think Eli was going to be able to be close enough to pass Marvin. He was close the whole time but not enough to make a pass for more than 20 laps. It was a Musquin type of track. Sketchy with ruts, he’s very good at being consistent and mistake free in those conditions. Tomac was good but was losing time in some turns. He stood up several times in some corners and wasn’t as smooth. It’s why he never got very close for the majority of the race. The track was clearly challenging. The field was over 30 seconds back when the incident occurred. It tells us that those 2 guys, despite not looking like they were charging, were in fact riding well.

I thought Marvin could’ve rode a bit faster at times without taking more risk. He was really smooth and would’ve thought he could’ve gapped Eli by a few seconds to be out of reach. Eli hung in there, made some mistakes but stayed in reach. I call what the gap was doing between those 2 during the race, “doing the accordion”… Eli was close, then he wasn’t, then he was, back and forth. I thought both riders could’ve won easily by fixing their own mistakes but they really didn’t. Lappers played a part, Eli got close and I love how he set up the pass after the whoops. Not really sure if it was calculated but it worked great.

What else about the 450 class?

I like when tracks challenge the best riders in the class. We saw it with Marvin and Eli. It’s interesting for me to see what they do, how they adapt during a race with a changing track and what they change. I really liked how Eli grinded all moto to stay close to Marvin. I liked how Marvin changed his line and went super short before the long rhythm section. I also liked how he was smooth in his turns, not blasting fast but smooth, controlled and balanced. Behind them, Anderson finally figured out that he kinda has a championship to win and it would be pretty stupid to try to win on a track like than and eat crap. Took him a while to figuring it out but that’s the best strategy right. It’s better to clinch next weekend than in Vegas. As of the other guys, only 7 riders in the lead lap, 4th place almost 40 seconds back of the leader. That really doesn’t turn me on. I know the track was difficult but the rest of the guys (everyone except the top 3) really need to step it up. I know there were ruts and all but come on, they need to do better…

J Mart’s been great lately, any reason you can think of or see as to why he’s so much better?

I’m pretty sure I’ve stated that he’s automatically better on an easier SX track you can charge on and not be very technical. You couldn’t really charge by the time the mains came this weekend but the conditions were outdoor-ish. We know he can ride outdoor great, no doubt about that but I still think he lacks technique in SX for him to be consistent, mistake free and successful. He’s getting better but it has been a long process for a 2 time national champ. On paper, getting a 4th in Foxboro after his first lap crash is great. The crash itself was stupid and could’ve been avoided and should be avoided by a veteran like him. Just roll the jumps instead of jumping on the tuff blocks. He caught up to 4th and everyone thinks that was an insane ride. It was good yes but who did he pass?

The East Coast field right now is depleted. Put Forkner, Ferrandis, Davalos, Hampshire, Nichols or even Decotis back in the class, I don’t think he gets a top 5 after a first lap crash. Other than Osborne, J-Smith and J-Mart, the rest of the field is guys who are usually fighting for a top 10 spot when everyone is behind the gate. When I read this paragraph, I come off a bit tough and rough about J-Mart though. Don’t get me wrong, I really like the guy. He’s a nice, respectful, hard worker, gives his best and he’s a 2-time National Champ. I just think he has to improve quite a bit in SX if he wants to be a 250 SX Champ or a 450 contender in the future.

Pre-250MX thoughts- does Martin have anything for Zacho outdoors this season?

At this point, it’s tough to bet against Zach. He’s on the road to win 3 championships in a row and I actually think he’s also a better MX rider than he is a SX one. I also don’t think it’s going to be a walk in the park for Zach. J-Mart will be there and I’m questioning his consistency a bit. Osborne will be fast, strong and consistent and knows how to score big points when he can’t win. This last point might be his biggest advantage against Jeremy, Forkner, Adam and pretty much any other guys. I believe those guys have something for Zach at any race of the season but I have a hard time seeing anyone doing the job for 24 motos better than Osborne.

An Oral History of the Alex Ray/Tyler Bowers Incident