Shootouts are upon us and you may find that the 2019 KTM 450 SX-F you already purchased may or may not have done too well. Although the Keefer Inc./Pulp MX Shootout doesn’t start until September 18th, I wanted to give you guys some inside tips on making your orange machine a little better. Fifth place seems to be a common ranking (that I have seen) for the new KTM 450 SX-F in these shootouts and I can understand why at times. However, I will say over the past couple years I have been gravitating more towards the orange and white bikes and for good reason. They are light, corner great, are easy to ride, and so far have been fairly reliable. For 2019 though there are some things that KTM missed the mark on, but once those pieces to the puzzle are fixed and put together, this is easily one of my favorite bikes to ride. All of the new bikes are so close that all it takes is a few small changes to propel them up to a shootout wining machine. Below are a few things I did to my 2019 KTM 450 SX-F that can really change the character out on the track. Some of these mods are very inexpensive and some cost some coin, but each and every one of these mods make a notable change (for the better) to the KTM’s on track character. 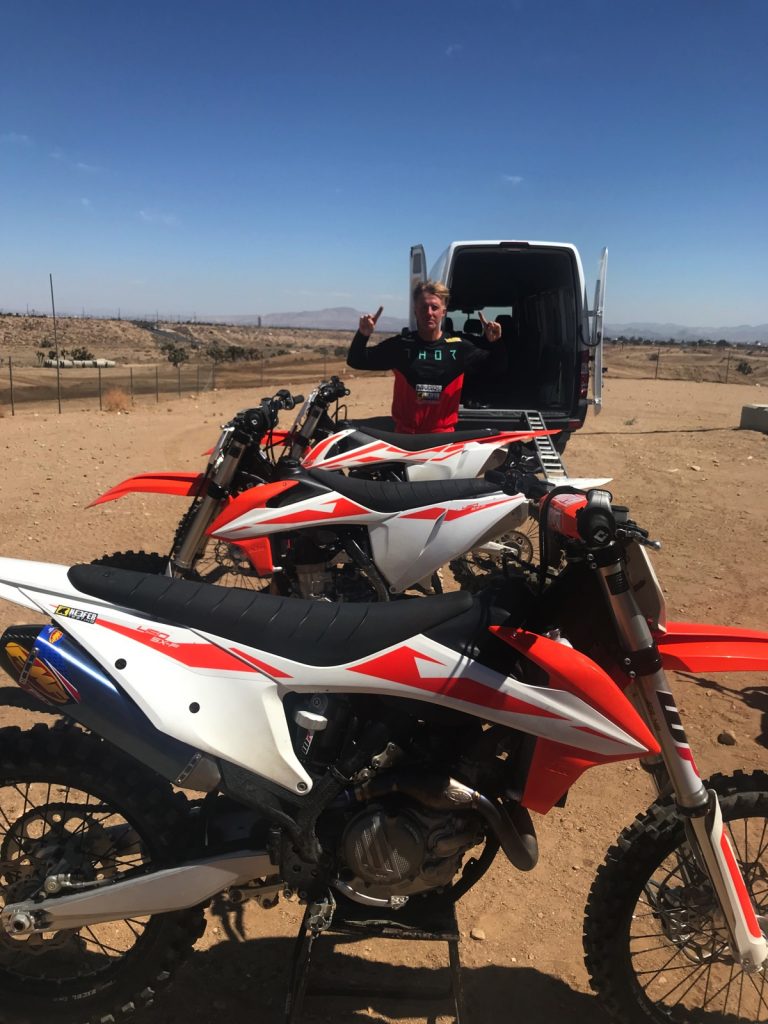 Stock Mapping/ECU: In stock trim the KTM’s ECU has a rich feeling down low (bottom end) and lean feel up on top end. The bike almost feels too lethargic coming out of corners because the mapping is too rich. When accelerating down a straight the 2019 450 SX-F can fall flat (compared to the 2018.5 Factory Edition) and has a lean pop that indicates to me that it is too lean. With this rich feel off the bottom it makes the KTM hard to get in and out of corners quickly because it feels so lazy (engine wise). It doesn’t give the rider a lot of “pop” or excitement, which also can make the orange machine feel heavy (especially in soft conditions). The easiest way to “wake up” your KTM’s engine is to get it re-mapped. I took my stock ECU to Jamie at Twisted Development and he installed a much cleaner and livelier Map 1 and 2. Once I put the re-mapped ECU in the KTM, it had a cleaner roll on feel, more excitement out of corners, yet kept its smoother pulling power nature that I liked so much. The updated ECU also gave the 450 SX-F a longer pulling power feel up top and didn’t go flat quite as soon. Just this mod alone can make this KTM jump from a fifth place machine to a first place machine.

Vortex Ignition: Modern fuel injected four-stroke technology relies heavily on ECU settings. I’ve spoke about this in my podcasts. Vortex and GET have made it easy to dial in your new bike’s power character with their aftermarket ECU’s. I have only tested the Vortex on the KTM, but it’s one of the best mods I have done to my KTM test bike. Twisted Development installed two maps inside the Vortex box (one map for race fuel and one map for pump fuel) and I simply plugged it in and was on my way. I have increased power throughout the power curve and the KTM 450 SX-F remained very connected to the track. The change that the Vortex made to the KTM’s engine made it very exciting to ride without being a handful to ride. The ignition also gives the KTM a more throatier sound with added bark. I lost count on how many people have commented on the sound of my 450 SX-F. If there was one thing I would do to this 2019 KTM 450 SX-F, this ECU would be my choice! 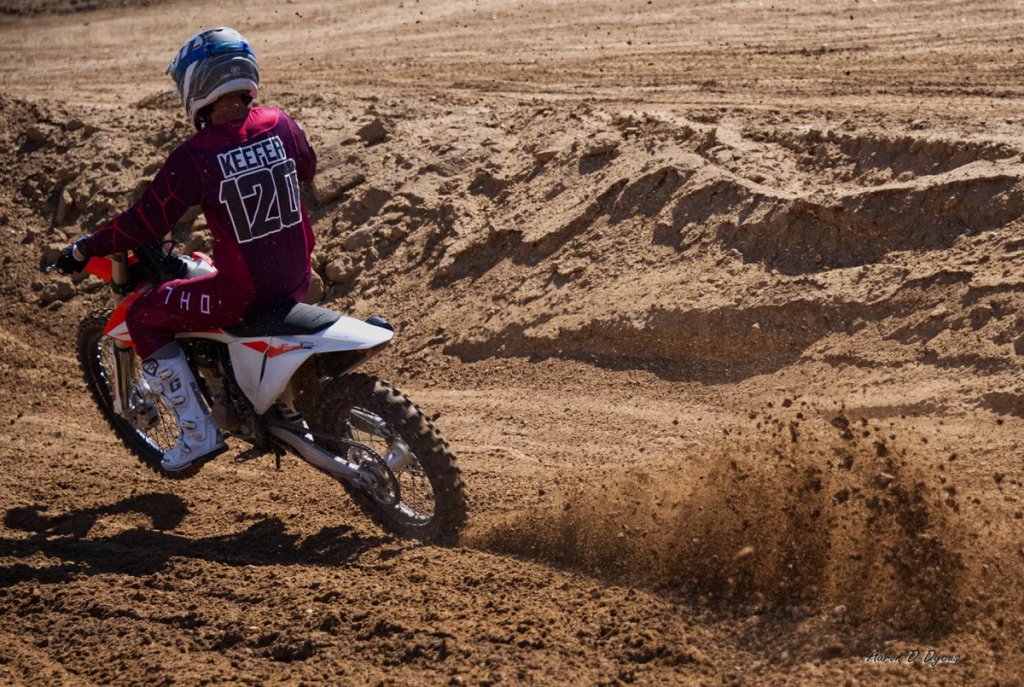 Black Throttle Cam: The stock “gray” throttle cam to me uses a long pull (twist to full throttle). I almost have to double chicken wing it to get there at times. In order to combat that and get some more bottom end feeling, install the black throttle cam that KTM offers you. Doing this will make the KTM 450 SX-F feel more exciting out of corners and hit slightly harder/sooner. It also gives you a more “Japanese” like pull instead of this delay in the power that the gray throttle cam gives you. There is nothing more frustrating than trying to roll through corners while having to twist the throttle almost half way to get the desired pull you want. Go to the black throttle cam!

Handlebars: If you insist on running the stock NEKEN handlebars then please cut them down 5mm (2.5mm on each side). Yes, you’ll feel it and the bike will be able to maneuver better on the track. Cornering improved for me when I cut the bars down and overall feel of the machine is much better with the narrower width.

Stock Suspension: If you’re sticking with the stock suspension here are some baseline settings to get you comfortable.

FMF Full System: If you want some added low RPM throttle response, better mid to top end pulling power then install a full FMF system on your orange bike ASAP. Not only will you be getting some added horsepower, but you will also be losing almost two extra pounds over the stock system, which will help when you go to spring forks (more on that later). FMF works closely with KTM in Austria to develop this muffler system and it keeps the clean feel of the FI setting. The FMF system is available at all KTM dealers.

Cone Valve Fork/Trax Shock: We are dealing with two totally different types of fork’s here, so the feel on the track is going to be completely different. The stock AER fork is the best air fork on the market, but still doesn’t have that predictability over the course of a full day of racing/riding. I will find a good setting with the AER fork and it changes slightly throughout the day. The first thing I noticed when I went out on the track with the Cone Valve fork was that the KTM turned slightly slower on initial lean. You can feel the extra weight in the front end, but it wasn’t a bad feeling, I was just surprised I could feel it when entering corners. I started out with a fork height of 3mm up in the fork, but went with a 5mm height setting after I felt the slower front end lean feel. Along with the extra weight feeling however I gained more front end traction through every corner (especially flat corners). The Cone Valve fork leaves you with a more front end tire contact patch sensation and you can lean over more in ruts without getting the high front end, vague feeling like I did with the AER fork. With the AER fork I get some pushing in the front end through the middle to end of the corner, which made me roll off the throttle to try and compensate. With the Cone Valve fork I can lean in the corner and the fork stayed planted, which let my front end settle and bite. The CV fork also felt less active on braking bumps. I am able to jump in and out of bigger bumps (think Marvin Musquin) without having the fork rebound too quick. If I wanted to pound through the bumps, the fork had better damping feeling through the middle to end part of the stroke. The most notable change was to my wrists when over jumping or flat landing with the Cone Valve fork. The AER fork holds up well, but I feel like it stops at the end of its stroke leaving me with a spike feeling that jolts up through my hands. With the Cone Valve fork, it’s a smoother action feel and I have less harshness at the end of the stroke than I do with the AER fork. You are getting more comfort with the spring CV fork than you are with the AER. The only downside I can see from going to the CV fork is the weight (which didn’t bother me after a few laps) and spending the money to switch over to spring. 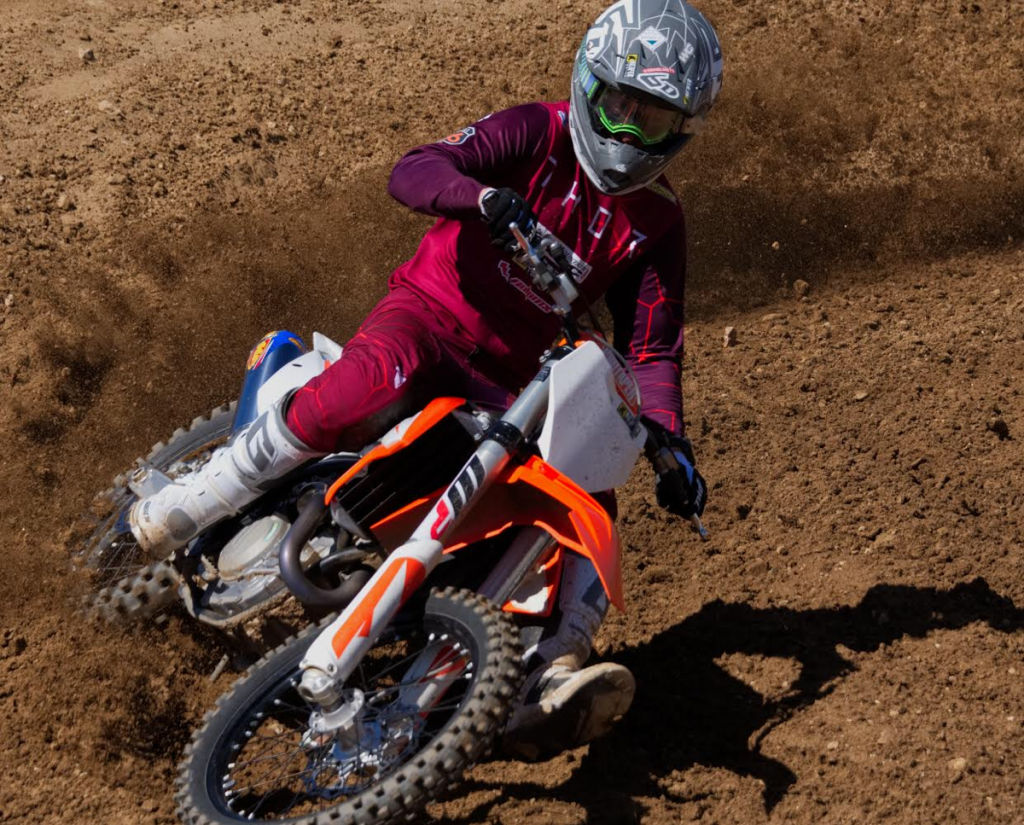 The Trax shock gave the rear of the machine a firmer feeling than the standard shock, but it wasn’t so firm that it beat you up around the track. You will lose a little comfort on small bump absorption, but gain performance on bigger bumps on the track. Where the stock shock will blow through at the end of the stroke (high speed compression) the Trax shock holds up better and you are able to get more aggressive around the track. I can hit the faces of jumps harder and the KTM will not give you an empty, low feeling sensation that the stock shock sometimes can give. In order to combat that feeling with the stock shock I would have to crank up the high speed compression so much that I lost the comfort coming out of corners. The Trax shock provides you with more high speed damping and you still get a decent amount of acceleration comfort. I also noticed a little more connectivity to the the rear wheel (when hard on the gas) on flat corners with the Trax shock. The Trax shock is firmer so there is less wallow in the rear end when accelerating, so the rear of the KTM tracks straighter. “Balanced” is a great word to describe both ends of the 2019 KTM 450 SX-F now (with the cone valve fork and Trax shock). I have the Trax system turned “off” for my setting as I felt like it had more of a dead feeling (which is a feeling that I like). A “dead feeling” is where the bike can be pushed hard into braking bumps or square edge chop and will not move or react as quickly. With the Trax “on” the rear wheel followed the ground slightly better out of choppy ruts/corners, but reacted too quickly when coming into large braking bumps when entering corners. I would think the Trax system would benefit an off-road rider that needs his rear end to move and follow the ground more at higher speeds. I ran the sag a little higher at 103mm (rather than the standard 105mm) and this seemed to be the happy spot where the KTM felt less rear end low. The Trax shock is very finicky to adjustments so make sure you only do very small 1 click increments as you will be able to feel each change you make.