For this edition of Classic Steel, we are going to take a look back at what the “Big Three” moto mags thought of the 250 class of 1992. 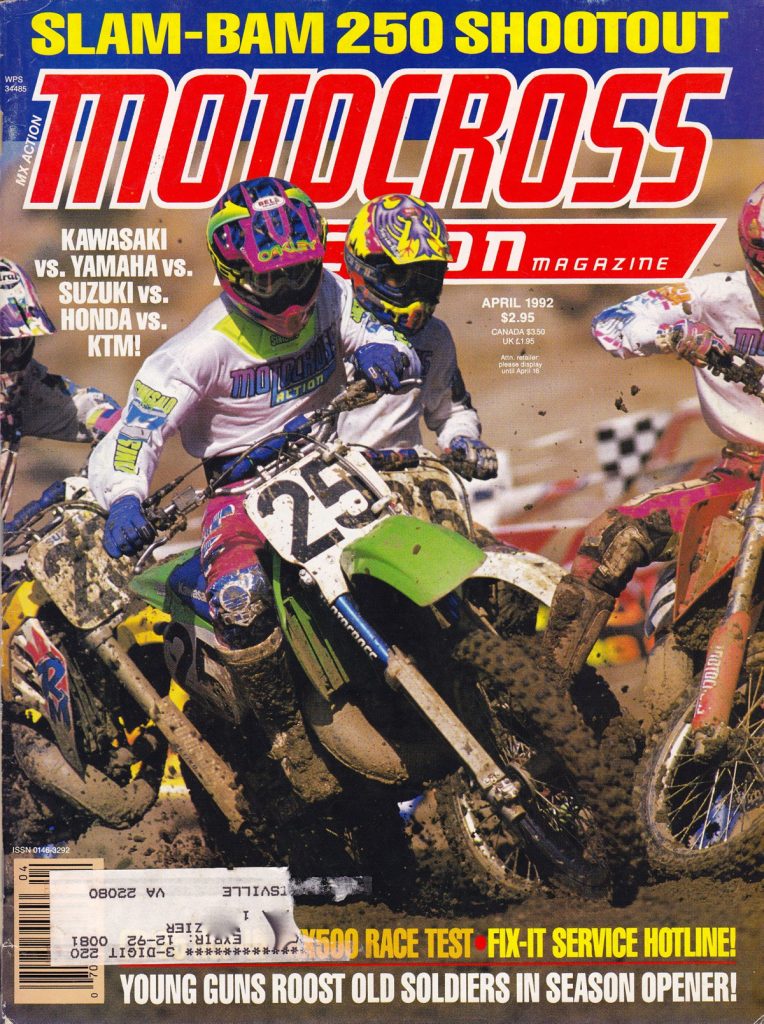 I miss MXA covers like this. Now every cover shot is a static studio shot of some random motorcycle.

The early nineties were a great time for motocross in general, and the 250 class in particular. Bike sales were still strong and the four-stroke revolution was only a twinkle in Yoshiharu Nakayama’s eye. Bikes were colorful, tracks were plentiful and a rebuild only cost $120.00. Best of all, if you could scrape together a cool $4000, you could have a brand-spanking-new 250 in your driveway. 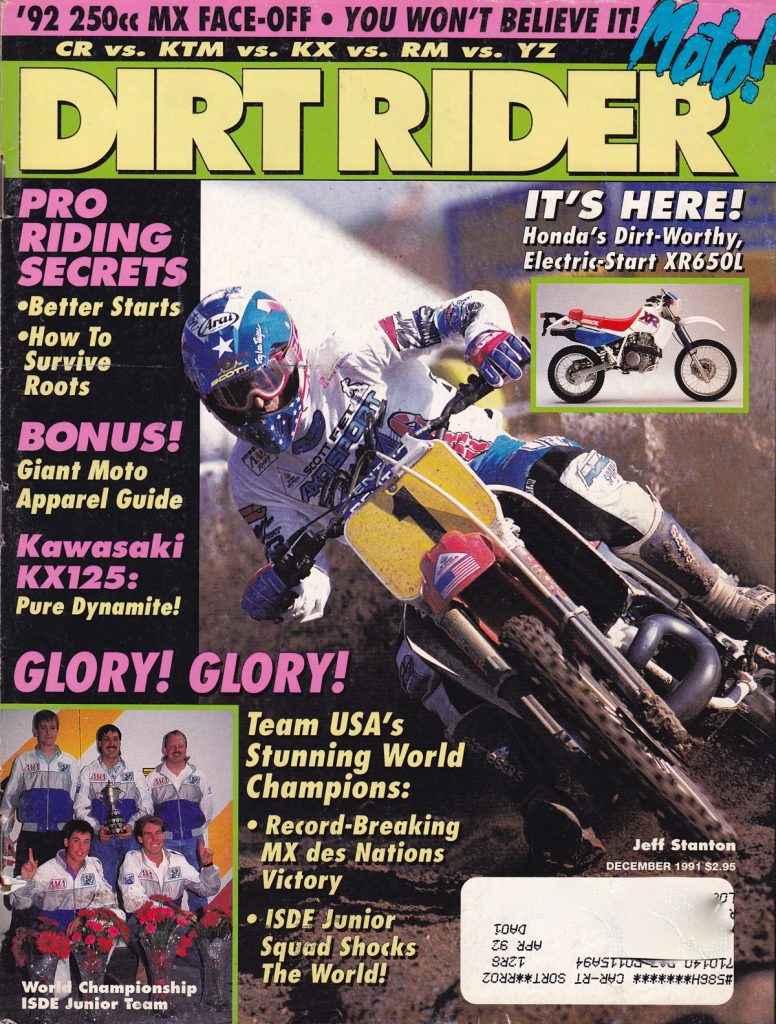 After the demise of Super Motocross, Dirt Rider folded that coverage into the “Moto” section for a few years. This is definitely my favorite era for Dirt Rider and as a side note, I really miss winning the Motocross des Nations… #Merica

In 1992, there were basically five major players in the 250 class looking to pry away that hard-earned $4000. Of the four entries from Japan, two were all-new for ’92. Both the Honda and Kawasaki entries were completely redesigned, with the Yamaha and Suzuki entrants offering only minor changes over 1991. On the European side, we had the KTM 250 as the sole entry from the Old World of motocross. At the time, Husqvarna’s WMX250 was still available, but no longer imported to the US in significant numbers and rarely seen in any of the major motocross magazines. Because of its omission from any of the 1992 shootouts, we are going to stick to the Big Five and only cover the CR, KX, RM, YZ, and SX. 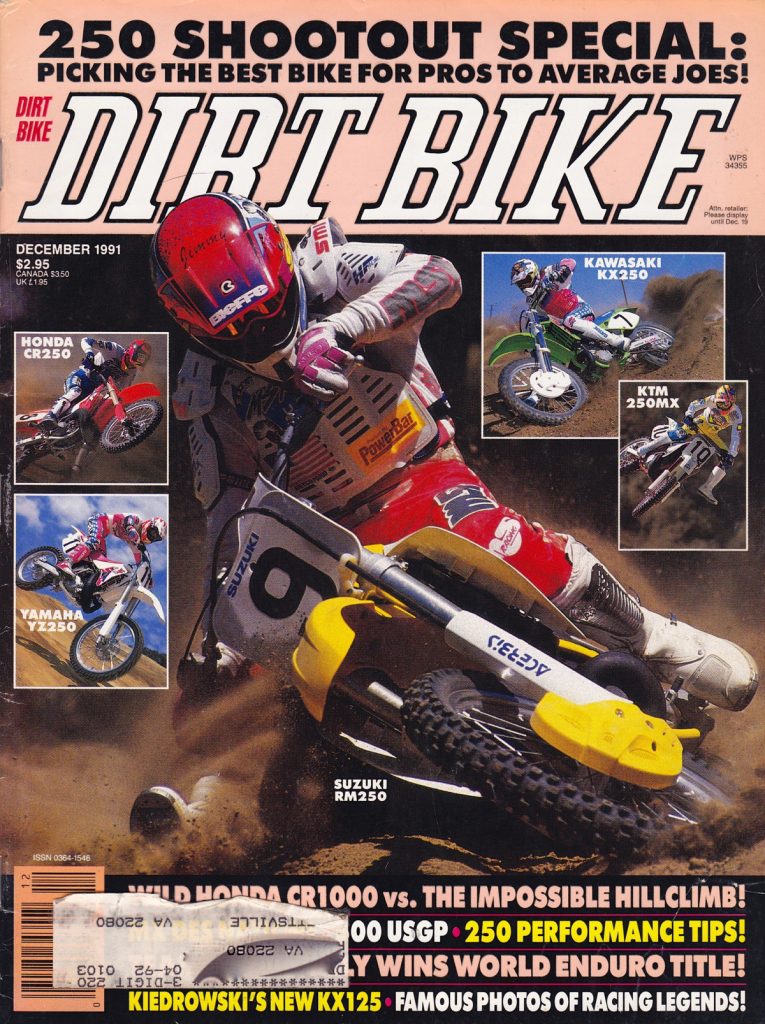 In general, I really like this cover with the shootout front and center, but no magazine should ever have a Bieffe helmet featured on the cover for any reason.

Here is what Motocross Action, Dirt Bike, and Dirt Rider thought of the 250 class of 1992. 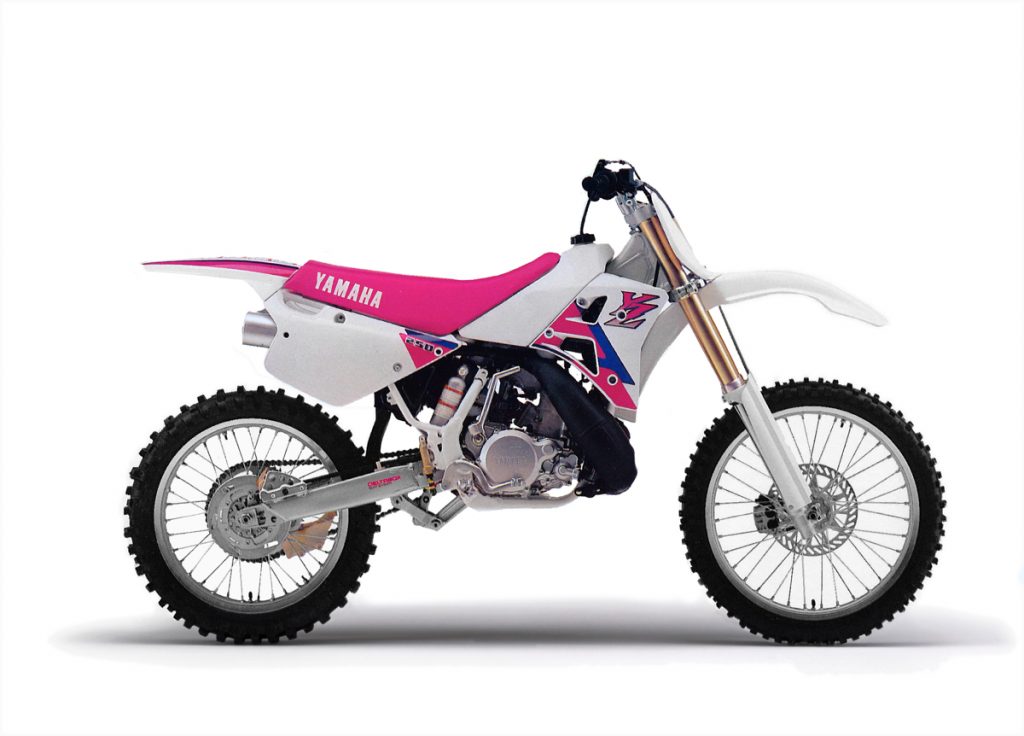 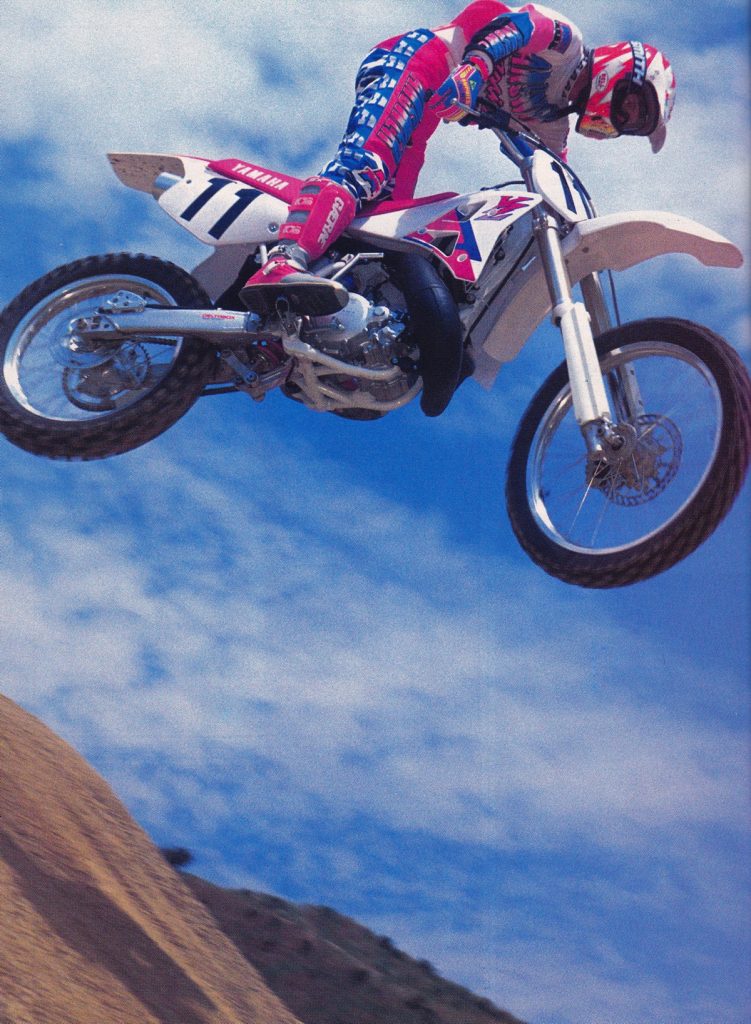 Jack Of All Trades: Easily the most well-rounded package in the 250 class, the YZ250 finished either first or second in every major shootout in 1992. Photo Credit: Dirt Bike

1992 Yamaha YZ250 Overview: In spite of (or perhaps, because of) being the oldest platform in the class, the Yamaha YZ250 turned out to be one of the best 250s money could buy in 1992. It was not the fastest (Honda), best suspended (Kawasaki), nimblest (Suzuki) or mintiest (KTM), but it did offer the best overall package. The motor was smooth and torquey, with a delivery that could find traction on greased gorilla snot. The suspension was not as plush as the Kawasaki, but it was worlds better than any of the others. The YZ’s handling manners favored stability above turning, but it was still far better at changing direction than the CR and RM were at going straight. Basically, it was a bike that didn’t blow anybody away in any one category, but also avoided the major missteps that torpedoed the others. For MXA, that overall competence was good enough for the win, but for Dirt Bike and Dirt Rider, the allure of a shiny object overshadowed the YZ’s less-flashy persona. 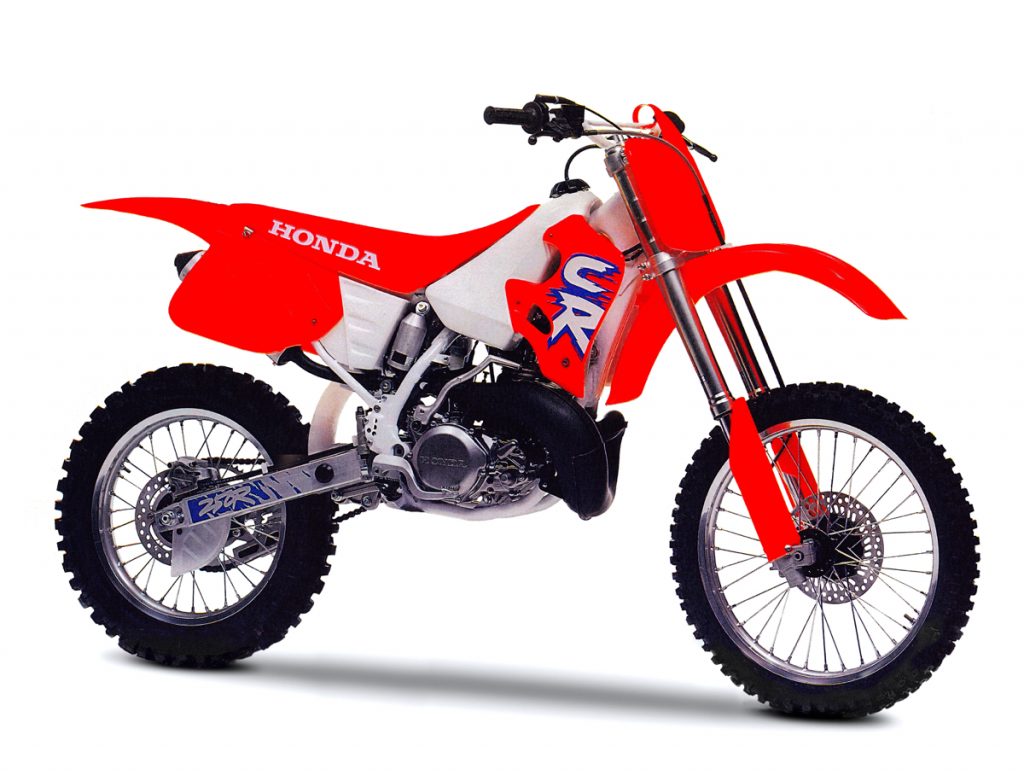 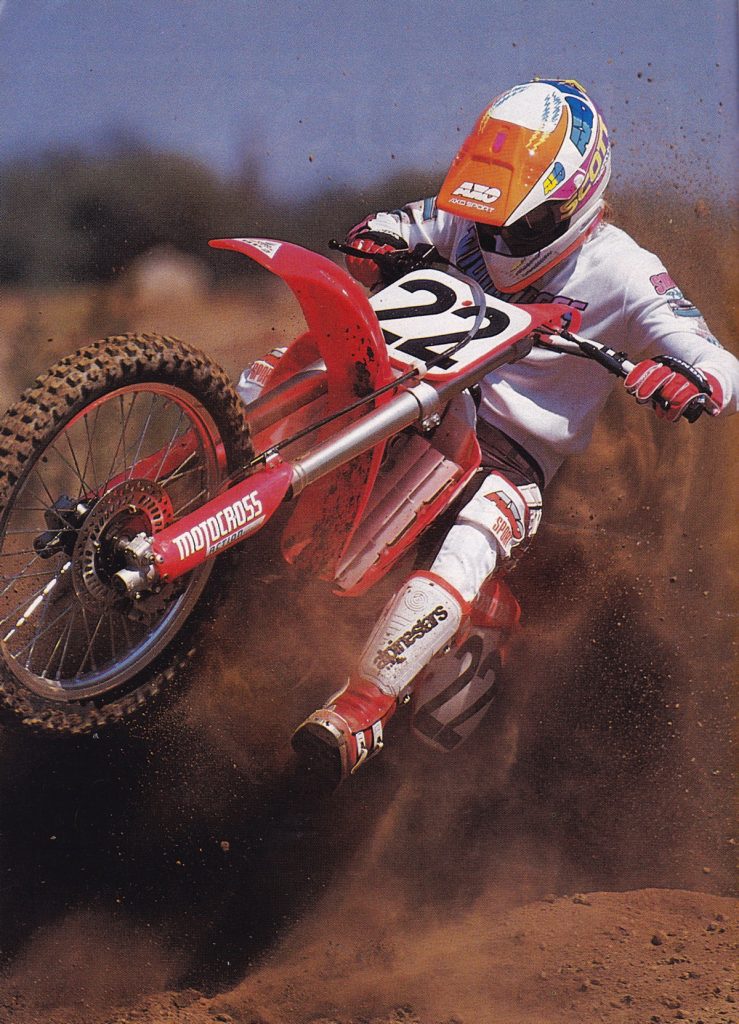 Radioactive Ripper: By far the most potent bike in the class, Honda’s new Nuclear Red CR250R backed up its bold looks with major firepower in 1992. Photo Credit: Motocross Action

1992 Honda CR250R Overview: All new for 1992, the CR250R did away with Honda’s highly successful (but complicated) HPP motor in favor of a lighter, simpler and more compact mill. This new CRV (Composite Racing Valve) motor featured half the moving parts of the HPP design and offered a completely different style of power. Whereas the ’91 CR had offered a smooth and electric flow of ponies, the new version produced a hard hit and blistering top-end pull. It was by far the fastest motor in the class and a handful for those of lesser skill to manage.

On the handling end of the equation, the CR offered a razor-sharp package that could turn rings under the ’91 CR and virtually every other bike in the class. With is compact ergonomics, tight wheelbase, and quick geometry, the CR was a joy when the track got twisty. High-speed stability was non-existent, but on supercross-style circuits, it had no peer.

Truly, the only real problem with the ’92 CR package was its suspension.  Both the forks and shock were harsh and unforgiving. They worked pretty well when charging, but beat you to death once you backed off even a little. For Dirt Bike, that was not enough to knock it out of the top spot, but for MXA and Dirt Rider, the CR’s harsh feel and tiring nature made it a hard sell when compared to some of the easier-to-ride alternatives. 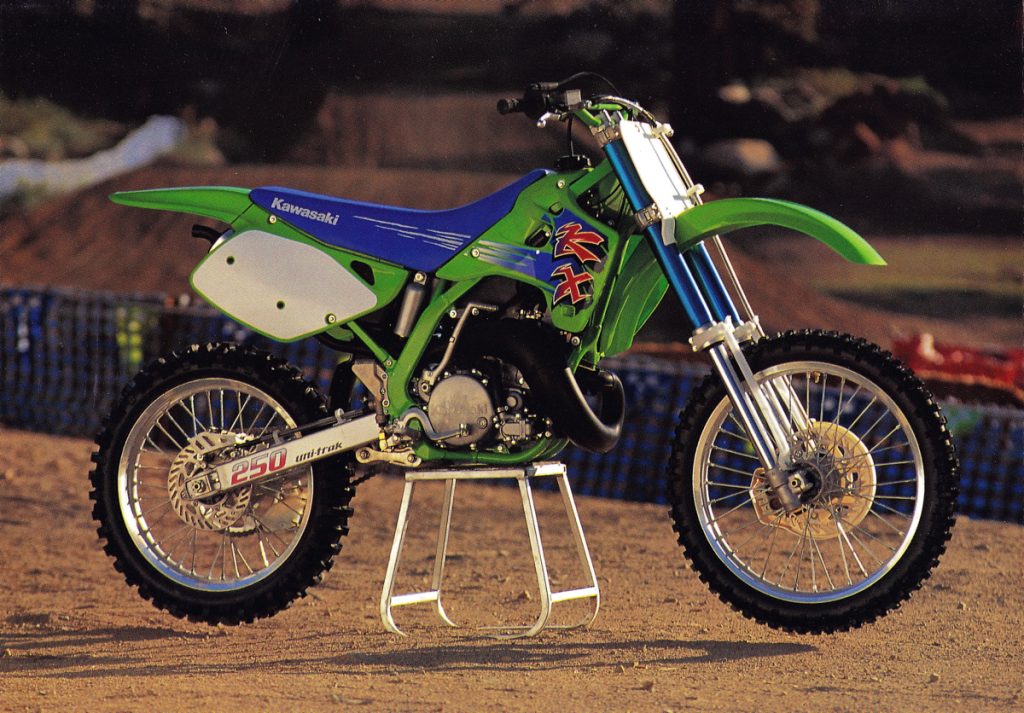 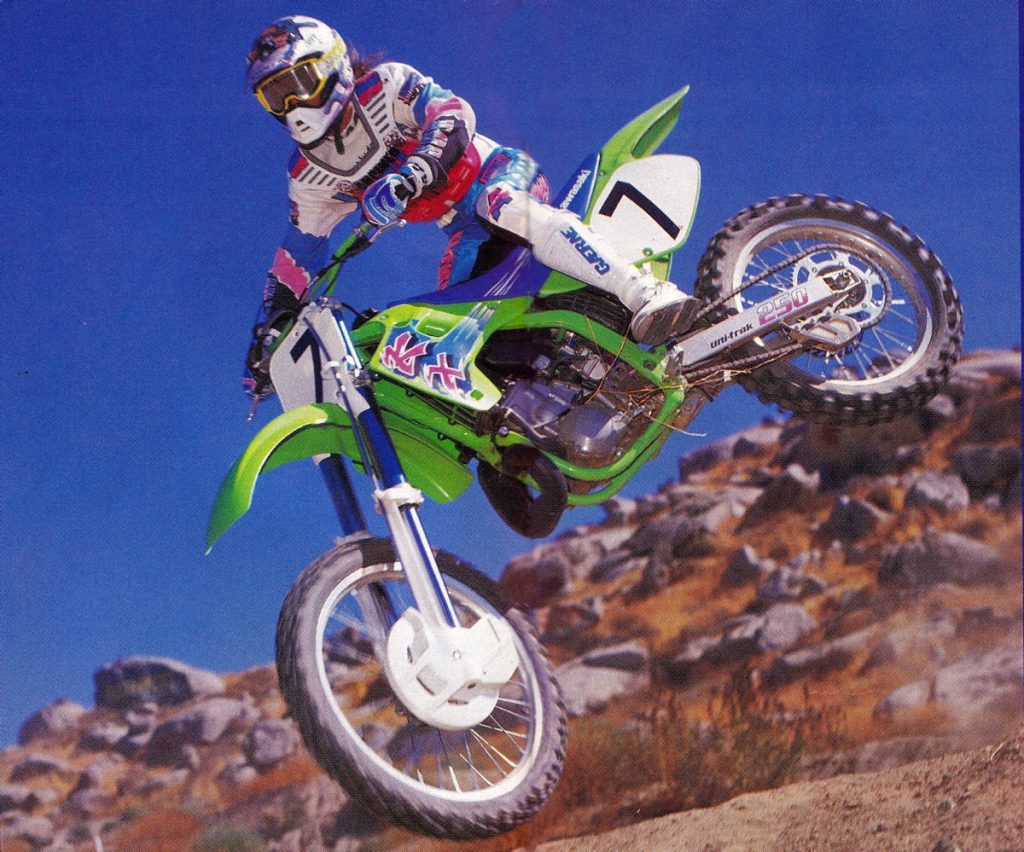 1992 Kawasaki KX250 Overview: In 1992, nothing on the track was as plush and comfy as Kawasaki’s KX250. Its Kayaba forks and shock were in a class by themselves and head-and-shoulders better than anything else available. After that, however, it became a harder sell. The new chassis was still tall, long and wide. That made the bike a good fit for those over six feet tall, but also made it feel heavier and less wieldy than the other bikes. Stability was rock-solid, but the KX’s turning manners more resembled a school bus than a Corvette. The motor was also smooth to the point of being boring and the brakes were mushy and perpetually in need of bleeding.

In the end, it came down to one thing: just how much do you value suspension? For Dirt Rider, that plush action was enough to overlook the mellow motor and Paul Bunyan proportions. For MXA and Dirt Bike, that suspension was appreciated, but not enough to outweigh its peccadillos. 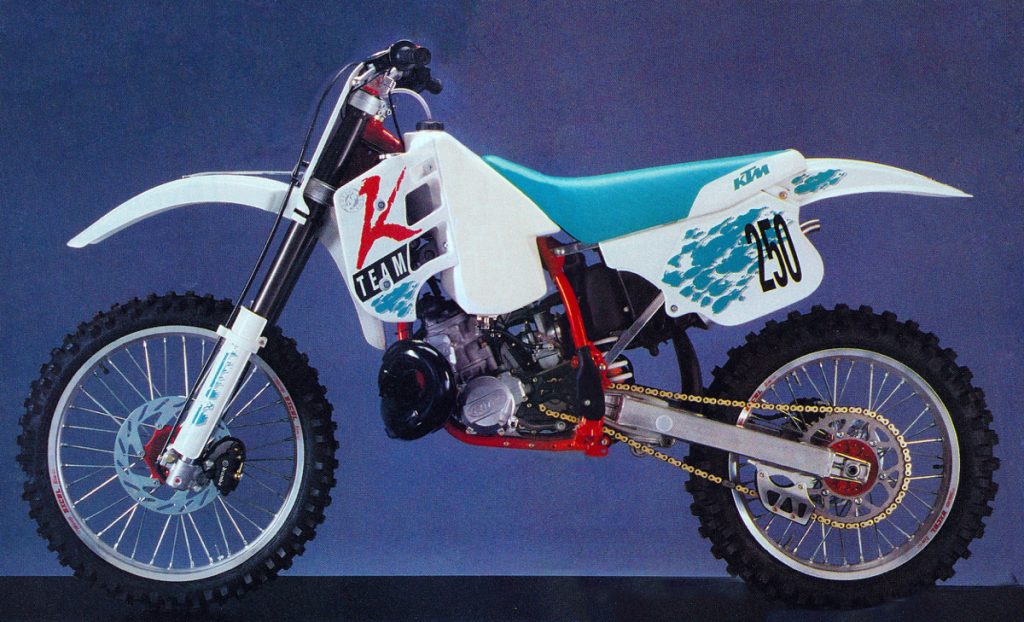 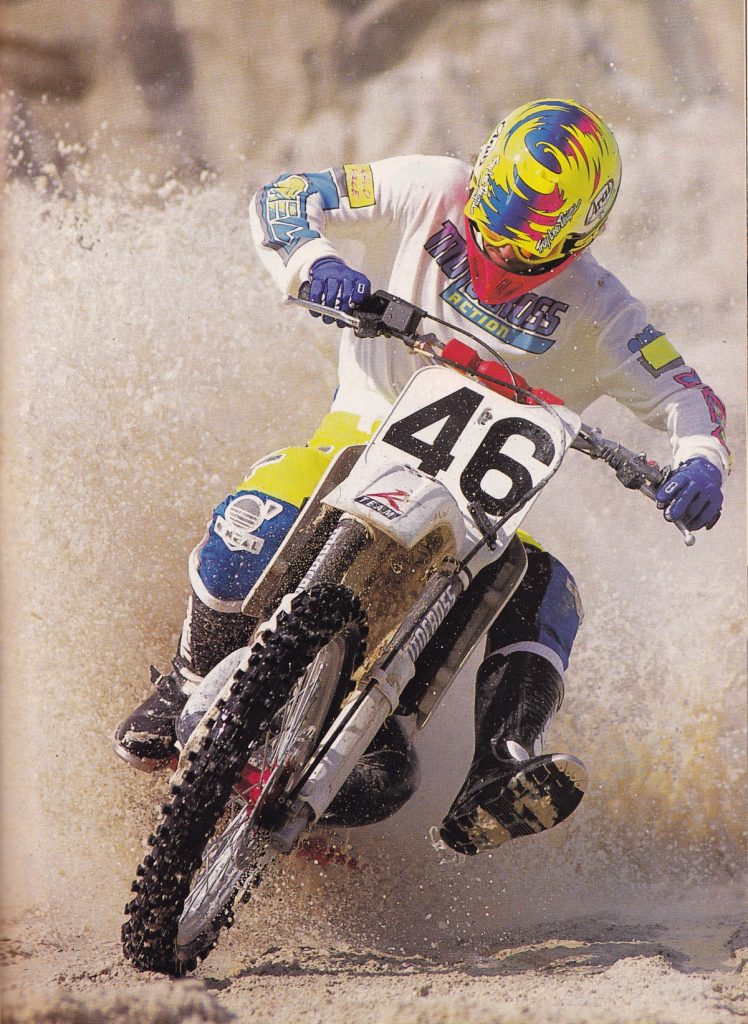 1992 KTM 250SX Overview: In 1990, KTM completely redesigned their 250 in an effort to bring the Austrian brand more into the mainstream. The new machine ditched the left-hand kickstarter and most of the odd quirks that put off many American buyers. While this new breed of KTM was far more Japanese-like than its predecessors, it did still offer a unique feel that many riders found peculiar.

For 1992, KTM raised the bars, widened the pegs and reshaped the seat all in an effort to make the bike feel less “different.” New porting, a redesigned power valve, and a beefed-up piston also looked to inject some oomph into the 1991’s tractor-like powerband. Lastly, new 4057 White Power forks from Mike Fisher’s factory bike and a new SuperAdjuster White Power shock hoped to address the ’91 KTM’s most glaring weakness.

In most ways, this revamp for 1992 proved very effective. Much to the surprise of many riders, the ’92 KTM motor was rated only behind the blazing-fast CR in terms of effectiveness. Low-to-mid power was the best in the field and the KTM only lacked the CR’s shrieking top-end pull. Suspension action was also much improved, with the KTM finishing right behind the awesome KX in the fork ratings.

Where things went astray, however, was in the handling and overall “feel” departments. In spite of efforts to excise its old-world flavor, the KTM continued to handle a bit “off” compared to the others. In the turns, there was a push to the front end and an unplanted feel that riders found disconcerting. The bike was also ten pounds heavier than the next-heaviest machine and a whopping seventeen pounds portlier than the feather-weight CR. On the track and in the air, that extra girth was noticeable.

With its strong motor, much-improved suspension and less-weird ergonomics, the ’92 KTM 250SX proved the most competitive KTM ever offered up to that point. That said, however, it was still not rated above any of the Japanese bikes other than the incredibly hard-to-ride RM. 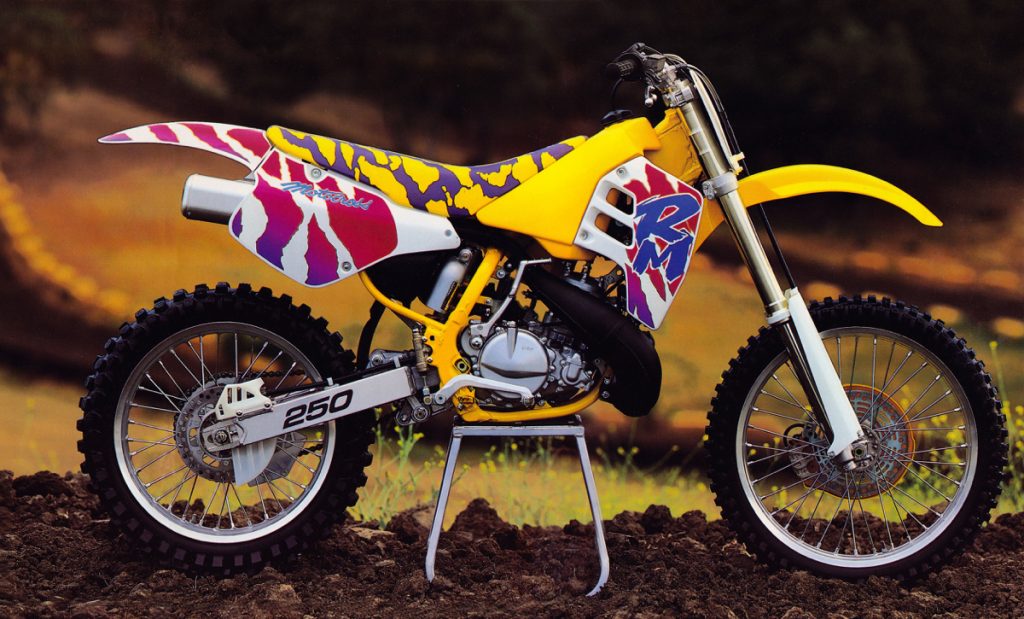 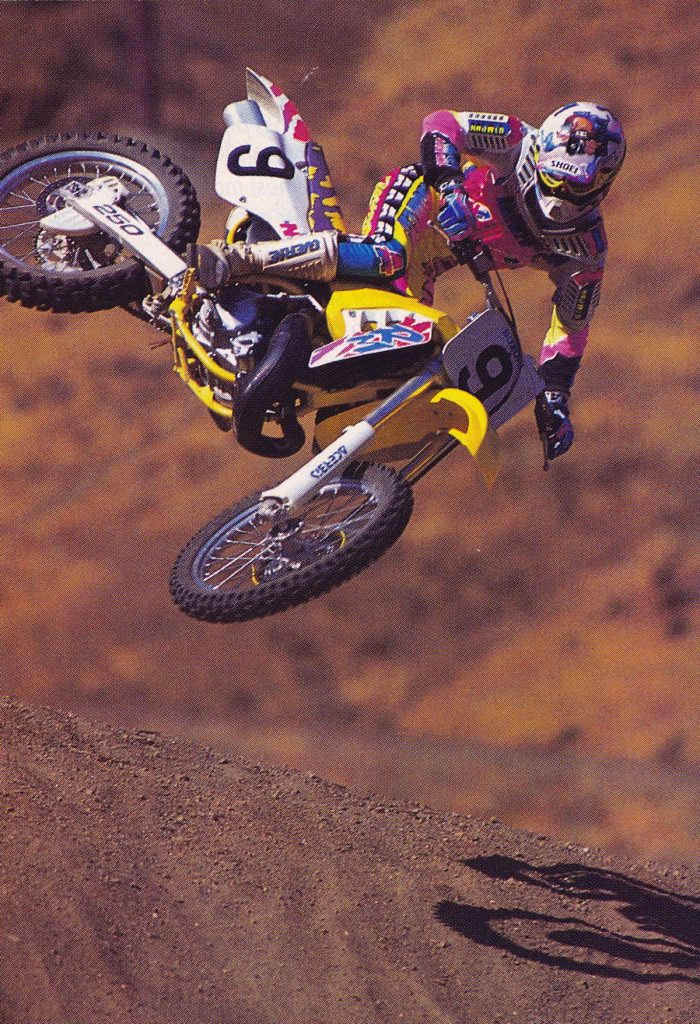 High Flyer: For anything short of Supercross, the 1992 Suzuki RM250 was a handful. Photo Credit: Dirt Bike

1992 Suzuki RM250 Overview: In 1992, nothing on the track was as bold looking as Suzuki’s RM250. Even Honda’s neon pink CR could not hold a candle to the absurd excesses of Suzuki’s styling department. Bright, colorful, and outlandish, the RM250 was cutting-edge in styling, but purely pedestrian in performance.

On the track, its case-reed motor put out a hard-hitting and narrow blast of power that made the bike exciting, but tricky to manage.  There was very little power above or below this midrange explosion and keeping it the sweet spot was far harder than any other 250. Handling was typical Suzuki for the time, with super-sharp turning and a disturbingly unplanted feel at speed. Like the motor, this made the RM fun on Supercross-style circuits but frustrating outdoors.

Of all the RM’s shortcomings in 1992, however, by far the most glaring was its terrible suspension. Both the forks and shock were rated the worst of all the 250s. Harsh and jarring, neither end was good for anything other than going for Guy Cooper-style mega leaps. Busy, frantic, and demanding, the RM250 brought up the caboose of the 250 division in 1992.