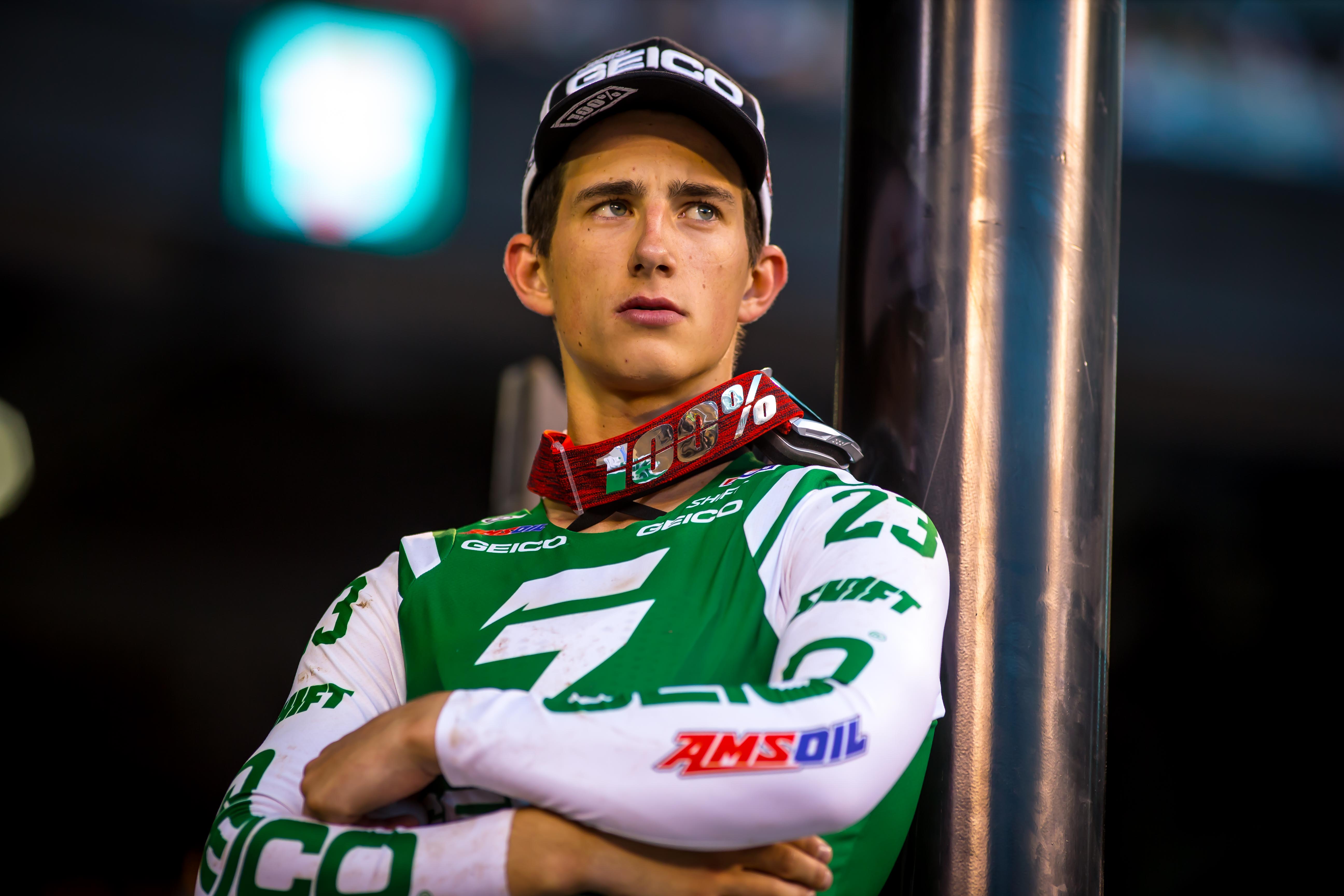 Heading into East Rutherford we had plenty of unanswered questions, now, with the Jersey-round in our rearview mirrors, the optics are almost completely focused.

The fact that Austin Forkner was scheduled to line up had any hardcore Moto fan rooting for the kid. A torn ACL is nothing to be taken lightly and the fact that this was the second year straight that injury looked to be robbing this kids destiny from him; you just knew he was not going out without a fight. To be completely honest, I was shocked at how aggressive Austin approached the night as a whole. He restrained himself a bit during qualifying and did what he needed to assure himself a sportsman’s shot at a good start in his heat race. And he accomplished just that, a damn-near holeshot in his heat race and he straight battled through the duration. Granted he, was afforded a few gifts by some late-heat crashes but a 4th meant Austin was looking good to survive an incident-free main event.

“Incident-free” was a pipe dream in the world of Austin Forkner in East Rutherford though. Austin’s approach to the main event in “Joizy” had me just as confused initially as watching Eli Tomac’s “bunching” strategy in Vegas two years ago in real time. We had never seen this “bunching” strategy used in Supercross before so it was pretty exciting as we watched it evolve and in Austin Forkner’s case, watching a very inhibited racer on the full-out attack in the opening laps of the race, I was like “WHAT?!” I get the desire to dial-in a great start and try to stick with the leaders at the beginning and try to keep from fading too far off the pace but less than a lap into the Main and Forkner was clearly trying to take down Chase Sexton, his most obvious title-threat! Chase, shockingly, kept his cool during these initial moments of contact and just settled in behind Austin, almost as if he knew exactly what was going to transpire.

Moments later Austin’s aggression and ill-advised youthful exuberance caught up to him with one momentary lapse in self-awareness. He ran it in a little too hard on the take off after the finish line corner and cased into the leading face of the next jump which clearly popped his knee back out. It was instantly obvious that no amount of piss, vinegar, Torredal or pain suppressant was going to overcome the body’s innate-sense that something was woefully wrong. That type of pain is like an out of body experience, un-ignorable and that made continuing on, despite the massive sense of regret, was simply unconscionable.

Austin’s second SX season, ends the same way his first did. It’s really microcosm of education for how and why the veteran’s in the sport, who become perennial champions, are the elite of the elite. Staying healthy and being in it to the end may not be as glamorous as setting every pole or winning every round but those stats are footnotes when compared to titles secured.

This brings me to the most impressive thing I saw in East Rutherford and it’s not the first time I’ve noticed it. The maturity level of Chase Sexton.

Last year in Supercross I was admittedly pretty surprised with how underwhelming Chase looked in the Supercross series. Based on his training crew, tales of how gnarly he was physically and the tools at his disposal, I expected to see Chase reeling off wins last year. Imagine my surprise when this year, as impressive as Chase has been, we’d be left waiting until the second-to-last round of the series before he’d secure his first win alone! Chase’s form is second to none (well maybe Christian Craig) and his race craft unshakeable as well. Austin Forkner may have more raw speed but at the end of 2019, you know what Chase will have and Austin won’t and those are the things that make for long careers with increasing returns.

Two weeks ago when the door of opportunity originally swung open for Chase, a far less mature race choice by Justin Cooper left Chase on the ground and would have left MOST of us on a rampage for blood. Chase remounted, refocused and minimized the damage. As Austin was bouncing off him and showing his teeth, Chase sat back and allowed Austin to eat his own tail. Which he did.

Chase’s level of maturity at his young age has again proven to bear fruit. I’m 42 and I can with 100% certainty tell you the first time Austin bounced off me, would have been the symbolic “gloves off” and I’d be switching to the offensive just waiting for an opening and SEND IT! This kid’s got perspective that is unusual at his age and it’s going to equate to a career many will emulate in the future. Kind of like a recently retired legend who came from unassuming roots and also wasn’t always the fastest guy on the track.