Today, 100% is one of the most popular goggle brands on the motocross circuit. They can be seen every weekend protecting the vision of top riders like Cooper Webb, Marvin Musquin, and Justin Cooper – and are just as popular with the weekend warriors that are the backbone of the sport. Stylish, innovative, and imbued with the cachet of winning, 100% is one of the major motocross success stories of the last decade. 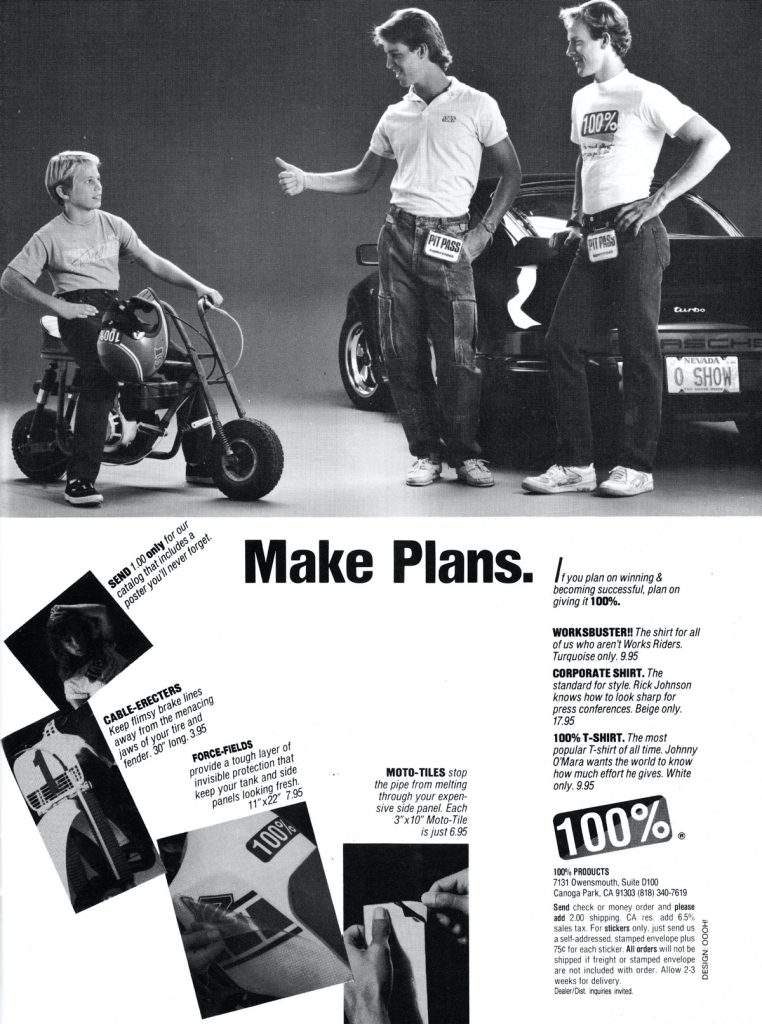 The original 100% was known for innovative products like the “Moto-Tile” and “Force -Fields” that kept your bike looking good and performing at its best.

For those of us born before 2000, however, that 100% logo takes on a whole different meaning. Long before its 2011 rebirth at the hands of Ludo Boinnard and Marc Blanchard, 100% was one of motocross’ most iconic brands. Originally launched in 1982, 100% Products was the brainchild of Jim “Hollywood” Holley’s mechanic Drew Lien. At the time, everyone was still using drum brakes and one of their drawbacks was the propensity of the brake cable to become entangled with other parts of the bike when it flexed under braking. In order to alleviate this, Drew came up with a hard-plastic sleeve that he could fit over the top of Holley’s front brake cable to reduce this flex and protect the cable from the front tire. Once people saw this on Jim’s bike, other riders were quick to hit up Drew for cable covers of their own. Seeing that there might actually be a business here, Drew set out to design what would be his first official product – the “Cable-Erecter.” 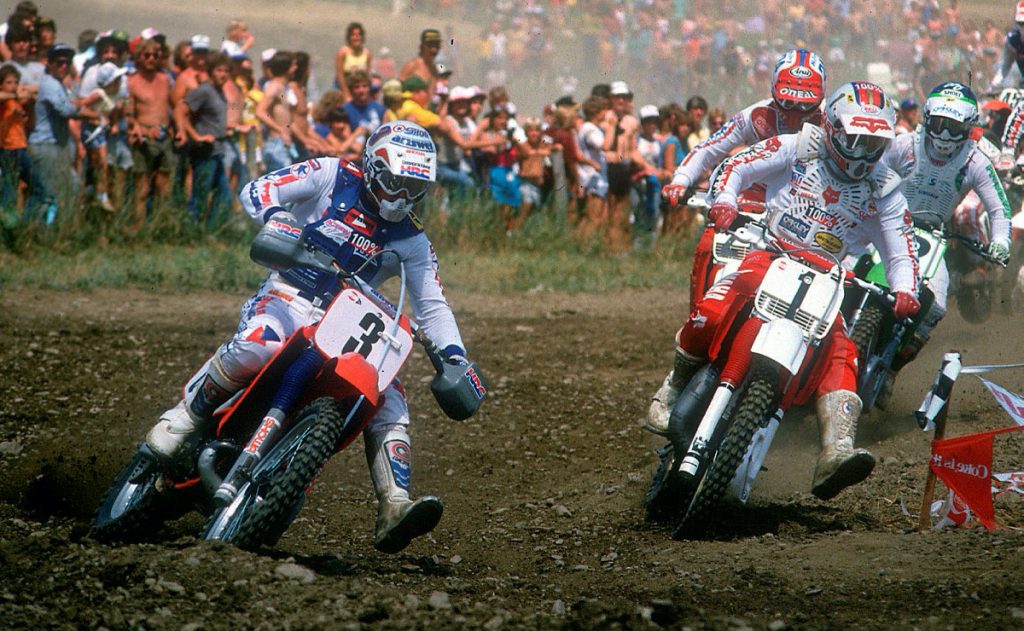 The iconic 100% sticker could be found on the jerseys of all the biggest stars in the mid-eighties. Drew Lien’s friendships with the sport’s heavy hitters gave his fledgling brand instant pit cachet. Photo Credit: Paul Buckley

Once he had a product, he knew he needed a name and looked to one of the greatest riders of his generation for inspiration. In 1981, Bob Hannah was coming back from a near career-ending leg injury and was awarded the number 100 after missing the entire 1980 season. Drew saw a picture of Bob and made a connection that would lead to one of the most memorable logos and pitch lines of the eighties “100% – How much effort do you give?”

For 100% Products, the real breakthrough came when Drew reached out to his friend Ricky Johnson. At the time, Ricky was an-up-and-coming Yamaha support rider and coming off a Rookie of The Year award in the 125 class. When Drew approached him about running some of his new 100% stickers on his bike for ‘82, Johnson was more than happy to accommodate. With Ricky on board, fellow SoCal motocross star Johnny O’Mara was quick to follow and within a year, Drew’s iconic red and blue logo was adorning half of the bikes in the pits. 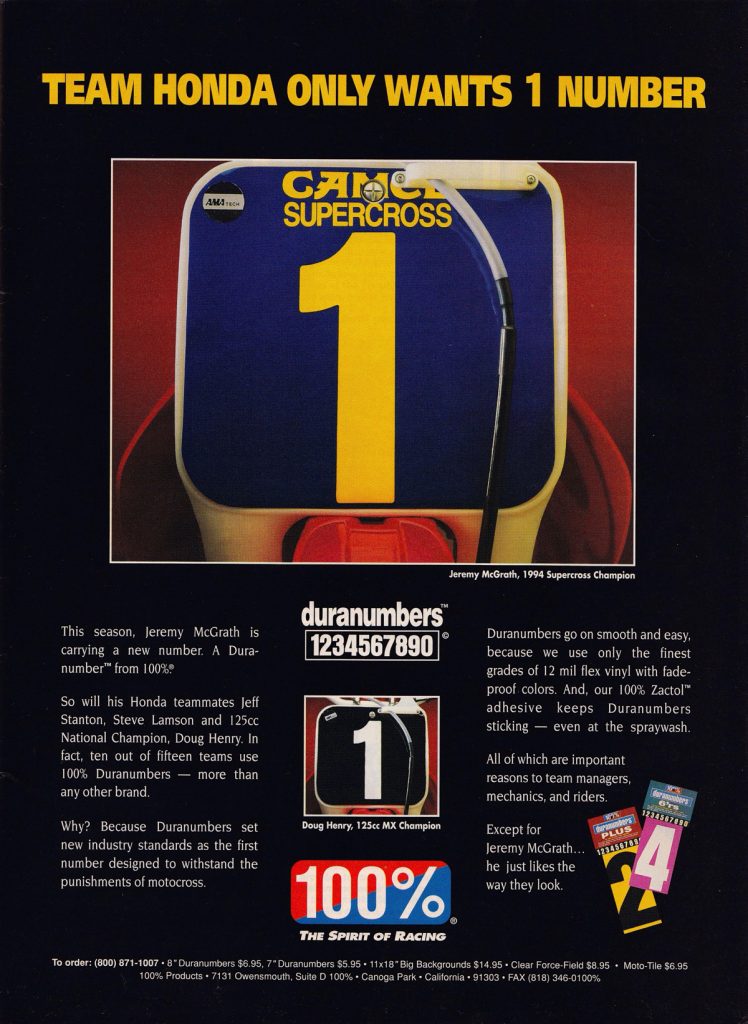 One of Drew Lien’s most long-lasting contributions to the moto industry was the introduction of premium motocross numbers in the late eighties. His new “Duranumbers” were thicker, tougher, and (in my opinion at least) better-looking than anything else offered up to that point.

After the success of the Cable-Erector, Lien’s next significant product was a piece of aluminum insulation he called “Moto-Tile.” These small adhesive-backed tiles were designed to be placed inside side panels and on the underside of the tank to prevent the expansion chamber from melting the plastic and roasting your leg. In the days before “lowboy” exhausts and sensible pipe routing this was a major problem (I still have the scars on my right calf to prove it) and you can see the results of Lien’s innovations in the form of the very similar heat shields found on the OEM machines today. 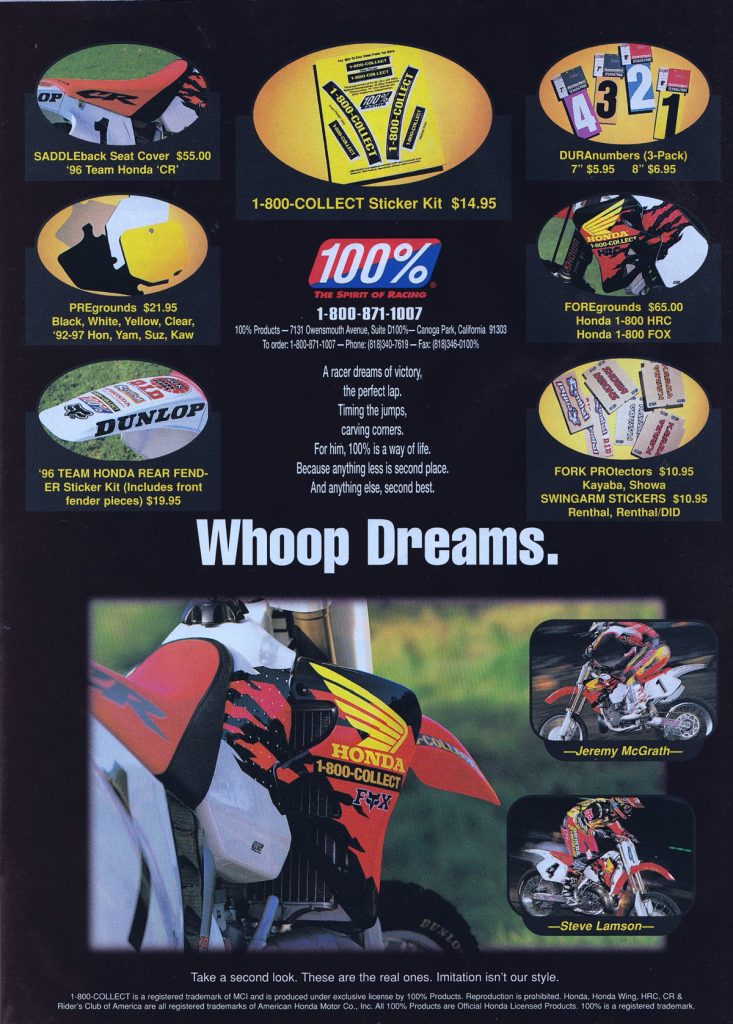 By 1985, 100% had established itself as one of the coolest brands in the pits with riders like Johnson, O’Mara, and David Bailey sporting the logo on the cover of magazines like Motocross Action. In addition to the Cable-Erector and Moto-Tile, Drew had added a clear vinyl shield for the gas tank called “Force-Fields” and a selection of T-shirts bearing the 100% logo.

Playing off the success of the Force-Fields, Drew expanded into thick and durable number plate backgrounds that were an instant hit, and eventually, numbers. At the time, most numbers were flimsy offerings that tore easily and ejected off the bike willingly at the first sign of a pressure washer. By combining his eye for style with his thick vinyl backgrounds, Drew introduced the world to the most durable numbers the sport had ever seen. Dubbed “Duranumbers,” these new numbers were an absolute revelation at the time of their introduction in the late eighties. They looked great, went on easy, and were impervious to pressure washers, boots and errant tires. Found on the bikes of many factory riders, Duranumbers proved a huge success and helped kick off an aftermarket graphic revolution in the late eighties.

By the mid-nineties, Drew was becoming daunted by scale of his operation and decided a partnership might be his best option to compete with the many graphics competitors that had flooded the market. At this point he approached Fox Racing about becoming the exclusive distributor of 100% Products. Prior to this, Drew had been selling his products through several outlets, with him handing both the design and logistics of the operation. With this new partnership, Drew would be freed to focus on design, while Fox handled the inventory purchasing, warehousing, and distribution. 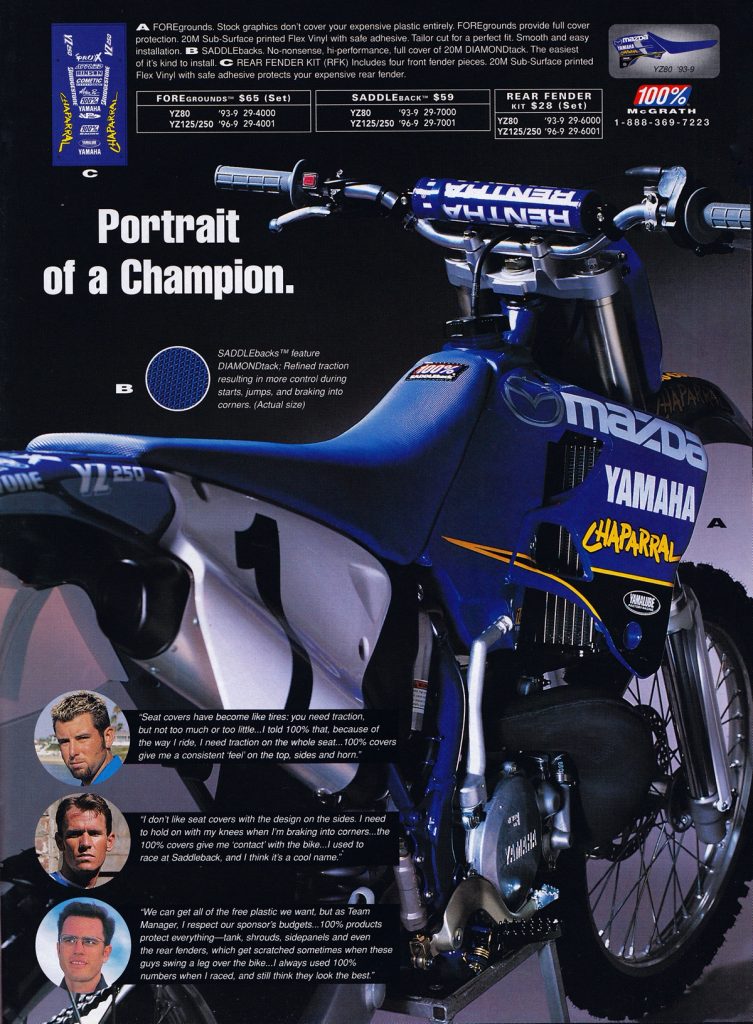 In 1999, Jeremy McGrath was back on 100% with his new Mazda Chaparral team. This would be the last major team to use 100% for their graphics.

During this period, 100% Products found its way onto some of fastest bikes on the track. With Fox’s backing, 100% decked out Jeremy McGrath’s CR on his way to the 1996 AMA Supercross title and provided the numbers for Doug Henry’s paradigm-shifting four-stroke victory at Las Vegas in 1997. Even though 100% continued to be successful, the ever-increasing pressure of the graphics industry began to take its toll on Drew. What was once a fun project that was ran out of his garage grew into a cutthroat business that sapped his enjoyment for the endeavor.

Eventually, Drew decided to pull the plug on 100% Products and entrusted the future of the brand to his friend Jim Hale. Hale, an icon in his own right, was the man behind AXO Sport America and one of the most influential names in motocross during the eighties and nineties. At the time the CEO of Mechanix Wear, Hale left the brand dormant for several years, before selling its rights to Ludo Boinnard and Marc Blanchard in 2011. 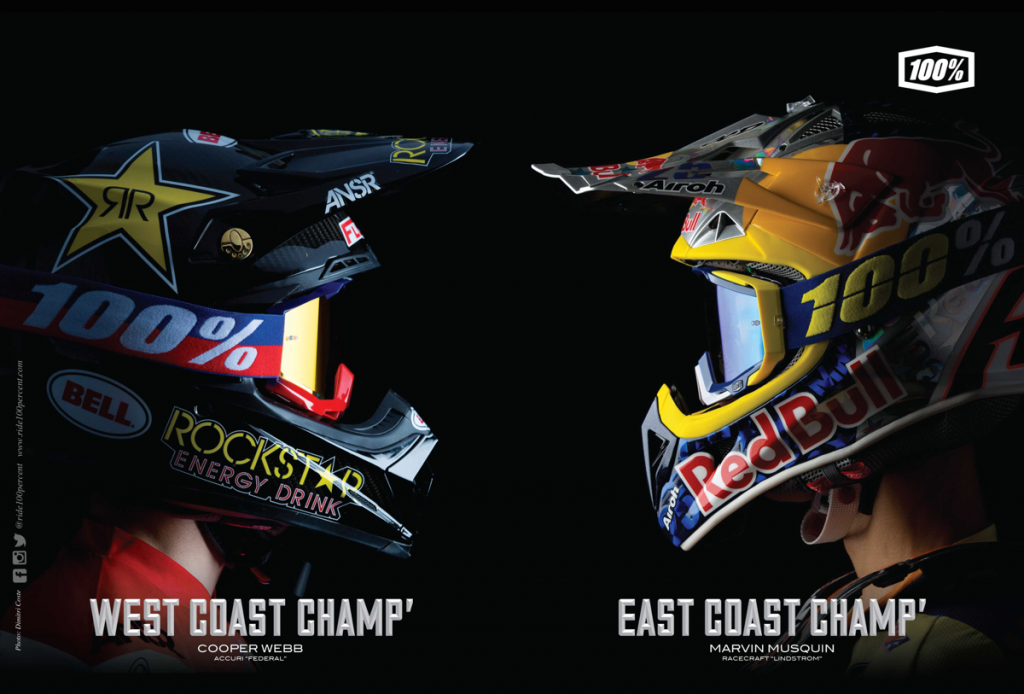 Today’s 100% is no longer a graphic company, but they continue to support the top riders in the sport in their efforts to be the best.

Sadly, Drew did not live to see his brand reborn in its current iteration. After fighting depression for several years, Drew took his own life in 2004. Even though he is no longer with us, his legacy lives on in the brand that made him such a beloved figure in the moto industry. 100% – how much effort do you give?