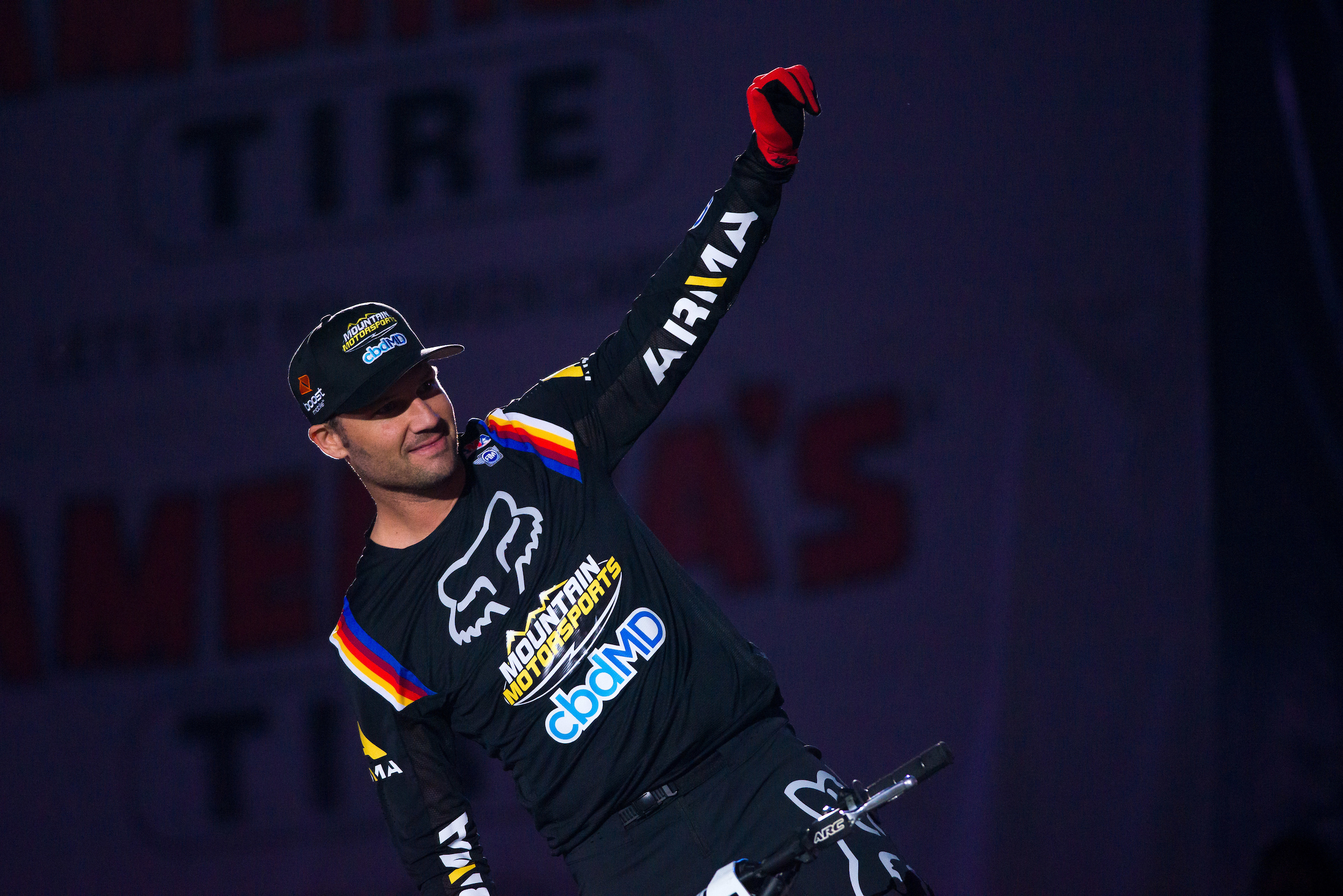 PulpMX: You told me before the interview, “You interview 18th place riders?” I told you, “When you’re Chad Reed, I do.” Last Anaheim. Kind of special.

Chad: Yeah, it was special. Different things, different emotions through the year. I feel like up until this point, I really haven’t deal with that. I’ve been really, really struggling. I don’t even know how to put it into words, to be honest with you. It feels different. Off the bike, I’ve had the best time. I feel like I’ve signed more autographs than ever. I’ve said hi to more people. I’ve taken more pictures. I’ve probably maybe over-extended myself in that area. Whenever I jump on a motorcycle I’ve just felt horrible. My mind hasn’t been in the place. This week it felt a little better. I felt like I at least did the jumps, went through the whoops fast a couple times. But I got to stop doing every lap of the night show. My fitness is not up to par. I can’t be doing that. I need to save a little bit for the main event.

I see you clipping stuff more than I’ve seen you clip stuff ever. Just the small stuff. I’ve watched you your whole career. I’m like, he doesn’t look smooth.

No, and I don’t feel smooth. For sure, I’m not in the greatest shape that I’ve ever been in. It’s been a rough off-season. Like you said, when you clip every jump and hit every hole and do every lap, it doesn’t make it any easier. Tonight I was in position I think to transfer pretty easily. Lost the front and crashed. Then lost a transfer spot on the last lap to Hill. So honestly, I think I just need to keep my emotions in tact and then I think as the year goes on, that gets better.

It is hard. It is. At the end of the day, I truly care. I love it. It’s been my life. I always knew it was going to be difficult, but it’s way harder than I ever imagined, to be honest with you. Sometimes you have to be honest with yourself, and for me it’s acknowledging that it’s not easy and that this week I didn’t ride. I didn’t train. I tried to put myself in a better emotional state. I felt like that helped me this week. We had a lot of rain in NC this week, so it wasn’t like I was really missing anything. But I didn’t do gym, didn’t do anything. I just worked on myself. My wife had surgery on Monday, so then I was babysitting her too. I think for the most part, what I needed to do I felt like I got a hold of that.

Last week you were like, I don’t even want to talk, to me.

I didn’t. I feel good about saying I’ve never quit. Never, ever quit. Last week straight up, I didn’t feel good on the racetrack. I felt dangerous. I felt like I wasn’t safe out there. I couldn’t wait to ride off of the track. I just didn’t want to be out there. As painful as that is to say, it’s the truth. I feel like you’ve got to be truthful. One thing I want to overcome, I just want to overcome that and go out and race and have fun. I still think that I can… I was on the podium last year. Can I podium this year? Who knows. I think that I’m a hell of a lot better than an 18th place guy, but I need to find myself again out on the track. Taking a few beatings over the off-season doesn’t help. All in all, this week was a better week.

Maybe just try to somehow take some time for yourself to get mentally ready. Maybe you’re not doing that. Just know that your reflexes and your muscle memory will come back, I guess?

Yeah. It has. Leading some laps in the Last Chance Qualifier. It’s never ideal to go to those things, but I guess the positive is I got on the podium and I got to say thank you. I take that as a win.

Favorite Anaheim moments. I could see you telling me the very first one when you came here and you whooped everybody’s ass, but I think that you might want to tell me the last one on the Kawi, which came out of nowhere. They’re both awesome. So, favorite Anaheim memory?

Yeah, I would say that your first win obviously is always special, but you were on the team that time. It came so easy. When you picture your first win in American and in Anaheim stadium, you picture it riding away out front and just literally one of the easiest races of your life. So I would say that though it was special, it was surreal. ’14 I think I had Anaheim 2 and 3, my favorite wins maybe ever just because they were so different. Anaheim 2 I came from maybe sixth, seventh, eighth-ish, just inside of top ten. Passed everybody. RV, Dunge, Stew, and won. The next one two weeks later I came back and I didn’t holeshot, but I think I went to the lead right away and led all twenty laps and kind of won from the beginning. So those two wins were really, really special just because already at that point I was 32-ish.

The comeback one, I remember gave me actual real goosebumps where I’m like, this guy, he’s doing it again. I remember you put a sweet pass on Dunge or something for the lead.

Dunge was actually winning and lost the front. So Dunge actually was leading, so Dunge made it easy. I didn’t have to pass him, but everybody else I had to come through.

The first Anaheim win, like you said, came easy. Honestly all of us on the team at the time were like, this guy, he’s good right now. He doesn’t need seasoning like AC. He’s going to win right now. It almost was like, there it is. We weren’t surprised at all.

It kind of looked like a Jett Lawrence ride, until the poor little guy ran into some issues there at the end. It was. We had a full head of steam. You remember. For me, we went to Europe. Nobody else went. I won the first race in the Netherlands and then got taken out by Tortelli. It’s kind of like I was all fired up for two weeks. I think it was like a two-week turnaround or whatever it was. So I came here. For me, it was the rivalry. Ricky had just come off 24-0. I was the confident little kid that was like, I can’t believe anybody… How you would let a guy win 24 races? I was guilty of that. A couple years later he did it to me. Actually the next year. So I just remember being just full of piss and just coming out like, “Dude, I’m going to win this thing.” I went to Europe. You’re young and you’re going for it.

We’re like, Vuillemin almost won this title last year, and Ferry’s on the box all the time, and Chad’s faster than them every single day at the test track, so I think he’s going to be up there. That was sort of our thinking on the team. I can’t wait to see Stew break you down on one of these videos he’s been doing. You been watching these?

I actually didn’t see St. Louis. I saw Anaheim 1. It was good. It’s funny, because where he said he would do that one quad, I told these guys, “You could totally quad that.” I don’t know why somebody’s not doing it. The face was pretty shitty, but Stew would have seat bounced the crap out of that thing, and at least done it 19 times. Maybe the 20th was upside-down. But for sure he does it. It was funny. When he said that, it was funny because I had already had the conversation like, I know Stew would jump that damn thing. So I think that’s cool.

I think he’s back.

I think it’s healthy that he’s out and he’s seemingly sitting on the couch and enjoying doing these things. I got to call him, actually. I got something I want to ask him to do. Maybe later in the season you’ll see something that could be fun, if he agrees.