The 2021 Yamaha YZ450F is the EXACT same as the 2020 model. So instead of just repurposing last year’s review, why not give you some insight on what I have done to my 2021 Yamaha YZ450F in order to make it a more friendlier Yamaha to ride. I mean these are the same exact mods that I made to my 2020 Loretta Lynn’s bike and it worked great! The Yamaha doesn’t need much done to it, in order to make it a race machine and for that reason I didn’t throw a ton of money at it. The Yamaha YZ450F is one of the few bikes that DO NOT like a lot of mods done to it, so keep it simple and you’ll be smiling every time you get on your bLU cRU. 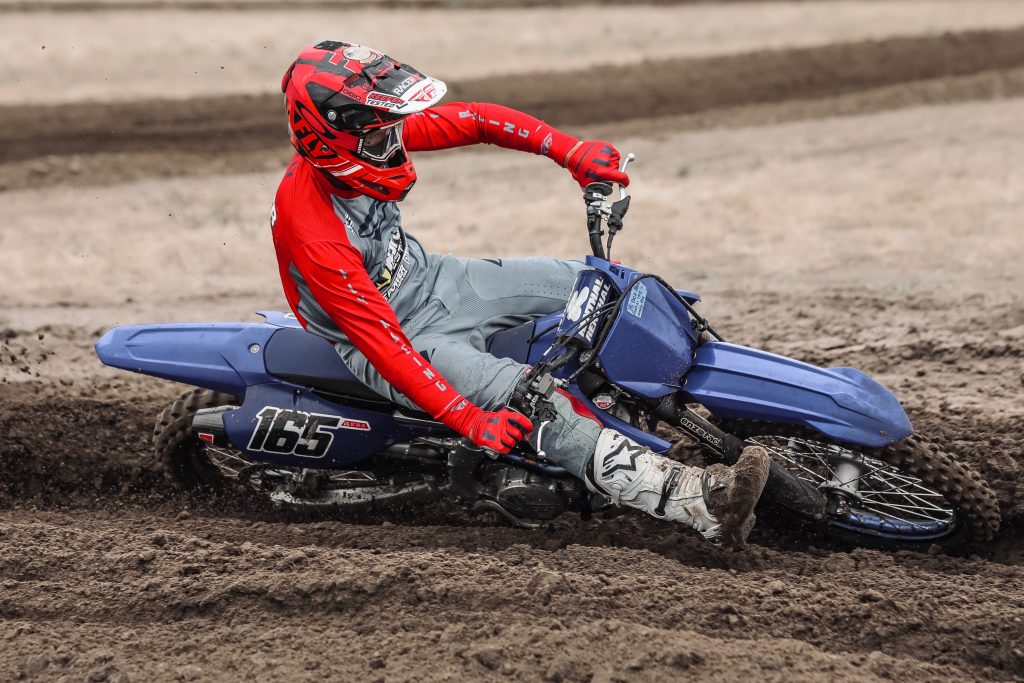 Pro Circuit Ti-6 Muffler System: The Pro Circuit Ti-6 system allows the delivery of the Yamaha’s engine to come on smoother down low and gives the bLU cRU a broader mid range feel compared to the stock muffler. Now, I will say if you want the most hit from your Yamaha, stick with the stock system as that has more low end RPM snap and bottom end pull. I love the KTM 450 SX-F power character so getting the Yamaha to have better roll on through mid corner is very important for me. The PC muffler system makes for a smoother delivery that doesn’t wear you out. 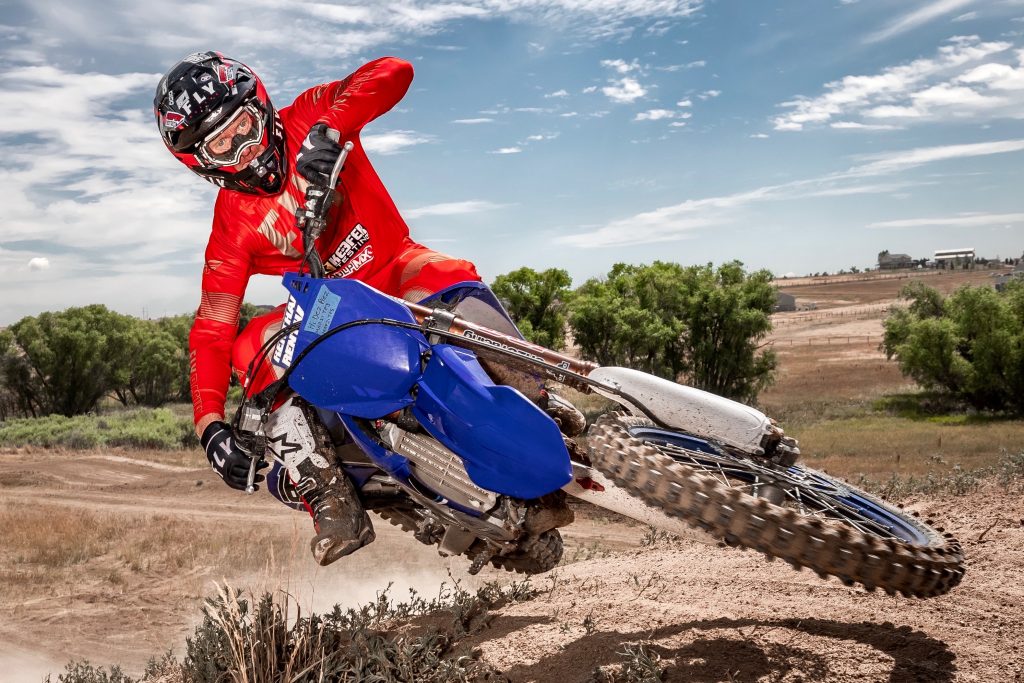 Enzo Re-Valved Suspension: If there is anyone that knows KYB suspension it’s Ross from Enzo Racing. Ross has been doing my Yamaha bump sticks for years and even though I can be a pain in the ass, the guys at Enzo always seem to find a setting that makes me happy. What exactly did I want to improve upon from the stock stuff? I loved that the stock suspension had tons of comfort in the small bump category, but I needed a little more hold up from the stock suspension when pushing it harder over bigger braking bumps. The fork has a tendency to dive a little when off throttle and that can upset the shock leading into area one of the corner. The Enzo guys improved upon the fork by adding more hold up with the valving, but not going so stiff that the Yamaha gave me deflection on braking bumps. Enzo also incorporated their spring tubes. When I tested back to back with the Enzo spring tubes as well as the stock spring tubes the Enzo setting gave me a little firmer feel through the mid stroke and allowed the bike to be more balanced off throttle (less diving). My fork is still relatively soft in terms of a setting, but it makes for more front end feel through corners and that is key for me because I am a front end steering rider. The shock was also firmed up so that the rear of the YZ450F didn’t squat too much under acceleration. An Enzo high speed adjuster was installed on the shock and that can be felt under heavy loads such as g-outs and jump faces. The Enzo adjuster is slightly different internally (the Enzo guys can explain it better to you then I can) than the stock adjuster, but on the track the rear of the bike tracked straighter under acceleration as well as kept a firmer feel to the end stroke. I kept the stock spring rate in tact on both ends of the bike, but only beefed up the valving in order to achieve a well balanced YZ450 on or off throttle.

Vortex ECU: I have been struggling to tell you all about this mod because it’s so hard to justify spending 800 bucks on an ignition when the Yamaha ECU/Power Tuner app is so good. However after working on a ton of settings on the standard ECU, I decided to try the Vortex to see if I could make the power broader with it versus the stock piece. I have worked on settings with Chad from XPR as well as Jamie from Twisted Development and I can say that both gentlemen have spent many days with me at the track trying to make the Yamaha not spool up so quick. You might be asking yourself, “what the hell is spool up”? The Yamaha has a quick revving light crank feel and sometimes that feeling can cause lack of rear end traction when exiting corners. Now this is great when traction is high and the dirt is deep, but once the track gets rough, this Yamaha can be too much to handle compared to a KTM or Husqvarna. Adjusting the ECU via Power Tuner App helps a little, but for safety reasons Yamaha only allows certain parameters, but the Vortex ECU has a wider range of adjustment. Adding the Vortex ECU helps lessen engine braking and also gives the Yamaha a longer power character. Now usually when you get less engine braking in any particular engine character you might feel a more free feeling engine, but with the mapping that Jamie and Chad created, it makes the power more controllable with less pitching off throttle. The maps that we came up with help rear wheel traction out of corners, allows the rider to ride in third gear even easier, yet allows me to use second gear longer out of corners. Once I got a map (with the Vortex) that wasn’t too powerful, I have noticed an improvement in chassis feel when the track gets rough.  The YZ450F can be pushed harder through bumpy conditions now that the delivery of the Yamaha is much broader with less engine braking. I used XPR’s mapping in the Vortex at Loretta Lynn’s as I felt more connection to the rear wheel with Chad’s map at the end of the day. I would recommend either one of these tuners to anyone looking to dial their Vortex ECU’s in. 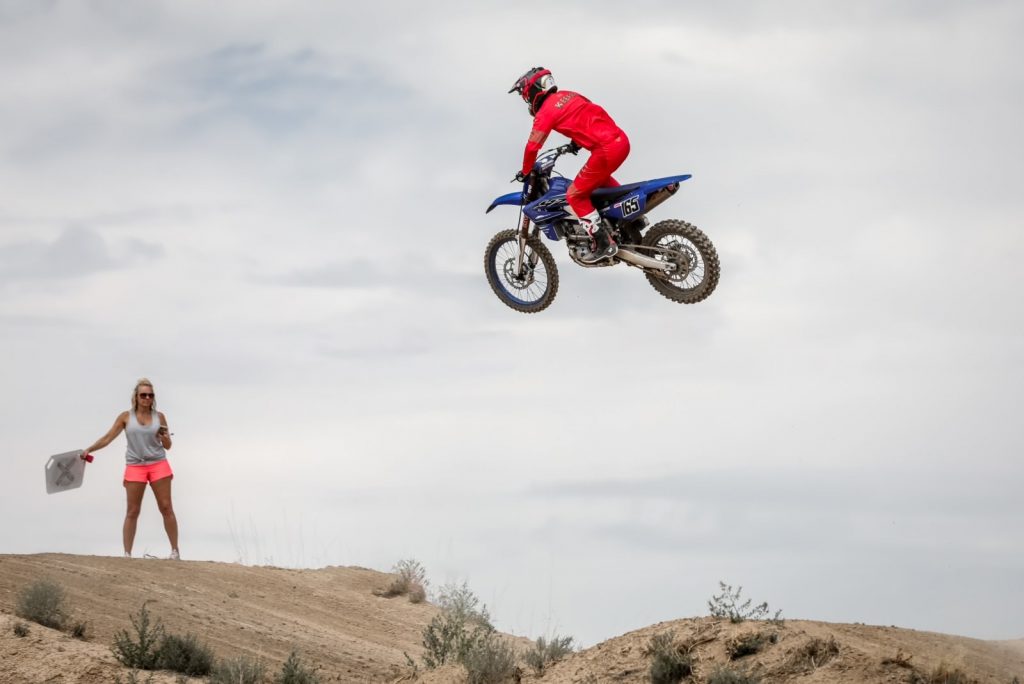 Tire Choice: Even though I raced with Dunlop tires at the ranch, the Pirelli MX32 Mid-Soft tires are some of my favorite tires for the Yamaha YZ450F. I am happy that Dunlop sells the MX3S front tire again because the MX3S has great lean angle traction and a better carcass feel than the MX33 (run the MX3S front at 13.5 PSI and the MX33 rear at 12.5 PSI). The MX33 rear tire is adequate for me and I can get along with its lean angle and forward bite, but the Pirelli’s MX32 Mid-Soft tires are lighter than the Dunlops and have a softer carcass feel, so that requires the rider to run the tires at 14PSI. The Pirelli tires will not last as long as the Dunlop tires because the integrity of the carcass breaks down quicker than the Dunlop. You will notice that the knobs of the Pirelli last longer than the Dunlop, but the Pirelli’s will start to roll more on the rim (under lean angle) when they start to get worn. This is a different way to look at the condition of your rubber so make sure to always inspect the bead of your tires as well. My top two choices for the YZ450F would be a Dunlop MX3S/MX33 or Pirelli MX32 Mid-Soft combo.

Sprocket (Sunstar makes the OEM Yamaha sprockets and they are durable)

Handlebar (Yes, you can go with a Pro Taper SX RACE bend, but I can run the stock handlebar and will not get too upset).

Wheels (The stock Yamaha rims/hubs are durable and can handle some abuse. It’s also cool that Yamaha offers a part number for complete OEM wheels sets).