Zach Osborne is the 2020 premier class Pro Motocross champion and becomes the 25th rider to win the Edison Dye Cup. Zach made it to the absolute pinnacle of the sport in a non-traditional way, spending multiple years racing abroad before returning to race in the United States in 2013. I imagine it’s the challenges he faced learning new cultures and traveling in foreign lands that helped build his undeniable drive and determination. It’s also this drive and determination that solidifies him as the oldest rider to win this championship at 31 years old.

What’s most interesting is how Zach Osborne’s drive and determination won this championship. He wasn’t the fastest qualifier. That was Chase Sexton who took 4 of the 9 fastest qualifier medals. He didn’t lead the most laps or lead laps in the most motos. That was Adam Cianciarulo. Adam used a season leading average first lap position of 3.5 to lead 44% of the laps (131) compared to Zach who had an average first lap position of 4.8 and led -45% less laps (72).

Actually, Adam Cianciarulo was also stronger in first motos. He scored the most points of anyone in the first motos (190), +18 points more than Zach Osborne. Adam also had an average first moto finish of 2.7, grabbed 3 holeshots, led 74 laps, and won 3 motos. He led these stats categories for the first motos. But he didn’t deliver in the second moto.

It was the second moto where Zach Osborne won the championship. It was the second moto where Zach Osbornes drive and determination shined through. You can look to him salvaging 5 points at Round #6 in Minnesota after he got a front flat or his spectacular ride at Round #7 in Florida when he held off the patented late moto charge by Eli Tomac as the emotional victories. Those rides led to him scoring +28 more points than Cianciarulo and a season best average finish position of 3.8 compared to Cianciarulo’s 7.4. Zach also led 50 laps compared to Ciancirulo’s 57. Maybe most important to the championship was that Zach only lost positions in 3 second motos compared to Cianciarulo who lost positions in 7 of the 9 second motos.

Zach Osborne won this championship in the second moto when drive and determination mattered most. He dug deep when the conditions where the most difficult and that earned him this championship. Congratulations Zach! 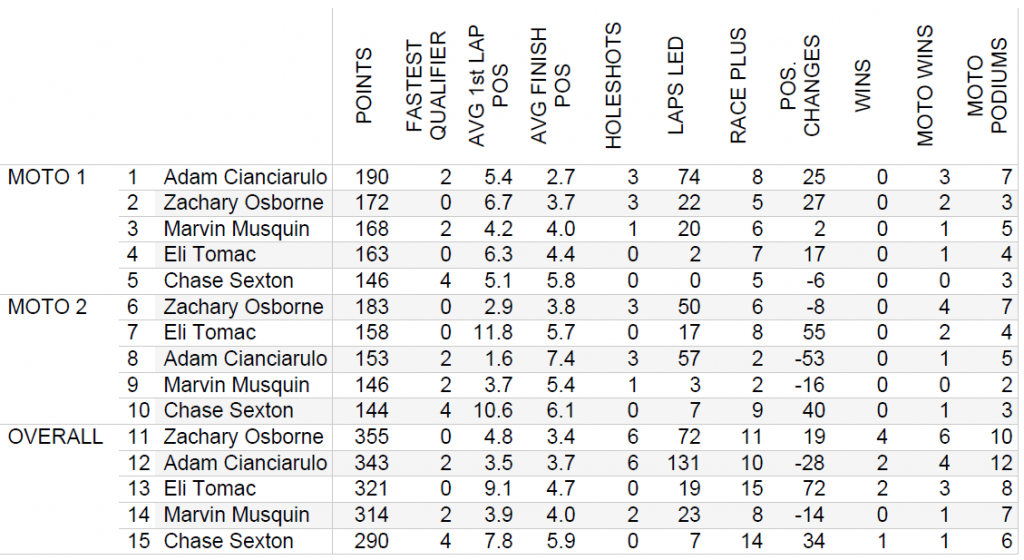 Dylan Ferrandis wins the 2020 Pro Motocross championship and becomes the 32nd rider to win the Gary Jones Cup. What’s most interesting is the similarities between Dylan and Zach Osborne’s experience, specifically there international experience and drive and determination. On the podium, Dylan mentioned “it’s difficult for me as a French [citizen], as a foreigner here in America”. He highlighted that “I work everyday, even when I don’t work, I rest, then I work more”. He’s adapting to a new country, new culture, and he’s used that challenge to focus his energy on singularly being the best rider possible. It’s paid off with his 3rd career championship.

He’s also the first Frenchman to win this title though many have come close. While he may have the help of a Star Racing Yamaha bike that’s won the last 5 of 7 championships, it’s clear that he’s earned this title no different than Zach Osborne, through drive and determination. While he may not be an American citizen, I for one can’t wait to see him in the premier class next year and will cheer him on no different that everyone else on the track.

It’s been a pleasure to bring you this weekly column throughout the 2020 season. If you want to bench race or have some stats you need, drop me a line @3lapsdown on Twitter or Instagram.