Tell Us a Story, Scott Burnworth 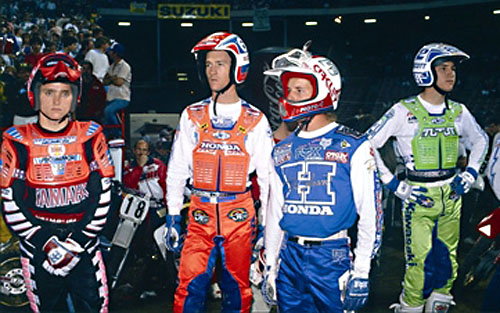 It’s the El Cajon Zone’s Scott Burnworth to tell us about a couple of pics he sent me.

It’s the El Cajon Zone’s Scott Burnworth to tell us about a couple of pics he sent me.

“These photos are from 1986 and I was a Factory Yamaha rider for this year. The starting line shot is from the famous Anaheim ’86 race. This is right before the main event. The three years before this I was on Factory Suzuki but the bikes were a little funky, they had that gas tank in the airbox and stuff like that. It was superfast but hard to ride, well the sx bike was hard the motocross bike was actually pretty good. I got second in 1983 and then in 1984, Suzuki switched to production bikes and I struggled. I broke my collarbone at Houston, the bikes were notorious for bottoming out and shooting you over the bars. I have five broken collarbones on one side from the “Swap-zuki!” In 85 they went back to works bikes and I had decent results that year. I know I got a lot of holeshots but they didn’t pay anything back then, I could’ve retired with all those checks.

At the end of ’85 I wanted to ride 125’s in the nationals but they wouldn’t let me. I was friends with Broc Glover and he was putting a word in with the guys at Yamaha, he said they should talk to me because I wanted to ride a 125. So we agreed on the 125 thing, I can’t remember if Suzuki wasn’t going to sign me or not. I wanted something new and the bike was ok. It wasn’t very good, way down on power and I struggled to get fourths here and there. I could just never pull it off against Micky Dymond’s bike (laughs).

The 250 in this picture wasn’t too bad, it wasn’t the best bike in the class and me being a lesser rider, I had to ride over my comfort level. There were a lot of fast guys, I think about it now and realize that it was crazy. What was a guy supposed to do? It was hard to keep your confidence up when you’re fifth and sixth. You have to try and just climb the ladder I suppose.

My contract was for $50,000 which was pretty good back then. I think I made the most money in ’83 when I got second in the series. You can see in the starting line my mechanic in the background. It was Bob Oliver, who is still there today. Just a great guy, I liked working with him. He was a really great mechanic also. I don’t know if it was such a great combo because we were both really quiet guys, sometimes we just wouldn’t talk (laughs).

My gear really stood out also, it was Hallman and I knew Bob Maynard down in San Diego and the deal came together easy. In ’85 I wore that ‘Gear’ gear and I had to get something else, the pajama look just wasn’t cool. I went out for some more California stuff. The chest protector might be a kids one or something! It had the half shell so I could bend over I guess. The black and orange are cool for sure.

At the famous Anaheim ’86 race I was first going into the second turn and looking ahead, getting ready for the triple. Then RJ came in and cleaned me out bad. He was going way too fast to make the inside rut and flew into me. I was going outside to in to get set for the triple and BAM, he knocked my front tire out. I actually had the photo of me laying there with my face in the dirt, I remember that it was nice and soft on my face (laughs). Yeah, I got up and was like ‘God Dammit’ I was pissed, I was a lap down and knew I was going to do something about it. I was never that guy, I wouldn’t take anyone out but I did move over and slow down RJ a bit. After watching the race, Bailey would’ve won anyways I think. I really don’t think I affected the race.

On the starting line shot, look at Ron Lechien just staring off into space, he’s probably wondering where he was going to go later that night after the race. It’s funny in this photo to see me, RJ and Lechien on the line and we were all from the small town of El Cajon. I equate that to the Murrieta now, I don’t know why were all became fast. We all grew up with tons of places to ride and had Carlsbad and Saddleback close by. It was a little bit of coincidence that we were all from there. There were a couple different places to go in El Cajon to practice and we wouldn’t really go together too much. We all kind of hated each other. You would go to Palm Avenue down there and see Rick and Broc once in a while but it wasn’t too often. I would never see Ronnie riding too much (laughs) but I’d see him out at the Jet-Ski pond all the time!  We were skiing buddies for a while, like ’86 and ’87 were big Jet-Skiing years.

That was it for me at Yamaha, the next year I bought a Honda and got Mitch to do it up. I only had one bike and practiced and raced on it. I went to Anaheim and these guys from Spain came up to me and asked me to ride the Spanish National championships and some GP’s. That’s what I did, I stayed over there for six months and hung out and raced. I won quite a few races and had some fun, it was a lot more laid back then the US scene. I did two GP’s-one in Portugal and one in Belgium. I did ok in Portugal but the Belgium one was just sand. Like four foot whoop everywhere and I was not a sand guy. I just wanted to go back into my van and cry. My mechanic didn’t speak a word of English and we just kind of sat there on the long drive from Spain to Belgium.  I got kind of homesick so I came back during a break and raced a Mickey Thompson event that was going on. The tracks were super fast and there was a kicker jump there that I looped out on or something. I tore my leg up and messed my hip up and I was done with this crap (laughs). My friend was starting a Jet-Ski company and kept bugging me to go work with him. He said it would be a good time so that’s basically what I did.”

Still For Sale- 2009 YZ450F..Ridden a bit more than last week, very fast. Something wrong with the clutch...

I tried to resist but couldn't-pulpmx is on Twitter now.