Pictures Are Actually Worth 1,099 Words 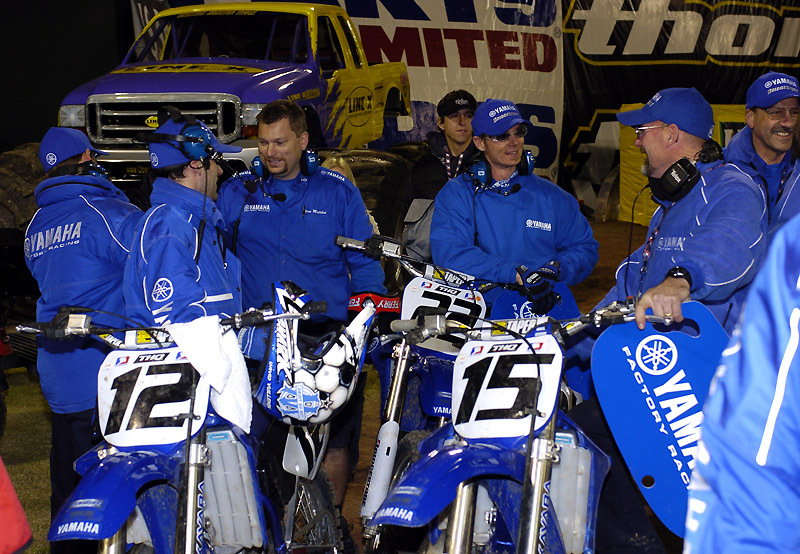 Ahhhh, memories. They linger in your mind and sometimes, over time, the thoughts that you have about them change. The feeling you have in a moment of time is influenced by what’s going on around you, the state of your mind at the moment and many other factors. Years later you can look at a photograph and all the old feelings rush back. Sometimes they match up to the original feelings, sometimes not, but no matter what-pictures are timeless.

Ahhhh, memories. They linger in your mind and sometimes, over time, the thoughts that you have about them change. The feeling you have in a moment of time is influenced by what’s going on around you, the state of your mind at the moment and many other factors. Years later you can look at a photograph and all the old feelings rush back. Sometimes they match up to the original feelings, sometimes not, but no matter what-pictures are timeless.

These shots were taken by Carl Stone and they were snapped immediately after the main event at Anaheim 1, 2004. I was working as Ferry’s mechanic at Factory Yamaha but not at this race. See, what had happened is that, me being Canadian, I worked legally in the United States under a work visa that I renewed every year. Every year I would pay my lawyer $700, get all the paperwork filled out and visit a US border crossing to get my visa stamped which allowed me to work at Yamaha (or whatever team I was on be it KTM, Moto XXX or FMF Honda.) So after the 2003 season Keith McCarty approached me about the visa and in a nice gesture, said that Yamaha would apply for my visa for me and absorb all the costs.

I wish I would’ve said no.

As I stated, I would go to a border crossing and have all my paperwork properly filled out and it was an in and out deal. Oftentimes, I would fly into Toronto, rent a car and drive to the border, get the visa approved and turn around and fly out that evening. It was relatively simple. Well, as relatively as applying to work in a strange country could be anyways.

So Yamaha’s lawyers got busy on my application and when I asked about the border crossing and all that, I was told that it was not necessary and that they would be applying at the head INS offices in Nebraska. Now, I was no immigration lawyer but I knew this was going to be trouble. See, my visa was legit but it was stretching the truth a little bit as far as what I would be doing. I was under the category “Scientific Technologist” and was supposed to technically work under an engineer. Of course my team manager Jim Perry was many things, but an engineer he was not.

So it wasn’t much of a surprise when INS denied my visa, they sniffed out what I was doing. Which was basically working as a parts-changer. I then tried to just see if INS would “forget” about that first application and I could go back to my usual routine but no luck on that. We appealed and that got shut down as well. Without being legal, there was no way that I could work at Yamaha and continue to assert my influence on Tim Ferry’s career. Please hold back the laughter here.

I was screwed. So with the appeal denied, my chances of working at Yamaha not looking good and with having 90 days until I had to “please leave the country”, I did what many foreigners have dreamed about doing for many years.

I found an American girl to marry.

It wasn’t exactly the proposal that my girlfriend Angie (or any other women in the whole world) had dreamed about. It was me coming in our crappy apartment and saying that my appeal got denied and it looks like we “have to get married.” I fumbled the wording pretty bad, no doubt about that. By the way, whenever tempers flare to this day, I’m reminded that she’s the only reason I’m here. So this was already late in the year and luckily for me, Yamaha was standing behind me with whatever decision I wanted to make. So the wedding was set, it was going to be just after the New Year (on a Tuesday naturally, like so many other weddings) and Angie and I went down to Corona Del Mar to tie the knot. It was us, the preacher and the photographer. We had trouble finding someone to marry us on such short notice. It was almost like they were thinking that this quickie marriage was doomed to fail, that I was just doing it for a green card. Man, they were so far off base, it’s not even funny. Errrr….

Randy Lawrence saved us when he found a dude that agreed marry us. It was a younger guy that had his tongue pierced but God bless him, he was super cool and hooked us up. The photographer? Well I did what any self-respecting motocrosser would do. I called up my buddy Donn Maeda from Transword Motocross magazine and he came down to shoot us. I swear I’m not making any of this up.

So that was it, I was now married, the paperwork was sent off and I just had to wait. But in the meantime, I was out of work.

Yamaha was really cool though, I obviously couldn’t work in the shop or collect any money but I could go to the test track and help out Ferry. I could work out of a box van at my apartment. I was basically back to being a privateer mechanic only my rider was a factory guy. So with the racing year upon us, I was at the races in a support role only. I wore the shirt, ate the food (what, you expected something else?) and hung out all day but I was not technically Ferry’s mechanic.

At the first race, with no RC on the scene, Team Yamaha swept the podium at the opening race of the year. Reed was in a class by himself no doubt about it but Ferry was in second before making a mistake and allowing DV to get by him late in the race. This was the first season Timmy was on the two-stroke and he was pounding out motos at home. I can remember going to his house and watching him do 3 twenty-lappers in succession. He was a man on a mission and I think it would’ve been a great year.

A couple weeks later he fell in practice at A2 and broke his wrist. That may have been the end of his supercross season, but for me it was the start of a great marriage that’s still going strong to this day.

That’s what I think of when I see these pictures. The feelings that I had then are still the same today, almost six years later.