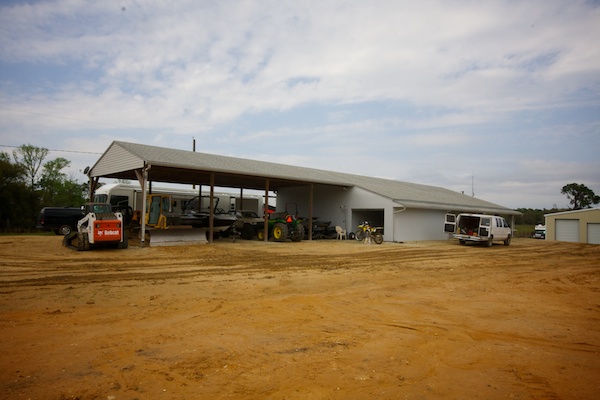 Quick though heavy rains almost made day two a wash.

Quick though heavy rains almost made day two a wash.

I woke up tuesday to the depressing sound of heavy rain outside my window. Depressing because I knew that was going to make going to RV’s a grim possibility. Matthes was already downstairs working on his Larry Brooks story for RacerX, I asked if RV’s was out, he said yeah they weren’t riding so I started making plans to walk Fergie and Laila. Matthes texted Reedy about the chances of us coming out today and he said no problem. Sadly, the dogs didn’t get a walk but I was still going to be shooting stills and video, exactly what I had planned on. Winning!(in my best Charlie Sheen voice).

Timmy left before us because he had a moto school to do with a group of youngsters. Yes, he took the 125cc folks!

We departed for the hour long drive to Reedy’s stopping at the plaza we chose for breakfast most days where Matthes grabs coffee from Starbucks and I hit up Panera for a bagel.

We arrive at what Matthes believes is Reed’s gate, it resembles the land before time from the movie Great Expectations. Very remote and from the road and simple but effective gate you would never assume a moto heaven would lie at the end of the path. Matthes enters the gate code, we cross the threshold and suddenly I gotta take a leak. Following the path to the shop we literally have to drive off the path around a cow who is completely unaffected by the sight of a 2011 Crown Victoria rolling toward its melon, yup lying in the middle of the drive.

We round the last corner and see the first building with the TwoTwo Motorsports race rig parked right next to it, yup this is the place. There are quite a few people there, all busy doing something. Cleaning the rig, working on bikes, talking, it really had the same comfortable laid back atmosphere as any ride day with your buddies. We walked around the place, Matthes was small talking while I was just checking it out and wondering when I was going to bump into Chad and have him say who the eff are you and what are you doing here? We walk around the other side of the building where the bike wash is and the entrance to the trophy room and JT$ is sitting there and Chad is walking into the trophy room. Chad says to Matthes, “hey I read that article on your site, you didn’t write it but it was good”. Matthes says, “yeah, he wrote it”, pointing at me. Chad says, “oh, you’re Swizcore? Good to meet you, it’s nice to put a face to a name”; and we shake hands. A much better introduction than I expected. It’s not that I had a bad impression of Chad before we met but I mean, I’m a stranger at his house and as you know the elite riders are a bit secretive, so I wasn’t expecting him to be so laid back and cool with a stranger in his scene.

JT, Matthes, Chad and I go into the trophy room where JT is taping up his knee and they are getting geared up to ride. Matthes notices Byrner’s dogs on the couch and notes that he wishes he had a Raider’s collar to replace the Steeler’s collar on Byrner’s dogs( in case you didn’t know Byrner married into a SERIOUSLY committed Steeler family). This seemingly insignificant observation evolved into a discussion of Ben Roethlesburger ultimately wrapping up with an amazing JT one liner which would be repeated multiple times during the trip, always followed by some good laughter. Here’s the cliff notes version. Matthes noted that Dani Byrne didn’t like it when Matthes would refer to the Steeler QB as Ben Rapelessburger, which naturally evolved into JT mentioning Kobe Bryant and his rape trial, leaving us all speculating on how much his accuser settled for. The phrase we found much joy in laughing about was JT’s answer to that inquiry. His answer,  “How much is your butthole worth?”

Mark “The Bomber” Barnett was out at Reedy’s riding a little and dozing a little. Bomber is a cool dude, we talked about playing hockey and stuff, he still looks good on a bike and Matthes and I found some humor in the Bomber really liking our Crown Vic.

The two SX tracks had been ridden only once since being rebuilt a week earlier but they were too greasy from the morning rain to ride that day. Matthes and I walked out to the MX track where Reed was riding that day and I got my still camera out and started shooting. I took an ill fated step on the side of a tabletop on a gathering of red ants who quickly started biting the shit out of my ankle for the next 15 minutes while I circulated the track snapping photos. Reed was concentrating on 5 laps sprints that day so I had to snap and run to assure as many vantage points as possible during the quick sessions.

Bomber put the bike on the stand and Chad had him build a whoop section, it was long and they were pretty peaked, gnarly for sure. Chad rolled through them slowly once and then hit them about 10 times hard, each pass getting faster. Matthes had the idea of going for a Speed TV Daytona SX style ride along the whoops with the video camera. Hell yes, I was down. One little issue though, about halfway through the whoops where my vehicle was driving there was a dip about a foot deep and 5 feet across. At a snails pace, that’s no problem but at “Reed Speed” through the whoops, its a launch ramp capable of resulting in ejection, maiming and dismemberment to an unsuspecting cameraman. Lars, Chad’s race mechanic and seriously awesome guy, was my chauffeur for the pass. We started at the landing of a table just before the whoops, ahead of Reed so he could catch and pass us for the shot. It went ok, until we hit the low spot at speed. My ass came about a foot off the seat and my saving grace was a left hand stab at the base of the seat, it connected and I saved myself from certain pummeling beneath ORV wheels. We figured we’d try it again from before the table which would have us pacing him through a corner, some rollers, a double, the table and the whoops. Well, Chad buried us before we hit the double and we never caught up. Gnarly. Maybe I’ll post the footage sometime but it’s very unusable.

We headed back to the race shop which is on the other side of the trophy room where Byrner’s bike was being worked on and Chad’s race bike was being built. Chris Gosselarr was riding at Chads as well and he was hanging out between sessions at the race shop as well. He threw a pretty awesome whip over a big double which I snapped a sequence of shown below.

At the race shop I asked Reed if there was anything I couldn’t photograph and he said “I don’t think so”. He verified with Lars and I started snapping away. I circulated the race shop shooting whatever I wanted, it was pretty awesome.

I can’t emphasize enough how laid back the atmosphere was, I felt literally like I was at a buddies house on a ride day where there was no pressure and no stress. Really comfortable even for a total stranger.

Just before we headed back out to the track for another session, I made good on a promise to the Twitterverse and made my face to face request to JT$ to come back to Twitter. He said he was and the birds began chirping. Matthes then interviewed JT and we headed to the track.

The guys finished up riding for the day and Matthes interviewed Reed, which was preceeded and followed by JT telling Matthes he’s a horrible interviewer and how he could do a much better job. He wasn’t biting when Matthes asked him to show him how to do it. I recall a mention of “softball” questions. Funny. This was also about the same time that I presented the “Cat Theory” to JT. Just like Red, JT wisely agreed with me adding the specific reference of “Garfield” to the theory. Im thinking this theory will end up on Wikipedia any day now.

Chad was heading out for dinner plans and Matthes and I were loading the Crown Vic to leave, Chad came back over and said, “Good to meet you Swizcore, thanks for coming out”. He may very well have been posturing to an internet nobody who has a voice on Pulp but you know what, that doesn’t mean shit to me, all I know is what I saw while I was there and Reed was personable and seemed totally level headed while I was there. I really couldn’t have imagined a more comfortable visit to a top 3 SX racers inner circle.

It wasn’t until Matthes started the car I even realized we hadn’t eaten anything since the breakfast. Off to dinner! On the way out of the driveway we saw Lil Goose and one of the guys from Team Two Two boarding a blow up boat in the pond next to the drive, a sketchy pond where alligators are CERTAIN to live. Check out the sight below.

We hit up Subway for what we both agreed were the best subs we have ever eaten in our lives. The fact that we were starving may have been a contributing factor to that opinion but it doesn’t change our perception.

We arrived at Timmy’s to find a delivery from Scott Motorsports, Timmy arrived shortly after us and he was very excited about the delivery. So much so that he strapped on the helmet and boots and invited Matthes into the john for a special photo meant for solely for John Knowles of Scott. Easy folks, it was a simple, tastefully done(?) sit down on the toilet shot.

Matthes and Timmy made their nightly trip to Starbucks while Evie and I enjoyed some more conversation, I believe this one was mostly about the enigma that is Timmy Ferry. As a side note, Matthes tried three times to get me something from Starbucks that did not taste like coffee. He succeeded once with a vanilla bean shake, the others failed. Sorry for the wasted dough Steve.

We wrapped up the night with American Idol where Timmy’s eyes were glued to the tv, any attempt to talk was met with a shshshh!!!!

Check out some more pics from around Reedy’s below.