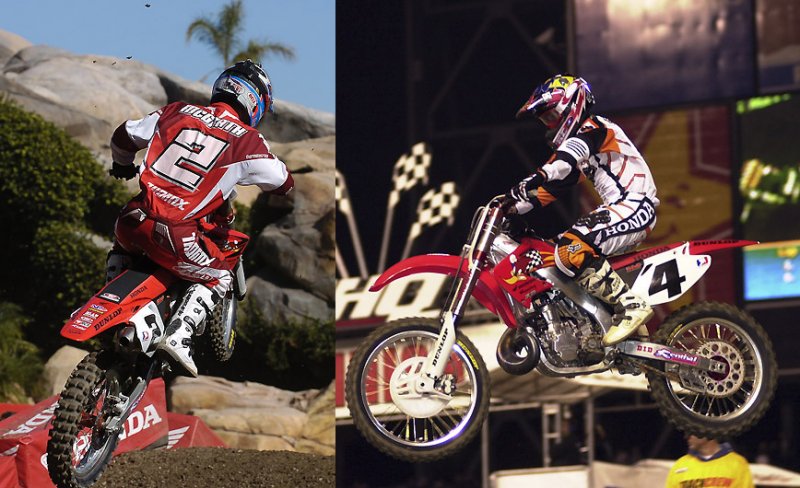 Some off-season bench racing, should Ricky Carmichael be called the GOAT?

Some off-season bench racing, should Ricky Carmichael be called the GOAT?

We get a lot of email here at Pulpmx and last week one in particular caught my eye from a reader/listener named John. Here it is:

This makes Ricky the GOAT in my book. Jeremy is the undisputed king of supercross and an awesome rider. He is one of the best of all time. I am a big fan of his. But, Carmichael is the GOAT. Your credibility went from a 9.5 to a 7.23. I can only hope that everyone gave you a bunch of shit for that comment since it was over a year ago.

P.S. I really like the interviews on your show and the news articles in Racer X. Keep up the good work.

Thanks for writing in Dave and I wrote you back a long explanation. I do think that me calling MC “the goat” was in jest as well as saying that RC had half the wins Jeremy does. Dave also seems pretty angry with me in most of the mail but wraps it up that he likes my Racer X stuff so I think we’re on good terms. To recap the deal, I did a podcast with Jeremy McGrath where I asked him about people calling Ricky Carmichael the GOAT (which stands for The Greatest Of All Time which is what Muhammad Ali was called in the 60’s when he was boxing and was given to RC in an interview by former rider Matt Walker. Somehow Walker became the bestower of this nickname which always puzzled me but anyways) because RC wasn’t the all-time winningest rider in supercross, MC was. As a matter of fact, it’s not even that close. Jeremy has 72 wins indoors and RC has 48 which is a difference of 24 wins or you could say that RC has 66% of MC’s win total.

Of course MC took the high road in this and said whatever, he can be “The King” and RC can be “The Goat” and we’ll all live happily ever. And I agree, in the end this isn’t that big of a deal but it’s the off-season and a good debate I think.

Let’s get this out of the way first:

Ricky Carmichael is the best motocross rider that’s ever lived in the world. Yes, better than Stefan Everts, Joel Robert or Bob Hannah. The numbers are there to back it up. Two perfect seasons and he has an astounding 49 (!) more wins than Hannah who is second.

But the thing that I have an issue with is being called The Greatest Of All Time because to me, since 1972 or so, our sport has always had an indoor and an outdoor series. You have to dominate both disciplines to be called the GOAT and that’s where RC falls short to MC in my opinion. Jeremy has more wins and more titles than RC indoors and you can’t be the greatest of all time without owning ALL the records. That’s my opinion and I realize that I’m in the minority in these thoughts but hear me out.

Wayne Gretzky is commonly referred to as the greatest hockey player of all time because he has the most goals and the most assists ever, there’s no one close to him. Mario Lemieux actually scored more goals per game than Gretzky but played in less games, scored less goals and he’s never called the greatest hockey player ever. Michael Jordan is considered the greatest basketball player ever because he has the highest scoring average per game out of anyone in history. He holds the record for playoff games as well. Besides the bench-racing about Jordans MVP awards, his transcendence of the game, his amazing skills, there’s always the record books to point to. End of story, game over.

What I’m saying is that Gretzky and Jordan are called the greatest ever and have the stats to back it up. I could even see myself perhaps bending a bit and call RC the GOAT if he was say, five wins behind McGrath because after all, he missed one sx season with an injury and competed seven years in the big class compared to MC’s ten but he’s 24 wins behind MC. He would have to have 50% (!) more wins than he currently has to tie McGrath and that folks, is a lot.

Plus, I have the eyeball test to go by and since I joined the circuit in 1996 I got to see a lot of MC’s sx wins and then practically all of Carmichael’s as well. I can say that to me, without a doubt, supercross came easier and was dominated by Jeremy McGrath. With Carmichael, he often had an equal in Chad Reed or James Stewart and would use his consistency and his smarts to win titles in later years. Don’t get me wrong, RC wasn’t slow on a supercross track but at times there were more than a few riders that, to me, had him covered on a supercross track.

On the track, using the eyeball test, I’ve never seen a better supercross rider than Jeremy McGrath. RC did things on a motocross track that were amazing but in supercross, it didn’t come as easy, no doubt about it. McGrath was as dominant indoors as RC was outdoors, he would win many races easily and without a lot of effort (for him anyways). You know, sort of like what Ricky did outdoors.

Yes you could point to the fact that RC dethroned McGrath in 2001 and say that he was better and in that season he was. But no one can stay on top forever and what about the ’99 and ’00 seasons where MC put more hurts on RC? I’d say their head to head seasons were a wash, MC was better at the beginning and when the torch was inevitably going to be passed, RC picked it up.

I know RC obliterated every single motocross record there was but that doesn’t make him greater in my eyes, he’s already the greatest motocross rider ever to me. He can’t be any more-greater to me whether he has the record by ten or ten thousand. He’s the best when the roof is off, end of story.

But if you’re going to be called The Greatest Of All Time, then I think, like Gretzky and Jordan, you have to have all the records and in this case it’s not that close.

Long live the King of indoors AND the King of outdoors, the GOAT is dead and this debate will continue on.

Leave your thoughts below…