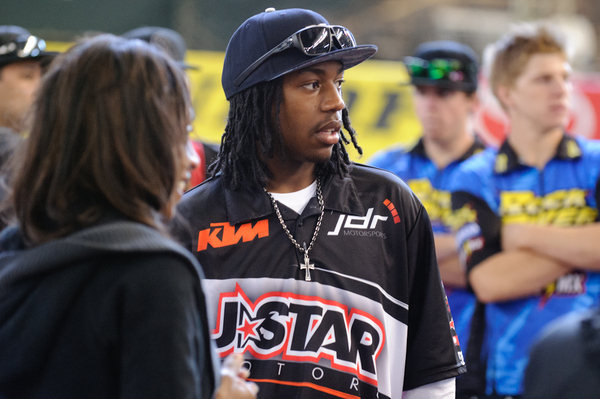 Our ace cub reporter Moser takes a look at the guys who came up just short this weekend at Mt Morris.

Our ace cub reporter Moser takes a look at the guys who came up just short this weekend at Mt Morris.

A Short look at some Shortcomings from High Point and/or Mt. Morris

Why does the High Point national have two names?  It’s advertised as HIgh Point but most of the riders and industry folks refer to it as Mt. Morris, like they know something we don’t know.  If you have the answer to this brain teaser please email Weege who will forward it along to me (find his contact info at the bottom of the page).  Lots of riders to pick from this week that had Shortcomings but this is a Short column and only one rider per class can get his Short time in the spotlight.

If you are the younger brother of the fastest man on the planet by default that makes you the, well I believe the technical term is red headed step child.  Mookie never made a name for himself in the amateur ranks and let’s be honest who would want to follow in JS shoes?  Sure your brother is a millionaire and you get to live the good life, riverboat gambling trips, beef jerky, lots of free swag but you will always be compared to your overachieving brother.  I’ve heard people voice the opinion that when brothers are growing up racing together, generally it’s the younger brother that benefits from always chasing his older brother and eventually becomes the faster rider.  Sure there are some examples of faster younger brothers that come to mind, Hot Sauce, Blake Wharton, Ryan Morais,  But currently I think there are just as many or more older brothers racing that are having more success, RV, Ryan Sipes, DD, Mike Alessi, JS.  The “younger brother is usually faster” has just become an overused cliche in my opinion.

I never watched the Bubbas world show so I don’t know where the Mookie nickname originated from but it has a catchy ring to it.  I was actually surprised when Mookie went pro, he didn’t seem very interested in moto as a kid and although he had shown some speed at times he didn’t light the amateur world on fire.  When you’re the lil bro of JS though the believe the hype talk naturally comes with it, guilty by association.  Mookie has proven to be consistent, he’s consistently fast and consistently cartwheels.  It’s impressive the kid isn’t hurt more often he averages close to a 50% crash rate.  This season it looks like he tried to slow down to go faster technique but it hasn’t really be working out for him.  Mookie seems like a funny kid in his interviews to bad he won’t come on the Pulpmx show because he doesn’t like Matthes despite Matthes seemingly being a fan and coining the term “Mookie Fever”.  I do admire how Mookie has gone his own way most people myself included assumed he would just step into a ride on the same team as James, but he hasn’t taken the easy way out and he’s putting in his time in the SX2, MX2 classes.  It’s a good thing he’s on the KTM because I think they have a pretty strong motor as Mookie isn’t small, he’s huge and hands down the largest rider on a 250F bike this season, with a close 2nd going to Tyler Bowers who is 7’ tall but pretty skinny, regardless I feel sorry for those poor bikes.

What’s with the dreadlocks though they can’t be comfortable in a helmet.  He for sure had to go up at least one helmet size because I remember getting haircuts as a kid and having my helmet feel loose afterwards.  I wonder if having that much hair in your helmet makes it safer or more dangerous on impact, actually with how much Mookie has hit his head this season I think he’s proven it helps.  There is no doubting Mookie has skills but he continues to consistently crash and DNF’d both motos in Mt. Morris or was it at High Point.  I think it was Matthes that mentioned just when you want to point to Mookies size as hindering him on the 250F he puts in his best ride of the outdoors this season in Lakewood at elevation where the bikes are slower, so much for that theory.  I would like to see what Mookie could do outdoors on the bigger bike and don’t get me started on that other overused clique of riders that are better on 450F’s than 250F’s.  Every rider that has ever moved up to the big bike class has stated that their riding style really fits the big bikes better and have always considered themselves a better big bike rider.  While they are at it they should just give it up to their team, keep their head down and give it 110%.  One commonly used phrase that rings true is that most of these riders are just kids and Mookie still has lots of time to get this dirt scooter racing thing figured out.

Getting the opportunity to do a full spread on Dustin Pipes has been a long time coming.  Dustin Pipes is sponsored by Pipes Racing, could this get any better.  I don’t know anything about Mr. Pipes so let acquaint ourselves with where Pipes lays at night and swings around in the mornings.  Mr. Pipes is from Fresno CA which reminds me of a couple semi relevant stories.  My dad lived in Fresno growing up and he said it would get so hot you could cook an egg on the sidewalk there, I still don’t know if I believe that story because the older I get the more I realize by dad liked to eff with my young innocent mind and would feed me innocent fallacies that I’m still trying to sort out, but I think that story was legit, and/or I’m very gullible.

That story reminds me of another story about a pro rider from the Northwest by the name of Rusty Holland who also grew up in Fresno.  This story I actually told on the Pulpmx show one of the first times I ever called in years ago, it’s related to Pipes or at least in the same family.  Rusty was racing an arenacross in the Cow Palace in California, he was on the line of the 250 (2 stroke) race, shaking his goggles out getting ready for the 30 second board to go up.  His mechanic was keeping the bike warmed up but was revving it so high that Rusty became uncomfortable in his undercarriage so he shifted his weight from his right foot to his left foot.  In the process he managed to drop the bike into 1st gear and conveniently the mechanic had the throttle wide open at the time and the bike rocketed into the starting gate.  Rusty flipped over the bars and landed on his ass in front of the gate, meanwhile his bike had ripped all of the starting gates out of the ground.  That story still makes me chuckle to this day.

Alright so what else is there to know about Pipes, looks like he’s on twitter @DPIPES_652 give him a follow and scroll through his timeline when you have 29 seconds some good stuff in there, although it drives me nuts when people don’t upload a photo to get rid of the egg profile pic.  Google can tell you a lot about somebody these days, but it would be reckless journalism to assume things about someone just because you read them online, well reckless is my middle name.  Google is pretty much calling Mr. Pipes a cheater as he was docked twice in Supercross once for cutting the track and once for jumping when the red lights were on, when your name is Pipes you race by your own rules.

Mr. Pipes is sponsored by Race Tech Suspension (citing Race Tech Facebook page for that info) I’m sure he runs the gold valve kit, JT$ dad Frank is a big supporter of the gold valve kits his face may or may not even be on the box, so why aren’t you running one?  Pipes has some cool named sponsors Pipes Racing is the only one listed on the AMA scoresheet, no word on how fast or slow Pipes Racing is or how long they have been banging away in the industry.  Other people that help support Pipes are Guts Racing (advertising slogan you gotta have the guts?) Snuffy racing which I could interpret two ways as in snuffing or as in snuffaluffagus that woolly mammoth looking thing on Sesame Street, next up is Webcams, not a real shocker there a guy named Pipes getting picked up by Webcams seems like a good fit to me.  I almost forgot the most obvious sponsor that should get mentioned who is the pipe provider for Pipes, it appears to be FMF I can’t believe that Lil D hasn’t worked this into their advertising campaign yet, if I needed yet another reason to pull for Pipes at the races having FMF run a “Pipes” ad would be it.  Last but not least is ODI grips who is also a sponsor of the man with the magic hands, one Andrew Short.  ODI advertises that their grip is a better fit for riders with large hands so that answers that question about Pipes.  There are several unanswered questions I have about Pipes I feel like we’ve just covered the tip of what Pipes has to give, where does he hang, is his dad a working stiff?  I’m going to keep one eye on Pipes and maybe in the future if we cross paths again I’ll get to know him a bit more and we’ll take things a little further.

Thanks for reading this Short recognition of the guys that had Shortcoming this weekend, see you next week Moser

Please send any comments to jasonw@racerxill.comhe reads them while wearing head phones.

Tell Us Another Story Ron Lechien