Here at PulpMx, we’d like to give you a reason to listen to the podium interviews, so today, Klinton Silvey points out a few trends in racer vernacular.

Here at PulpMx, we’d like to give you a reason to listen to the podium interviews, so today, Klinton Silvey points out a few trends in racer vernacular. He isn’t targeting anyone in particular… and maybe he’s a little bit nitpicky. You’ll just have to watch the podium interviews (and who happens to be riding by in this lead picture) a little more closely and decide for yourself.

They take it serious, seriously. I know EXACTLY when the death of a proper adverb occurred. It all started back when Ricky Carmichael was riding for Suzuki. There was a Suzuki commercial featuring RC, Doug Gust (I think) and some other Suzuki people from various sports all making little one-lined comments about training. And then the GOAT said, “I take it serious.” From that point on, Webster’s dictionary took the “ly” off of seriously and racers started taking their training serious. All of them.

If you didn’t know, it’s hard to pass in Supercross. How many times have you ever heard an SX rider say, “Man, there were so many good lines in the track, it was really easy to make passes”? Zero? Yeah, me too. It’s supercross. 90-degree turns are unavoidable, and sometimes you just aren’t fast enough to pass in the 180s that are there. I think it’s time to let this one go.

“We” I used to think that motocross was an individualistic sport. Sure, it takes a team to get the rider on the track, help with bike setup etc., but ultimately I assumed the rider and the rider alone had to get the job done on the track. Apparently, I was wrong. Lately, riders have had their team with them on the bike. I know this because they refer to everything that happened on the track as a “we” situation: “We weren’t getting through the whoops good,” “We got a good start,” and so on. Maybe everyone is secretly running helmet radios ala Alessi at Monster Cup.

Giving it up Our favorite racers might have a hard time thanking the people supporting them, but they sure do give it up to them a lot. Never before has there been a greater need to define what “it” is. I mean, in high school, it wasn’t always the best for a girl if she was known to “give it up” a lot. But I’m sure this has to mean something completely different.

Get it done See above.

They can’t make up their minds Ask a rider if anything whatsoever was positive or negative about a race. They will, 110 out of 100 times reply first with the word “No,” followed by a, “Yeah, it was good/bad.” Just try it.

They are super-pumped Unless they are talking about classic 90s’ b-ball sneakers, I’m not going there.

The Dunlops were hooking up great. (Does this smile look fake?) This bothers me for two reasons: First of all, unless you are on the JGR team or the BTO team you don’t have a prayer of winning on anything other than Dunlop tires. It’s a given. Practical monopolies don’t need that much publicity. However, I can at least tolerate the name drop. But, what I cannot stand is the fact that this mindless line usually comes on the heels of whining about how slippery the track was! All “Dunlops were hooking up” references should be banned from the California rounds, Phoenix, Dallas, Atlanta… Oh wait, that’s all of them so far. 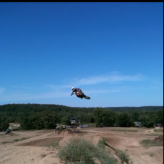