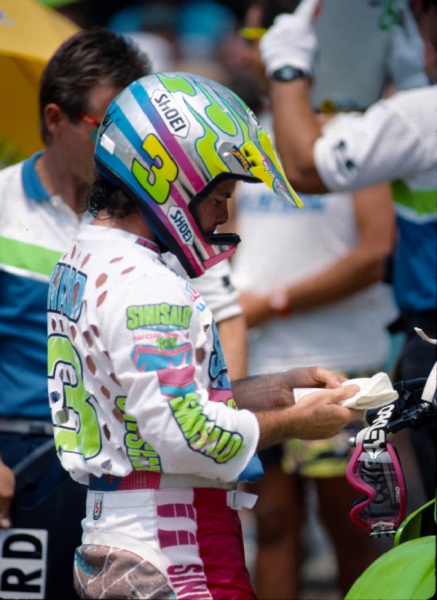 Sweeney–“Jeff Ward, Southwick 1991. News flash, Massachusetts is hot as balls in August and humid as well.  As you may or may not know, material technology has come a long way in the last 20 years or so.  Back in the day a somewhat heavy cotton riding jersey was the norm, and for some reason in the early 90s designers decided that a mock turtle neck would also be a benefit!

Just like cable TV has killed the art of wiggling the antennas and turning the knobs, modern materials have made the art of jersey slicing obsolete.  Wardy was a master of this art form, ventilating his jerseys with a razor, (remember this was the era of heavy metal dudes and dude-ettes wearing ripped everything – think Wayne’s World) so the sliced up jersey’s looked cool man!

Anyways, on this hot as balls day, Wardy who was nearing the end of a great, long career got on the box with a 3-4 moto score for 3rd overall.  Stanton took the overall with a 1-1 and JMB took second with a weird 4-2 moto score.”