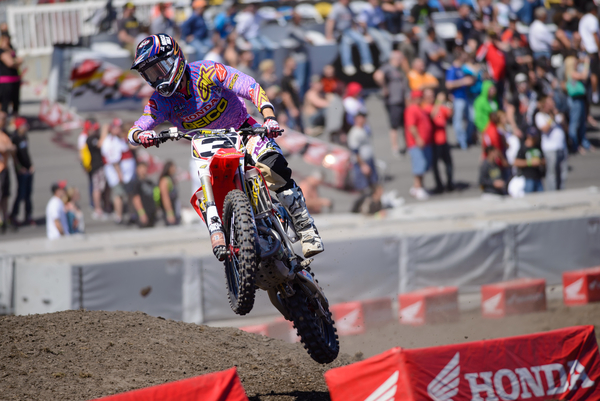 Photos By: James Lissimore
Photos By: James Lissimore
The seemingly endless season of SX the riders are presented with goes by with a lack of respect for time by all fan accounts.  Over and over we hear about how the seasoned veterans understand the highs and lows, and how to manage a season as grueling as the 17 race series they are presented with yearly.
The key it seems, is to accept whatever circumstances are presented on any given race day, and to be prepared to handle whatever task lie ahead.  Just imagine the season as a pendulum swiftly, smoothly, and without end, swaying from side to side.  It would certainly be a hypnotic effect to stare centrally at the pendulum as it gracefully moved your focus.  Looking directly straight ahead while allowing the mechanism to pass in and out of your line of sight may be the exact way to treat a season.  After all, they say it is best to never let one’s self get too high or too low in reference to circumstances.  But SX presents the most polar of situations that can only be described as the pit and the podium.  One week a rider may struggle and the next he has to be ready to fight for a podium.  The highs and lows are extreme, but every podium makes the journey consumed by the pit well worth it.
We know full well even the best of riders have their own person pits with results not quiet being where they want.  We also understand that for most other riders those results would not be considered a pit at all, but for arguments sake we are using the golden standard of the podium and all other finishes remain in the pit.  Maybe the starkest example of this feast or famine situation this year is Eli Tomac.  He has been hurt off and on; he has suffered from a lack of race time, and a lack of experience up front in heat races, as well as main events.  No matter the projections prior to the season his season has been all pit and one podium.  He spent all his energy and time working towards a goal much bigger than a single podium, but as of right now that is the only signal fire of life in an otherwise dead season.  Tomac has the tools he needs to put together a solid season with many podium finishes yet the pendulum swings and in the pit he stays.
Two riders that may have approached the season with the exact same goals have definitely experienced two completely different outcomes.  Those two riders are the starkly contrasted Kenny Roczen and Justin Barcia.  Kenny started the season with focus and a definitive strategy that helped him maintain a veteran like composure for the first 10 races.  The opposing side of the spectrum we now find Barcia and his slow rise toward the podium.  Once considered the most potent threat to Villopoto’s four-peat chances, Barcia now is finding some redemption in three straight trips to the stairs.  It is hard to see the same rider when you look at them now in comparison to the beginning of the season.  Ironically, they are probably finishing about where we predicted they would at the season opener.  One surpassed expectations from day one where the other found the pit consuming for much of the season.  The reversal of roles puts on display the swinging of the season and how arduous the task of being competitive at the front of the pack at every race is.
The funny thing about the pit is how the effect of it can snowball into a season long drag for the riders.  It is as if the harder they try to get to the podium the more they are held into the pit.  Yet with one little bit of luck the podium is found and the season is no longer a wash.  The rider now has a bench mark of what seemed to work for them, and no matter how weird or irrational the scenario might have been to help them achieve that podium, it has now become a beacon of light to guide them back.  The rider that has earned that beacon of hope this season is Justin Brayton.  He legitimately placed himself a half second away from a first career SX win early in the season before succumbing to the pit.  It was a rough season for the number 10, but that lone race podium, coupled with two heat race wins, give him a positive to focus squarely on as the pendulum sways in the background.
It is clear to us all that the 17 race series is grueling and extremely difficult to navigate without swimming in the pit too often.  Only the very best can spend weekend after weekend on the podium.  The key to any champion is limiting the mistakes and finding a way to let the pendulum swing without getting caught up in it.  For everyone not named Villopoto that has been an impossible task.  Roczen was able to for a little over half the season, Dungey has been very unlike himself this year, and Stewart could no right for three straight weeks.  All of which lead to a big lead for the number 1 and it appears this year being on the podium in general will outweigh being the rider with the most wins.  The pit and the podium are concepts that every rider of any caliber must face, and it appears it does not become any easier to navigate with speed and experience.  So enjoy the season long swinging of riders and how they find their groove and lose it…it is the only storyline still moving nearly.

Swizcorner - Seattle "What's Up with Dean?"