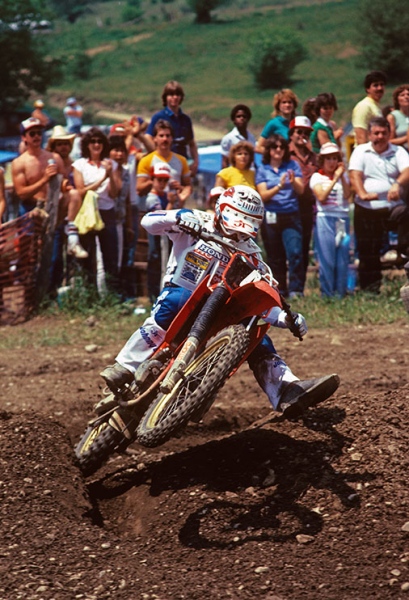 Johnny O’Mara, some Buckley photos and a story

Johnny O’Mara, some Buckley photos and a story

Buckley- “This is a shot of Johnny O’Mara at Binghamton in 1983. That was maybe the best summer of 125cc motocross ever. Besides Johnny O there was Ron Lechien, Jeff Ward and Mark Barnett and all of them could win on any given Sunday. This was just a regular left-hand turn until they put in that hump right in the middle of it that’s what caused Johnny to wheelie through the turn making this awesome photo possible. It ran as a full-page photo in Dirt Bike or Motocross Action magazine (can’t remember which one). Fast forward to March 1984 Daytona I’m walking past the Dirt Shirt trailer and what photo is on the shirt for the Supercross? This one of Johnny O! I was kind of thrilled and mad at the same time. Thrilled to see my shirt I photo on the Daytona shirt for the first time but mad because the guys at Dirt Shirts just used it without even asking. We were able to work out a deal I think I got some shirts as well as some cash.”

Buckley- “The shot of Johnny O is from the same time at the same track this one shot at Binghamton in 1985 is one I chose because it’s my favorite sounding two-stroke. The 1985 Honda RC 250s were the last works bikes raced in America. And I think it’s a combination of the pipe material, the silencer, the engine tuning and the way Johnny rode it but I just loved the sound of these things. Especially during practice when Johnny would be just putting around the track scoping things out and decide to do one of the doubles and triples out there it just whacked the throttle and the thing would just bark. That sound was so good and I love to have a race with the gate full of 1985 works bikes again. I think I’d even pay to go to that one.”