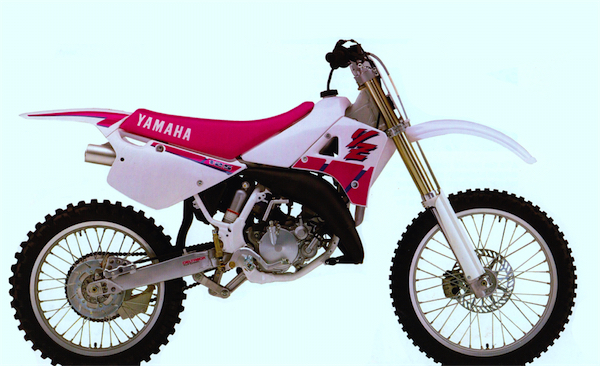 In 1991, Yamaha was one of the hottest brands in motocross. After a rough spell in the early 80’s, the tuning fork brand came roaring back in the latter part of the decade with sexy designs and solid performance. Although the glory days of Glover and Hannah were in the past, a bright new future was on the horizon with the arrival of the most highly-touted amateur the sport had ever seen, Damon Bradshaw. Bradshaw turned pro full time in 1989 and immediately served notice that all that hype had been fully justified. The rookie took the sport by storm with blazing speed and a flashy style that electrified fans from coast to coast. With new and much improved bikes in the stable, and the hottest prospect in the sport under their tent, the nineties looked to be shaping up for return to glory for Yamaha.

For 1991, Yamaha looked to capitalize on their momentum with an all-new YZ125. In 1990, The YZ had been a solid performer, but no stand-out in any one category.  Its power was punchy, but short on breadth and its chassis was stable, but less accurate than the competition. It was competitive and a far cry from the dark days of the early 80’s, but no superstar.

For 1991, Yamaha went whole-hog on the new YZ. An all-new frame was spec’d and bolted to new suspension front and rear.  New bodywork was designed and painted a bright new coat of magenta unlike anything previously seen from conservative Yamaha. Perhaps most important (and certainly most concerning to longtime Yamaha owners), was the YZ’s new power plant, which received a major overhaul for 1991. In the 125 class, power was everything, and if the YZ was going to finally win back the class title, the new motor had to be good.

For 1991, Yamaha looked at the punchy, midrange motors they had been producing since 1986, and tried to broaden that power out across the rev band. It was no secret that every manufacturer (and virtually every rider) craved the endless rev and top-end pull of the Honda CR125R, and Yamaha wanted some of those accolades for ’91. In pursuit of that top-end power, Yamaha revamped the port timing, reshaped the intake and exhaust ports, spec’d a new YVPS valve, bolted on a new pipe and installed a new ignition in their 124.8cc case-reed mill. Rounding out the motor changes was a new “ratchet-type” shifter that aimed to finally fix the YZ’s shifting woes.

So was the ’91 YZ125 mill the high-rpm powerhouse so longed for by Yamaha aficionados? In a word, no. In fact, the ’91 mill turned out to be an unmitigated disaster. In their effort to elongate the YZ’s midrange only powerband, the engineers killed its one defining trait. The new pink Yammer no longer barked to attention and exploded out of turns. Now it groaned under a load and wheezed down the straights. Low-end was never a YZ virtue, but the new motor was a bottomless pit of bog out of the hole. The previously meaty midrange was nonexistent and followed by a pathetic pull on top. This was by far the slowest YZ125 motor since the dark days of 1985 and virtually worthless as a racing motor. Adding to the YZ pilot’s woes was a notchy and recalcitrant transmission that still refused to be shifted under a load. When you considered the fact that the anemic YZ was likely to be kept at full throttle at all times, you could see the potential problem this could cause.

In an attempt to find the missing ponies, Yamaha was quick to make some Wrench Report recommendations. Apparently, some of the stock bike’s midrange malady was due to reed flutter and the hot set-up was add a second set of reeds cut in half over the stock peddles to stiffen them up. They also recommended leaning out the pilot to crispin up the boggy low-end response. The last Band-Aid fix was to swap out the new two-stage Power-Valve governor for the single-stage unit used on the ’90 YZ. If you made all these mods, the YZ perked up in the low-end and midrange, but still lacked any sort of top-end pull. If the track was hard-pack and smooth, the YZ could be ridden competitively by leaving it pinned and rowing the notchy gearbox at a lighting pace. If, however, the track was loamy, sandy or hilly, you were going to be eaten up by the red, yellow and green competition.

While the motor on the ’91 YZ125 turned out to be a massive disappointment, the rest of the bike was a solid package. The new frame was stiffer and combined with a new “Deltabox” rear swingarm and beefy 43mm inverted forks to give the new YZ a very solid and flex-free feel. Turning was greatly improved over the slightly inaccurate ’90 model, while maintaining the excellent stability Yamaha was known for. It was not as sharp as the Ginsu-like Honda and Suzuki, but more agile than the big-feeling Kawasaki. If  the track was fast and rough, there was no better mount than the YZ, as it could be bombed through terrain that would have a Honda or Suzuki pilot chanting Hail Marys. This of course was a good thing, because if you ever actually slowed down on the YZ, you were in for a world of hurt trying to get back up to speed.

In the suspension department, Yamaha once again outperformed their pathetic motor by a wide margin. The new “works-type” 43mm inverted cartridge forks were 2mm larger than the year before and featured both compression and rebound damping adjustability. Performance was very good, with decently plush action and well sorted spring rates. Overall feel was not as plush as the Kawasaki’s excellent silverware, but it was in the ballpark for most riders.

Out back, a new “Deltabox” swingarm was mated to a redesigned Monocross linkage and new Kayaba rear shock. The new swingarm was reportedly both lighter and more rigid than the outgoing “box-section” design and devised from Yamaha’s road race technology. The new linkage was designed to provide a more progressive action and improved feel on Supercross style obstacles. Like the forks, the shock did an admirable job of taming the track. Action was plush, well sorted and a significant improvement over the year before. Bottoming control was very good and most riders found the bike easy to dial in with compression and rebound adjustments. Again, it was not quite as plush as the excellent Kawasaki, but it was certainly raceable in stock condition.

Detail-wise, the new magenta YZ125 was at the upper end of the ’91 pack. Reliability was far better than the KX and RM, but not quite as stone-axe reliable as the Honda CR. Braking was much improved for ’91, with better feel and none of the squeaking, grabbing and chirping that annoyed riders in ’90.  Cool details like the integrated bike handholds made lifting the YZ a breeze and the swoopy new plastic freshened the bike’s appearance. While certainly a bold departure, most people actually liked the new magenta look and preferred it to the old bike’s rather stale appearance (and hideous red anodized forks). In the ’91 appearance sweepstakes, the pink YZ actually looked conservative compared to the tiger-striped Honda and Rorschach-testSuzuki.Ironically, the most sedate looking bike of ’91 turned out to be the Kawasaki, which only a year previous had looked like a Buck Rogers space bike. The ‘90s were a strange time indeed…

In 1991, Yamaha shot for the moon with their 125, but ended up burning up on re-entry.  The new-look YZ featured a very old-look powerband that harkened back to the dark days of the early eighties. It was a bike improved immensely in every category, save one. Unfortunately, that one deficit was a non-starter for most 125 hot-shoes. Without the ponies to run up front, the YZ was doomed to once again be the runt of the 125 class. With major motor work, the little Yammer could fly, but in stock condition, it was a bird with a bum wing.