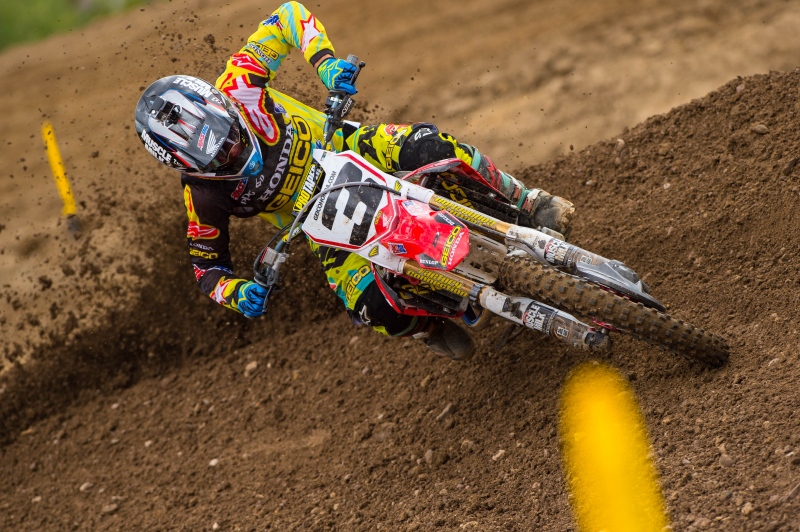 1- Wow. Eli Tomac…we knew he would be good but this good?

There aren’t much things to say about his performance but say it was one of the most dominant win in the history. He was 2.9sec faster than second fastest, Dungey, in practice. He won by 22 seconds in the first moto and was 1.5sec faster than RD on the fastest lap. In moto 2, he crossed the finish line 1’31” before Dungey and was 5.4sec faster on their fastest lap… Add to that, 11 of Eli’s 15 timed laps in moto 2 were faster than Dungey’s fastest lap. That’s total domination. His riding was aggressive but not as much as we’ve seen from him in the past. His lines choices were good but he used this difficult Hangtown track like a big playground. You could see him play with the bumps, jump them like a rhythm sections and also, wheelied a lot of stuff on the track.

Obviously his fitness is already up to par. But even with this amazing performance and killing the competition, Dungey, who will be his main competition for the title, only lost 6 points. Those guys aren’t racing the Tour de France. If you win by 1 second or 1 minute, you only gain 3 points on second place. That’s something Dungey is well aware of it. We all know Ryan is maybe one of the most consistent rider in the history of the sport. In 2014, on 24 motos, he was off the podium only 3 times with 2 4th places and a 9th in the mud in Indiana…

2- Jeremy Martin and Marvin Musquin were pretty equal in the race, what did you see between them?

They both scored the same amount of points but I think Jeremy was a little better in Hangtown… Martin took a while to get going in the beginning of the first moto. It took him 12 laps to get in the top 3. When you have Musquin in front, it’s pretty much impossible to win. An interesting stat, when Jeremy passed Webb in the 15th and second to last lap of the first race, he almost matched his fastest lap time of lap 4… It proves us that he tried to catch Marvin but also that he’s ready physically. With Webb being over a moto down in the championship and with a bad ankle and the field not being close to JM and MM level, it will be between those 2 guys for the Championship.

I also thought Martin’s Yamaha was set up better than Marvin’s KTM. In the beginning of the first moto, Musquin struggled with lines because his bike set up wasn’t very good. I guess they changed his bike drastically (which he said on TV) and had to get used to it. On the other hand, Jeremy’s bike, especially in moto 2, looked very good. You could see him charge hard in the downhill and the bike being very stable. That could be a key for the race in Glen Helen. Bike set up is very important on that track.

3- Kenny Roczen’s back is giving him problems, his first and second moto performances were a lot different. What kind of moto scores would he need to get to keep putting him out there and not just benching him?

Add RD’s points difference with Roczen today (26) to 475, we get 501. Statistically, Roczen would have to score more than 501 points in the next 11 races to “beat” Dungey in the championship. That’s more than 45.5 points a race. That’s a better score than a 1-3 or 3-1 at every single race. And I am not counting Tomac which is the guy with the best form today. Knowing this, what would you do? Still race and hope for a podium, at best, at the end of the season (if RD and ET don’t get hurt nor blow a couple engines) or heal, turn the 2015 page and come back when you’re 100% healthy and 100% prepared to compete at your best level…

Tomac’s domination was kind of a surprise. Going 1-1 for his isn’t a big surprise but the way he did it was. Anderson’s podium was a half surprise too. First MX race in 450 and first podium just like in Supercross. I’ll add another surprise, the top 10 of Noren and Nicoletti. There are a few riders behind them in the overall standings than you would thought would be in front of those 2 guys. So good job to Fred and Phil.  In 250s, the top 5 other than Martin and Musquin is a surprise to me. Aldredge rode over an hour without cartwheeling which is amazing considering what he got us used to it in SX. Privateer A.Martin almost got an overall podium finish and Alex Rodriguez completes the top 5. I can think of a handful of guys that, on paper, could/should be in the top 5.

5- Weston Peick’s performances from one moto to the next were quite different thanks to a suspension change…did you notice anything out there?

In the first moto, I thought Weston faded bad after halfway. Pretty much the way he did in SX actually. But in motocross, it’s usually way more noticeable. I guess it wasn’t fitness related because he actually rode pretty consistent in moto 2 with a podium finish and the best JGR finish… I actually watched the second motos again after I got these questions and tried to look at Weston’s suspension in moto 2. I didn’t think it was that good actually. I thought the balance was off, low in the front and high in the back in the breaking bumps. The forks look very, very soft for him. It’s the first race of the MX season and the bikes will evolve a lot from what we saw Saturday.

Hangtown was the real first test. Everyone will go back to work now and try to fix what needs to be fixed. Some will still struggle for a few races, some will be good to go at Glen Helen. It’s always like that and it’s interesting to see how the team’s react after the first MX race. I picked Weston to get 3rd in my fantasy league last weekend and I was bummed out he let me down in the first moto! With the momentum from his good SX season, I think Weston has something to say in this MX season. He just needs to keep working on his fitness, you can never be fit enough, and work on the bike set up. It’s his first year on the Yamaha and that bike is a little different to set up outdoors. It takes a little time to figure it out.

6- What did you think of the track?

I thought the track was very rough for a first race and a one day format. It seems like since we went to the one day format, the tracks weren’t getting that rough. But, Saturday, Hangtown looked very rough and difficult. It was bumpy with a lot of ruts! It’s also why we saw so much gap between riders. If the track wasn’t as rough, Eli wouldn’t have been able to be 5 seconds faster than Dungey in second moto. I don’t think anyone rode nor practiced on a MX track as rough as Hangtown between Vegas and Saturday. Most of the bikes weren’t ready for those conditions. Ironically, the 2 winners had the best looking bikes on the track Saturday. I actually don’t think it’s a coincidence, I think Eli and Jeremy were the riders that actually adapt themselves the best by attacking the track. The faster you go the more your bike is stable in bumps and ruts. Too many guys weren’t committing enough.

The perfect example is the ruts before the uphill rollers. The guys that were on it in them were fine. If you were going thru them halfway committed, you were very slow or crashing. Glen Helen will be another tough track. You know those guys building and preparing the track love to see the riders suffer and they love having 25 ruts everywhere even if only one is the faster. Glen Helen is the most one lined track on earth with the most ruts in the corners…