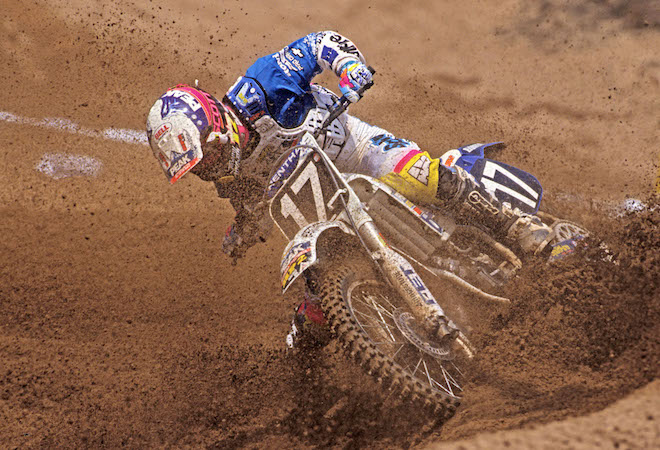 With Moto-X 338 track making its triumphant return to the AMA schedule for 2016, I thought this might be a great time to look back at one of the many amazing Paul Buckley pics from this venue.

With Moto-X 338 track making its triumphant return to the AMA schedule for 2016, I thought this might be a great time to look back at one of the many amazing Paul Buckley pics from this venue.

This shot is from the 1992 running of the Southwick National and it depicts the winningest Supercross rider of all time eating a mouthful of New England’s best terra firma on his Peak Pro Circuit CR125R.

Blazier: In 1992, Jeremy McGrath was far from the motocross icon he would become a few years later. Signed by Mitch Payton’s new Peak sponsored Honda team in 1991, Jeremy was a talented kid, but no amateur superstar. His résumé lacked the accomplishments of motocross prodigies like Damon Bradshaw, Buddy Antunez, or his eventual 1991 Pro Circuit teammate, Brian Swink. He was raw and inexperienced, but obviously in possession of impressive natural ability. A win at Las Vegas in 1990, had opened the eyes of many, including seven-time AMA champion Ricky Johnson, who championed the Honda brass on hiring the relatively unknown Team Green kid from Sun City, California.

Originally lined up for the Factory Honda squad, Jeremy was moved to Payton’s fledgling Pro Circuit team when the decision was made to farm out their 125 effort for 1991. Paired with Brian Swink, Jeromy Buehl and Steve Lamson, the new team was set to ride Pro Circuit tuned CR125R’s in Supercross and Nationals. Wearing identical AXO gear and aboard striking blue and white Honda’s, the new team was the talk of the industry in 1991.

That first year, the new Peak team captured both the 125 East and West Supercross titles with Brian Swink and Jeremy McGrath at the controls. In the outdoors, it was Swink who shined brightest with a double moto win a High Point and another moto win at Washougal (finishing second overall). In the final outdoor standings, the Peak team would secure fourth, fifth and sixth place finishes with Swink, McGrath and Lamson trailing eventual podium finishers Mike Kiedrowski, Guy Cooper and Jeff Emig.

For 1992, Brian Swink would take his Supercross number one plate and join fellow Peak teammate Steve Lamson on the Factory Suzuki squad. This would leave McGrath as the undisputed top dog of the Peak squad. He would be joined that second year by former mini-cycle superstar Buddy Antunez, the Muddy Creek Assassin, Mike Brown (yes, that Mike Brown, did this guy race with Moses?) and returning Ohio speedster Jeromy Buehl.

In Supercross, Jeremy would back up his 1991 title with another dominating championship run. He would win seven out of the eight races (losing only at Houston to former teammate Swink) on his way to a staggering fifty point gap over second place finisher Antunez. At the Gatorback season opener in March (which actually took place in the middle of the SX season in 1992), McGrath would take is Peak Pro Circuit CR125R to solid five-six moto finishes for fifth place overall. Nearly two months later in May, the riders would return to the outdoors for round two of the series at the historic Moto-X 338 track in Southwick, MA.

On the National schedule since 1976, Southwick was a staple of the Motocross series and renowned both for its demanding natural terrain and propensity to favor local talent. Its ever shifting sands and endlessly rough whoops made for a true test of both a rider’s fitness and his ability to read its always changing track conditions. Because of this, it was typically the tougher and fitter riders that shined in Southwick’s sand box. Hammer heads like Rick Johnson and Jeff Stanton were perfect for Moto-X 338’s demanding conditions and they dominated the race through the late eighties and early nineties.

Because of this, it came as a bit of a shock when the guy pulling out to a lead in the first 125 Southwick moto of 1992 was none other than the Supercross specialist himself, Jeremy McGrath. Jeremy pulled a solid start and took over the lead on the second lap. From there, he kept his head down and just kept pouring it on. By lap six, he had five seconds on local hero Doug Henry, and by the 25 minute mark, MC had pulled than out to a full fifteen second lead. At the end, he would roost away unchallenged to his first ever moto win.

Asked by Cycle News at the time about his first moto win, even Jeremy himself acknowledged his improbable victory, “I figured if I rode smooth, I’d finish pretty good. I started pulling away and was pretty surprised I didn’t get tired.”  In the second moto, that lack of fitness would catch up with Jeremy and a sixth would be the best he could muster in the Southwick sand.

While the sixth in the moto two cost Jeremy the overall win, his surprising first moto victory showed that he did indeed have the speed to run up front outdoors. His fourth overall at Moto-X 337 would prove to be his best finish of the series, as a late season slump would see him take double-digit finishes at Troy, Broome-Tioga and Steel City. His eighth overall in the final standing was certainly not enough to silence his many outdoor critics, but his two 125 Supercross titles were sufficient to earn MC a trip to the Factory Honda rig for the 1993 season. A year later, he would be the AMA 250 Supercross champ, and three years later, he would complete his rise from relative moto obscurity to the greatest rider in the sport with a dominating title sweep of the 1995 AMA Supercross and 250 National Motocross Championships. With that, the BMX loving kid from Southern California could officially tell all his critics to pound (Southwick) sand once and for all.

What about you Matthes, do you have any thoughts on this little remembered, but important moment in motocross history?

Matthes:  I think this was a pretty small moto win in terms of Jeremy McGrath’s career but it indicates the future potential of the SX king. After all, not many people mistook MC for an outdoor warrior (one OA 125 national win in his three year mx career) but this win showed…something. As did his first moto win at Gainesville ’93 in the 125 class. McGrath’s was always an amazing rider of course but it just took him buckling down and focusing a bit more on the nationals to show that he could be champion. I mean, c’mon, who can go and beat Doug Henry at Southwick in ’92? Sure he got a bit tired in the second moto but to do it once means you can do it again. Unless it’s a mud race and your name is Ricky Ryan I suppose.

This photo is also significent because of the number. #17 wasn’t run by MC much. Everyone knows he started off as #125, everyone knows that he ran #15 in his rookie year in the 250 class and other than that, the dude was #1 or #2 the entire rest of the way. He ran #3 for a year outdoors, #17 in this photo annnnddd that’s about it. This photo could give you a nice trivia answer with your buddies at some point.

The Worst Part of the Year