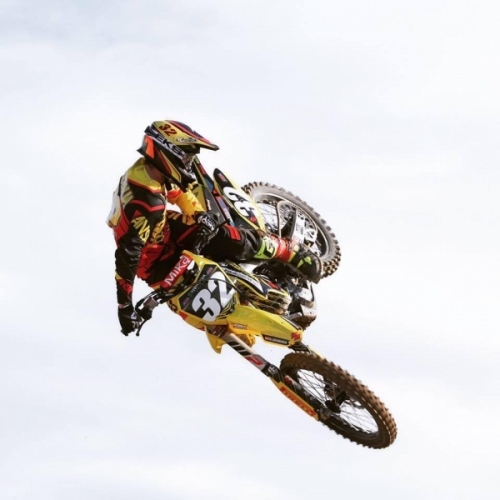 Why isn’t anyone talking about Matt Bisceglia?

Why isn’t anyone talking about Matt Bisceglia?

I didn’t want to quote Katy Perry for the title of this feature, but yeah I guess I have to because Matt Bisceglia is “coming at you as a dark horse”. “Sigh” I went there bro and I apologize to everyone for having to go through that.

Now that’s out of the way we can focus on Dirt Candy Graphics/MAD Racing/Yoshimura Suzuki’s Bisceglia. Literally no one has been talking about this guy so I called him up personally to find out why that is. I’ll let him explain what he’s been through in this offseason with his transition from GEICO Honda to his new squad and the injuries he’s had in the process.

Bisceglia is a guy who has a ton of potential and a personality to match. When he starts doing well this weekend just please acknowledge that I told you so.

Also: He’s got a new move that he’s supposedly been working on when he wins. Will he bust that new maneuver out in Atlanta this weekend? We’ll have to wait and see… #Ginobili

Pulpmx: I feel like you’re being overlooked for the upcoming 250SX East Region and I can’t figure out exactly why that is. Is that sort of your plan?Bisceglia: Yeah I know! It is what it is, you know? I’ve had a couple of injuries and things not go my way but I’m moving forward. I have been under the radar in signing with this new team, but it’s actually going really well. I’m very happy with my equipment right now. We are at a place where I really didn’t think we would get to right now. I’ve never felt more comfortable on a bike. I definitely think coming into this weekend we’ll open some eyes. It should be good man. I’m looking forward to some solid finishes.

Obviously last year at GEICO Honda was a bit up and down for you. What did you learn from last season that you really applied to your program in the offseason?
Last year, despite the injuries that I had, the time that I had on the bike was spent very wisely. I was just doing what I needed to do and I worked on what I needed to work on. Last year I had some standout rides and I had some bad luck. I had to deal with a couple of little injuries that I didn’t really make public. I learned quite a bit last year, so I’ll be ready.

Let’s touch on a recent injury you had. You broke your collarbone not to long ago, correct?
Yeah, we were out at the practice track and had a little malfunction with a part. It was over a step on and step off and I lost the drive off of it. I hit the landing and I broke my collarbone. It’s weird, it was two months to the day that I broke the collarbone on my other side. I’ve had a little bit of some rough luck. With this second collarbone injury I had it plated and I was riding a week after surgery. It wasn’t too bad of a recovery. The plate is stronger than the bone, so you just have to wait for it to heal a little bit and then you can ride again. I’m very happy with where I’m at considering the crazy events that have happened in the offseason.

It’s crazy what technology can do in this day in age. Riding a week after surgery sounds too good to be true.
I know. Like I said, the time I had on the bike beforehand was good. Even since then, in the last four weeks, our bikes have come so far. We have our race setup ready to go and I’m very happy with my machine. I just need to go out there and put Suzuki’s 250 team back on the map. That’s what is going to be cool about it.

I was going to touch on that next. Despite Suzuki’s efforts to bring back their 250 program it’s been riddled with injuries so far. You get to be the light for them that leads them out of darkness.
The team has had a rough start unfortunately. My teammates have had some injuries , but that is part of it. We’re just going to leave that all behind us. Our equipment so much farther ahead of what it was a few months ago. It’s crazy how far it’s come in the development. It’s a good program and we’re looking forward to a successful last part of the year.

We have a tight knit group of people. It’s not an uptite environment and that’s what is cool about it. Everybody gets along really well. Rob (Lind) our team manager has done a lot of races the past few years. He knows what to expect come race time. It helps having somebody like him involved in our program. All of the mechanics on our team, the sponsors that support us, we all just get along. We have a unique relationship with all of the sponsors and we work closely with them. I’m able to give good feedback as far as testing and I try to get along with everyone. I couldn’t be happier with the group of people I’m surrounded by.

I did see a photo of the bike on Instagram. I want one for myself because that is one good looking piece of machinery.
Yeah, that’s what you get when you have Dirt Candy Graphics as a title sponsor. Blake over there does an amazing job. He makes our bikes look good. I think we have the best looking bikes at the track.

From an outsider’s standpoint, this is really your year to contend for podiums and race wins. This is the year you start winning races and showing what you can do as far as contending for titles.
I definitely agree. I feel very comfortable with everything we have going on. It’s going to be good. I think this can be a standout season for me as far as consistent finishes.

What is the key to racing such a short series in 2016?
Definitely it’s minimizing mistakes. Last year I had a lot of good points, but I also had a lot of mistakes. I definitely do believe that in the past couple months that I have been able to minimize those mistakes. I worked really hard on being a solid rider and worked on my starts. I got some pretty good starts last year, but I also threw some good starts away. Just minimizing mistakes is going to be the difference this year.

With the East Coast we really don’t really know what to expect. In the West Region we kind of knew going in that Cooper was going to be the favorite. There will be a lot of guys wanting to make a good impression at the first round.
The West Coast we knew what to expect, but with the East Coast it’s going ot be really tough this year. I think a lot of the focus will be on the contenders like Justin Hill, Malcolm Stewart, and Aaron Plessinger. Those three will be the title contenders from people looking in on the series. That’s fine with me man. I’m coming in under the radar, which is cool. I’m just looking forward to getting out there and surprising some people with my new ride. I’m confident and I know what we are capable of in the team, equipment-wise, fitness-wise, and ability-wise. I know what I’m capable of.

Those guys that you mentioned as the title contenders, two of the three have had problems with consistency in the past. Consistency is key.
Yeah, I had a concussion in the middle of the supercross season last year and I had another little injury before the second half. That’s a part of it. I can’t get any DNFs or miss any rounds. I have ot be towards the front every week.

Let’s go back in time a little bit. You’ve come a long way from riding in the pick-up truck with your dad trying to figure out if you could even make it to the next amateur national. You won clutch titles at Loretta Lynn’s, which led to your GEICO Honda ride. You’ve been underrated the majority of your career.
It’s been a long road to here. It’s funny I see a lot of people online say negative things about me, the majority of it’s good things though. The negative ones you just have to laugh at. People have no idea where I’ve come from and what I’ve gone through to get to this point, especially the struggles in the past couple of years that I’ve had. I’ve worked so hard to get to this point. I feel like this could be a breakthrough year for me.

You had that Road to Loretta’s segment that aired on TV around a very crucial point in your amateur career. That showed just a little glimpse of what you went through.
That was a cool deal. Shoot, that was five years ago now, but like you said that showed a tiny sliver of what I had to go through that year in particular. It’s all worth it in the end. I’m definitely living my dream and loving what I’m doing. It’s rad.

What do you want to say to your fans for the upcoming season? Or do you want to just let your riding do the talking?
I truly appreciate the fan base that I have. It’s definitely cool to see how many people support me. People who I don’t even know want to see me do well. It’s cool. I really want to go out this year and give my fans something to be happy about. I want to get some wins, podiums, and really good finishes. I want to give them something to cheer about.

Thanks for reading my column. If you’d like to chat about Bisceglia, the #Ginobili, or anything else you can email me at Troy@pulpmx.com.