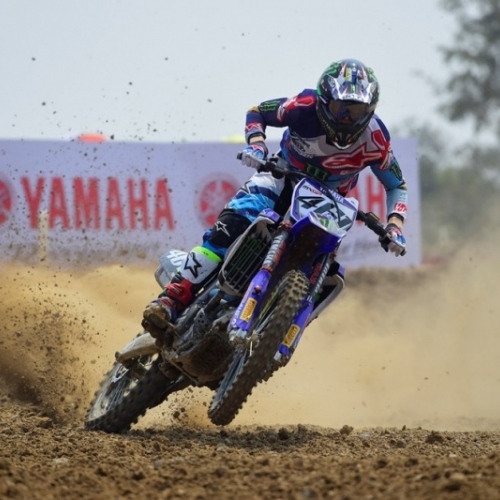 Febvre and Herlings unstoppable in Thailand!

Febvre and Herlings unstoppable in Thailand!

Romain Febvre defied the heat to put on a dominating performance in Thailand to not only win the GP but take the red plate, signifying the championship leader.

Febvre was not happy with his performance in Qatar and really asserted his authority on the field in Thailand. Febvre won an epic battle with Antonio Cairoli and Tim Gajser in race one but was absolutely exhausted at the finish after the best race of the season so far.

Race two was easier after Cairoli stalled and Gajser got a bad start allowing the Frenchman to control the race. Fevre now has a six point lead over Gajser in the championship.

Febvre said: “I’m really happy to take the red plate, but you know it’sstill a really long season ahead. It’s really nice to have it, but there are still 16 rounds to go.”

Tim Gajser was second overall and was very much in the battle for the win in race one until a mistake after passing Cairoli (with a cheeky brake check) relegated Gajser back to third and he wisely settled for his position. A bad start in race two limited Gajser to fifth but it was a big improvement over last year after the Honda man collapsed in the heat.

Jeremy Van Horebeek looks to be back to his 2014 form with his consistency already shining through and allowing him to get on the podium already this season. A fourth and fifth in the heat that he admits he just can’t adjust too is an encouraging result for the Belgian who seems much more relaxed this year than in 2015.

Evgeny Bobryshev was fourth overall and is an impressive third in the championship. Bobby was happy with his results after admitting he finds the heat tough and couldn’t find his flow on the tricky circuit.

Antonio Cairoli looked back on form in race one and pushed Febvre all the way for the win, a holeshot in race two looked as if it would set Cairoli up perfectly for going for the overall victory but Cairoli’s bike stalled in the middle of the first turn and the Italian had to come from last to 12th  position. It cost him a lot of points in the championship and is 28 points down to Febvre already. Cairoli will be ready to claw back some points in Valkenswaard you can be sure of that!

Cairoli said: “I had a big holeshot in the second race but then the bike kept stopping for one and a half laps and I had to start from the back to ride 3-4 laps a bit aggressive. After the problem disappeared I tried to push a bit but I get tired if I don’t ride with my rhythm and style. I was no further back than 12th but for sure that was not what I expected. Top five was my goal for both motos.

Shaun Simpson continued his good start to the season with sixth overall again but once more Gautier Paulin struggled. The Frenchman had a bad start in race one and got knocked off while fifth on lap one in race two and he is very frustrated at his results so far, not surprisingly as he is eleventh in the championship and 55 points off the championship leader, Febvre.

Paulin though is trying to remain positive: “I’m putting in so much effort and so is the team, so things like this are frustrating, but I know where I’m at, I keep a good mind, and we move on to the next round.”

Ben Townley was the big story of the weekend after he took an emotional win in the qualifier then said in the press conference he was disappointed the first two events. Townley did admit he liked the technical track in Thailand but wasn’t a fan of the isolated location.

BT ran with the Febvre, Carioli,Gajser trio for a long time in race one before highsiding in the waves section and being forced to DNF with a broken radiator. Race two was more like it and Townley secured second place with a solid ride. But he was left frustrated with his first race mistake saying, “I blew it,” in standard honest fashion from the Kiwi.

In MX2 the big news was Dylan Ferrandis dislocating his shoulder in Saturday’s qualifying race. The Frenchman who had been fastest in timed practice was running fifth after a bad start and managed to dislocate his shoulder in the waves section without even crashing! Ferrandis flew straight home to France and will try and be back for the next round in Holland at the end of the month.

Annoyingly for the fans, Ferrandis was the only rider who can seemingly run with Herlings which essentially gave Herlings absolutely no competition in Thailand.

The Dutchman cruised to both moto wins and when he looks at two MX2 riders he beat, leading the championship in MXGP, you have to wonder how much he regrets his choice to stay in MX2. The fear from the outside is that Herlings is learning nothing in MX2 while his former competitors from MX2 are getting faster and faster in MXGP and learning every race!

Jeremy Seewer is the revelation of the first two rounds, second overall, his best result ever in MX2 has set the Swiss talent up for a very good season. Everts has got Seewer to be more aggressive and he really seems to be starting to believe in his own talent.

With Ferrandis injured it could be down to Anstie and Seewer to step up and give Herlings some competition but it is unlikely to happen at the round three in Valkenswaard. The Dutchman has never lost a moto there, not even Roczen or Musquin could get close to Herlings at the famous venue and if Jeffrey wins he will have won a remarkable 50 GPs at 21 years of age!