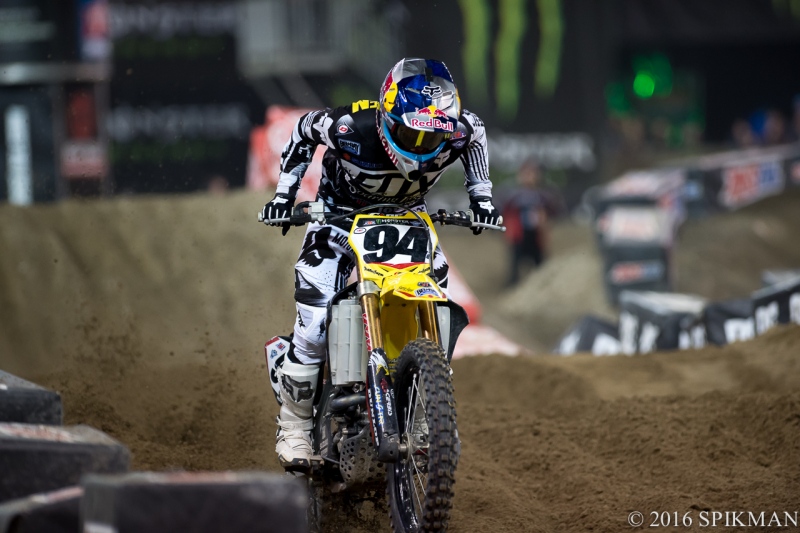 The main event featured some good racing early on between Roczen, Dungey and Tomac…what did you see from those guys?

After the chaos of the lap with Bogle’s crash, it was good for us, the fans, to have those 3 guys in the top 3 spots. Tomac looked good but Roczen took the lead early. Ken rode very well, fast and smooth. He’s looking more and more like A1 ’15 where I thought he looked the best ever. For the top guys, the difference between winning and struggling is very small. I just watched the race again. You can notice how well Ken was going the turns and also how well he anticipated the track. You have to always think about where to put your wheels to get ready for the next obstacle or next turns. That’s where Tomac has been struggling. More on that later.

Dungey didn’t look as comfortable as we are used to seeing him this season. He struggled a bit in the whoops. His entrance speed wasn’t good enough which made him hit them with the rear wheel too low. Roczen was very good in that area. Getting in them fast and staying higher. It took 2 passes for Dungey to make it stick with Tomac. That’s when he lost a bit of ground on Roczen. We didn’t see it on TV but he fell later, “giving” the 2nd position to Marvin. As far as the championship goes, Dungey is obviously in control but Roczen’s confidence is building up. It might be a little too late unless something big happens to Ryan.

The Tomac question…won his heat, faded to fifth in the main. He says his heart rate spiked early in the main and he just couldn’t get it back down. What did you see?

What I see is what I’ve been saying since Anaheim 1 about Tomac. Unlike Roczen, Eli doesn’t put his wheels where he should and he doesn’t corner well. He hasn’t cornered well all season. The issue is where he puts himself on the track. You could see him doing his “2016 signature move”, which was entering tight in turns, locking the rear wheel and too much stop and go. For example, the whoop sections before the finish. He skimmed them all the way to the right but there was a 180-degree right turn after. He couldn’t come in any tighter than he was doing. When you put yourself in that position, 1-you can’t roll your turn and keep your momentum, 2-you have to lock the rear brake to turn. You can’t go fast like that. It’s why Seely gained so much time on him at the end of the main. In other sections, it was the same thing for Eli. In the rhythm sections, he was staying too much in the middle of the track making his turns after also too tight. If you look at the guys that rode well and finish strong, on the last jump of the rhythm section, they all the way right if there’s a left turn after or all the left if it’s a right turn.

You HAVE to enter the berms/bowls EARLY which opens your turns and puts you in position to roll your turns. By doing so, you don’t have to brake as much and you pretty much just have to lean your bike and keep your flow. Eli isn’t doing that. Dropping from first to fifth doesn’t look good for Eli and most people might think he had issues. But I really think it’s so easy to fix. As easy as moving away a few feet in the entrance of the turns and telling him that his rear brake is his worst enemy. It kills me to see how obvious his problems are and how easy they are to fix but I haven’t seen a improvement since the first year.

Just like with Short a few weeks ago, we saw a big crash when Justin Bogle got nuts in the first rhythm off the start. Is there something that can be done to keep it safer there or is it the job of of the racers to be more responsible?

I was really excited about the track when I caught the practices online in the afternoon. I liked the fact that the rhythm section jumps were steeper and close together. I think the tracks are too mellow and forgiving in SX these days. It levels the field way too much. If the track was very generic like we’ve been seeing, Malcolm and J-Mart wouldn’t have been able to pass that many guys after a first turn crash in the main. As for Bogle and as he said on TV, it is 100% his fault. He over jumped the first triple and got out of control in the next one. There’s nothing we can do and nothing we should do to fix this. Riders have to be challenged by the tracks and be precise. And if you’re not precise, there has to be consequences. If it doesn’t it means the tracks are too “soft”. It’s SX people. I like to see Tomac or Dungey miss a rhythm section like this weekend. It means it’s challenging. Too many tracks this season were too forgiving and even if you were coming up short or long you were able to jump the next obstacle.

Marvin is, like, very legit dude now. Crazy how much his season has turned around from the beginning. There were big whoops there (although they were knocked down for night show) and he handled them pretty well.

Like I said after the Dallas SX where Marvin crashed in the first turn and came back to 6th, I believe that race was a confidence booster and an eye opener for Marvin. That night he finally knew he had the potential to run up front with the best guys. He’s been up there since then. Whoops might have been big in practice in Toronto but not during the night show. When you see guys dripping in them and jumping them, they aren’t very difficult. The first set looked a bit cupped out in the main but they weren’t that bad. Even if we have big whoops in practice, we know they’re gonna be reshaped and rolled for the night program. They always do that now. It wasn’t the case in our days but it is now. To answer your statement, I don’t think Marvin is doing well because of the whoops. I actually thought that’s the section he wasn’t great in Toronto. But he was good the rest of the track keep his momentum and anticipating the track well kinda like I stated earlier about Roczen

That 250 Main was crazy, thoughts on that and also should Plessinger be upset with Mookie for his move off the start in the heat…what’s the edict there?

The 250 main was pretty crazy. You’re gonna have crazy races and crashes if they keep building short starts. On shorts starts, too many people get in the first turn at the same time. There isn’t time for riders to spread out which results in first turn pile up. You never see that on a 100 yard start. As far as Mookie moving over bad at the start of the heat race, it wasn’t very cool of him to do so. Not sure if he did that on purpose or not but it’s dangerous. I thought he lined up pretty wide for having a good gate pick so he had to move over to defend the inside. But you do that when you have a bad pick and you’re not able to line up close to the best spots. Kinda like you would do in a main event if you get a good jump but had to go to the LCQ to make it in.

The Marty Davalos situation is unfortunate for him and the team. Thoughts on this?

I obviously don’t know the whole story. What I think I know is that he’s been here forever. He has to know when your a foreigner you have to take care of your papers. I know that, I’m French. You know that, you’re Canadian. I believe he’s also married to an American citizen, isn’t he? If he is, why doesn’t he have a temporary green card? Also, all the riders and their brothers have agents. That’s a job of an agent to make sure their riders are taken care of if the riders can’t take care of themselves. At one point, they have to stop looking for free headphones and socks and make sure their riders have everything they need to go racing… This story, as well as CP’s because he might have the same problem, is unacceptable. Unacceptable from the rider, from the team, from the riders entourage and it shows you that we really need to improve in a lot of areas in our sport. I never saw Tony Parker not being able to go kick the Raptors’ butts in Toronto because of a visa problem…