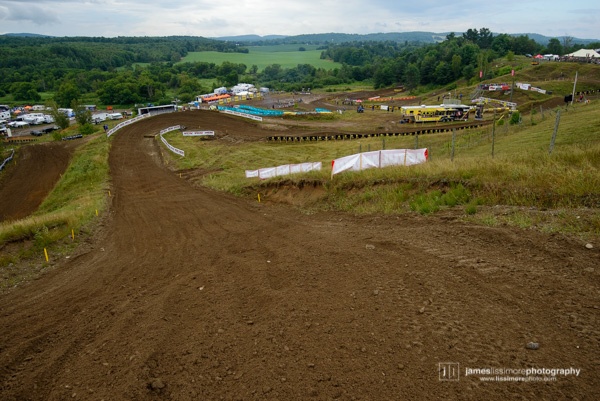 This week, the Rockstar Energy Drink Canadian Motocross Nationals made their way to the French speaking province of Quebec and one of the best tracks on the National circuit – the Ulverton track, just south of Drummondville. The Ulverton track is the closest in layout to an AMA circuit, with lots of elevation, sandyish soil and great scenery. It’s always one of the top stops of the year. Plus, the French language lends a bit of a European feel to the stop so it makes for a pretty unique weekend.

Rain showers in the morning led the way to sunny skies and warm temps by the time the motos came around and we were treated to great racing in both classes. It was an all out war in MX2, with riders Dakota Alix, Dylan Wright, Shawn Maffenbeier and Cole Thompson all taking turns leading but as has become the norm this year in the Canadian Nationals, it wouldn’t be without controversy, as double moto winner, Thompson, saw his second moto win relegated to a fourth place finish when it was determined he cut the track. The penalty allowed Dylan Wright to take his first ever overall victory.

In MX1, Davi Millsaps early season dominance has subsided since a practice crash during the break left him unable to properly prepare for the Eastern swing of the series. In moto one, a lead was slowly chipped away by Matt Goerke before an uncharacteristic mistake allowed Georke by to take the win. In moto two, Millsaps never really got going and struggling to hold on with blisters, the points leader could only muster an 8th place finish.

Let’s take a look at what went down at Ulverton…