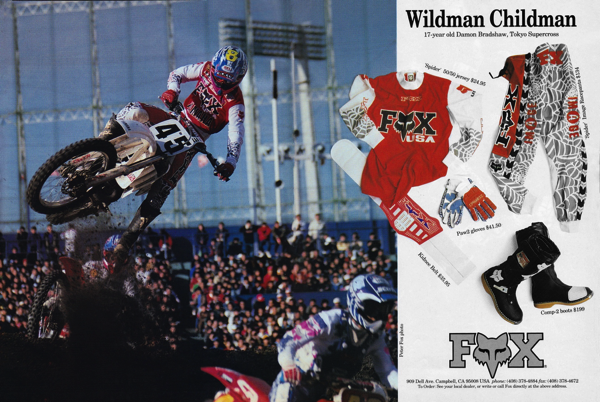 For this edition of Moto Gear History, we are going to look back at Fox Racing in the decade of the nineties.

For this edition of Moto Gear History, we are going to look back at Fox Racing in the decade of the nineties.

Joining me in this look down memory lane will be two of the men who were instrumental in Fox’s meteoric growth during this decade: John and Greg Fox. These two, along with their brother Pete and sister Anna, formed the nucleus of the Fox brand in the nineties. As their father Geoff moved away from running the day-to-day business, all the Fox children moved into more prominent roles at the company.

John would helm Fox’s new video division, while Greg would focus on sales and distribution. Pete continued his role as head designer and Anna headed the call center and quality control departments. Together, these four Fox children would shepherd the company into the new millennium.

At the start of 1990s, Fox was on a major hot streak. During the latter part of the previous decade, they had made major strides toward supplanting JT Racing as motocross’ “it” brand. The charisma of Ricky Johnson, combined with the inspired designs of Pete Fox, had turned the once staid company into a motocross trendsetter. Innovative designs, exotic prints, and ground-breaking ad strategies had all combined to put Fox at the forefront of motocross mindshare.

By 1990, Ricky Johnson had moved on, but Fox remained in the limelight with a stable full of young up-and-coming talent. Damon Bradshaw, Jeff Matiasevich, Ronnie Tichenor and Larry Ward (a mid-season addition) headed up a youth movement that looked to be supplanting the old guard of motocross. These wild young kids rode aggressively on the track and proved a perfect match to Fox’s avant-garde gear designs. Zebras, spiders, bones and barbed-wire would all make an appearance in the early nineties, and who better to market it than this youth gone wild?

While Fox would begin the decade in a great position, the nineties would not be without their challenges. Increased competition from brands like AXO Sport would mean a massive escalation in rider salaries and the departure of some of their most-celebrated riders. As always, however, competition improves the breed, and Fox would bounce back from these minor setbacks to do some of their best work in the nineties.

Overall, the decade would be a great era for motocross and great time for Fox. The popularity of home video, mainstream TV coverage, and the emergence of stars like Jeremy McGrath would all help thrust motocross and Fox into the mainstream. The iconic Fox head logo, once a secret code to other motocross enthusiasts, would eventually become a common sighting at malls across America. While some “core” fans would lament this expansion into the civilian population, there can be little doubt it was a great move for Fox.

Today, you can find the Fox logo on everything from Star Wars merchandise to Wheaties boxes. To many outside the motocross bubble, Fox Racing is more than a gear company; it is a lifestyle brand that appeals both to its core audience and a new generation – a generation that knows Fox more for their stylish tank-tops than their kidney belts. To them, the Fox head logo means more than motocross; it means cool, and that is something every one of us who grew up worshiping Ricky Johnson, Mark Barnett or Ricky Carmichael can relate to.

If you would like to read more about Answer Racing, you can check out our look back at them HERE  and  HERE

If JT Racing is more your speed, you can read all about their rise and fall HERE  and HERE