The early nineties were a unique era for motocross. For the first few decades of the sport here in America, it seemed that its potential for growth was unlimited. Riding areas (legal and otherwise) were plentiful, bikes were inexpensive and America had not yet discovered the internet, PlayStation, or helicopter parenting. In short, it was a great time to be a kid and a really great time to be a motorcycle enthusiast.

Today, the looks of the 1992 RMs are appreciated for their kitschy nineties appeal, but when they were introduced, their aesthetics were far from a home run.

During these halcyon days of moto, it was not uncommon for a manufacturer to completely redesign one of their bikes after only a single year on the market. That would be unthinkable in today’s decade-long run of Suzukis, but in the eighties, it was not uncommon to see a manufacturer introduce a new machine, only to completely scrap the design a year later.

While the intensive pace of innovation was great for consumers (unless of course, you were stuck on a now obsolete two-year-old machine), it was unsustainable for the manufactures. Even at its peak, motocross was a niche sport and the cost of completely redesigning an entire line of motorcycles almost yearly was difficult to justify to the corporate bean counters. When you added in a series of recessions in Japan and the skyrocketing value of the Yen, it became clear that the crazy pace of innovation of the eighties was going to have to give way to a more sustainable business model in the nineties. 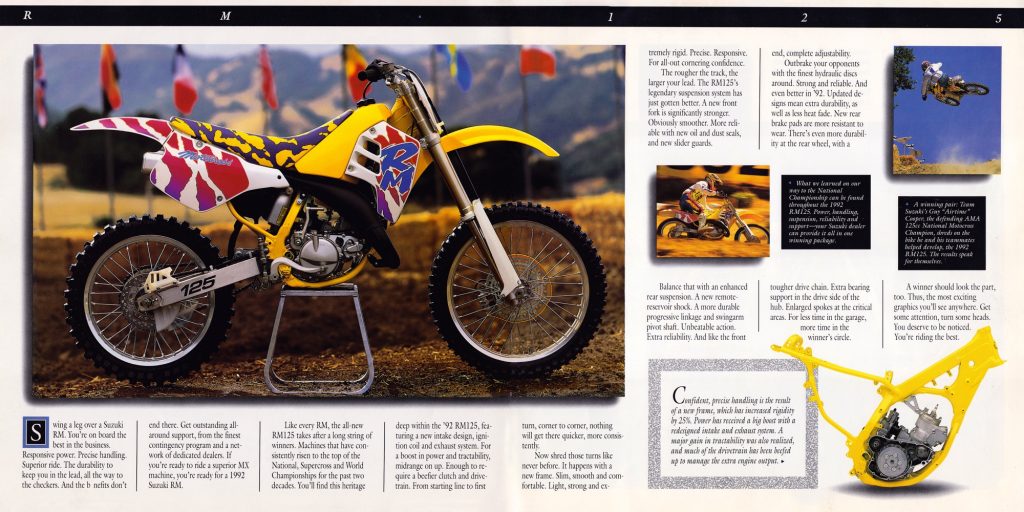 The 1992 RM125 was the most significantly changed model in the Suzuki lineup. Substantial motor, frame and bodywork updates added up to what many believed was the best 125 of 1992.

Faced with an unfavorable exchange rate, reduced sales and a dwindling research budget, the manufacturers turned to styling to move the needle in the early nineties. At first, this took the form of a splash of color here-and-there and maybe a slightly bolder font on the shroud decal. Subtle cues that were enough to signal that you bought the new one. Within a few years though, that had ramped up to the point where Hondas were pink, Yamahas were magenta (also sort of pink) and Suzukis were…well…a rainbow unicorn. 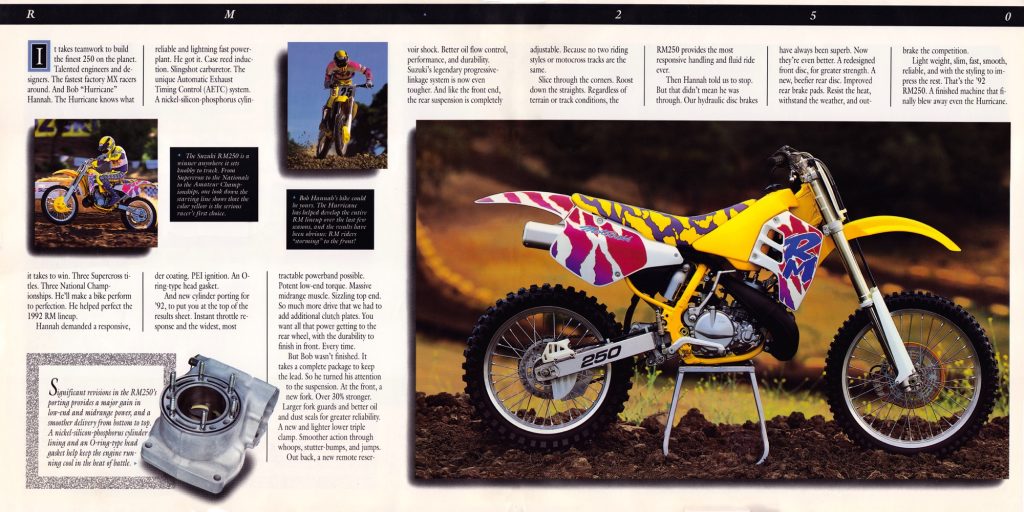 In the early nineties, Suzuki’s RM250s were not nearly as successful as their 125 siblings.

Of all the bikes from this crazy era of styling over substance, none of them captured the period better than the 1992 Suzuki RMs. Redesigned in 1989; the RMs had gone from the ugliest bikes on the track to some of the most beautiful. Clean, crisply styled and modern, the new RMs were the epitome of late-eighties motocross styling. In 1991, that styling had taken a bizarre turn with a switch from blue to yellow for the frame and the introduction of a big splash of color to the graphics. The seat was now a weird combination of gray and yellow and that made it look more like it had been sprayed with contact cleaner than any intentional styling choice.  I was different, bold and certainly enough to show your friends you were not still stuck on that crusty old ’90 model. 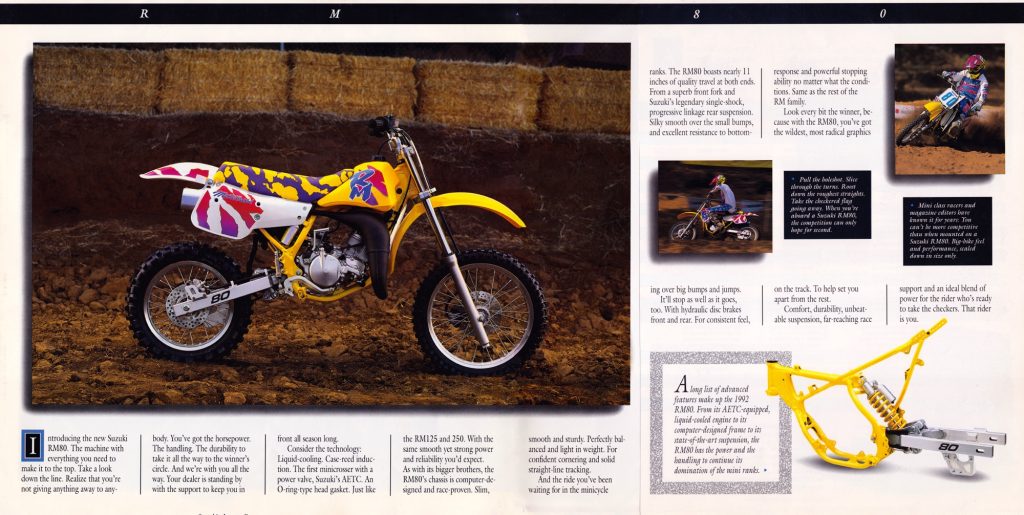 With its potent power-valved motor, the RM80 was one of the best mini-class racers of 1992.

In 1992, Suzuki took that to ELEVEN with the introduction of the radically restyled new RMs. Gone was the gray splotchy seat, to be replaced with a…purple splotchy seat! The plastic and frame remained mostly yellow, with white being retained for the shroud and number plates (in the USA at least, other markets kept the plastic all yellow). As in 1991, the graphics also covered the side plates, an unfortunate choice that led many spodes to drive scorers crazy by just sticking the numbers on over-top of the graphics. Upping the ante over ’91 were the new graphics, which came in retina-searing hues and carried on past the plates onto the rear fender. Overall, the new look was a kaleidoscope of colors that looked more appropriate to an Elton John concert than a motocross track. While too bold for many, it was certainly effective at making that tired old ’91 look like yesterday’s news.

In 1993, Suzuki stepped back from the precipice of styling insanity with an all-new and far more understated line of RMs. While probably not as beautifully styled as the ’89-’90 RMs, they were far less controversial than their zebra-striped predecessors. 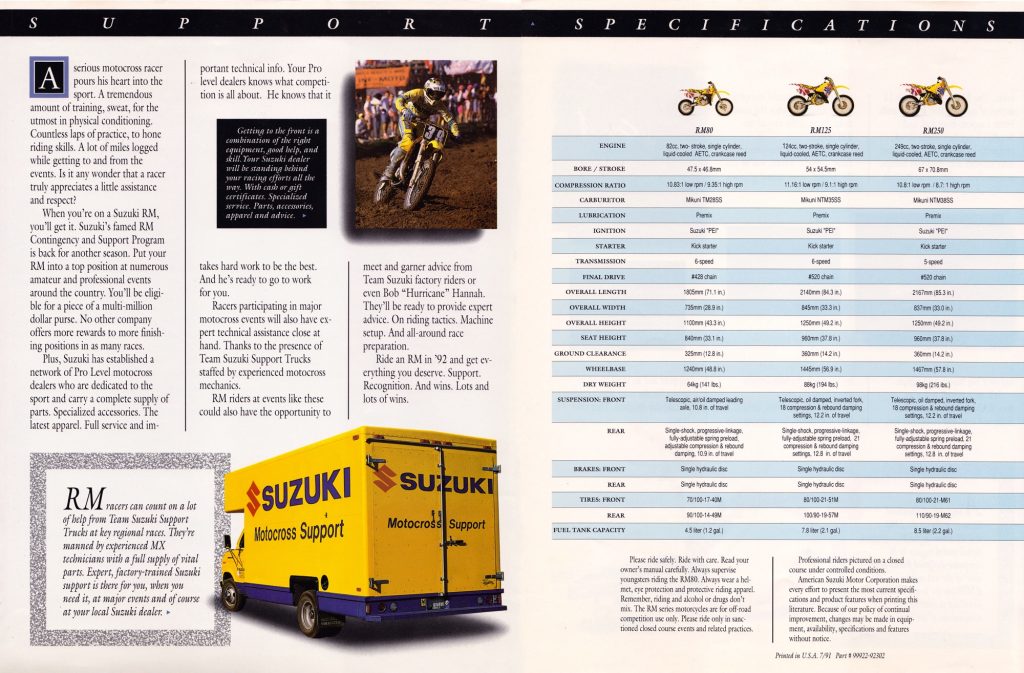 Ah, the days of box vans and contingency money…

Today, the 1992 Suzuki RMs stand as the pinnacle of early-nineties Japanese moto styling excess. Nothing before or since has come close to topping its pure styling audacity. Love them, or hate them, the ’92 RMs stand as a fascinating window into one of the most significant transition points in the history of our sport.