I recently got a chance to ride the new 2020 Kawasaki KX250 at the legendary Castillo Ranch and wanted to give you ten key points on Team Green’s new quarter liter four stroke from the first day of testing. If you want to learn more about all the changes Kawasaki made to the 2020 click here: https://www.keeferinctesting.com/latest-news-1/2019/6/18/kawasaki-introduces-updated-2020-kx250. I will be doing more back to back 2019/2020 testing next week so follow @keeferinctesting on Instagram to read more interesting tidbits. 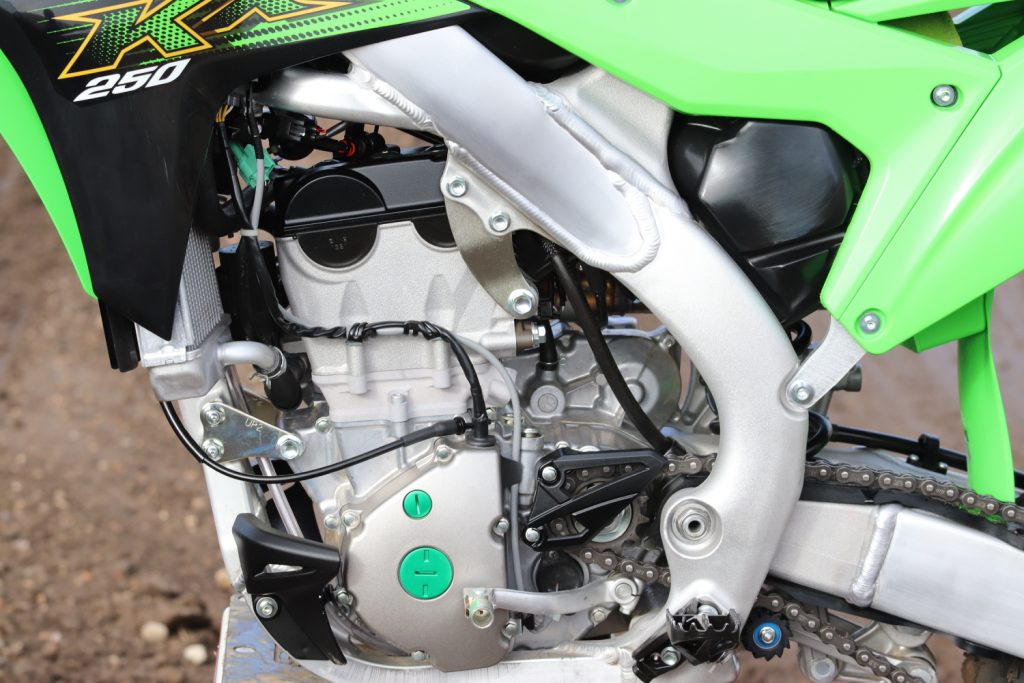 Engine: Kawasaki’s engineers focused on creating more mid to top end power on the 2020 KX250 and that is exactly what they did. I wasn’t allowed to ride our 2019 test bike to compare back to back on this day (it’s a KHI thing), but I have brushed up on the 2019 KX250 enough this past week to let you guys know that it does have way more engine RPM recovery than the 2019. Bottom end feels about the same as the 2019 with that snappy out of the hole excitement, but the mid range pulling power is improved along with a healthier top end stretch that allows the rider to use fourth gear more than the 2019. Over-rev is also improved for 2020 especially in third and fourth gears where you need have the KX pull you down long straights. I also noticed that the changes that Kawasaki’s engineers made in 2020, the small bore four stroke has less engine braking than last year’s model, which makes the KX250 feel more playful. Transmission spacing is a little different feeling in 2020 (nothing has changed with gear ratios, but with the different engine specs this can happen) as the second to third gear gap is wide and the third to fourth gear gap is much closer, so sometimes bypassing third gear and going straight to fourth gear works best on longer straights. I will be messing with some gearing in the future so stay tuned to see if we can get second to third gears closer together in order to get third gear more useable around the track.

Couplers: The 2020 Kawasaki KX250 comes standard with a green coupler that provides the engine delivery we described to you above, but if you’re looking for more power everywhere with slightly less rear wheel connection than install the white coupler. The white coupler makes the KX250 feel lighter and gets better throttle response with increased mid to top end pull. Over-rev wasn’t sacrificed with the white coupler (over green), but you will get less connectivity from the rear wheel on hard pack conditions. If you’re on a loamy or sandy surface the white coupler is a noticeable change for the better in power delivery. I tried the black coupler thinking it was going to hurt overall power output, but it only affected the low end delivery (over green/stock), and gave the KX250 so much more rear wheel traction in our afternoon test sessions. Try the black coupler if you’re looking for some traction on hard pack, it works very well. The black coupler will make the KX250 feel slightly heavier yet more planted around the track. 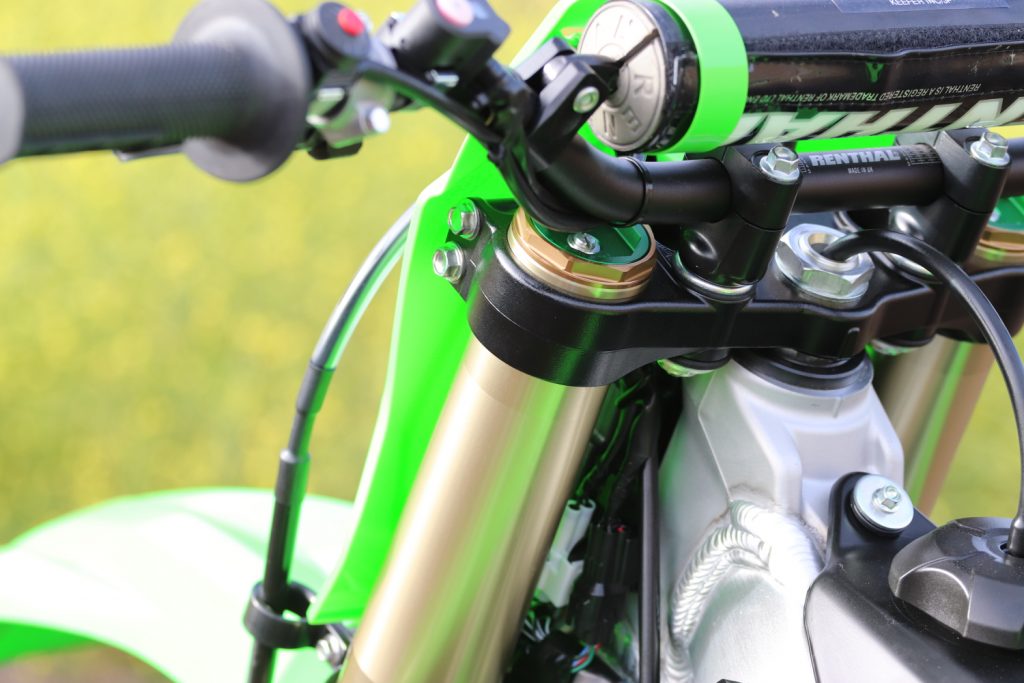 Fork: Thank you Kawasaki for getting rid of that horrible Showa SFF fork! The KYB dual spring fork is a welcome change and gives the rider increased comfort in 2019. The overall action of the KYB fork is soft for my 170 pound frame, but a couple clicks stiffer on the compression helped hold up on de-cel. Going stiffer on the fork helped the bike from pitching which led to a calmer feel driving hard into corners. The KX250 fork feels similar to the YZ250F KYB SSS fork because it moves in the stroke a lot yet has pretty damn good bottoming resistance. The Castillo Ranch track wasn’t that rough so we will get down to more suspension testing in the coming weeks. 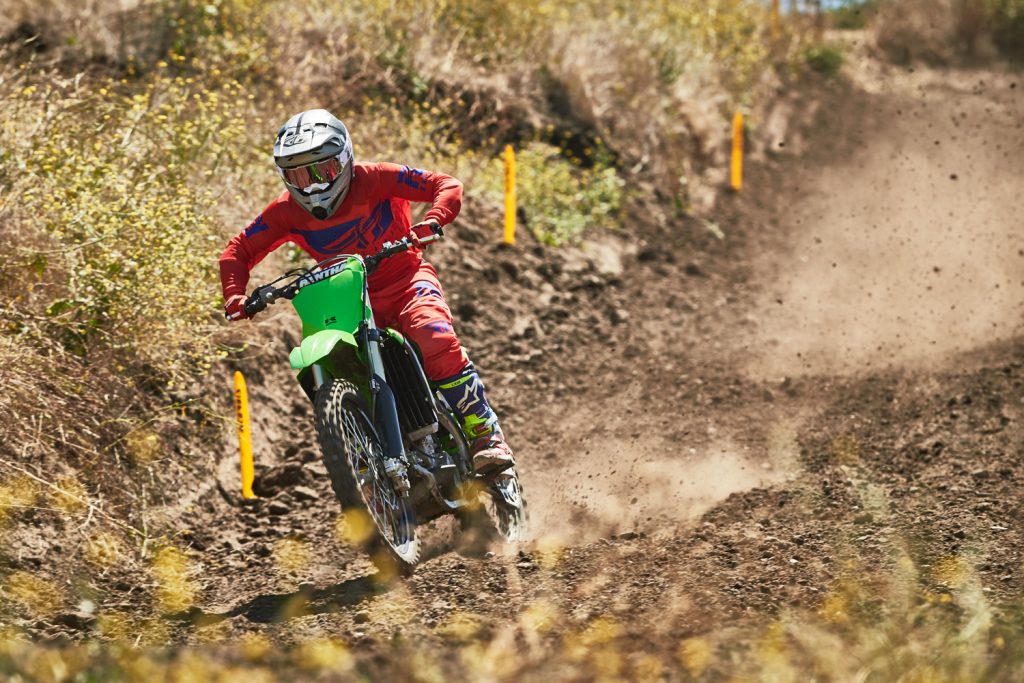 Shock: We played with a couple sag measurements and came to a good setting of 103mm that helped the balance of the KX250 under acceleration. If you feel like the rear of the KX250 is too low under acceleration and you’re getting too much side to side movement, raise the sag to 103mm and this will help rear wheel traction. Once I found a good sag setting (from 105mm to 103mm) the rear of the bike squatted nicely under acceleration chop and provided more front end bite through corners. The end stroke of the KYB shock is a little soft, so going stiffer (quarter turn on the high speed compression) helped the rear of the bike stay up on g-outs and slap down landings. 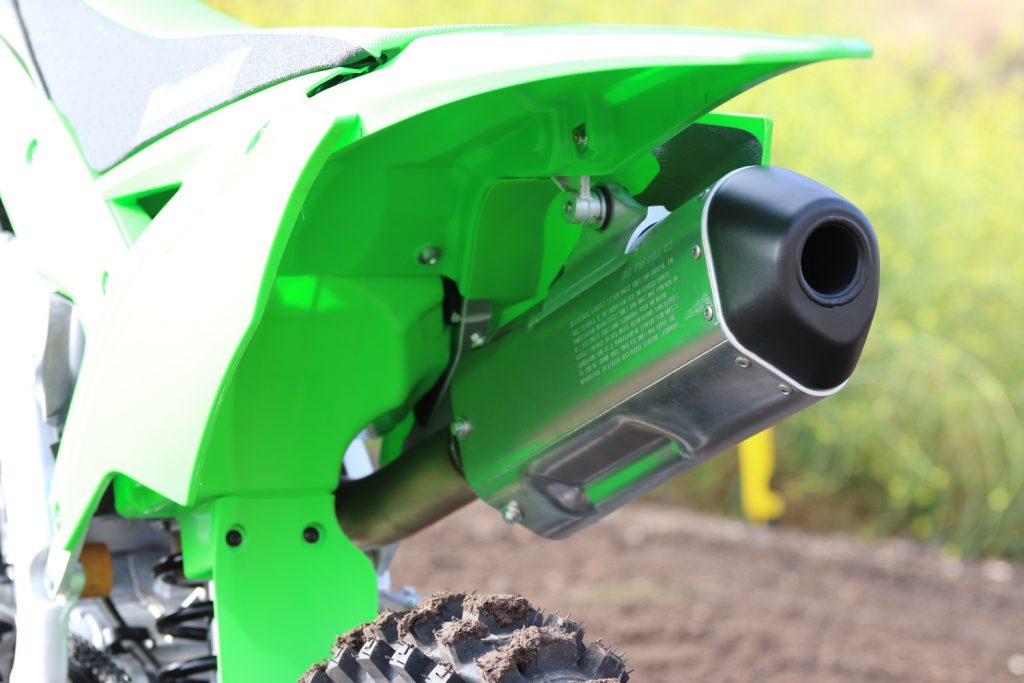 Chassis: Kawasaki didn’t focus too much on chassis updates, but the changes that Kawasaki made to the lower front engine mount bolts did help in one area. On tip in (through corners) the 2020 KX250 feels easier to start your lean, which means it feels slightly lighter, but mid corner the Kawasaki has a tendency to want to stand up. Some of that has to do with cockpit feel for me, but more on that later… Straight line stability is still superb on the Kawasaki so going fast down hills is not an issue as the Kawasaki KX250 invites you to ride it hard without feeling to sketch. Bump absorption of this frame is one of the best in class and now with the suspension changes Kawasaki made for 2020 it has helped this feel on the track even more. 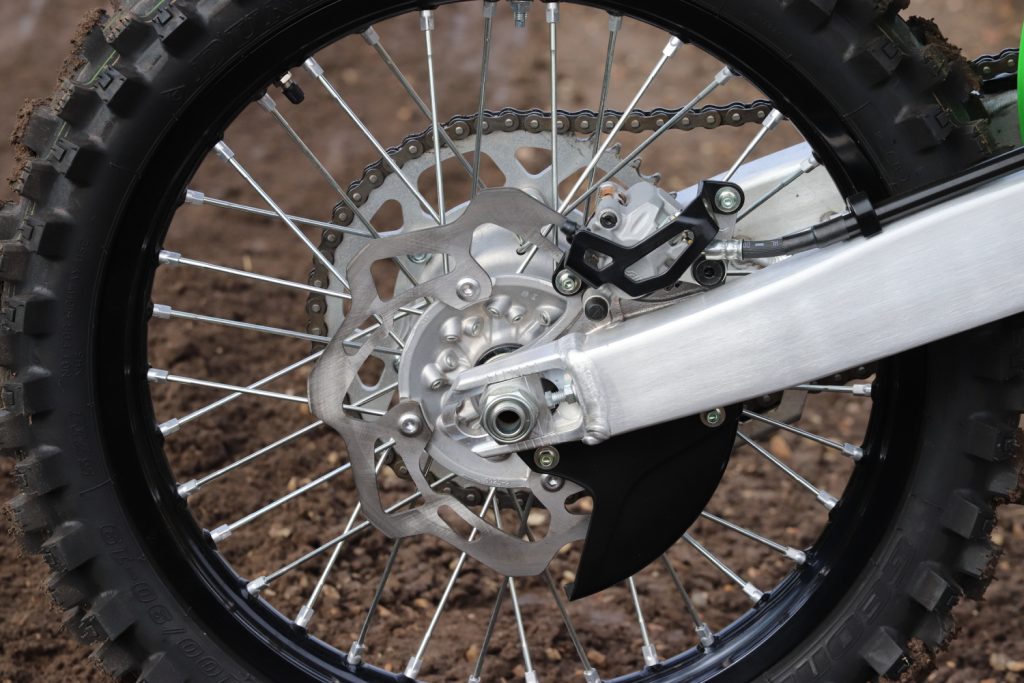 Brakes: The 270mm front brake is powerful and has a linear feel under heaving braking, which I really like. I can’t say the same thing for the 250mm rear brake as it’s grabby and hard to modulate coming into corners. If I was you I would go back to the 2019 KX250 240mm rear disc and hanger to help gain some more control coming into corners. 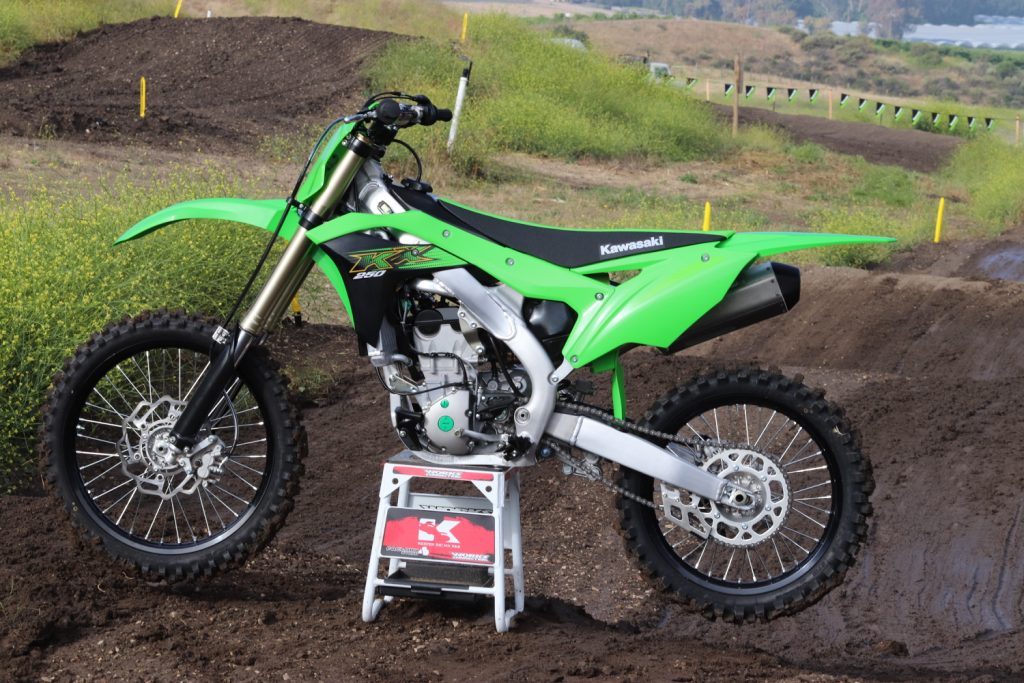 Cosmetics: What do you guys think of the all green color scheme of the new KX250? I personally like it and think it’s bright, pops, and looks like the factory bikes. I am sold!

Rider Triangle: The seat to peg to handlebar ratio is ok for my 6’0 frame, but Kawasaki needs to get a new handlebar bend. The 971 Renthal bend is too tall/wide feeling and needs to be updated. I don’t mind the 7/8 size, but when I sit down on the seat, coming into corners, it feels like my arms are way too high. This puts my body positioning in the wrong place coming into corners and makes the bike want to stand upright mid corner. Kawasaki could remedy this situation by running a 983 7/8 Renthal handlebar, which is much more neutral feeling for the rider on this bike.

Tires: Dunlop MX3S tires are still on the 2020 KX250, which means we still have front end traction and a softer carcass feel instead of having a stiffer MX33 carcass that could hurt this bike’s bump absorption feel. Don’t get too cozy though with these 3S tires because we will lose the MX3S full time come 2021. Boo!

Seat: The middle of the seat on the KX250 is soft and too squishy, which makes me sink into the bike too much when accelerating or coming into a corner. This just compounds the high handlebar feel to me so getting a firm seat foam would be crucial to help me get my body positioning correct through corners.

My overall first impression is that Kawasaki made a better KX250 by getting some added mid to top end pulling power that it needed, along with more engine RPM recovery, and increased comfort with the fork/shock. Will it be enough to bring it up near the front in the shootout rankings? Find out soon because shootouts are coming around once again. Check back to keeferinctesting.com and pulpmx.com for more updates and settings as we ride this green machine more.