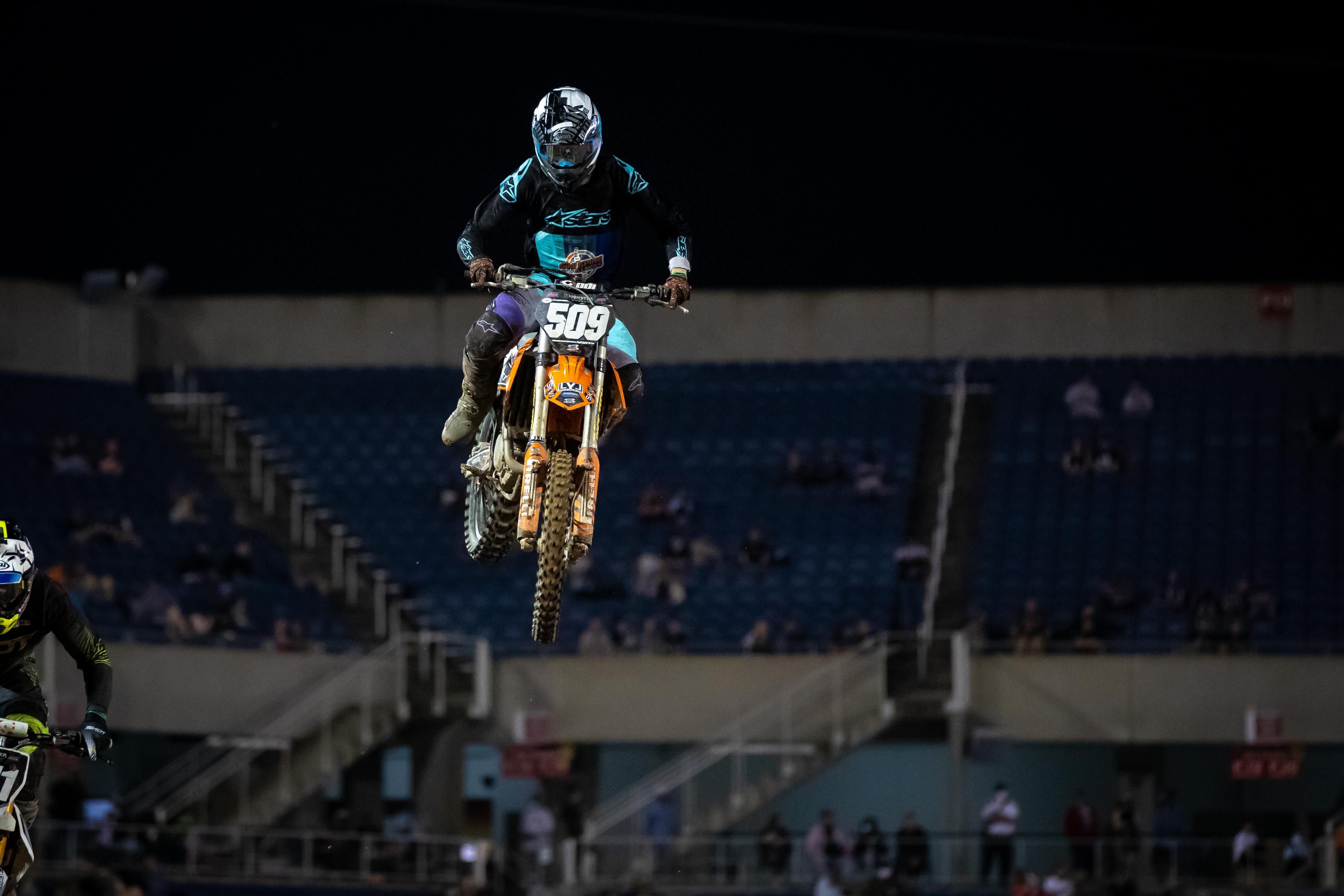 Alex Nagy: Thanks. I honestly haven’t even kept track of how many night shows, or how long. My first year of racing supercross was in 2013, and I did that on a 250. Then every year after, I’ve been in the 450 class. So this is kind of like my first time back in the 250 class. I’m glad I was finally able to capitalize on a good coast to ride and be able to put it in the main finally.

You’ve got to be stoked. You went after the guy in third, Meshey. That was sweet. You got him. You rode yourself in there. That’s a good way to do it.

I knew the person that was in fifth was coming for me. I knew that Meshey was up pretty hard. I knew that if I wanted to for sure lock it in and not have a nail-biter on the last lap, that I would have to get Meshey. So I was like, I’m going to hit the whoops as fast as I can. Once I was able to make the pass on him and then pretty much ride it in at that point, it was smooth sailing.

A couple weeks ago you were close, too. I think you were in fourth and got passed. How bummed were you for that?

Yeah. I think it was Indy 3 I was on the bubble pretty much the whole night. I think I was running tenth in the heat race, and then I think I ended it 11th. Then I was running fifth and sixth in the LCQ, and I ended up sixth. Honestly, I wasn’t too bummed about that one because I was close enough to taste it, but not close enough to think I had it. So it was kind of like a good building from it. The first Indy I felt good. I qualified I think the best I ahd on the 250 so far, and then I didn’t even make it past the second or third turn in the heat race. I was just wiped out on the ground. That completely ended that night. The second Indy I was still feeling it. I was ready to roll for the third one. Like you said, it was good but it just wasn’t good enough.

Are you going to reward yourself with a hotel tonight?

No. I’m still here in the parking lot. I’m going to spend the night here. I spent the night here last night. I spent the night in the van the night before, and I’ll probably spend the night in the van tomorrow night, too. It’s kind of funny because even at Indy I stayed in the van. I didn’t run it, didn’t use the heat in it, didn’t have a heater, nothing. I just had four sleeping bags and I just grinded it out. Honestly, it sucked. It was cold waking up in the morning. Then when you’re kind of cold and then you’ve got to put cold clothes on or cold gear on, that was rough. Like I always say, you don’t even really think about it. It’s just in the past.

Main event went good for you though, 14th. You were in the mix.

Yeah. I was pretty stoked on it. I honestly had no clue what place I was in the whole main because I’m here by myself – no mechanic, no nothing. Just grinding it out. But I knew I was not in last. I knew I was somewhat ahead. Then I kind of could tell. My goal going into it, and especially towards the end what I was pushing for was I didn’t want to get lapped. So I was pretty stoked that I just made the cut to be able to make all the laps besides the one that I was down, so that was pretty cool.

We were bugging Jericho on our group text, me, A-Ray, and Jericho, that he better not be waving you on and pay attention to his rider. But he did set your start device. He said he felt very proud.

He did. I was going to tell him, get a picture of me and Christian on the line, but I don’t think he had his phone on him. He showed big time that I didn’t want to blow it, so I was like, I’ll just leave it be. How weird is it that Christian ends up in the LCQ? He wins it, and I got third. Then we end up next to each other in the main event. It’s kind of funny how that all worked out.

He was very happy. Very proud papa there.

Yeah, he was stoked. He’s always got my back.

A-Ray and I were joking, do you think it was the ramps in the off-season or was it the sand pits that got you ready for this supercross season?

Honestly, I didn’t even have an off-season because I was in Illinois the whole time. All I did was ride. I would part my track back home, and then ride with a track that was half snow, and then two jumps of dirt. That was all I did. I wasn’t in California. This was the least prepared I’ve been going into a year, and I did the first round on a 450 and was able to get in on it which was sweet. I was stoked on that, to make the night show. Then I wanted to do a 250 the whole time, but I didn’t get the bike that I’m riding until the night that I left for Houston. So, I pretty much just had a brand-new 250. I’m like, okay, I’ll race the 450 at the first one and then switch the suspension over. I broke the bike in in the parking lot. The first time it ever saw dirt was the practice at Houston 2, which is pretty funny.

Yeah. I got the same Race Tech suspension on it that I ran the entire 2020 supercross season on. I got foot pegs and then Pirelli tires, the suspension, stock bars, stock grips, stock headers, stock clutch. The only change that I made for this one was I changed the gearing finally. I think that helped us quite a bit.

There’s one more at Salt Lake, and then the shootout.

So that will be pretty cool. I’ll look forward to that one, for sure.

That’s cool. Thank you for doing this. Congratulations. Everyone is stoked for you on Twitter and everything.

It’s funny because everyone was telling me they were going to pick me for their fantasy tonight because it was supposed to rain. Then I went out in practice and it was dry and I was almost going to text people like, “Maybe you shouldn’t pick me for your fantasy. It’ll probably blow up.” But good thing I didn’t, because I came through for it.

I think 300 people picked you or something.

Wow. So I delivered them pretty good. I’m glad I could deliver for all the people that believed in me. 118 night shows, but I finally made one.