In 1978, the Honda CR125M Elsinore was the perfect example of putting lipstick on a pig. When the smaller Elsie had made its debut for the ’74 model year it was an absolute revelation. Light, fast, well-built, and inexpensive, the CR125M set new standards for performance in the 125 class. Nearly overnight, 125 starting lines across the nation turned into a sea of silver and green CRs. 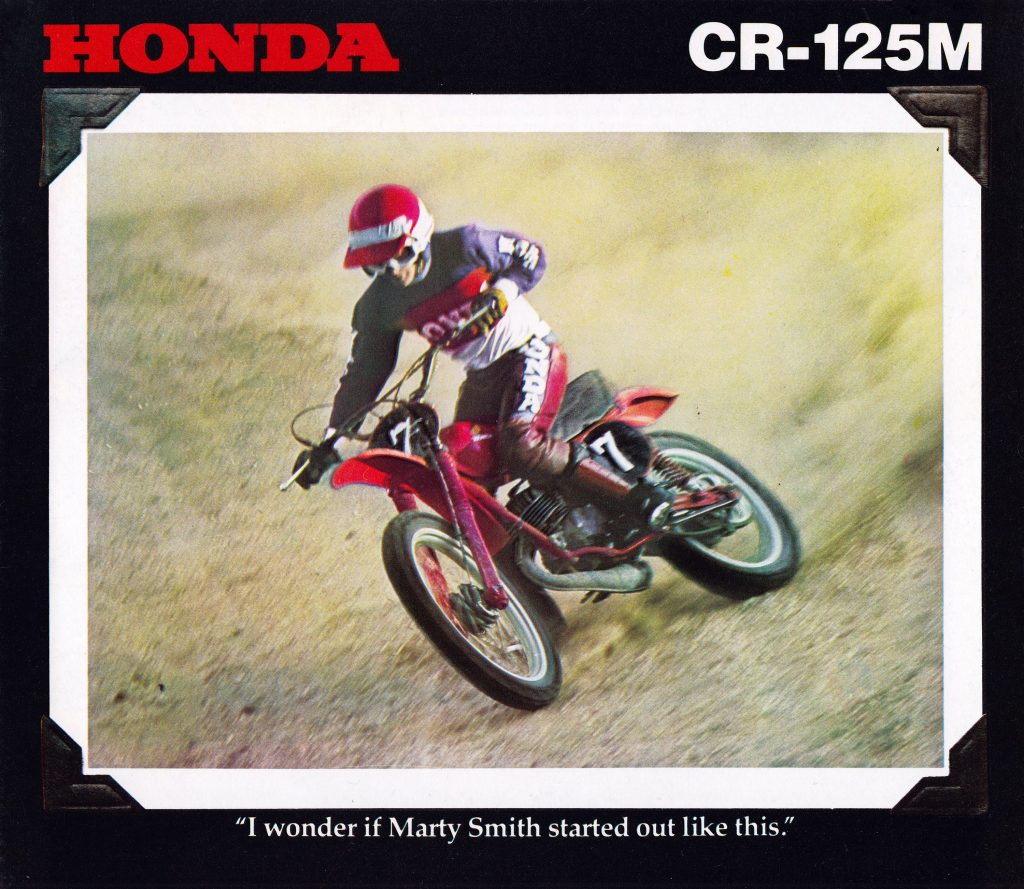 By 1978, the long-in-the-tooth CR125M Elsinore was no longer a legitimate title contender in the 125 class.

Unfortunately for Honda, however, that advantage turned out to be very short-lived. With the introduction of Yamaha’s monoshock YZ125 and Suzuki’s awesome new RM125, the Elsinore was quickly shuffled to the back of the 125 pack. With long-travel shocks and advanced reed-valve motors, the yellow machines easily outpaced the performance of the short-legged and pipey Hondas. 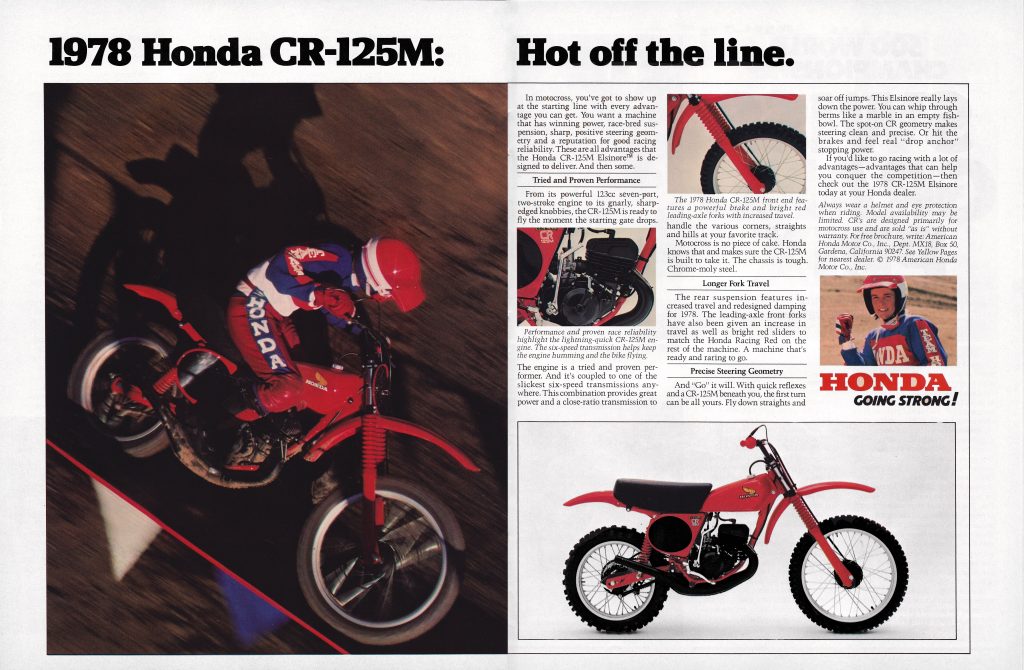 By 1978, the discrepancy between the CR and its competition had become almost comical. For the first few years after the Elsinore’s debut the sales had continued to be strong in spite of its quickly aging technology. Tremendous sales in 1974 and 1975 had led to huge aftermarket support for the silver and green machines. This support allowed riders to address most of the Elsinore’s weaknesses and keep up with the competition at first, but by 1978, that ship had clearly sailed. Honda’s neglect and complacency in the 125 class left them with a machine that was no longer competitive with its rivals.

By stubbornly sticking to its original design, the CR125M went from superstar to also-ran in the span of four short years.

When Dirt Bike magazine lined up its 125 shootout for 1978, they did not even include the CR125M. That would be unthinkable only a few years later, but in 1978, Honda looked to be asleep at the 125 wheel.  Without a reed valve, the CR’s power was narrow and its overall output was disappointing. The Honda’s suspension was slightly longer for ’78, but it still fell well behind the long-travel competition. With its down-pipe, stubby shocks, and old-fashioned bodywork, the Elsinore looked like the vestige from another era that it was. In an effort to woo the buying public, Honda did add a sexy coat of red paint to the fork sliders for ’78, but that was not nearly enough to fool anyone looking at a YZ or RM into thinking the CR was anything but a very tired retread. 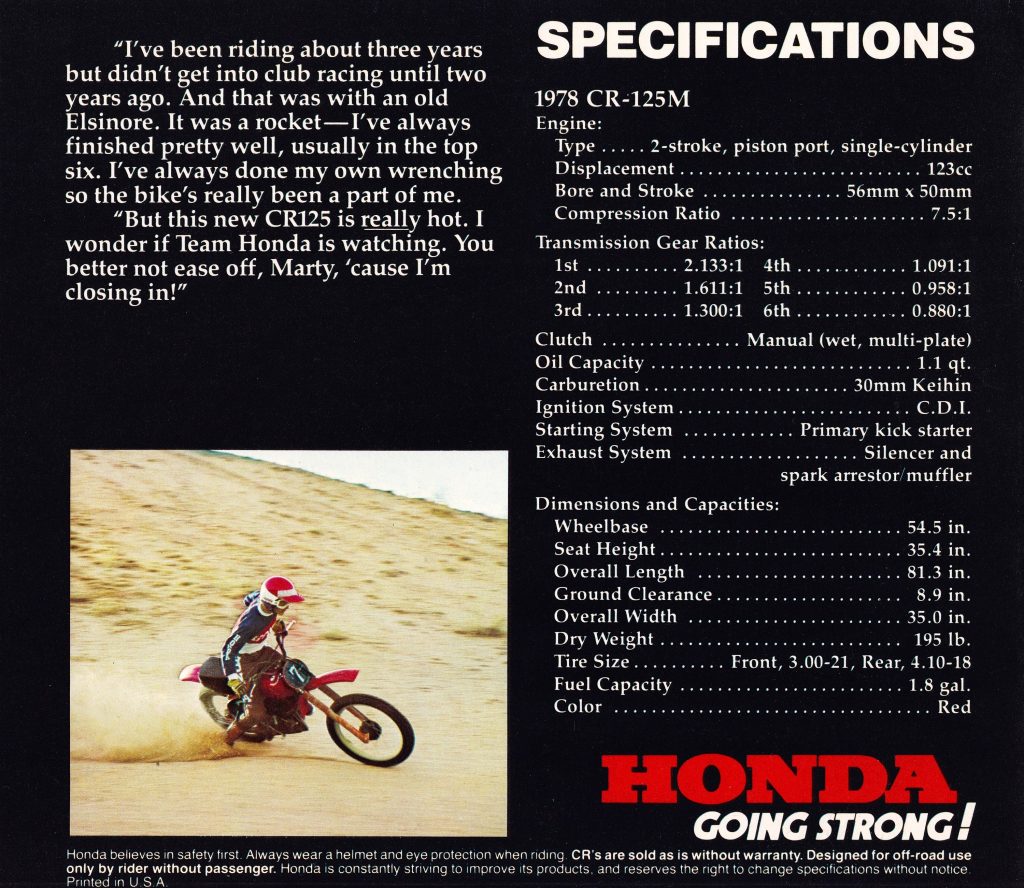 The ads said “Going Strong!” but I think most people thought Honda was going soft in the 125 class in 1978

Thankfully, Honda would come to its senses in 1979 and finally introduce an all-new CR125. The redesigned ’79 Elsinore was far from perfect, but at least it was up-to-date with its rivals. No longer the short-legged whipping boy of the 125 class, the CR was back and ready to do battle with its high-revving rivals.