For this edition of Classic Steel, we are going to take a look back at Kawasaki’s 1984 KX80. 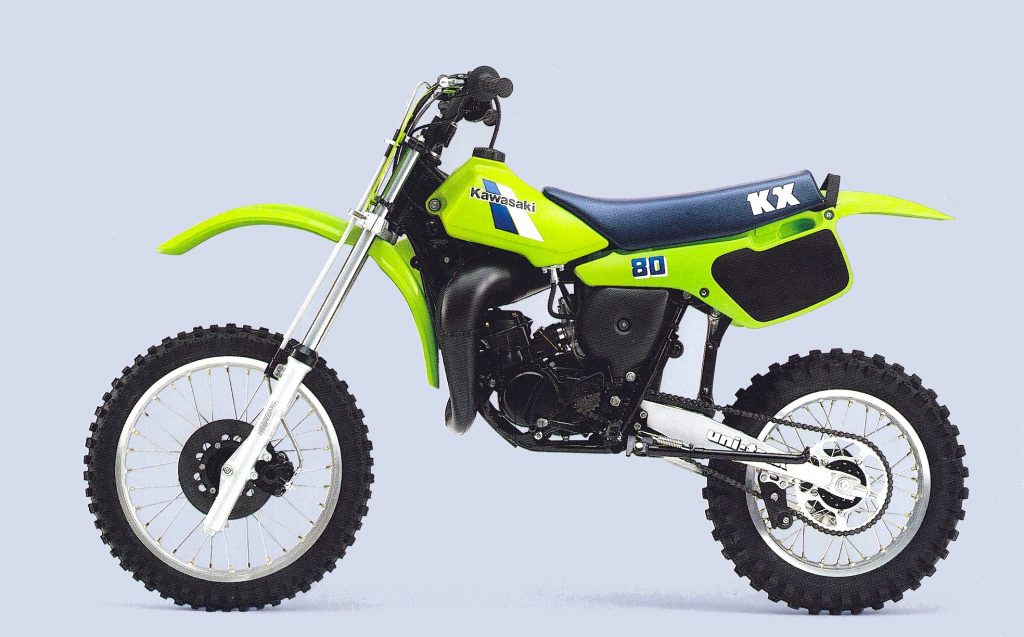 In the early eighties Kawasaki’s KX80 was the brand’s first true success story. Blazing fast and dripping with the latest in motocross technology, the rocket-fast mini introduced a new generation of riders to the joys of going green. Photo Credit: Kawasaki

Throughout the first two decades of Japan’s involvement in motocross Kawasaki was little more than a curiosity to most American riders. Despite being one of the first Japanese brands to produce a machine specifically designed for motocross, their early racing endeavors proved far less successful than their rivals. Kawasaki’s early motocross models were largely lackluster performers that failed to gain traction in the marketplace. In the later seventies, Kawasaki finally started to get serious about motocross with the introduction of the all-new 1978 KX125-A4 and KX250-A4. Only available in very limited numbers, the new A4 models proved that Team Green could compete if they put in the same level of effort they had given to their successful lineup of street machines. 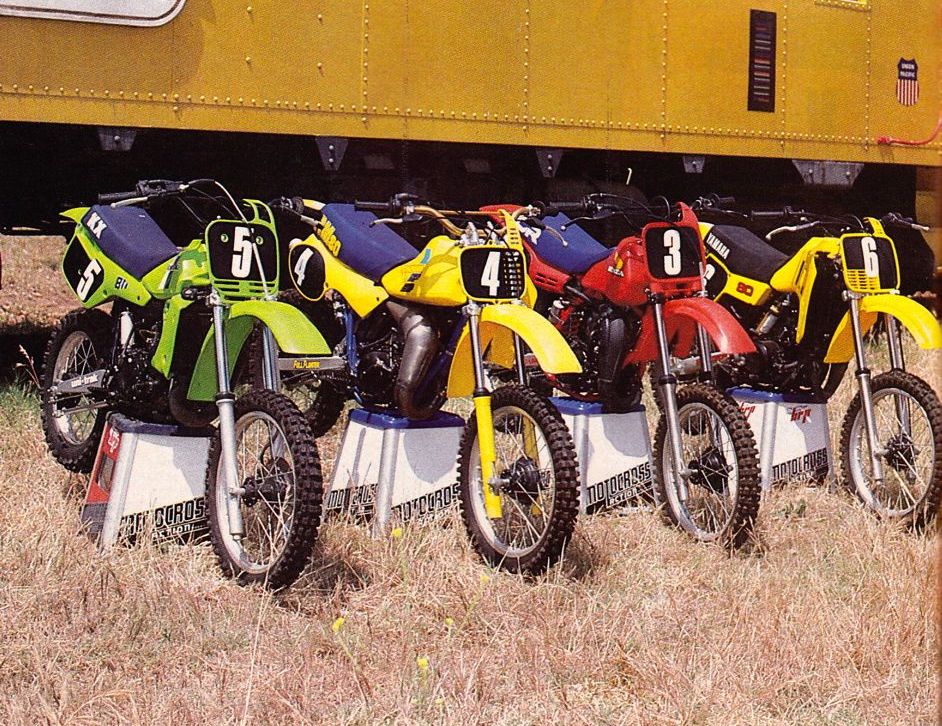 The mini lineup of 1984 was a diverse collection of machines that varied greatly in size and performance. Photo Credit: MOTOcross

While the ‘78 and ‘79 KX models showed Kawasaki was capable of competing with their rivals, the limited availability of the A4 and A5 models combined with a street-focused dealer network continued to hinder their efforts to gain traction with motocross consumers. In 1980, Kawasaki

introduced its first mini designed specifically for the motocross market, the all-new KX80. While not a world-beater, the introduction of the KX80 and its bigger brother the KX420 signaled that Kawasaki was getting far more serious about the motocross market. 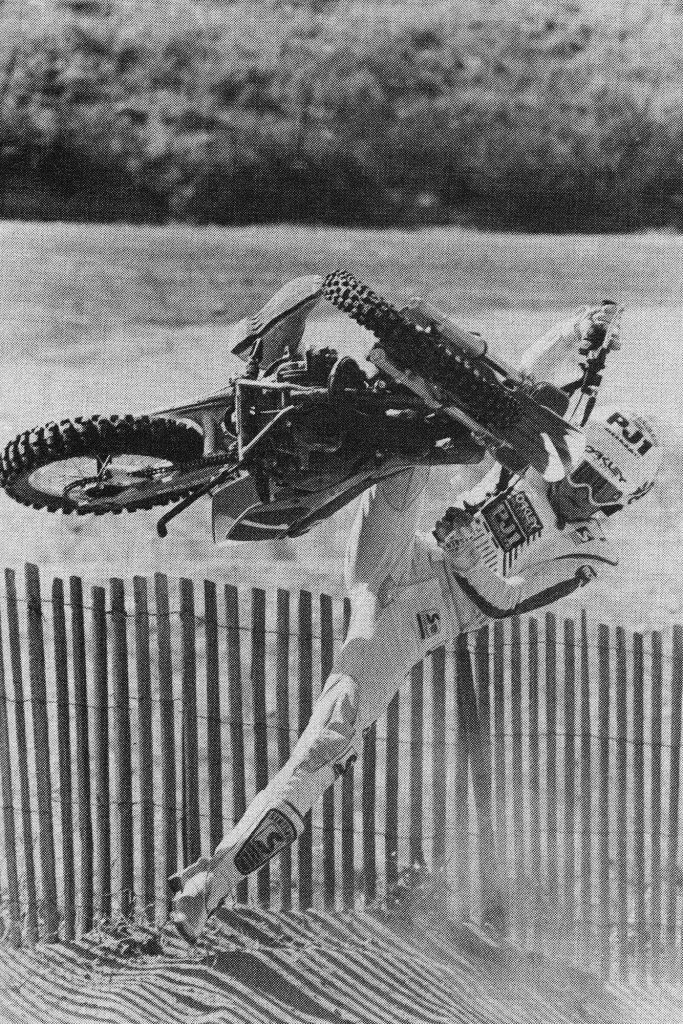 With its powerful motor and roomy layout it was easy for experts like Craig Canoy to push the limits on the KX80 in 1984.  Photo Credit: MOTOcross

While the larger KXs continued to struggle to make a dent in the market share of their rivals, the new green minis began to lure parents away from the yellow and red machines. Strong motors with broad (for a mini) powerbands and advanced technology highlighted the KX minis of the early eighties. These fast but easy-to-ride motors made the KX80s an attractive choice for both novice and experienced riders alike. 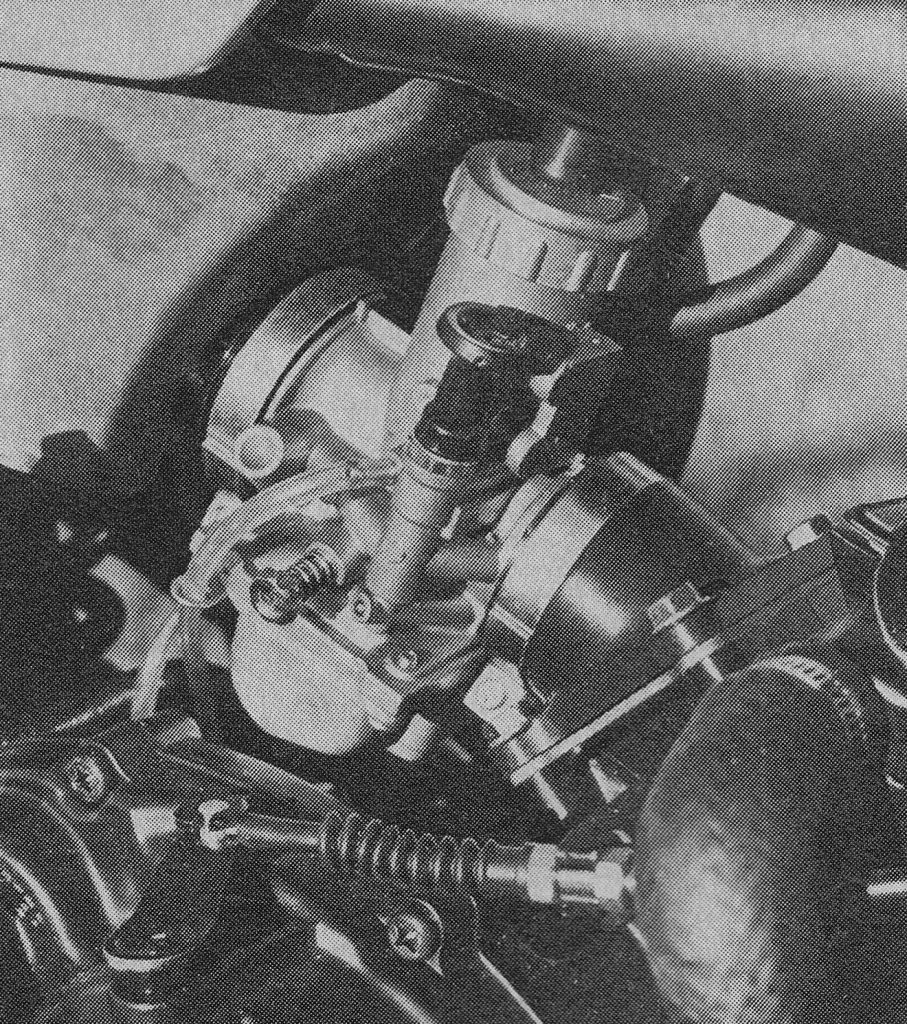 By 1984, the KX80 was firmly entrenched as the machine to beat in the 80cc division. An all-new machine in 1983 brought liquid cooling, long-travel suspension, and the slickest styling in the KX lineup. With its sano looks, state-of-the-art chassis, and powerful motor, the KX80 dominated mini-class racing in 1983. 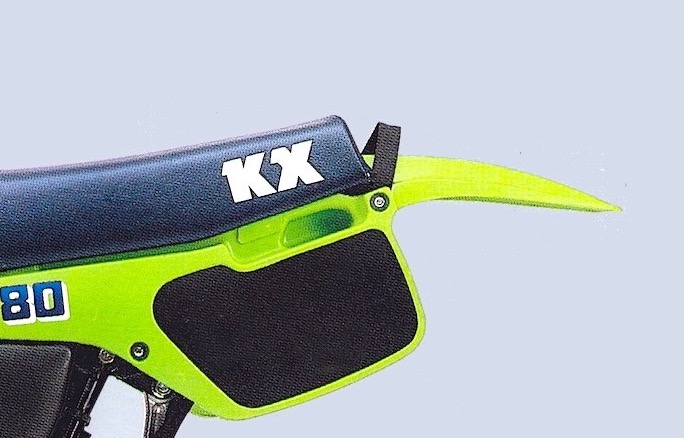 Convenient grab handles built into the side plates and a bolt-on lifting strap showed Kawasaki’s attention to details on the KX80. Photo Credit: Kawasaki

For 1984, Kawasaki looked to capitalize on its success by refining the winning 1983 package. Cosmetically, the ‘84 KX80 looked very similar to the ’83 model with the only major visual clues being the switch from black to blue for the seat and an all-new disc brake for the front. This disc was very big news in 1984 with many full-size machines and all of the KX’s 80cc competitors still using drums front and rear. This additional stopping power gave the KX80 a distinct advantage going into turns that were hard to overcome. All of the bodywork was a carryover from 1983 but most riders liked the styling and feel of the KX the year before and it remained one of the most attractive machines in the class. Some smaller riders had an issue with its slightly larger feel, but this allowed the KX to suit a wider range of ages without feeling too cramped. 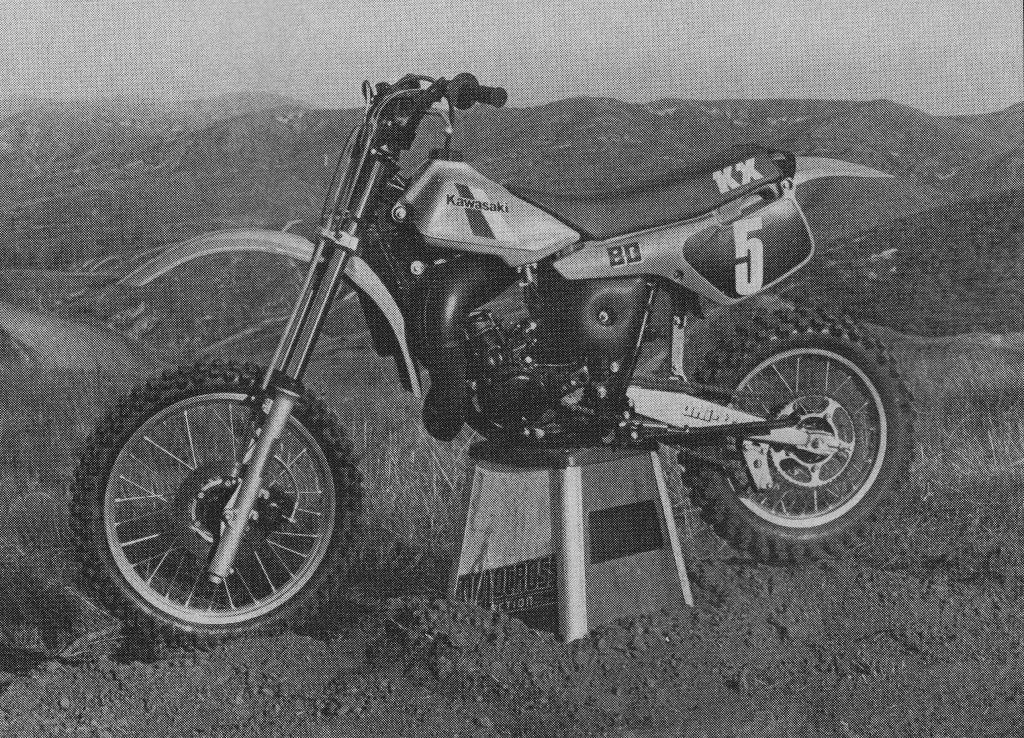 Faster and larger overall than its mini competitors, the KX80 was the choice for older and larger kids in 1984. Photo Credit: Minicycle Magazine

On the chassis front, the KX80 remained largely unchanged from 1983. It retained the same steel frame and “dog-bone” style Uni-Trak rear suspension as the year before. While painted to look like aluminum, the swingarm remained manufactured out of steel. Travel in the rear was set at 10.0 inches and the Kayaba shock offered adjustments for spring preload and rebound damping. Up front, the ’84 KX80 employed an all-new 33mm Kayaba air-adjustable fork that was slightly larger in diameter and said to offer a more progressive stroke and less stiction than the year before. Like the shock, the forks offered 10.0 inches of travel, but they did lack the external adjustments available in the rear. 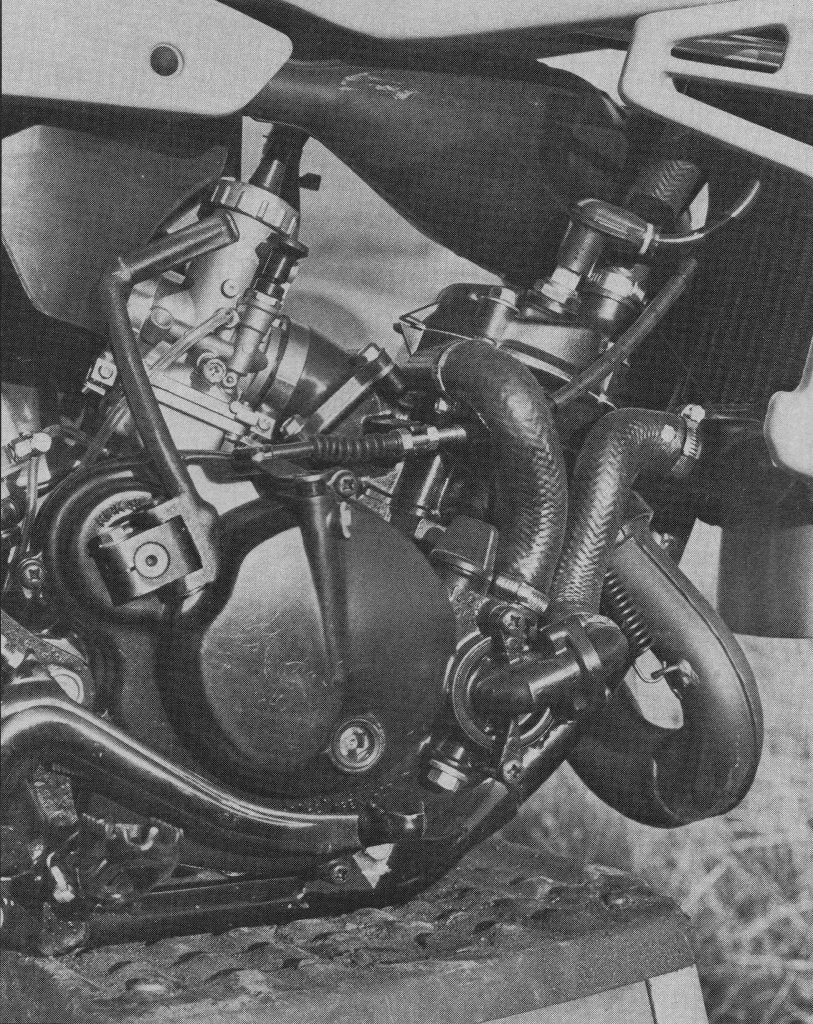 In 1984, this was the monster motor of the mini class. The KX80’s 82cc mill barked off the bottom and pulled like a pint-sized freight train through the middle. Top-end thrust was fairly pedestrian, but for most riders, it offered the best combination of power and ease-of-use in the class. Photo Credit: Minicycle Magazine

In 1983, the real strength of the KX80 had been its class-leading motor. The KX’s chassis and suspension performance were mid-pack, but its motor was omnipotent. In a class where narrow and peaky power was the status quo, the KX’s broad and strong powerband was all but unbeatable. For 1984, Kawasaki was careful not to mess with success by focusing on minor refinements to their liquid-cooled powerhouse. Internally, the motor retained its 48.0 x 45.8mm bore and stroke and 82cc of displacement. New porting was added to boost low-end response and an all-new 29mm “oval-slide” Mikuni carburetor simplified jetting by ditching the proprietary “reverse-flow” jets of 1983. Refinements to the reed valve and airbox also looked to further broaden power by improving the airflow into the tiny motor. Finishing off the motor changes for 1984 was an all-new alloy silencer that saved several ounces over the steel unit of 1983. 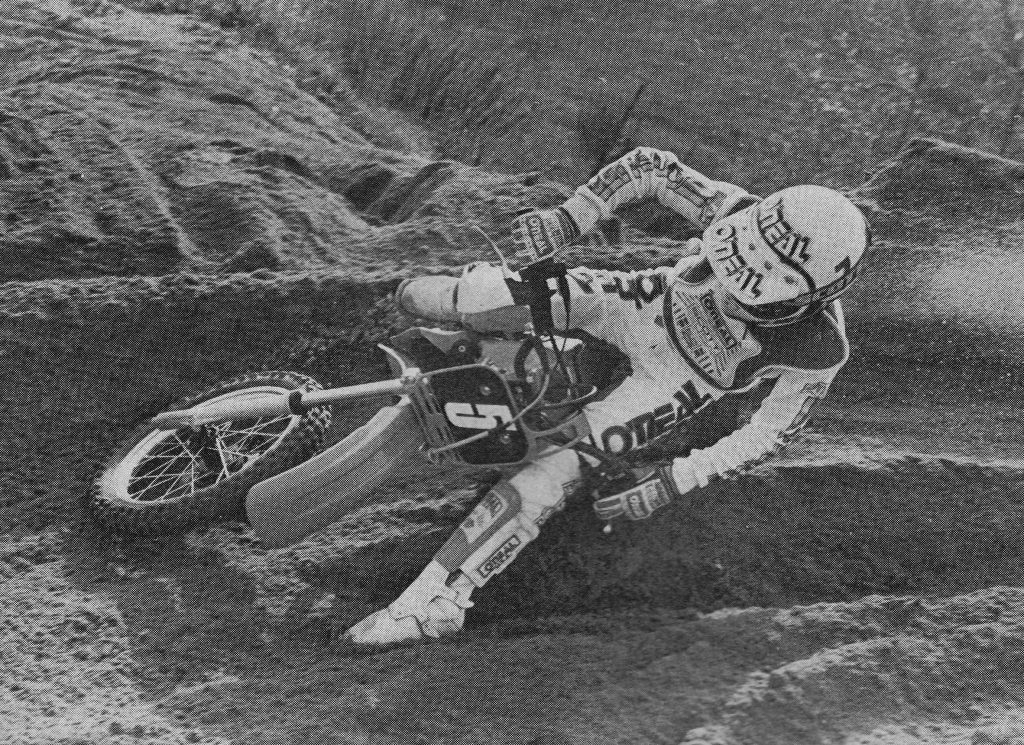 While not blessed with the best handling on the track, the KX80 could be made to carve impressive arcs with a talented rider like Eddie Hicks on board. Photo Credit: Minicycle Magazine

On the track, the 1984 KX80 was once again the class of the field in the motor department. Its 82cc mill pumped out the strongest low-end and midrange power and pulled the farthest overall. It positively rocketed out of corners and left the other machines in its dust. On the top end, it lost out to the high-rpm shriek of the RM80, but by then the KX was long gone. It was both incredibly fast and easy to ride. It offered superior low-end torque for the newbies and a brawny midrange burst for the fast guys. Mini experts might have wanted a bit more pull on top, but for 99% of the mini pilots in 1984 the KX’s motor was a winner. 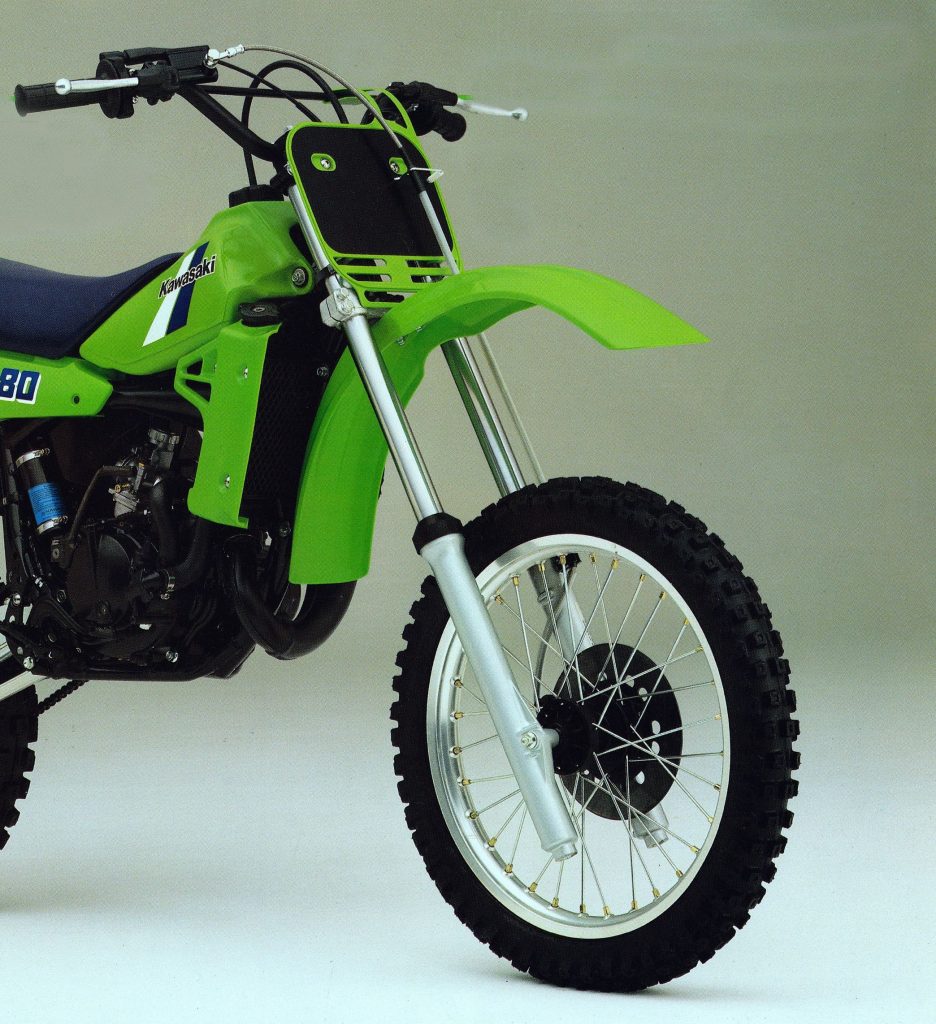 While impressively large compared to the flexy sliders found on some of its competition, the KX80’s 33mm Kayaba forks featured settings out of step with the machine’s potential. Undersprung and underdamped, they were far too soft for anyone big and fast enough to make the most of the KX’s larger size and powerful motor. Photo Credit: Kawasaki.

Past the motor sweepstakes, the competition got much tougher in 1984. As delivered from the factory, both the fork and shock settings were very soft on the KX. Considering the KX was both the largest and fastest mini in the class, this seems like a strange choice for a machine aimed at more experienced and older riders. Both ends bottomed severely if pushed and the forks dove appreciably when the powerful front disc was applied. The shock was also slightly quick on the rebound and prone to kicking in the whoops. Smaller kids probably appreciated the soft stock settings as it allowed the larger KX to settle more and get their boots on the ground, but fast kids were surely going to need stiffer springs and some oil fiddling to get the suspension up to snuff. 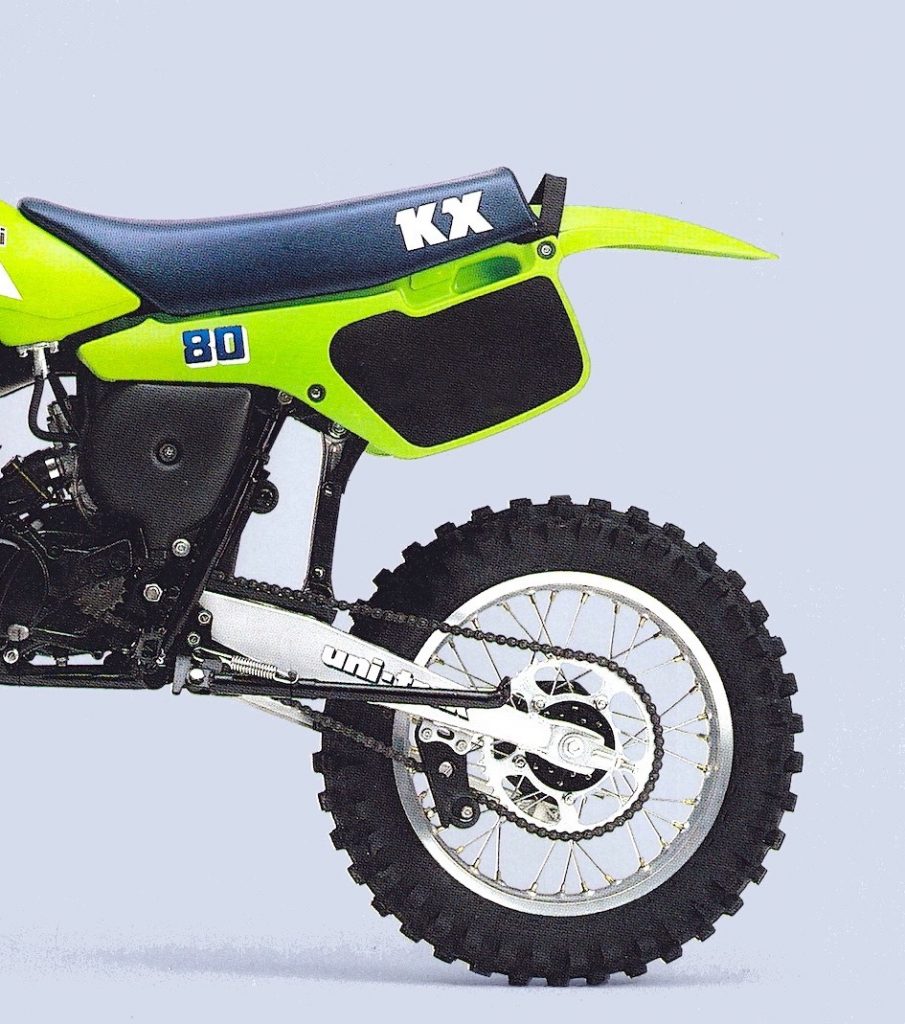 As with the forks, the KX80’s Uni-Trak rear suspension was too soft and underdamped in 1984. Hard hits bottomed it out and sharp impacts led to kicking in the rough. While still raceable for most kids below the expert class, true throttle jockeys were likely to need an upgrade. Photo Credit: Kawasaki 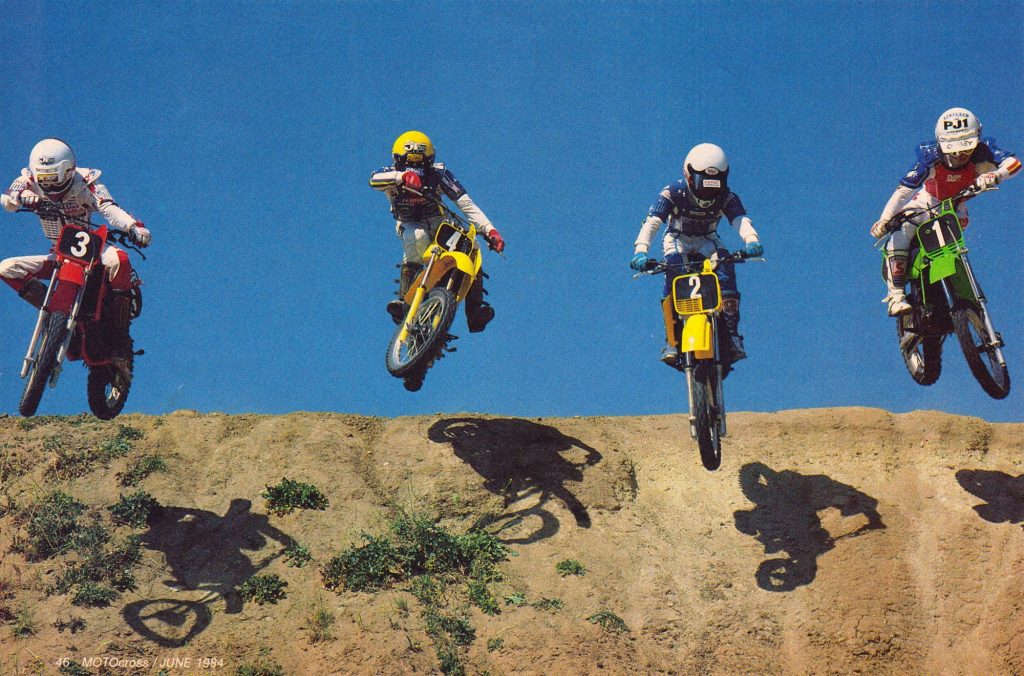 In 1984, the Honda and Kawasaki offered the largest layout for older kids, with the Suzuki catering to small-fries and the Yamaha splitting the difference. Photo Credit: MOTOcross

On the handling front, the KX was once again a middling performer. With the soft stock suspension, the front end dove in corners and tended to wash the front wheel on slick turns. Under power the rear squatted, and the front wheel danced skyward as the powerful motor launched the KX forward and taxed the underdamped shock. At speed, the KX was not prone to headshake, but its lackluster suspension gave the bike an unsettled feel. All three of its competitors ranked higher in the handling categories but if you got the suspension sorted the KX became much more livable. 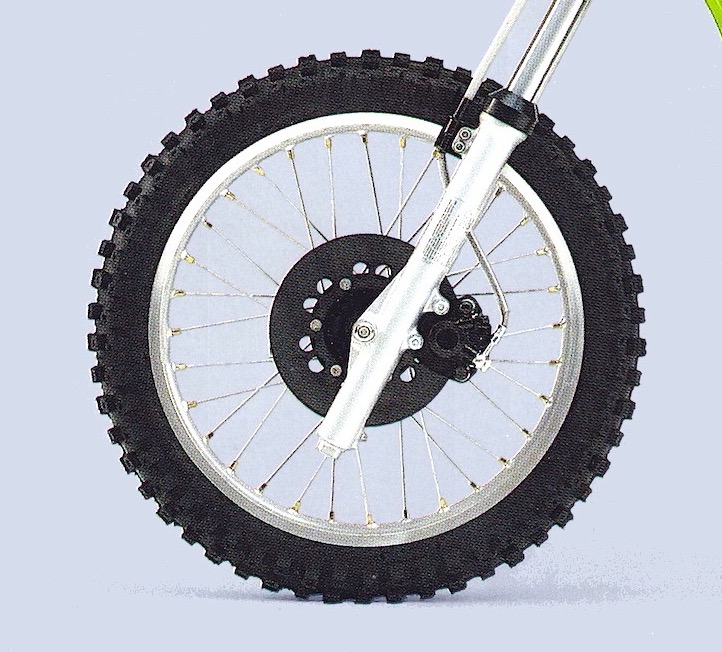 The KX80’s new hydraulic disc brake gave the green machine a significant braking advantage over the drums of the competition in 1984. Photo Credit: Kawasaki

On the detailing front, the 1984 KX80 was considered good for its time. The bodywork looked great and older riders loved its roomy ergonomics. The blue “safety” seat made sliding forward in the turns easy and dads appreciated the convenient handhold and grab strap built into the bodywork. About the only complaint riders had was with the stock bars which MOTOcross magazine compared to a pair of bull’s horns. They were too tall and wide and nearly everyone hated their bend. The stock front disc worked flawlessly once broken in, but it took several rides to burn off the anti-corrosion coating Kawasaki installed at the factory. This left several testers questioning the brake’s performance initially before the coating finally wore off. Some bikes also suffered from annoying air leaks that caused the KX to pop on the top end. This was a well-known Kawasaki issue at the time and hunting down these air leaks was part of the KX “experience.” Aside from these quibbles and the marshmallow stock suspension, the KX was an ultra-competitive machine. 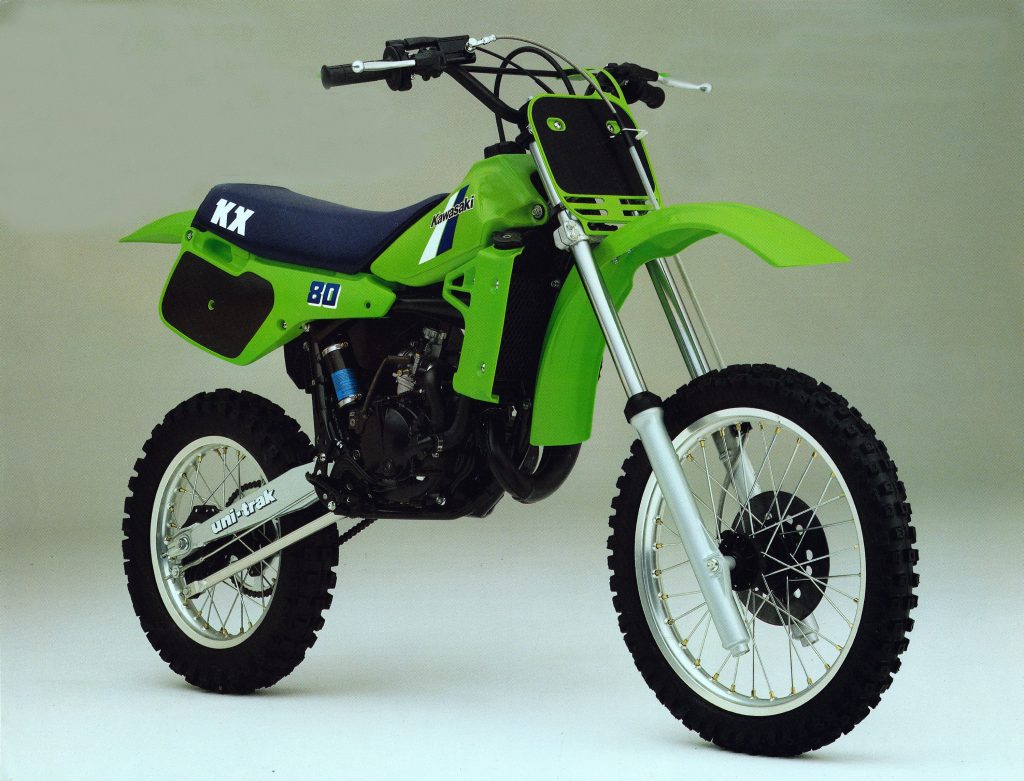 In 1984, Kawasaki completed a three-year run of mini dominance by once again offering a monster motor housed in a rather pedestrian chassis. If handling and suspension were your priorities, then a yellow or red machine was probably a better choice. If, however, you were into pulling holeshots and throwing rooster tails on your competition, then the KX was your machine. On a 250 or 500 class machine, the KX80’s handling and suspension inadequacies would have been enough to torpedo its chances at victory, but in the cutthroat mini class, the little green meanie’s motor domination was more than enough to offset its lack of handling finesse.