This week I’ve got a special ‘team manager’ edition. Instead of looking at rider stats, I’m diving into rider lap times. Lap times can be used by team managers to evaluate rider performance throughout a weekend and season. Team managers can evaluate a riders speed, fitness, and the most important thing for winning races and championships, the combination of speed plus fitness.

There’s a quote attributed to Mitch Payton – “we can work with speed”. For a manager of a 250 team, that’s very true. Mitch is recruiting and fostering young talent and he believes if they have the raw speed, the Pro Circuit Kawasaki team can provide them a bike, the training, and support to develop into a rider that has both the speed and fitness to win races and championships. Given the number of championship plates on Mitch Payton’s trailer door, the formula seems to work.

Let’s dive into the data and see who had speed, fitness, and speed+fitness in Was

In the first 450 moto, Chase Sexton set 4 of the 6 fastest lap times. Think about this for a moment… 4 of his 16 laps were faster than all laps of 36 of the 38 riders in moto 1! Chase’s 4 fastest laps ranked 1st, 4th, 5th, and 6th fastest. Chase got the holeshot and was able to put in some great laps in the first half of the moto. Simply put, Chase had the most speed in moto 1. 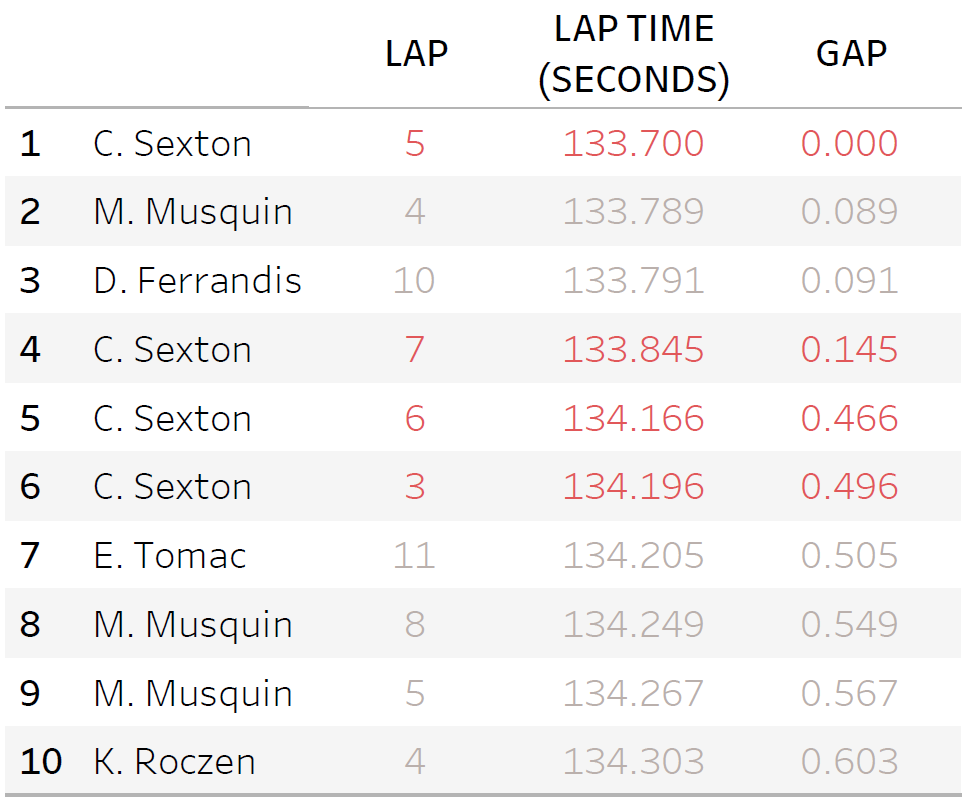 It’s also worth noting that Chase was one of – if not thee – the most consistent riders in moto 1. The difference between his fastest (2:13.7) and slowest lap (2:17.4) was 3.7 seconds. Only Eli Tomac (2.4 seconds), Justin Barcia (2.7 seconds), and Dylan Ferrandis (3.4 seconds) were more consistent. Upon closer inspection though, with a 10 second lead and 2 laps to go, Chase backed it down and his lap times slowed (see chart below). Had Chase maintained his pace from the previous 7 laps (2:15’s), the difference would’ve only been 2.1 seconds, not 3.7 seconds.

Net, net, Chase Sexton won moto 1 with a combination of speed+fitness even though the raw numbers don’t exactly show it.

There’s a lot of ways to measure fitness. I reached out to Dylan Dahlquist, Sports Scientist at the Red Bull Athlete Performance Center LA and asked him about different ways to measure fitness. He highlighted 2 different areas of fitness measurement – aerobic capacity and strength. He said “Ultimately it depends, but for moto, it’s a combination of overall aerobic capacity and one’s ability to be robust enough (read: strong enough) to handle the insane amount of stress that comes with maneuvering a heavy bike around an undulating and forever changing track in erroneous conditions. The way to capture fitness is different on the bike versus in a lab. In a lab, you can use a fancy metabolic cart to capture one’s ability to uptake and utilize oxygen. In the field, we can use surrogates – a heart rate monitor, maybe a pill that determines how much heat a rider is generating and a few other gadgets to dictate overall internal (and external) strain. For strength, same things apply – but these determinants would be more readily available off the bike then on the bike. Such as investigating one’s grip-strength, their muscular endurance (e.g., max-pull-ups, max-arm-hang, etc.), or one’s ability to absorb force via high-tech force-plates.” He finished with a smile and said “It’s a quagmire.” It’s always fun to talk with Dylan and I learn something new every time. Unfortunately, I don’t have access to any of the rider fitness data (hit me up riders!) but I do have their lap times and lap times are another way to measure fitness in the field.

While speed is measured based on the fastest lap time, fitness can be measured by how consistent a rider’s lap times are across the entire 30 minute + 2 lap moto. In the case of Washougal, we’ll look across the 16 laps for each moto.

A more advanced way to measure fitness via lap times is using a Whisker Box Plot.  Below you can see the Top 10 in moto 1 again. I won’t explain the full details on how to interpret a Whisker Box Plot here, but what’s important to notice is the tightness of the box. The tightest box shows the rider with the most consistent lap times across the entire moto. Note how tight Eli Tomac’s box is versus Ken Roczen’s. This shows that Eli was able to put in very consistent lap times the entire moto. On the other hand, Ken’s lap times were inconsistent across the moto and likely due to his fitness being compromised because he was sick. 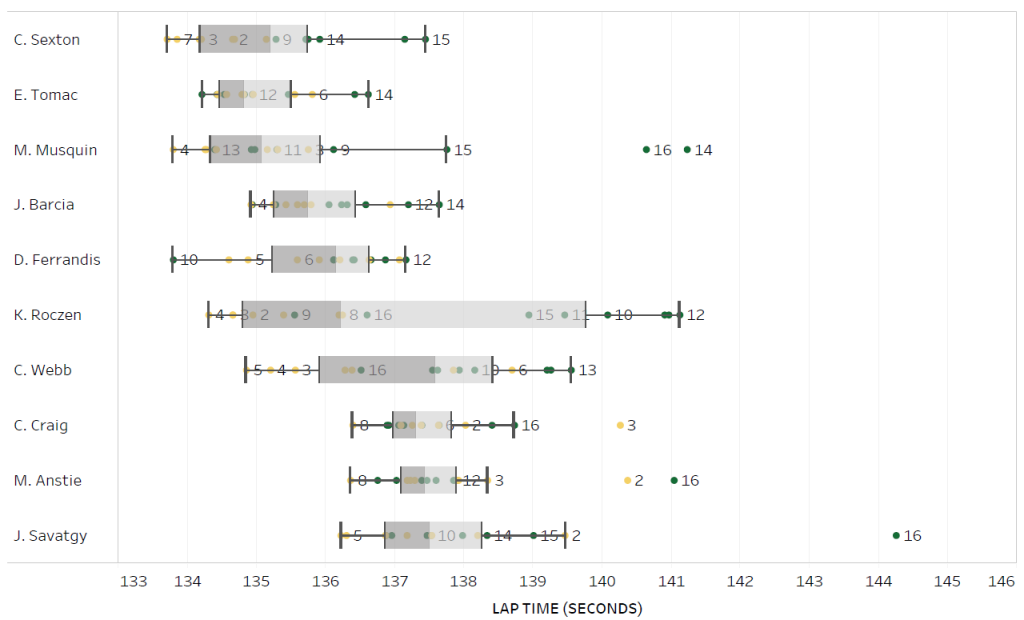 We’ve looked at speed. We’ve looked at fitness. But the most important thing for winning races and championships is the combination of speed+fitness. For that, we’ll look at the second 450 moto where Dylan Ferrandis and Eli Tomac put on a speed+fitness clinic.

In the second moto, Dylan Ferrandis got the holeshot and led wire-to-wire, but it wasn’t without significant pressure from both Chase Sexton and ultimately Eli Tomac. Chase Sexton held his own in 2nd place but when Eli Tomac passed him on lap 13 of 16, he punched out and his lap times dropped significantly as highlighted by a 2:19 lap time (139 seconds). 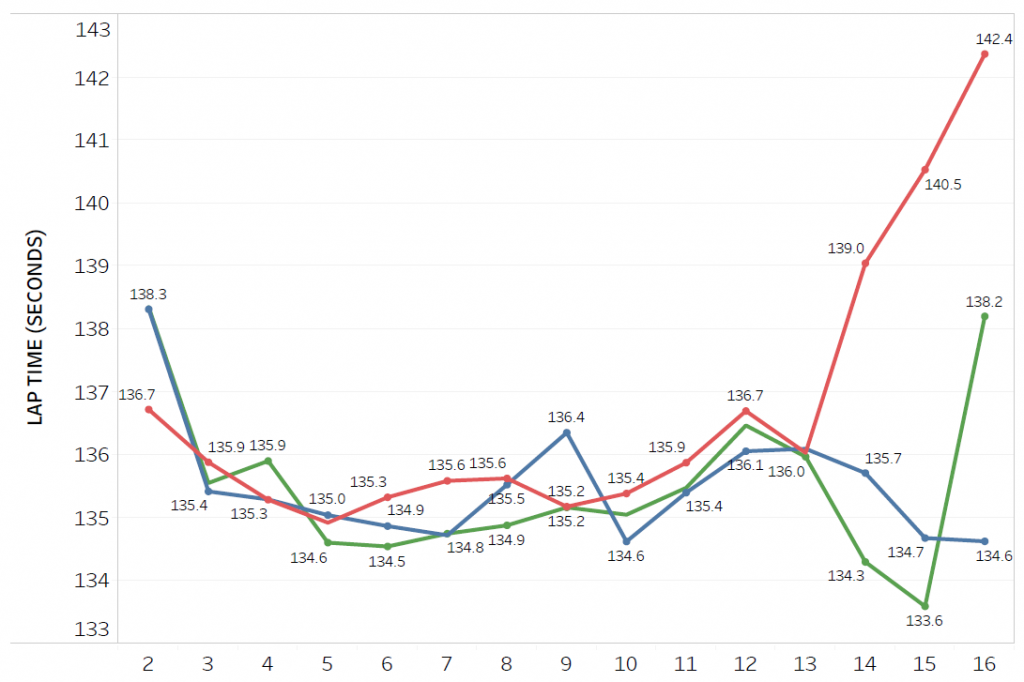 That’s when an epic battle between two fierce competitors with a combination of speed+fitness unfolded. In the last 3 laps of the last moto of the day when the track was at its absolute roughest, Dylan and Eli combined for 4 of the 7 fastest laps of the entire moto. The most impressive thing was Eli Tomac setting the fastest lap of the weekend by almost a full second on the 2nd to last lap!

Below, you can see how Eli Tomac cut 1.4 and 1.1 seconds out of Dylan’s lead in laps 14 and 15. Tomac was impressive and Ferrandis was able to respond as they pushed their limits at the end of the moto… and let’s remember it was 91 degrees! 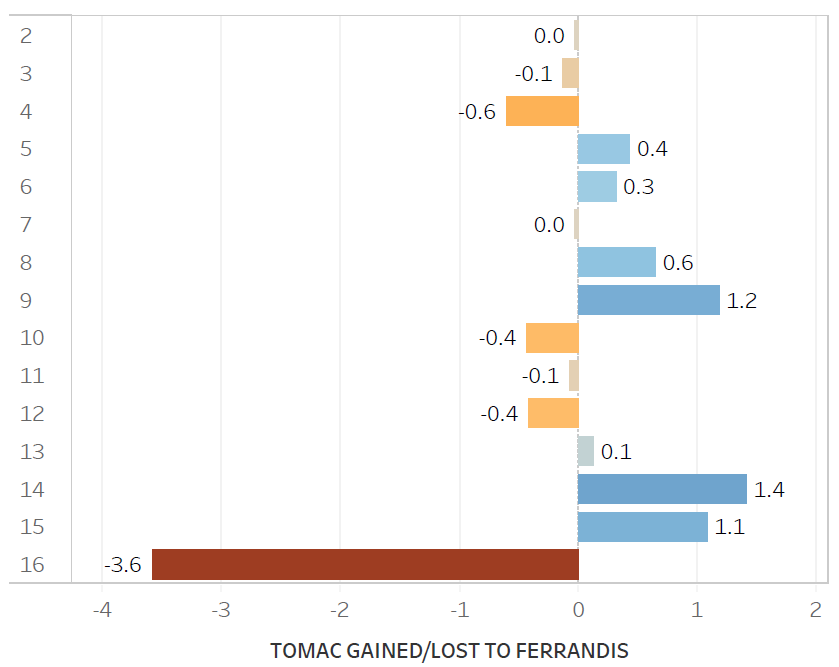 These guys were not only fast, they were doing it at the end of the day when they should be the most fatigued. Chase Sexton said it best in a post-race interview with Michael Antonovich, “These guys never seem to get tired”.

To put a fine point on Dylan Ferrandis and Eli Tomac’s display of speed+fitness, they set the 10 fastest laps of the second moto! 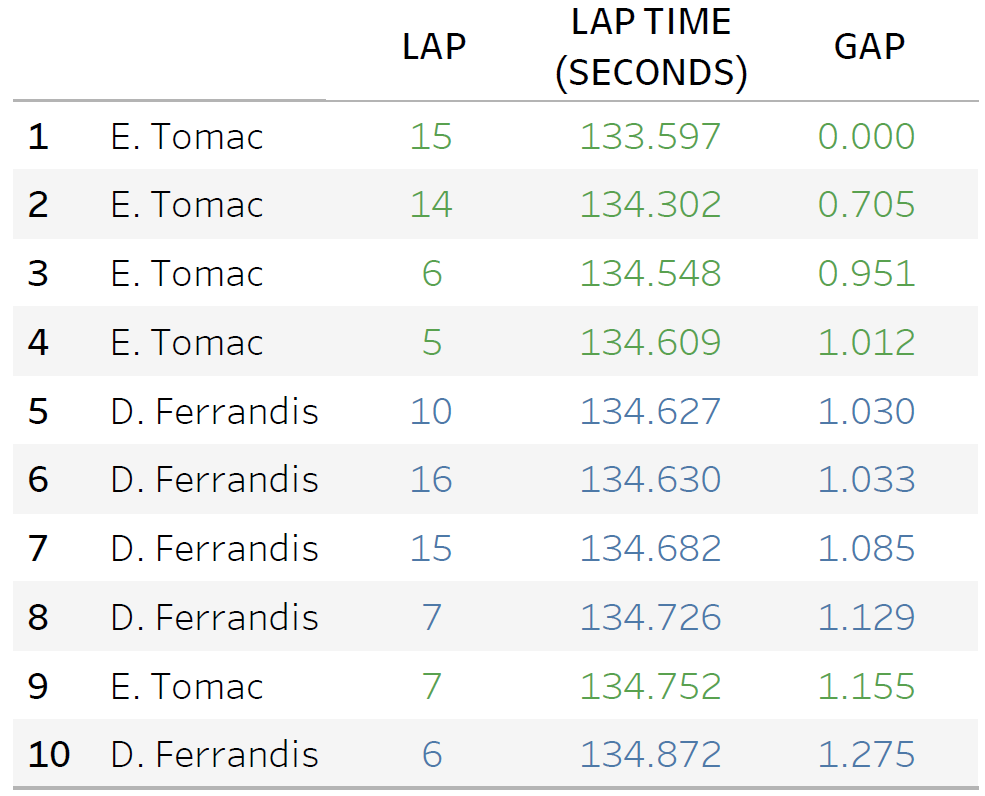 If you’re a team manager and want weekly analysis for your riders and/or competitors, send me an email at clinton@3lapsdown.com. If you’re a fan and want to bench race, head over to Twitter or Instagram and follow @3lapsdown.